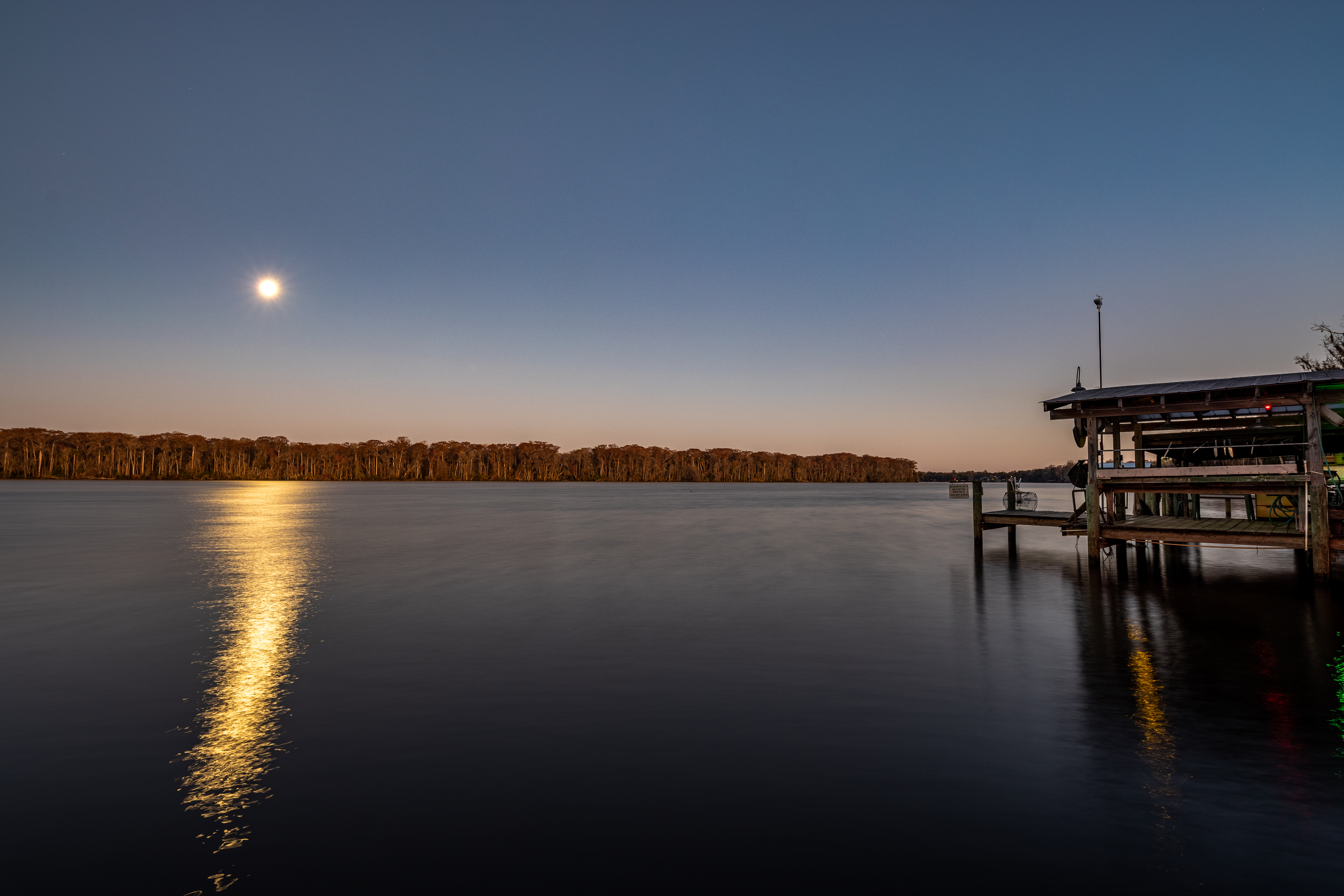 In a state that boasts hundreds of diverse fish camps, this storied 75-year-old gem still shines in its charming simplicity.

On a recent cold morning, as the dense fog lifted from the tannin-darkened dusky waters of the St. Johns River, Bill “Woody” Woodcock set his line, dropped his rod and reel into a holder on the dock at Stegbone’s Fish Camp and stood back to take in the wide expanse of the massive waterway.

Woodcock, from Pennsylvania, settled in at the camp in January for a three-month stay. His cabin is nestled between a handful of others on the spacious grounds. 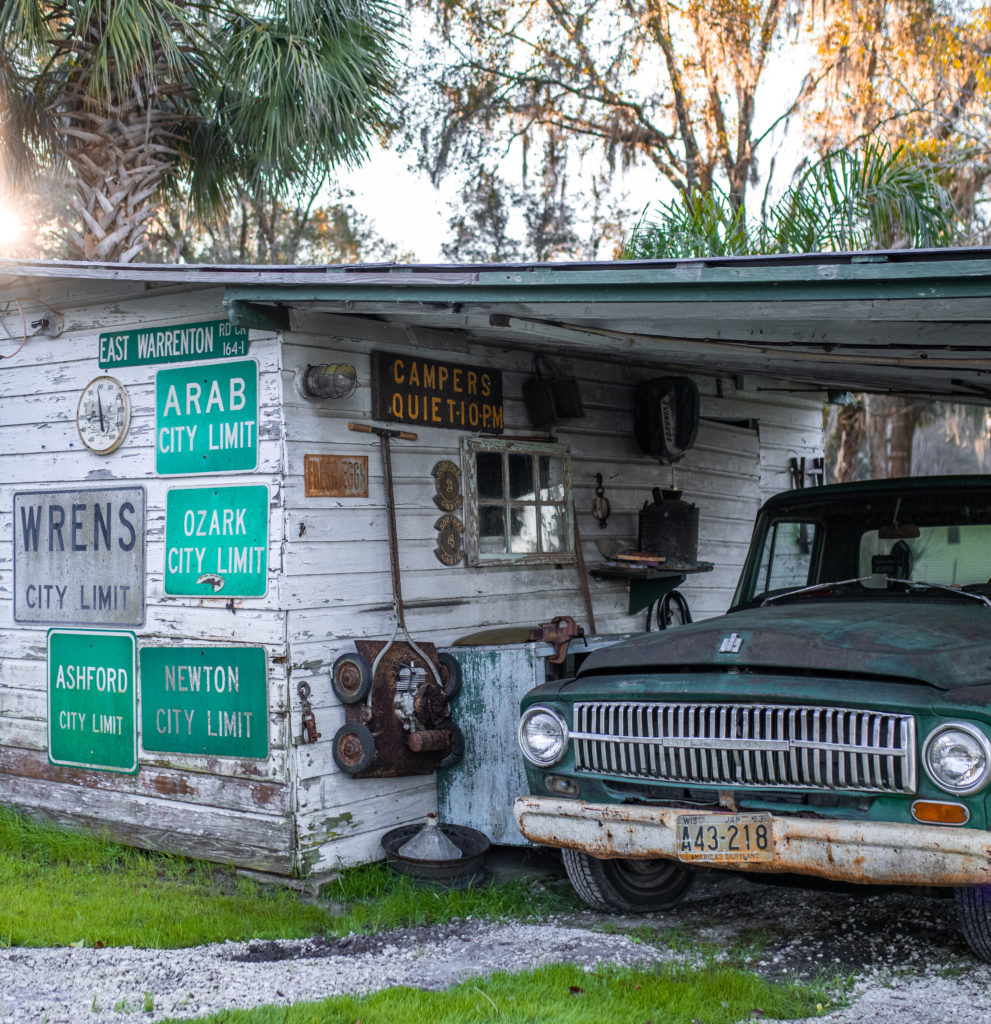 The authentic old Florida fish camp, between Satsuma and Welaka in Putnam County, just south of Palatka, was established 75 years ago. Remnants, including the first cabin built by Bob Allender in 1946, still hint at Bob’s Camp, built on land carved out of orange groves. Allen Norton bought the property in 1972 and renamed it Norton’s Place. It was purchased by current owner Jim Stege in 1998. Thus, the name Stegbone’s, from his nickname as a student at the University of Florida. In a nod to his affinity for all things “old Florida,” the camp is awash in historical signage. At the top of the hill overlooking the sprawling dock is a “Christmas” pine tree planted by Norton the first year or two he was there, which still towers over the fire pit and multiple seating areas.

Fishermen, such as the “Kentucky Boys,” who arrive in March, come to pull in loads of bream (bluegill, warmouth, stumpknocker, red belly, shellcracker), crappie, perch, shad, catfish and several species of bass, along with anglers such as John Nicholson, who has been coming there from southwest Georgia for 40 years. 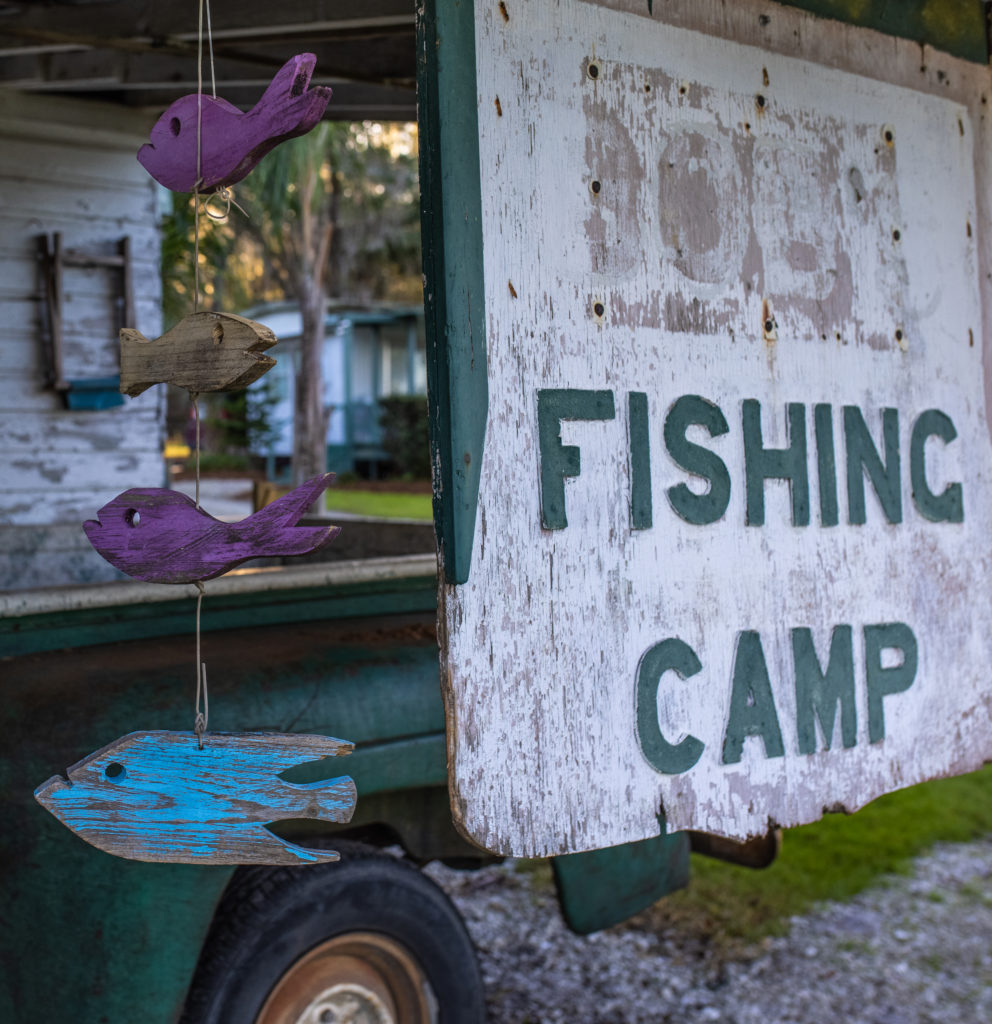 Whatever the haul of the day is, the cleaning station at the dock is outfitted for quick scaling and is equipped for plugging in a deep fryer and chowing down right on the spot. The five cabins, which can sleep from two to eight people, all have kitchens and are stocked with dinnerware and cooking utensils. For those who don’t bring their own boats, the camp offers one for rent.

And if you aren’t intent on catching fish, you can always just take in the quiet, pierced occasionally by a bird’s call or the splash of a frog, and enjoy the serenity of watching the river roll north towards Jacksonville and the Atlantic Ocean.

The St. Johns River is one of the few that flows from south to north. It begins as a marsh in Indian River County and ambles 310 miles northward, becoming broader and deeper as it goes. At Stegbone’s, the river is bordered on the west side by the upper reaches of the Ocala National Forest; just to the south, it is bordered in part by the Welaka State Forest on the eastern shore.

Jim Stege was born in Madison, Wisconsin. He says he has traveled the world but has a true affinity for the Sunshine State. 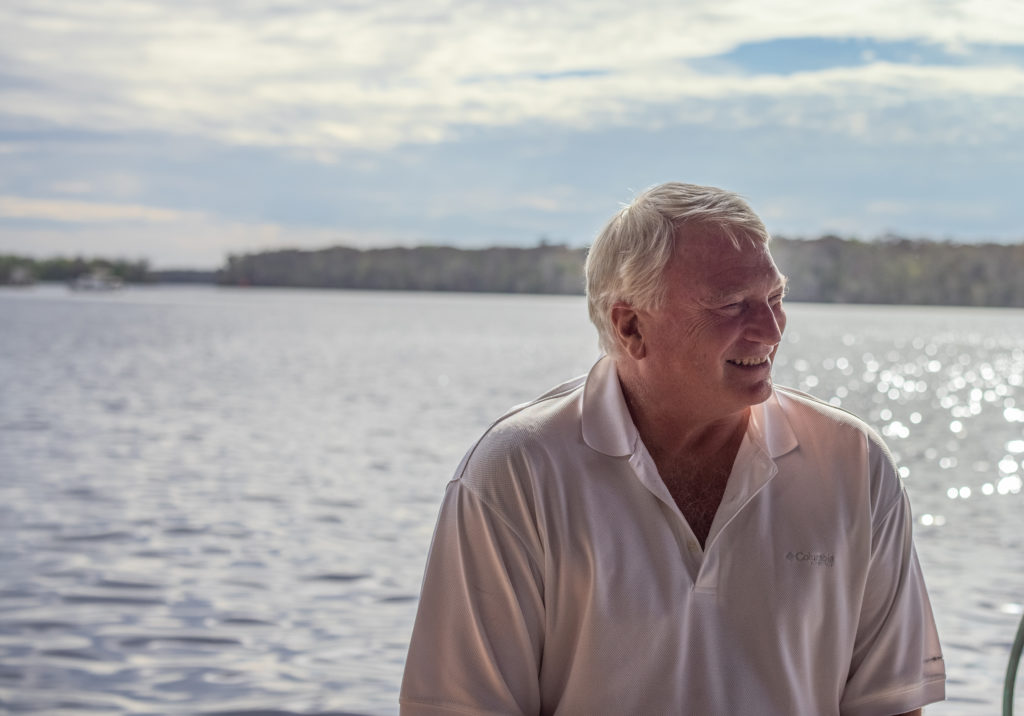 “I went back to school at age 29 to study architectural preservation,” he shares. “Back in 1984-85, I got a 1927 road map and went all over Florida on back roads looking for old gas stations. It really gave me a love for old Florida—and what we’re losing so quickly. I just got this feeling that I understood Florida.”

When he was ready to get out of Gainesville after 20 years and moved to St. Augustine, where he opened a sandal shop, he also found “this place.”

“It was a mess, but I have put everything I could into it and for 22 years have been working hard to not change that old Florida feel,” he offers. “We are low key. We’ve still got guys who are 70 years old and have been coming here since the early ‘50s.”

He notes that about 70 percent of the income comes between March and June, “when the bream fishermen are looking for the beds.”

“The Kentucky Boys come in early March. They have their prizes and awards for most fish or biggest fish, and they bring their Hudepohl and Schaefer beer and play horseshoes or cornhole and sit around the fire in the rocking chairs and tell lies,” he states, bursting into laughter. “And then there’s families, like John Nicholson’s. 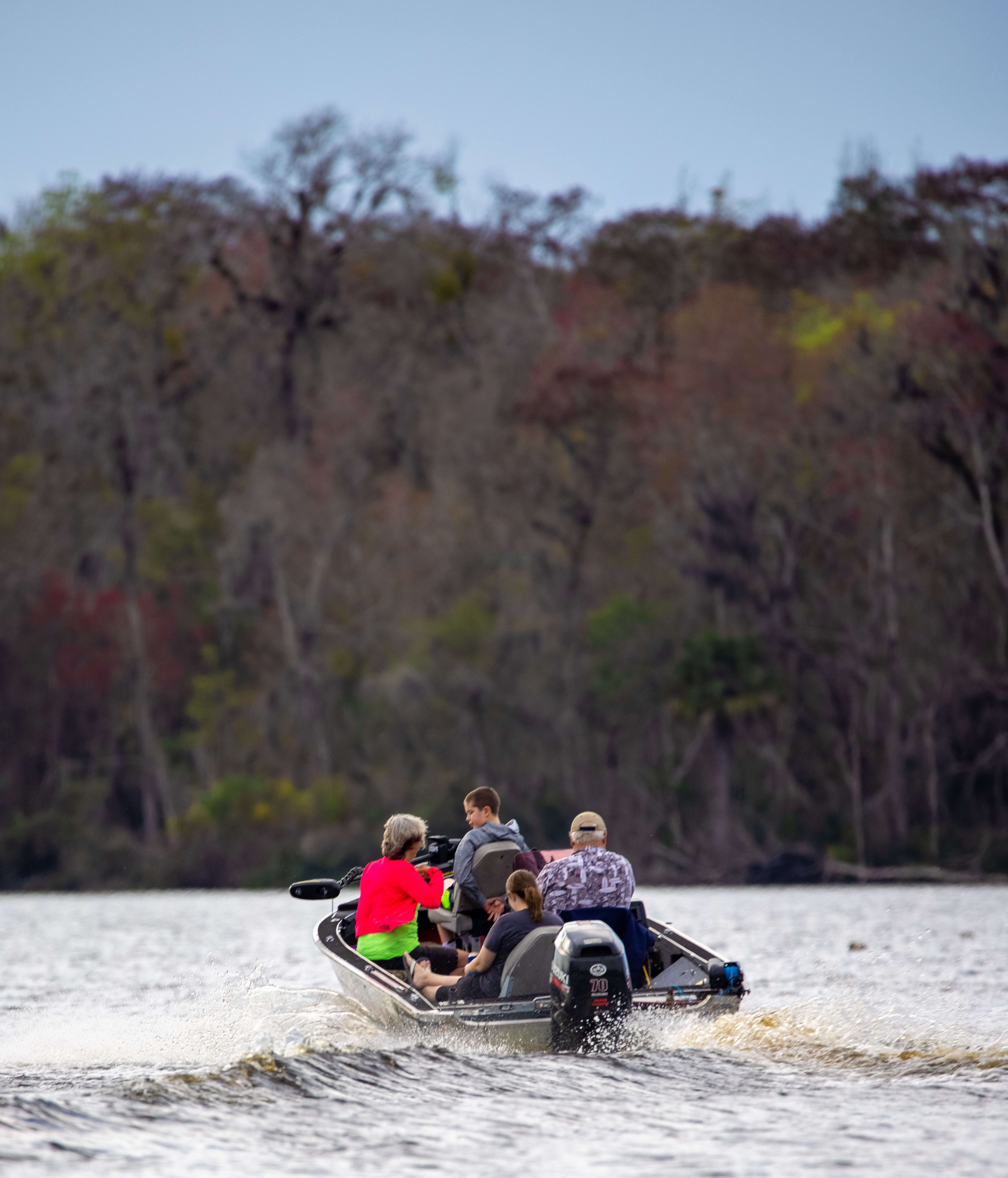 There’s a chair in cabin number three with all their names on it on brass plaques.”

Nicholson, reached by phone at his home in southwest Georgia, says the numbers in his group have dwindled over the years but he still relishes any chance to make it down. He recalls glory days of fishing for “anything that’d bite… bream, shellcracker, red bellies. They are good size, in fact excellent size, and in good numbers. And they think they are monster bass,” he notes with a chuckle.

Nicholson authored the Fishing on the St. Johns page on Stegbone’s website, which describes the fish and how to catch them (crickets, he offers, are the secret to panfish).

Stege has been reading a book given to him by Nicholson, Rose Cottage Chronicles, which details letters between two lovers from 1856-65.

“They were writing about this property, which was part of a plantation,” he states. “After the Civil War, the south is poor, land is cheap, people need jobs. Yankees were tired of winter and came down here and did a lot of citrus farming.”

Stege says part of his dock has pilings that date back to the 1870s, when citrus was plentiful. 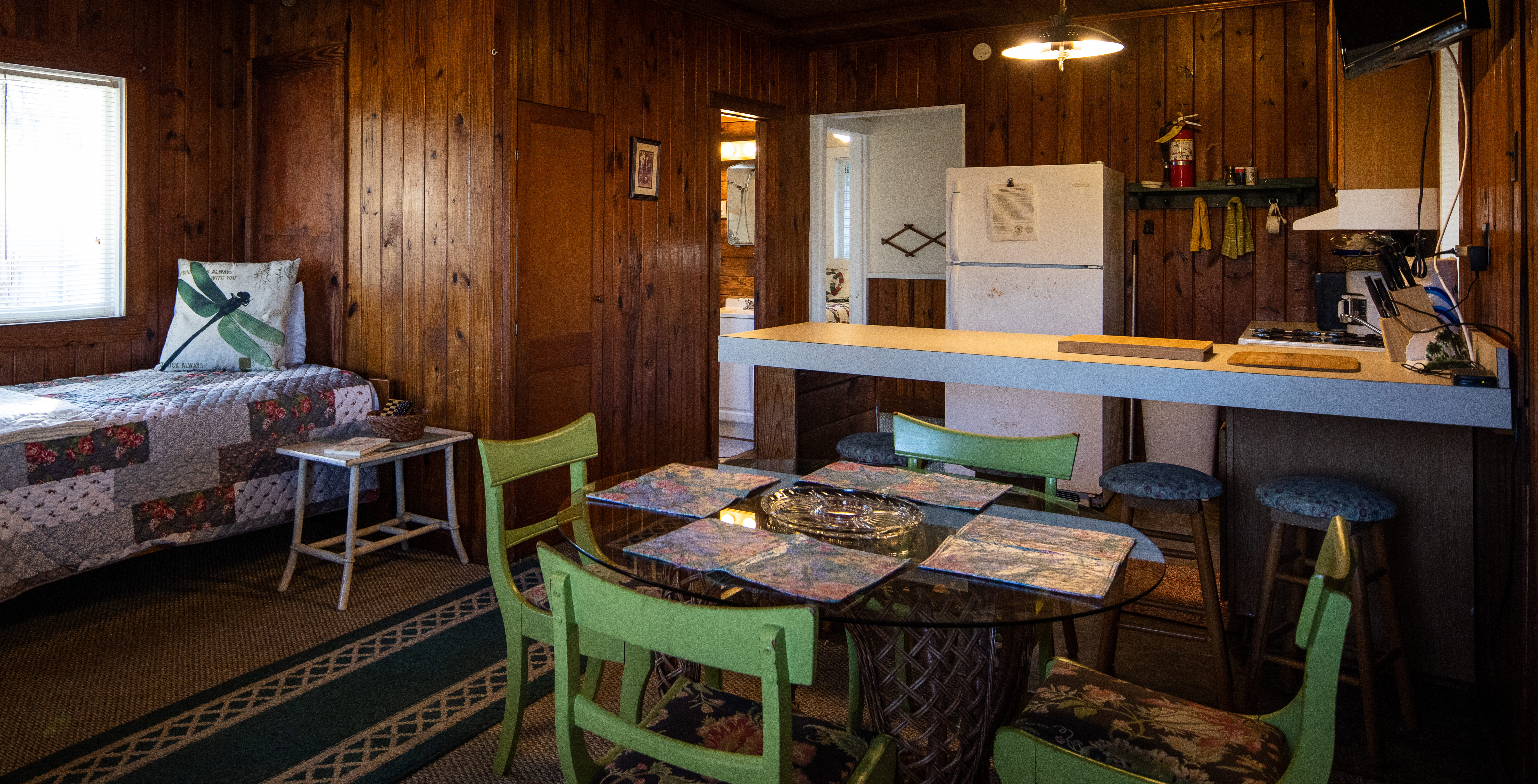 “The paddle wheelers would load up citrus and head back up river and exchange in Palatka to deep sea vessels, and later railroads,” he states.

Stege recalls learning about the times when “northern financiers” would sail south and then attach their skiffs to wooden boats in Palatka that would take them on local rivers past the “big hotel in Welaka, the spas, huge cypress and all the plumage birds. Palatka was where you turned to see the wonders of Silver Springs and Ocala.”

“In 1946, the dock was still here and Bob saw the potential after the war (World War II),” he offers. “And that was when people could finally relax a little bit and take a vacation.”

As time marches on, Stege says, “youth aren’t picking up fishing like in the past” and that has meant that some change has come to his fish camp. 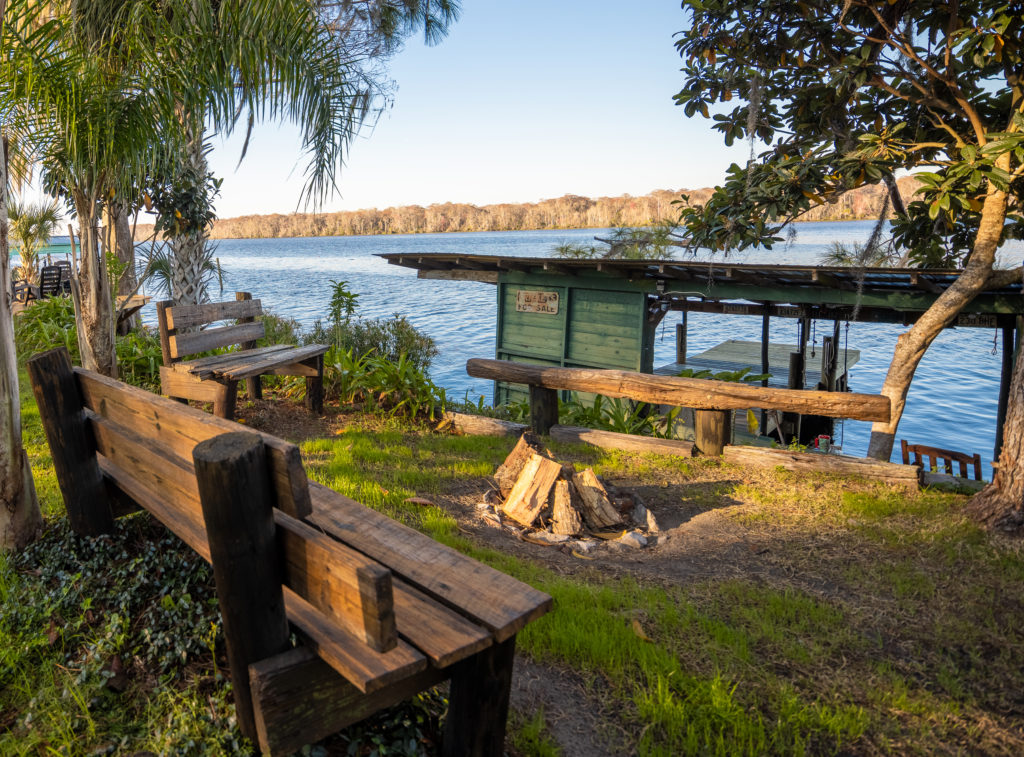 He explains that, in order to make the camp more accessible, they have updated the cabins without sacrificing the old Florida feeling, so women and kids can also enjoy the experience.

“We get more weekend getaway type folks to mix with the fishermen,” he remarks. “We love this as a place for people to come together and respect each other and have a good time and enjoy nature. The families that come are ecstatic.”

He motions in the direction of his 1966 International 900A pickup truck, which he stills drives, noting that “nothing is for show around here; everything has got to work for its living.”

“And we still have a 1993 workhorse golf cart we’ve repaired so many times I could have bought three of them,” he shares. “I just like having the old things around and keeping them going. That’s sort of the nature of this camp. I think it’s important that everyone grab on to something meaningful—especially in Florida—that has some kind of lasting intrinsic value and nurture it…keep it going.”

Woodcock says that allure is what brings him to the camp. 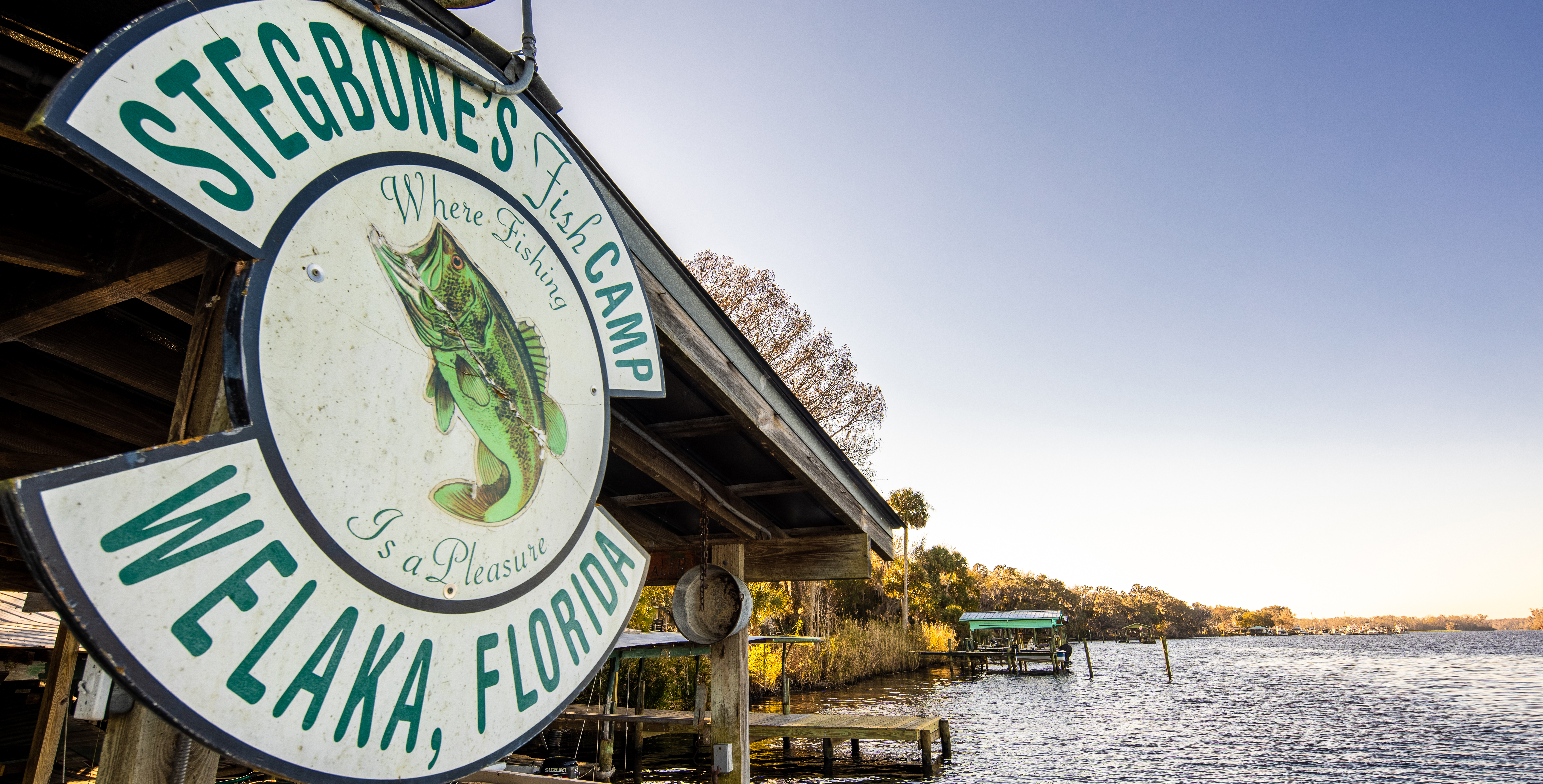 “I love old Florida,” he affirms. “My friends were worried about me coming this year. I said ‘I’m going on a three-month quarantine. I’m going to live, not be sheltered in my house.’”

He says the people are friendly in the south and that Amazon delivers anything he needs. Plus, there are local eateries nearby, such as Mema’s Family Restaurant, which serves “pancakes as big as wheel covers.”

Nicholson says he can’t wait for clearance after receiving the COVID-19 vaccine to make it back to the fish camp this year.

“So much was missed last year by everyone,” he says softly. “I’ve only missed coming to the fish camp twice in 40 years, including last year. But that’s all right. It’ll be there when we get back.”

For information about fish camps around the state, go to florida-backroads-travel.com/florida-fish-camps