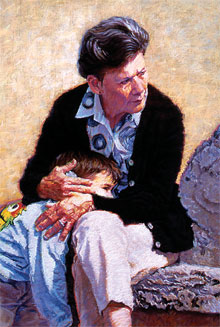 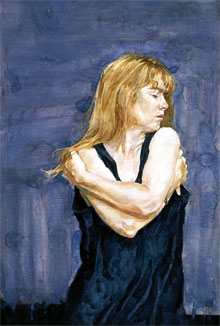 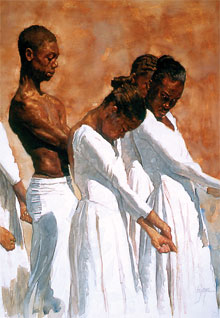 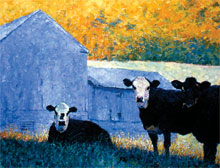 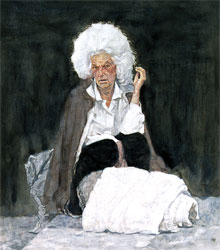 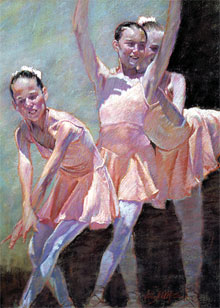 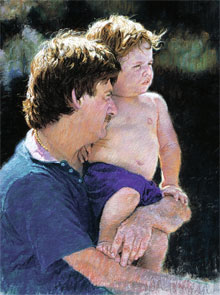 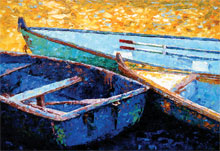 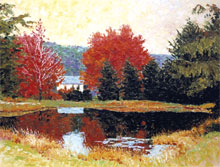 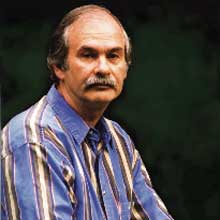 Stories don’t necessarily require words. Just ask Bill James. Since high school, this artist has been telling stories through his paintings. From childhood, James always loved drawing and painting. Growing up in Forty Fort, Pennsylvania, a small town near Wilkes-Barre, he began painting with oils and pastels when he was just a teenager. A high school art teacher recognized his early talent and encouraged him.

“She had a lot of faith in me,” recalls James. “That encouragement made me want to follow art as a career.”

James went on to study at Syracuse University and graduated with a Bachelor of Fine Arts degree in 1965. It was at Syracuse that James met his wife Jo Ann; the couple has been married for 41 years.

After graduating, James worked as an illustrator for almost 22 years, producing a wide variety of work for advertising agencies and publishers that ended up on posters, record covers, and in books and magazines around the world. Living in Miami at the time, he worked locally at first, but then went with an artist representative in New York, which opened doors to more interesting work.

Throughout those years, James was also painting for his own pleasure. Many of the courses he studied in college — watercolors and oils, printmaking, technique — came into play on these projects.

“I did my own artwork to save my sanity. Some of the art directors I worked with in the early years thought they knew what a great piece of art looked like, but didn’t,” remarks James, who began entering his work in shows while still working professionally as an illustrator.

His work began winning awards and garnering attention, and in 1987 he decided to focus solely on his own work as a fine artist. Since that time, his paintings have won numerous awards and have been featured in art magazines and books. He was also invited to become a member of the Knickerbocker Artists, an art association consisting only of master artists, without the customary showing of a portfolio.

“Since 1947,” notes James, “only one other artist has been inducted into the Knickerbocker Artists without showing a portfolio.”

James paints a wide range of landscape and human subjects, always working from photos he has taken himself.

“Finding a unique subject and photographing it is half the fun of painting. I take my camera to festivals, fairs, art shows, reenactments, wherever I go,” James admits. “You never know what you’re going to see. Many of my landscapes are from photos I took in Virginia. There are so many interesting barns and tree formations there with all the change of colors in the fall. I could probably paint for the rest of my life from photos I’ve already shot.”

He experiments with depicting certain moods by using different color schemes and improving the subject design, if need be. He particularly enjoys getting an emotional response from the viewers of his paintings.

The subject tells him what medium to use. Landscapes are primarily done in pastels or oil, while he tends to paint people using pastels or watercolor. Sometimes, he will paint the same subject in two different mediums just to see the results. The majority of his landscapes are filled with bright colors, which is why he tends to avoid watercolors for these subjects. The brilliant gold, orange, and crimson of autumn seem to almost vibrate on the surface of these paintings.

His pastel style is unique in that he applies colors to the surface side by side, or on top of each other, until he achieves the desired effect. He used many different watercolor styles and surfaces to arrive at his current technique of working layer over layer with transparent gouache. He paints on either illustration board or cold-pressed watercolor paper coated with gesso. He also utilizes the techniques of “scumbling” and “glazing” to accomplish his desired result.

“I look for someone unique, whether it’s what they’re wearing or simply because of their facial appearance,” he says. “I was over on South Beach in Miami one time watching all these models parade by when here came this homeless man. I followed him and took a whole roll of film. Because of his clothes and beautiful white beard, he was interesting. That’s what I’m looking for — someone who stands out.”

His advice to aspiring artists runs along those same lines. Learn the basics, he urges, but question things and try to be different so you stand out among fellow artists.

Sometimes his paintings create real-life drama. Inspired by a homeless woman he noticed in downtown Miami one day, he painted her in somber, brooding colors (see page 74). The painting later appeared in a magazine where, remarkably, it was spotted by a relative of
the woman.

“They’d been looking for this woman and had no idea where she was,” James recalls. “They recognized her from the painting and contacted me after they saw my name in the magazine. The good news is that they actually found her. It was an amazing story.

After 40 years in Miami, James and his wife moved to Ocala in 2005. Jo Ann is a prominent breeder/owner/handler in the dog show world, and was familiar with Ocala from traveling the dog show circuit with her Doberman Pinschers. She showed many of her dogs at the Ocala Dog Show Club, not far from their present home. When the couple decided they wanted a change of pace, they knew Marion County was the place to be.

“Everything was just moving too fast down in Miami,” James says. “We wanted to slow down our lives and that’s what we got. We really love it here. Even State Road 200 seems quiet to us.”

On a typical day, he’ll help Jo Ann with the dogs in the morning (they have eight champion Doberman Pinschers), then tends to his plants. James is an avid gardener of tropical plants and recently had a greenhouse built to house the many specimens he moved up from South Florida. Working with his collection of tropical plants (there are hundreds) takes his mind off any problems, he says, and he soon plans to start a cactus garden.

Later in the morning, he will package up paintings that are being sent to galleries and shows around the country. Afternoons are saved for painting and James typically paints five to six hours a day, almost every day.

“I just like what I do,” he says simply. “As a fine artist, I get to work with any medium I want and I pick my own subject matter, as opposed to working as an illustrator where all that is decided for you.”

James has no lack of inspiration.

“I always have something on my mind I want to paint. I’m always thinking of patterns and designs, and if I see something unique, I can’t wait to paint it so other people can feel the same emotion that I have. That’s what it’s all about to me — telling a story.”