Jordan Shapot’s artistic journey has grown both figuratively and literally, from small illustrations to abstract paintings to wall murals. The latter includes residential murals and soon, those in a very special Ocala heritage park. 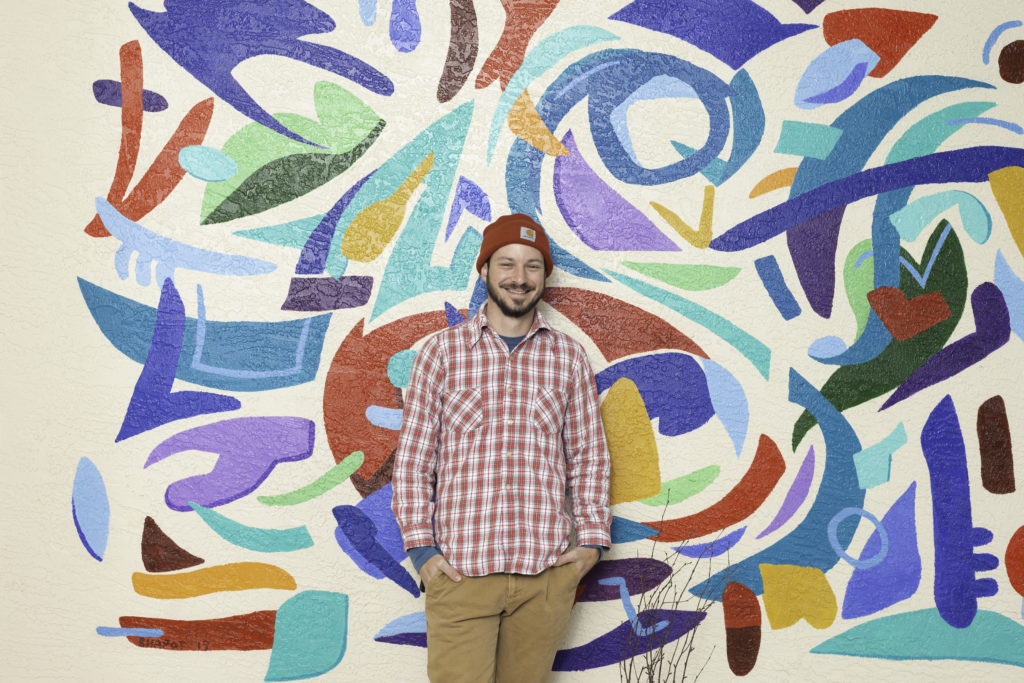 Muses come in myriad forms. For artist Jordan Shapot, his have included ninja turtles and a broken heart.

“When I was a kid, I was really into the Teenage Mutant Ninja Turtles,” says Shapot, who grew up in Citrus County. “One day, my father drew a picture of a ninja turtle for me. And suddenly I had this epiphany that cartoons were based on drawings come to life. That’s when I started thinking about being an artist.”

In high school, Shapot attended the Lecanto School of Art. He followed that with a Bachelor of Fine Arts degree in illustration from the Savannah College of Art and Design.

“After graduation, I faced the same dilemma most artists do of how to pursue art and make a living,” offers Shapot. “My solution at the time was to become a commercial illustrator. I moved to Colorado to pursue that, doing illustration work for magazines, band posters and album covers. And I was very much in love with someone at the time. So I was relatively happy.”

But as time went on, Shapot realized being a commercial illustrator was not feeding his artistic soul.

Describing the return home as a pivot point, Shapot decided to face his art head on and see where it led.

“Artistically, I felt a different energy and was drawn more to the fine arts. I dove into multiple mediums, finding my passion in oils and acrylics,” says Shapot, 32. “Then I became involved in the wonderful Ocala arts scene and things really began to fall into place.” 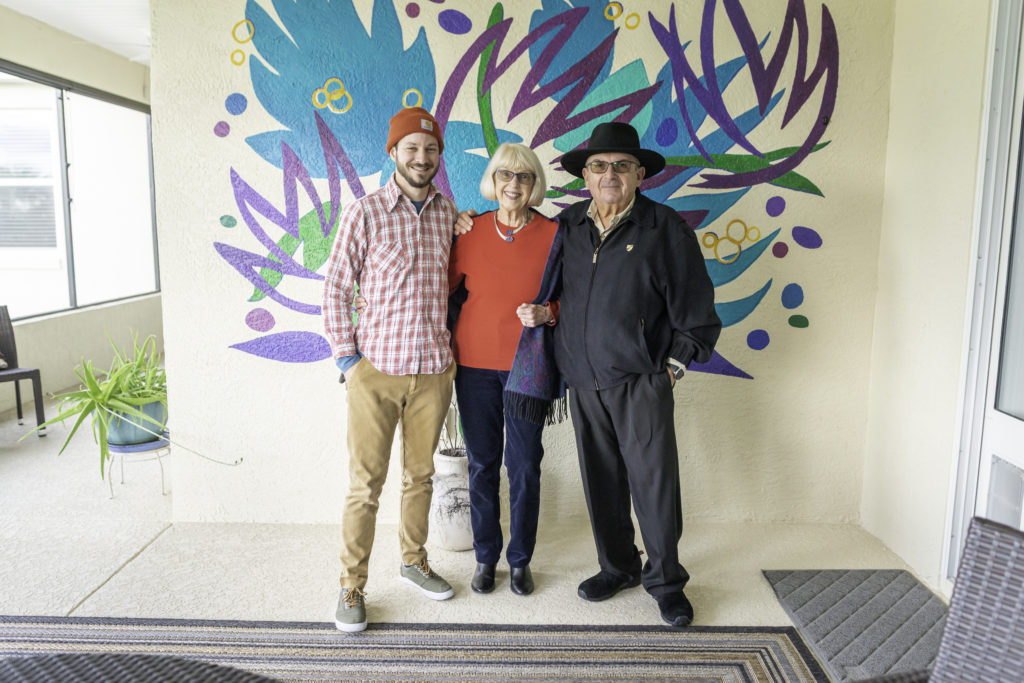 In 2017, Shapot won “Best In Show” at the Magnolia Art Xchange (MAX) and City of Ocala’s Student and Emerging Artist Competition. He encored that with his First Impressions show in January 2018 at the Brick City Center for the Arts. The latter was his artistic re-imagining of Edward Sheriff Curtis’s iconic North American photographs into abstract paintings.

“Those two events really sparked my new career and gave me name recognition,” notes Shapot. “I am so grateful for everyone who has and continues to encourage and support my art.”

As his art evolved, Shapot acquired a few more muses.

“Nature really inspires me. I love to paint elements of nature and landscapes,” says Shapot, who is as unassuming as his paintings are bold. “And people inspire me. I love painting just everyday people doing everyday things. I like to shed light on what most people might see as mundane, but is actually quite beautiful.”

While participating in a First Friday Art Walk in 2019, Shapot had the good fortune to meet Felipe and Betty Ann Korzenny, recent retirees to Ocala.

“We really liked what we saw in Jordan’s artwork,” says Betty Ann, who has a doctorate in education. “Felipe and I have always loved art of all kinds and Jordan’s work really spoke to us.”

Felipe, who has a doctorate in communications and marketing, taught at Florida State University before moving to Ocala, agrees, saying, “We have a very eclectic taste in art, from paintings to Persian rugs to metal art. If we like it, we buy it.”

The Korzennys also are very involved in the Ocala arts scene. Working with the Marion Cultural Alliance, they established the Korzenny Grant Fund for Art Educators. The couple also supports the Ocala Symphony Orchestra’s youth programs.

At that first meeting with Shapot, the Korzennys, who have owned horses, bought a brightly colored abstract painting of a horse. Not long after, they bought another three-panel abstract painting from Shapot. Soon they would collaborate on a large-scaled art project.

“After we moved into our new home in Ocala, every time we sat out on our glassed-in lanai, we felt like something was missing,” states Betty Ann. “We took a few paintings of the house and hung them on the lanai walls, but that just didn’t do it.”

“Then we started thinking about having murals painted on the walls,” Felipe adds. “Of course, we thought of Jordan and gave him a call.”

The trio conferred and agreed on a nature theme. Shapot painted several postcard-sized watercolors and the Korzennys selected their three favorites. Come June 2019, Shapot was spending a lot of time on the Korzennys’ lanai. 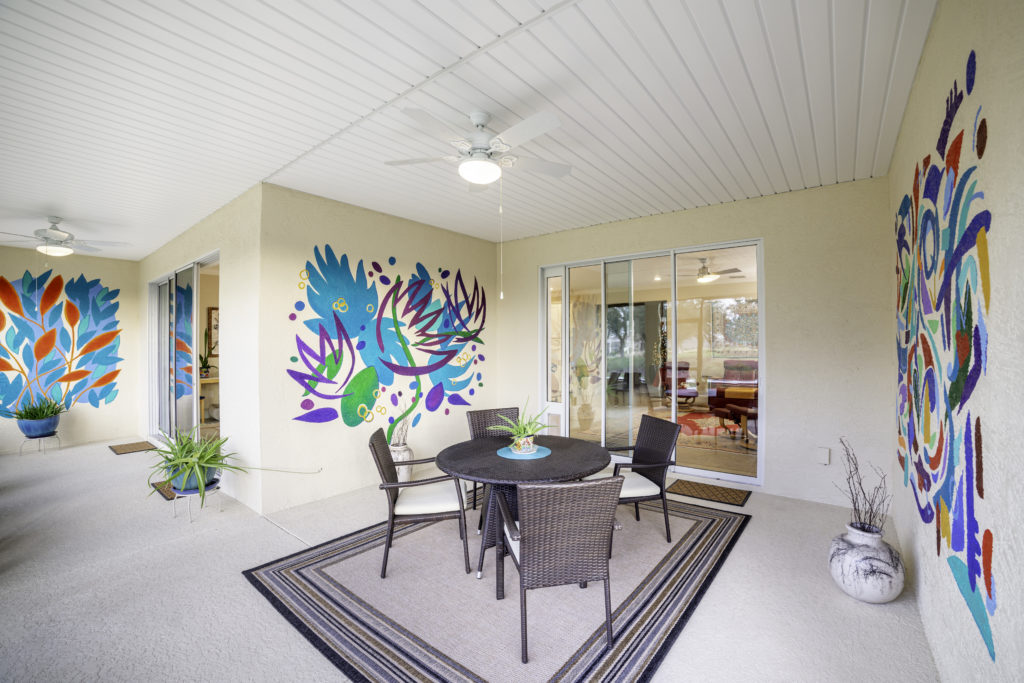 “The texture of the stucco walls was a challenge, as was dealing with the summer’s heat and humidity,” recalls Shapot, who took four weeks to finish the project. “I had to prep the walls with a clear primer. Then I projected my drawings up on the walls to paint. I used the best quality acrylics and then added multiple applications of clear sealants to protect against the sun’s UV light.”

The end result was three boldly colored abstract interpretations of nature scenes. Dreams of Flowers is 5 feet by 7 feet and features teal, orange, blue and reddish-orange foliage reaching for the sky. On the walls on each side of the outdoor dining set are Flowers of the Night and Dancing Swan, both 9 feet by 7 feet. The former is inspired by water lilies, these in bold purples and blues. The latter features an abstract swan in the center, framed by swirls of red and purple.

“Now every time we’re out on the lanai, the murals bring us such joy,” says Betty Ann, whose favorite, as well as Felipe’s, is Flowers of the Night.

Shapot, who’s partial to Dancing Swan, says, “I love working on the large canvas and the impact of murals.” And he is already working on another murals project.

“I’m painting four murals on aluminum panels for the City of Ocala’s Legacy Park,” he offers. “Each panel is 4-by-8 and will depict an aspect of African American history in the area. I am very honored to have been chosen for this special project. I feel like this is another important part of my artistic journey.”

One muse at a time.