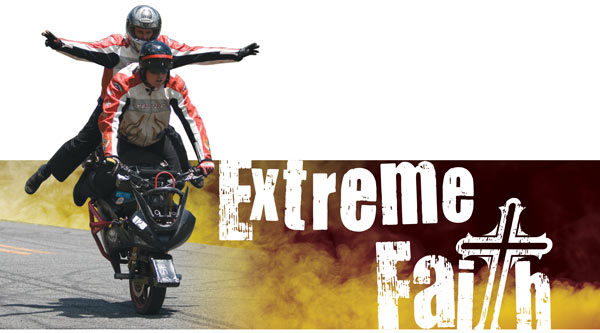 Joel Hickman and Kelly Jennings are a study in contrasts. They are two up-and-coming professionals in the relatively new arena of sportbike freestyle, or motorcycle stunt riding. They look like any other bikers—hard-core sunglasses framing their faces, protective gear donned for doing incredibly crazy bike stunts, and a self-confidence that belies their relatively new entry in this very competitive field. When on a bike competing in the tandem category for sportbike freestyle riding, they’re unstoppable, performing stunts with such wild-sounding names as Star-Fish, Butt-Front Stoppie, and The Kiss of Death, their new favorite.

The name of the stunt is pretty accurate and not what you would want your kids trying at home. (Or anywhere else for that matter!) While Joel drives, Kelly hangs off the front of the bike so close to the ground that her helmet scrapes the blurred asphalt. Kelly doesn’t hold onto anything—she’s merely “squeezing” the bike with her legs. This unusual and daring stunt earned the couple a first-place trophy for “Sickest Trick” at the King of the South Motorcycle Stunt Competition and Bike Rally in Tennessee.

Joel appreciates that their peers are finally taking notice of them and their competitive nature.

“This past year when we got fourth [place] in tandem,” he recalls, “the people who got first said, ‘We’d really like to thank Joel and Kelly for pushing us.’”

That acknowledgement motivated the couple to put in the hours of practice necessary to perfect their stunt. And it showed them that words have tremendous power, something they would later put to great use. 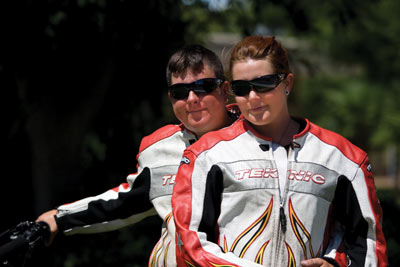 Joel is a force to bereckoned with as a solo competitor as well. He entered the “Individual Freestyle” event in the Tennessee competition and placed first. He also received a third-place award for doing the longest Stoppie, a trick where the front brake is carefully applied while simultaneously leaning forward, enough to lift the back wheel off the ground. The bike is then ridden on just the front wheel.

Joel’s come a long way with his bike tricks from a “Christ,” the first one he ever attempted.

“You actually stand up on top of the bike while you’re going down the road,” he explains. “It’s pretty scary.”

He remembers his first attempt all too well. 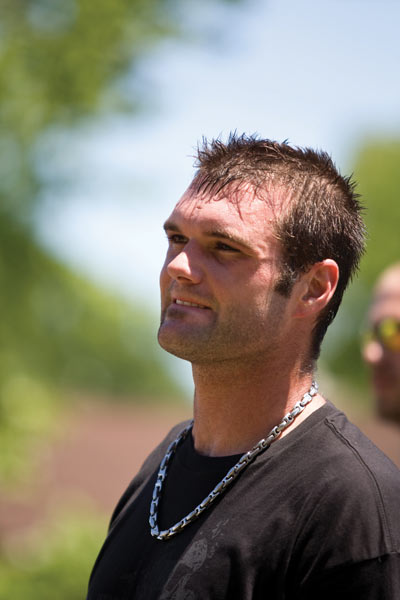 “Yeah, it was down State Road 40,” he laughs. “That’s one of the things of growing up in this sport—it’s definitely way illegal. I’ve been to jail for doing wheelies on the streets, so I don’t do it anymore. We now have private property where we have permission to go there and practice.

“Now we’re doing it for a good cause,” he continues, “rather than terrorizing
the streets.”

It’s probably fitting that Joel’s first stunt was a Christ because that’s where the study in contrasts begins. In a sport that’s known for its ride-hard-and-party-harder participants, Joel and Kelly are an anomaly, using their professional platform to be witnesses for Christ. But Joel will be the first to admit that his path wasn’t always on the straight and narrow.

“I used to be a real heathen,” he concedes, “but after meeting with one of the gentlemen [from the church], he was able to bring me up to where I am now, dealing with youth ministry and reaching out to kids.”

Many of the events where Joel and Kelly ride are fundraisers for charities, their way of giving back by witnessing their faith to the masses. One recent bike event hosted by the Christian Motorcyclists Association combined those two passions, an excuse to gather all the secular clubs from around the state for fun and fellowship.

“The CMA is about ministering to the biker community,” Joel says. “If you can reach one person, then that’s what this is about.

“We all still have problems,” he continues, “but it’s how you try to get through them. God has certainly helped me.”

Walking around that CMA event, unobservant spectators might not even realize they were in the midst of bikers who ride for Christ. Everywhere, people were decked head to boot in denim and leather, many with bandanas covering their heads. Engines revved in the distance, tires screeched, and rock music blared from the monstrous speakers. Cigarette smoke hung thickly in the hot, humid air and tattoos peeked out from under T-shirts on the arms, backs, and biceps of men and women alike. The talk was all about the newest engines and accessories for their very tricked-out bikes or the latest over-the-top-stunt that someone had just landed.

But looking a little closer, the observer would’ve been able to figure out that this was no ordinary motorcycle bike gathering. It didn’t take place in front of some nondescript bar or at an impromptu intersection on the way to Bike Week. No, this was in the parking lot at Ocala’s Trinity Baptist Church. Another clue? Many of the leather vests and tattoos featured decorative crosses or spelled out J-E-S-U-S C-H-R-I-S-T. And that rock music blaring from the loud speakers? A closer listen would’ve revealed the unmistakable strains and lyrics of Christian rock.

The melding of these two very distinct cultures can play tricks with your psyche if you’re not prepared. What you expect is usually quite the opposite.

A good case in point is Bill Dixon, the top-ranked Sportbike Freestyle Individual Champion in the country. Sure, his riding get-up is intimidating enough, but when you see him performing some of the skills that won him the first-place trophy in Tennessee, you’re thinking no one has a badder attitude than him. Burnouts, Stoppies, and Circle-Wheelies were just a few of the stunts he performed for the enthusiastic CMA crowd.

Bill is a real showman and natural thrill-seeker who loves the spotlight. But back in his private trailer, he’s a subdued young man, very quiet and modest. Riding motorcycles since he was a little boy and doing stunt riding for a decade, he’s seen many changes in his sport. That’s what makes him even more excited about the future.

“The tricks, the speed, the people—a lot of things change in 10 years,” he explains. “It used to be on the interstate, making sure we weren’t caught, and you just had to do one trick. Now, you have to put a three-minute run together and be fluent. And we’re doing events.”

He says the sport of freestyle riding has grown so popular that it’s scheduled to be part of the ever-popular X Games this year. So how does this extreme athlete’s persona jibe with the rider’s mission for Christ?

“I’ve got a cross on my bike, and before I do my runs I thank God and always tell everyone in the crowd about Him, do a little witnessing,” he admits. “God is a big thing for me. I’ve definitely become a believer in the Lord. I pray to Him all the time to help me—and other people—out.”

Bill’s mother passed away years ago, but her name has a prominent spot on his bike. As he performs his gravity-defying stunts, the tribute serves as a constant reminder of her spirit and the strong faith she instilled in him.

Because for Bill, as well as Joel and Kelly, their mission is two-fold—rise up through the rankings of their extreme sport and meet the challenges of everyday life.

With a little help from above.