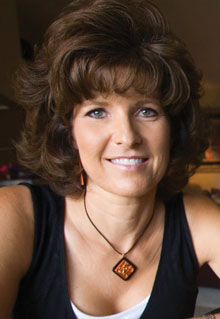 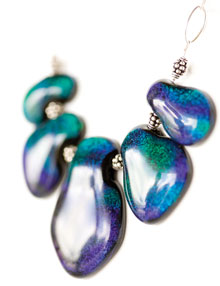 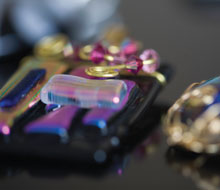 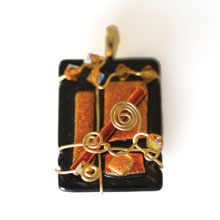 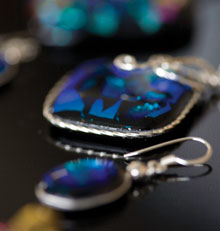 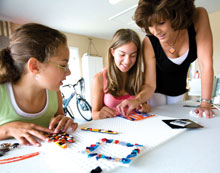 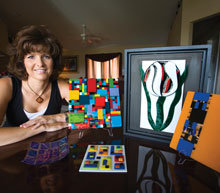 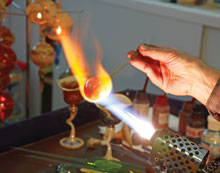 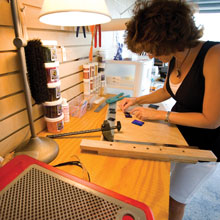 A snow storm in Cleveland convinced Denise Christmas that it was time to move home to Central Florida and find her inner artist.

“I was watching a blizzard from a glass-enclosed pool while my daughters played,” explains Denise, who was a high-profile marketing executive with a Fortune 500 company at the time. “I realized that they felt like the nanny was mom. I knew it was time to choose what was more important in life.”

Denise recalled that when she was a little girl, she made a ceramic butter dish for her grandmother, who used it for 35 years.

“That butter dish was the thing that my grandmother loved most and the thing that made her the most proud of me,” Denise remembers. “Four years ago, I gave up my corporate career and called my mom to say, ‘I’m coming home to make butter dishes.’”

While she did create a few butter dishes and other ceramics as the owner of Amazing Glaze in The Villages, it was her work with fusion glass that has led her to become a popular jewelry artist in the area.

“We all have an artist inside of us,” Denise says. “We just have to give ourselves permission to discover it.”

Denise became intrigued with fusion glass at a trade show a couple of years ago. After visiting several studios, Denise worked with nationally renowned glass artist Newy Fagan in Ocklawaha so that she could study and learn from one of the top artists in the country.

Denise installed her own warm glass kiln in her home near The Villages and made the transition from work-ing with ceramics to creating colorful pendants and earrings. She has spent countless hours perfecting techniques used in her unique jewelry pieces.

“You can’t go out and buy these types of items because they are not mass produced,” she says. “Each piece is one-of-a-kind.”

Recently, Denise was wearing one of her own multi-faceted creations and a woman asked her if she could buy it on the spot.

“I told her that it cost about $100 to make the five polished glass stones,” Denise recalls with a chuckle. “She offered me $115 to take it off my neck right then.”

The different fusing techniques that Denise uses add to the distinctiveness of the pieces. Some are tack fused, which means the brightly-colored glass lies on top of a base piece and retains its shape. Fully fused pieces are melded together for an iridescent look.

She explains that the finishing touches often transform a piece from merely gorgeous to simply stunning. Her latest creations feature embellishments like wire wrapping and beading. She has also learned to use grinders and sanding saws to create elaborate pendants and earrings.

“A piece can take a few minutes to put together or hours, depending on how you finish it off,” she explains. “I love the variety that comes with making each piece.”

Most of her jewelry pieces are made with dichroic glass, which contains ultra-thin layers of metal oxide crystals that reflect two or more colors in unusual patterns.

While glass fusion has been around for centuries, the use of dichroics is relatively new. Denise is now experimenting with specialized glasses like dichroic and confetti glass on functional plates and picture frames. Her goal is to make more large-scale commissioned architectural pieces, which are in high demand right now.

Denise says that sometimes she does-n’t know what a piece of fusion glass will become until she starts working on it.

“There are no rules,” she says. “I’ve begun pieces and put them aside. Then in the middle of the night, I’ll get an idea about what it should be.”

Always looking for a new challenge, Denise enjoys teaching others how to make fusion glass projects. Her own classes became so popular that she has turned the day-to-day operation of her store over to a business manager. She gets as thrilled as her students when they see a finished piece they’ve created for the first time.

“I love helping them feel the joy of creating something from scratch, says Denise, who graduated from the University of Central Florida with a degree in marketing communications. “I try to encourage them to push through their failures and learn from them.”

Faye Flynn of The Villages was one of Denise’s first fusion glass customers. She has made her own remarkable pieces of jewelry and has sold pendants right off her neck as well.

“Glass has allowed me to become very creative,” says Faye, who was a systems development manager for Kraft before she retired, “something that I didn’t get to be in my former job.”

She agrees with Denise that artists learn from their errors.

“Mistakes sometimes turn into something great,” Faye says. “Or sometimes they end up at the bottom of a fountain in my yard.”

When she is not teaching fusion glass techniques, Denise is often found in her home studio with daughters Lauren, 12, and Rachel, 10, who love creating their own pieces of art. The days of spending time with nannies are long gone, and both girls are glad their mom decided to return to Central Florida to a much simpler life. It was a decision that surprised even Denise.

“If you had told me five years ago that I’d be in my garage making jewelry in the middle of the night,” Denise says with a smile, “I would have told you that you were crazy.”

HOT: Almost everyone thinks of glassblowers when they think of art glass and unusual creations. With molten globs glowing at the end of a rod, glassblowing is considered a “hot” technique.

WARM: On the other hand, fusion glass is known as a “warm glass” because the heat from a kiln melts and shapes the glass. The special glass is fired in a kiln at high temperatures ranging from 1100 to 1500 degrees Fahrenheit. Lower temperatures result in a technique called “slumping” which is used in many home décor items. Mid-range and higher temperatures produce tack or full fused items.

A History Of Fusion Glass

The ancient Mesopotamians in the second millennium B.C. were the first fusion glass artisans. Although only fragments of their work survive, scholars agree that the early glass creations were valued along side gold and silver as precious materials.

The ancient Egyptians continued the development of warm glass processes and created the technique of working with glass rods, now known as lampworking. By the third century B.C., the art form reached its zenith with the Romans and Greeks. However, glassblowing became the technique of choice by the Romans because it was more efficient and cost less than kiln-forming techniques, which were virtually forgotten by 200 A.D.

In the 19th century, archeologists discovered ancient glass artifacts which led to a resurgence of interest. During the latter part of the century, France became the center for the rebirth of the warm glass movement. The pieces were usually reserved for royalty and the very wealthy.

During the 20th century, artist Harvey Littleton led the studio glass movement in the United States. One of his students, Dale Chihuly, whose work has seen a resurgence of interest with recent exhibits in Florida, was instrumental in proving that glass artists could thrive in the 20th century and beyond.