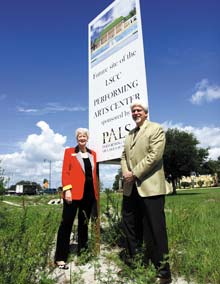 Build it and they will come is the philosophy of the community leaders who are working to bring two separate performing arts centers to the Lake-Sumter area and to The Villages. While it’s easy to think that the two centers may compete with each other for funds and patrons, that’s simply not the case, say the key players for each.

“We view each other as apples and oranges,” explains Terry Rose, executive director for the Performing Arts of Lake-Sumter. “The Lake-Sumter Center will accommodate everything from major Broadway productions like Phantom of the Opera to local events like high school graduations.”

And Jean Corley-Wix, vice president for the Villagers Performing Arts Alliance, says that a smaller performing arts center in or adjacent to The Villages is a “win-win for everyone, because we’ll be another venue that everyone can enjoy.”

The land is available, the signs are up, the architect has been selected, and the Lake-Sumter Performing Arts Center is $5.8 million closer to reality.

Some day, and maybe sooner than you think, you will not have to drive to Orlando to see a play by a Broadway touring company or a concert by a renowned country western performer. You’ll be able to see those kinds of professional performances on the Leesburg campus of Lake-Sumter Community College, where a proposed 2,000-seat, 80,000-square-foot facility will be located.

In just over a year, the PALS board and volunteers have raised nearly $6 million dollars in cash and pledges. Although another $7-to-$10 million in private funds must be raised before construction can begin, optimism runs high among the 23-member board and  Executive Director Terry Rose.

“Every dollar raised is matched by the state through the Florida Facilities Enhancement Challenge Grant,” explains Rose. “Our goal was to raise between $12 to $15 million in private donations. The structure will cost between $24-to-$30 million and the matching funds will get us to that amount.”

Although LSCC will own and operate the Performing Arts Center of Lake-Sumter, the facility will be available for everyone and will serve as a venue for performances, meetings, and community events. Locating the facility on the Leesburg campus has many advantages, the largest being that the college is eligible for the matching funds through the challenge grant.

LSCC has designated land at the front of the college on Highway 441 between the Foundation and Health Sciences buildings for the Performing Arts Center. Some of the space in the center will be devoted to classrooms and workshop areas for students.

While the college will be a significant beneficiary of having such a facility on its campus, Rose points out that the entire community will benefit.

“It will be nice to have a place where we can showcase our local talent, like the Eustis High Jazz Ensemble that recently won a statewide contest,” says Rose. “We’re limited only by our own imagination as to the kinds of events that can be held here.”

Another advantage for the county will be having a place for large gatherings. Not only does LSCC currently have to limit graduation attendance, but other organizations must rely on space-restricted Lake Receptions, a banquet facility that holds about 600 people.

Most importantly, however, is the economic impact that performing arts can bring to an area. According to Fishkind & Associates economic analysis report, the Performing Arts Center of Lake and Sumter counties could bring more than $7 million per year to the Central Florida economy. Based on numbers from comparable performing arts centers, the study estimates that more than 220,000 people will attend events annually and revenue from ticket sales will top $3.8 million. In addition, the facility could generate demand for approximately 15,000 room nights at area hotels from non-local attendees, performers, and their staffs.

“This will give Lake County a destination that it doesn’t currently have,” says LSCC President Charles R. Mojock. “A performing arts venue will be a real complement for tourism and an economic draw.”

Jean Corley-Wix wants to make sure that people know it’s the villagers, and not The Villages, who run the non-profit Villagers Performing Arts Alliance. The VPAA hopes to build a $17-to-$18 million performing arts center that will accommodate theatrical and musical productions in the active adult community.

“In the beginning, the organizers looked to the developer for help to build a performing arts center,” says Corley-Wix, who serves as the VPAA vice president. “We were told to return when we had a non-profit status and significant money in the bank.”

Last February, the VPAA was granted its 501(c)(3) non-profit status, and the initial Founding Friends drive recently raised more than $35,000 to cover a feasibility study and initial expenses, including work by an architect. In August, VPAA had its first major benefit show and is planning another benefit for next February 4. A capital campaign will kick off after the feasibility study is completed, possibly in December or January.

The alliance members know they still have a long way to go, but they are optimistic that the time is right to build a state-of-the-art facility to showcase the talents of Villages performers.

“As wonderful as this place is, we still need cultural stimulation,” says Corley-Wix,  who has a business background in strategic planning. “We can only play so much golf and tennis. We’ve researched and surveyed enough groups to believe that a performing arts center will be supported here.”

Although the VPAA would like to see the performing arts center built on land inside The Villages, Corley-Wix says the VPAA realizes that may not happen.

“There is a good possibility that we’ll have to build on land that is adjacent to The Villages,” she says. “Wherever we build, we want it to be golf-cart accessible.”