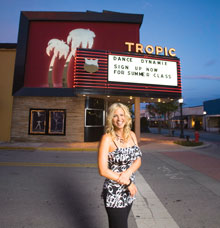 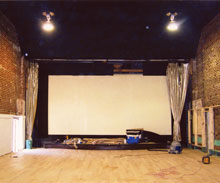 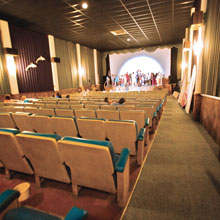 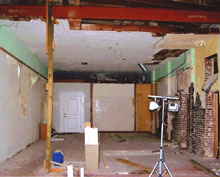 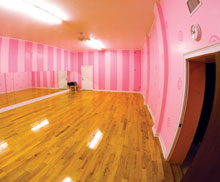 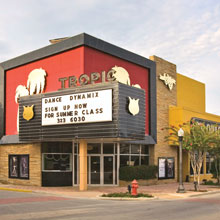 The Tropic Theatre on Leesburg’s Main Street is once again alive with activity as the home of Dance Dynamix, a school for the area’s aspiring dancers and thespians.

Owner and instructor Terri Hicks is thrilled to own a piece of Leesburg history. When she began her dance school, she had no idea she’d ever buy the historic structure.

“We started in a little building on Highway 441,” Hicks says, “and we outgrew it. We soon had more than 200 students, so we looked for a bigger building and went into the old Army Navy store just down the street.”

As the success of Dance Dynamix grew, Terri and her husband, Rick, decided the next step would be the defining one—buying the Tropic Theatre where they would have plenty of room for classes and for future growth.

The Tropic Theatre was a sad, empty building when the couple bought it in 2006. Terri and Rick were determined to bring it back to life.

“It looked like a bomb had gone off inside,” Terri says. “Live wires were exposed and walls had been torn out where demolishing was left undone.”

They stripped the walls and took out latticework, going back to the original brick. The framing crew discovered the original floors were tongue-in-groove red oak. Once the dance studios were completed, the couple went to work on the balcony, which overlooks the largest studio. The balcony now offers an out-of-the-way place where parents can watch lessons without their children seeing them.

The renovated building boasts two beautiful dance studios, an office, and an auditorium that will house the new Leesburg’s children’s theater, “Tropic Troupe.”

On a recent busy Thursday night, singers were practicing for a presentation of Cinderella, tiny ballerinas wandered through in pink leotards and ballet shoes, teenage couples prepared for advanced ballet classes, and the drama students were rehearsing other parts of the play in the theater. It may have been organized chaos, but everyone was having a great time.

Terri tries to offer enough programs to keep dancers busy throughout the year.  Classes include ballet and tap, jazz, pointe, pas de deux, hip hop, adagio, tumbling, and cheerleading. Some students are part of traveling teams that go to competitions. In addition, Dance Dynamix is the home of the Leesburg Ballet, which is currently planning a production of Phantom of the Opera for next June.

“We recently had a clinic with the dancers from the Orlando Magic basketball team,” Terri says. “They taught two routines, and the kids danced in a pre-game show.”

Terri began dancing herself at age three and stayed with it as a teenager, traveling with a competition troupe out of Tampa.

“I danced competitively for many years, and I’m Florida Dance Master-certified,” Terri says. “I’m always into doing whatever is new.”

In addition to Terri, Kaylyn Harrell, an award-winning dance instructor, will teach classes. She is a choreographer for South Sumter High School cheerleaders and teaches acrobatics at The Villages Charter School.

Ron Holiday, whose career includes George Balanchine’s New York City Ballet, the original Moulin Rouge in Paris, and Broadway performances, is the ballet master instructor. A documentary about his life, Cat Dancers, will air on the HBO cable network in the future.

Theatrical presentations will also come to the Tropic Theatre via the Tropic Troupe, the children’s theater program. Starting the children’s group has fulfilled a longtime dream for Leesburg resident Sue Thomas, who will coordinate the program.

“Years ago, my children participated in the Bay Street Theater,” Sue says. “The skills they developed on the stage built self-esteem and stature, and they learned great speaking and presentation skills.”

A retired teacher, Sue understands how children sometimes feel defeated when they struggle with difficult subjects in school. Her dream was to have a year-round theater program designed just for children where they would not have to worry about tests and grades.

“I had checked on this theater for purchase and found Terri had just bought it,” Sue says. “When I asked Rick and Terri about a children’s theater, Terri agreed that this should be a performing arts center.”

The children’s program will include dancing, singing, acting, group lessons, and private lessons. Plans are to stage a performance every eight weeks.

“We want it to be for all kids, both boys and girls,” Terri says. “Everyone can succeed in performing arts in some way.”

Scott Baltunis, known as Mr. B. to the children, is the director of the Tropic Troupe. Sue says she was thrilled to bring him on board for the project.

“I told him if he would direct, I would be the ‘go-fer and do-fer person,’” Sue adds with a laugh. “He’s a music teacher at The Villages Elementary School and loves working with children.”

Terri and Rick also want the Tropic Theatre to be accessible to the entire community because it is such a significant part of Leesburg’s history. They included room for wedding and business receptions, small parties, and other celebrations that the general public might want.

Restoring the theater to a new kind of grandeur became almost a full-time job for the couple, who did most of the hands-on work themselves. While they are happy that they could bring the building back to life, it was more than just a renovation project.

“It was all for the love of dance and the thrill of performing,” Terri explains.

A History of the Tropic

The theater in downtown Leesburg opened in 1936 as The Fain Theatre, a B-movie house. The first film to be shown was Collegiate, starring Frances Langford.

Earl Fain, who had been a manager of the famous Fox Theatre in Atlanta, built it. Fain also owned The Palace Theatre and, for a while, did the “Fain Circuit,” where he traveled to small towns with portable equipment to show movies.

“It was state-of-the-art for the day. There was nothing like it anywhere around here,” Lovell says. “Martin Theaters had a chain of them in those days, but the Tropic was majestic.”

After an addition in 1979, the theater became the Tropic Twin Theatre and was a movie house until it closed during the mid-1980s.

The last makeover came in 2003 when it was a karaoke bar called All-American Sing Along.