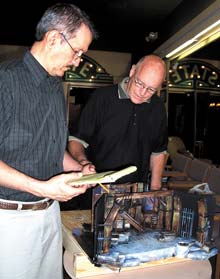 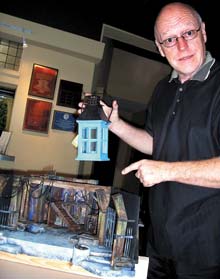 And rise and rise.

“It’s a joy seeing our audience expand,,” says Elizabeth Scholl, the Bay Street Players executive director. “Now we have so many people, they often can’t get tickets if they wait until the last minute. It’s exciting.”

Each production will run four weeks rather than the three weeks of previous years. They have also added a Saturday matinee and Wednesday performances.

David’s eyes well with tears when he reminisces about his long stretch working with Bill. The men met in 1975 at an Orlando-area civic theater where they volunteered long hours.

In June, they were working on their summer production, Man of La Mancha. David had built a miniature set so they could discuss the right lighting angles, shadowing, and electrical or battery devices.

“There are intricacies of lighting involved,” Bill says. “I put the scene breakdown on paper to give him [David] what he wants. I translate it into a design that incorporates his ideas.”

“I texture with paints,” David adds. “Bill textures with electricity or with a beam of light.”

“These guys are perfectionists,” Elizabeth says.

Artistic directors normally restrict their talents to directing the actors on stage, but David does that and much more. Artistic directors aren’t normally model builders, set designers, or carpenters. When sets need to be built—whether life-sized or miniature—theater companies often hire outside professionals or have them on staff.

However, at the Bay Street Players’ Historic State Theatre, David takes it all on.

Before becoming the full-time artistic director in 2004, David was working as a home designer for a Central Florida builder.

“In the acting world, you just don’t see what we have with David,” Elizabeth says. “He has multiple sets of skills. David’s our set designer and he builds.”

Elizabeth is also impressed with his ability to rally the local talent made up of doctors, lawyers, shop owners, and the like. The actors are not professionals, but Elizabeth believes they become that on stage.

“He makes these ordinary people shine,” she says.

Working in Central Florida theaters of various sorts throughout the years, the men have relied on each other. One of David’s previous positions was as artistic director for the IceHouse Theatre in Mount Dora. Bill was then general manager of the Bob Carr Performing Arts Center in Orlando.

“And me being a sap,” Bill humorously replies, “I’d say I’d be there.”

After Bill’s 10-plus years at Bob Carr, he freelanced as a lighting designer for several years. He was also a lighting technician for Cirque du Soleil.

The men say what drives them essentially is not money.

“No matter what happens in life, you’ve got to go for that magic moment,” Bill says. “We’re taking a stage of lumber and creating a moment so that it can evoke a response from the audience.”

“We want to take people away from the real world and have them experience the make believe,” David says. “We have a passion for the art. I’d like to say we have more passion than anybody.”

David’s theater background dates back to the early 1970s when he was in the Army, touring with a theatrical company throughout Europe. It was designed to boost soldiers’ morale. By 1975, he was ready to come back to the United States.

Not wanting to return to his childhood home in Anchorage, Alaska, he decided where to go in the most unusual way. He closed his eyes and waved a pen in the direction of a United States map.

Bill grew up in Central Florida. His first paid theatrical job came in 1978 through a Lyndon B. Johnson government grant. It was $140 per week.

“But I was getting paid,” Bill says, “so I felt very fortunate.”

The men love creating something that the audience can appreciate.

“We have been able to share this magic with the community,” Elizabeth says. “That’s what’s so amazing.”