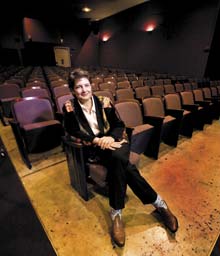 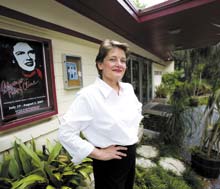 Yes, Darlin Barry’s first name really is Darlin. And, no, she’s not from the Deep South. Try Chicago.

“I was the fifth girl born in my family,” says Darlin, who first performed at the IceHouse Theatre in 1992. “And I think my mother had run out of girl’s names. In fact, I know she had because I have an older sister named Kevin.”

Darlin was born a month premature in a Catholic hospital in Chicago, where many of the nurses were nuns. Coming into the world a wee bit early meant the unnamed baby girl spent extra time in the preemie nursery and was doted on by the nuns.

“The story is that whenever my mother came to the nursery,” explains Darlin, “the Irish Catholic nuns would hand me to her and say with that Irish brogue, ‘Here’s your little darlin’.’ And since I hadn’t been named, my mother just started calling me Darlin and it stuck.”

Not only did Darlin have four sisters, she also had two brothers and it was that large family that brought out the performer in her. Singing, dancing, and putting on shows she says was “a way to not get lost in the crowd and get some attention.”

Darlin, who was named the IceHouse Theatre’s artistic director in May, has been getting attention ever since. In her native Chicago, she was a theater major at the University of Illinois while performing as a jazz singer in the area clubs. Decades later, when she joined her retired parents in Mount Dora, it wasn’t long before she was part of the area’s entertainment scene.

“I had moved down in 1991 to help my father take care of my mother, who was ill,” recalls Darlin. “I really wasn’t looking for anything, but someone told me about this place called Chicago’s and said I should check it out. I did and as it turned out, the owner was from Chicago. We hit it off right away, and next thing I know I’m putting together a band to perform in the restaurant’s lounge.”

A year later, Darlin auditioned for the IceHouse’s production of 1940s Radio Hour and was chosen for the part of Ann. She’s been associated with the IceHouse ever since as both a performer and teacher. In addition to Darlin’s long list of roles, she also taught in the IceHouse’s children’s program. One of her early standout pupils was Mandy Moore, who has since gone on to national singing and acting stardom.

While still maintaining close ties with the IceHouse, Darlin also became a performer with the Orlando Civic Theatres of Central Florida. She sang with the Orlando Pops Orchestra on two albums, Jesus Christ Superstar and Evita—25th Anniversary Salute.

And Darlin went back to school, earning a bachelor’s degree in theater in 2001 from Florida State University. During her 18-month stint at FSU, Darlin says, “Because I was the oldest one in the theater program, I got to play all the mom roles.”

The next step for Darlin was to step out of the comfort zone of community theater and into the ranks of paid professional actors. She joined Actors Equity, a professional actors’ union, and worked at the Seaside Music Theatre in Daytona Beach.

“As a performer, you have to constantly challenge yourself or you become too complacent,” says Darlin. “I’m glad I did the professional thing. It was a great experience and something I can now share with my fellow performers and students.”

With that valuable experience logged, Darlin was also delighted when the opportunity to return to the IceHouse presented itself. Longtime artistic director Terrence Shank had retired and Joel Warren had stepped into the role in 2005. When Warren and his wife Amanda decided to start their own production company, the theater was left with a vacancy.

“I came in as an interim director in March of this year,” says Darlin, who recently turned 50. “I had to quickly salvage the rest of the season with a couple of productions. But we got it done and everyone looked ahead to the new season.”

In May, Darlin was selected from a field of eight candidates to officially become the new artistic director. She has slated a full schedule for the IceHouse Theatre’s 60th season, which officially begins on September 14 with Moon Over Buffalo.

But first was the summer production of Always… Patsy Cline. Darlin starred as Cline, whose songs she began singing while performing at Chicago’s. In 1999, she first played the lead role in Always with the Orlando Civic Theatre and has since reprised the part six times.

As well as performing, Darlin will also direct the five shows of the 2007-08 season.

“I love what I do,” she says. “And I love the IceHouse Theatre and want to make sure everyone has fun. It’s like our own gigantic playhouse.”