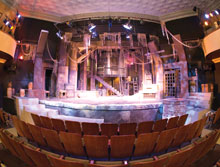 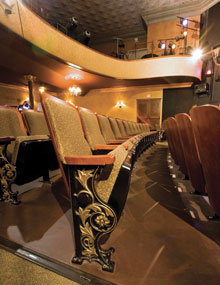 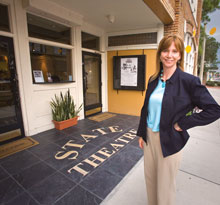 It was time to give this grand old gal new life. The Historic State Theatre in downtown Eustis—home of the Bay Street Players—has new additions such as seating, carpet, gilded wall trim, with much more coming.

Seating was a big issue for the theater built in 1922. Folks were smaller back there in the earlier part of the 20th century, says Elizabeth Scholl, the Bay Street Players executive director.

“People were slimmer then and today we are so accustomed to our comfort,” Elizabeth says.

The former seats have been completely pulled out and replaced with seats about an inch wider from top to bottom. The bottom portion of the chair is also about a half foot longer to give modern legs more seating comfort. However, they still retain that historic look, with fabric and elaborate metal trim, which suits the look of a 1920s theater.

The theater originally opened as a vaudeville house, with no permanent seats. Most likely folding chairs were brought in for shows, Elizabeth says. Those first permanent seats were not installed until the 1930s.

Then, when vaudeville fell out of fashion, the building was converted to a movie theater. By 1975, it had been sitting vacant many years when the Bay Street Players claimed it.

Elizabeth says it’s been extremely important to both her company and the community to keep the historical aspect.

“We have a lot of people who love this place,” Elizabeth says.

She says going for a typical modern look would have been cheaper, but the expense to keep it looking 1920s-era was worth it. All the renovations, which began the summer of 2006, such as seating, décor like gold trim, walls, and carpet harkens back to earlier times.

The theater’s original tin ceiling adorned with features from ancient Greece is another one of the building’s treasures. At its highest point the ceiling hovers at about 28 feet.

The Bay Street Players is a non-profit organization that counts on community donations and volunteers to help it operate and keep renovation costs down.

“It would have been a lot cheaper if we didn’t get seats like this, but we think that’s what’s so special about this building. This is a 1922 historic treasure,” Elizabeth says.

Elizabeth says it was also important for her staff to keep in mind that Lake County has a large retiree population.

“We even have seating options for the disabled,” she says. “The seats can be removed if someone comes in with a wheelchair.”

In years to come, Artistic Director David Clevinger hopes to renovate the balcony area, so it can be used for audience viewing as well. The theater currently has about 220 audience seats.

David says the fly loft is an extremely valuable asset. It allows scenery to swing up and down during performances. Through use of the fly loft—a system of pulleys, ropes and other tools, which allows scenery, microphones and such to move on and off stage by quickly flying them in and out from a large opening above the stage—a country farm scene can swiftly change to the streets of Manhattan.

The renovation of this historic landmark is an ongoing task. Because of the building’s age, there are always repairs and upkeep to be done.

“Old theaters are always in need of tender loving care,” David says. “We are responsible so it lives longer.”

David says there were structural problems with the building that also needed mending. Water was flowing in from the roof and rotting the ceiling and floors. Although these elements are less visible during a show, they are equally important to handle.

“There’s no point in doing the rest if you don’t secure your roof,” David says. “There are a lot of leaks in an 80-year-old building.”

A number of devoted volunteers scraped paint off the walls, so that a gold Venetian plaster could be put on.

“She’s a grand old theater,” David says. “We don’t want to see her pass away.”