An enterprising family with deep roots in the community is flourishing with a small local market that is big on tradition.

For as long as anyone can remember, the corner where County Roads 475 and 475A intersect in Summerfield has been a place to find fresh produce, thanks to the O’Steen family.

“His grandfather sat out here and sold produce,” shares Corissa O’Steen of her husband Levi’s family. “His grandma sold eggs. She would sell the pecans—there were a lot of pecan trees on the property. His great—grandparents had sold produce on this corner. Even Levi, at one point during the recession, got laid off from electrical work and sat out there and sold produce.”

So when she got the idea to open a produce market five years ago, it seemed like the natural way to carry on a family tradition.

“Why don’t we try it with a little building?” Corissa asked Levi. A stay-at-home mom taking care of preschooler Gunnar and her little niece, she figured it was something to do to make “a little bit of extra income—something that wouldn’t take up a lot of time.”

The couple set up shop in a 12 by 30 foot metal shed just steps from their 1910 Cracker home, originally occupied by Levi’s great-grandmother. They began selling eggs from their own free range chickens and sourcing fresh vegetables from local growers. Corissa made jam and pickles.

“When we first started this,” she says, “it was, ‘I’m going to open up a cute little market and sell my jams and jellies. I’m going to get tomatoes.’”

“That was her dream,” Levi says. “She dreams it; I make it happen.”

Within months, Corissa remembers, the business, which they named O’ Steen’s Market, “exploded.”

“I think there’s a great need,” she explains. “People are looking for local. They want to know their eggs came from within 10 miles of where they’re buying them. We tried to source as locally as possible from the start. When things are seasonal, it’s all local.”

Soon Levi had to quit his job to join Corissa in running the store full-time. By spring 2020, their little shed-turned-shop was bursting at the seams. Levi, with the help of family members, constructed a much larger building, which serves as the current store. It opened in May 2020. 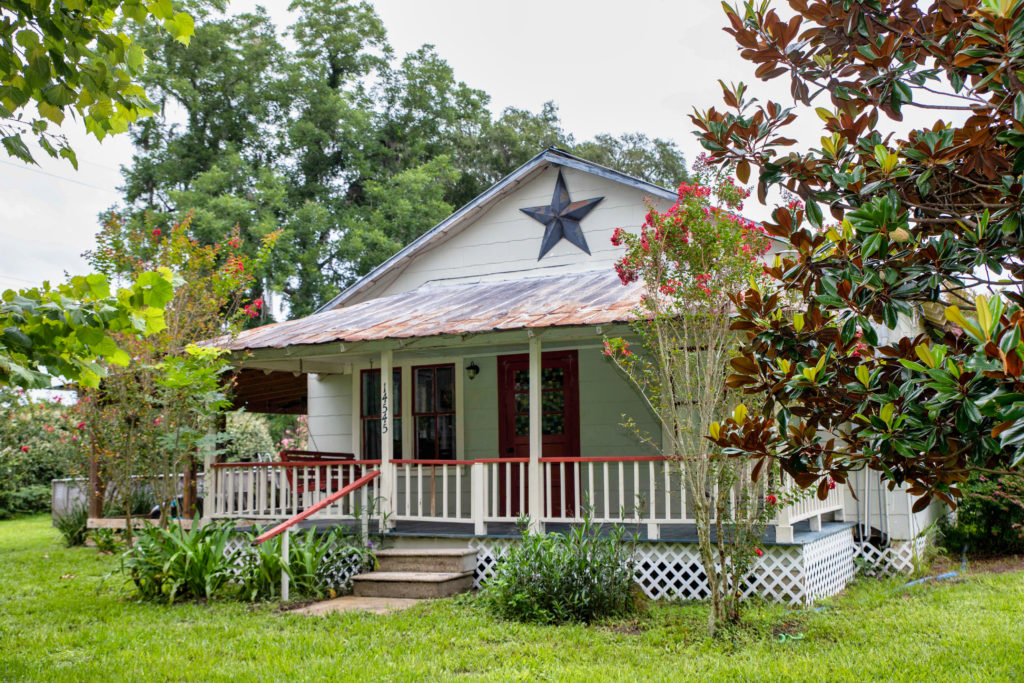 Although some shoppers come in looking for produce labeled “organic,” Levi and Corissa are quick to explain that they know where the fruits and vegetables they sell come from, and they are grown by family farmers who don’t spray their crops with chemicals.

“We’ve always thought quality over quantity,” Levi explains. “If I’m feeding my family, I’m going to give them the best I can possibly give them. We think a lot of our customers are the same way. That’s why we get the produce from the smaller farmers. More often than not, they’re eating the produce they’re growing as well. And if you’re going to eat it, you’re going to want it to be as clean as you can get it.”

These small operation farmers, Corissa explains, “are going to get out there and work. He’s going to be pulling weeds. He’s not going to be spraying tons of pesticide. Instead, a small farmer is going to plant cover crops—till it in and it feeds the soil. So, their farming practices are just much better on a small farm. There’s a big difference.”

Besides knowing where it comes from and how it was grown, Levi and Corissa point out that the majority of their produce comes directly from farm to market, often picked the same day.

“It’s a mutually beneficial relationship—a farmer and a market,” says their friend and supplier Nelson Brooks, who grows squash, collard greens, peas and other crops at his Brooks Farm in Wildwood. “They’re going to be one of the largest produce markets in the tri-county area. They are actually the people who can keep the farmers in business.”

Corissa remembers meeting Brooks not long after they opened in 2016.

“He showed up here with his truck full of collard greens and said, ‘Would you like to buy some collard greens?’ And I said, ‘Yes, Sir, I would.’ And the relationship just bloomed.”

Wild-caught shrimp comes to the store direct from Mayport and, once a month, O’Steen’s hosts HM Cattle Company from Webster, which sells grass-fed beef.

They also sell a wide variety of jarred goods, from jam and pickles to salad dressings, salsas and sauces. As demand quickly grew far beyond what Corissa could make, they sourced their O’Steen’s labeled products to the one community they knew would use only the same wholesome ingredients they would use themselves—the Amish.

“There’s a huge Amish community in Sarasota,” Corissa notes. “I’ve always loved Amish places. They make everything in small batches. It’s good stuff. Their ingredients are the exact same as what we were using. Their strawberry jam is strawberries, sugar and lemon juice. That’s the great part about the Amish stuff.”

O’Steen’s also provides an outlet for local brands to sell their small batch products. A few customer favorites include Honey Girl honey from Crystal River, pure cane syrup produced by the Raines family in Brooksville, and Granny Nichols Bar-B-Q Sauce, which, they point out, is made “just 3 miles down the road.”

Levi, who still lives on the property where he grew up surrounded by family, one of “13 kids running around the farm,” hopes Gunnar, now 9, can experience a childhood as idyllic as the one he fondly remembers. Their family of three lives in the 1910 house Levi remodeled and moved into when he was 18 years old. Levi and his siblings and cousins all inherited plats of their grandfather’s 21-acre farm when he passed away two years ago. His sister and a cousin both recently built new homes next door, so Gunnar has plenty of cousins to play with, just like his dad did.

Corissa also has family roots that run deep in the area; her family has been in northern Marion County for more than 100 years. She remembers passing by what’s now her home many, many times as a teenager and young adult when her mom would bring her to the U-pick tomato fields that stretched from Pedro to Oxford.

“Everybody came down here to pick tomatoes,” she recalls. “It’s just what you did around here.”

“She never dreamed she’d live in the house she drove by all the time,” Levi says, smiling at his wife of 10 years.

These days, running the store is a full-time job for Corissa and Levi. Gunnar enjoys helping carry boxes and stocking shelves, with plenty of breaks to play with his pet rabbit, Tin Tin.

Operating a local produce market is how the O’Steens’ contribute to the community they love. Selling goat milk is a way to support FFA students from Belleview High School. Donating to Shepherd’s LightHouse, which supports homeless families in Belleview, is one way they give back to those who need help. And bartering goods with customers carries on the family tradition of being good neighbors.

“We’ll buy from someone who comes in here and grew six peppers,” Corissa says. “We’ll barter and trade those. One guy comes in with two or three squash and thinks it’s the greatest thing. He loves it and it adds to the fun.”

“That’s the way it used to be,” Levi adds. “One person can’t grow everything for them to eat, so they focus on one thing and then they trade with other people who grew the other stuff. And we do the same thing. It’s good for us, good for you, and good for the people we’re selling to.”

For more information, visit osteensmarket.com or connect with them on Facebook.