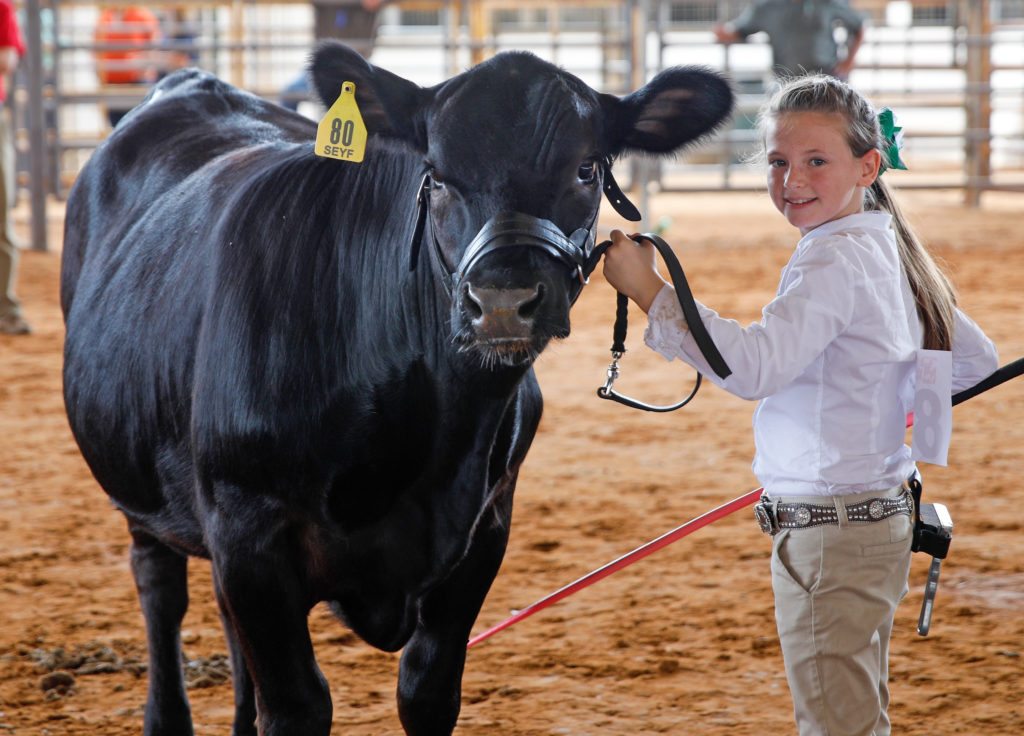 When Gage Alberty enters the ring at the 2018 Southeastern Youth Fair with his 4-H club hog, he’ll do so with plenty of experience under his belt. That’s because 15-year-old Gage has already shown hogs for many years at the venue. In fact, this will be his eighth year competing in the market swine division.

This year, Gage is co-showing his hog with Kinsley Starling, another member of his 4-H club, but he’s also branched out in a new direction, showing a steer for the first time through his school’s FFA program.

Jet, an Angus-Charolais cross, is the first steer Gage has shown, and he says the time challenge is greater than with hogs. He explains that it’s important to bond with the animals in order to care for and show them properly. That means spending plenty of time with his animal projects. But this is nothing new to the freshman from Belleview High School.

“I’ve grown up with animals, and I love showing them,” says Gage. “It’s a very good experience, but it takes a lot of time.”

Gage admits he’s probably more responsible than the average 15 year old and says the animals have played a big role in that.

Gage’s father, Brian Alberty, agrees that his son has learned a “tremendous” amount of responsibility as a result of working with the animals. He says Gage puts in many hours feeding and caring for them and doing everything possible to ensure his projects bring top dollar at the fair auction.

Gage plans to participate in the Southeastern Youth Fair (SEYF) through his senior year and has serious plans for the money he makes from selling his animals.

“I’m saving the money to buy a truck and go to college. I’ve wanted to be a veterinarian since I was 7 years old, and I plan to go to the University of Florida because they have a good vet program there,” says Gage, who hopes to have his own veterinary clinic one day.

Kinsley Starling, 9, has been in 4-H for four years. A third-grader at Blessed Trinity School in Ocala, Kinsley spent the last three years showing rabbits and chickens at the SEYF, as well as participating in the Home Arts exhibit in the fair’s “Watch Me Grow” program.

For the 2018 SEYF, Kinsley is taking on the challenge of bigger livestock and will be showing her first steer, an Angus-Charolais steer she named Bingo, as well as her first hog, Wilbur, (which she’s co-showing with Gage). She says the toughest part has been learning how to feed and work with the animals. She’s also had to learn how to manage her schedule, as she not only has homework and caring for her animals but also after-school sports.

“My mom is the main reason I want to do 4-H and show animals,” says Kinsley. “She was raised on a farm and in 4-H, so I want to learn more about the farm and be in 4-H like my mom was.” 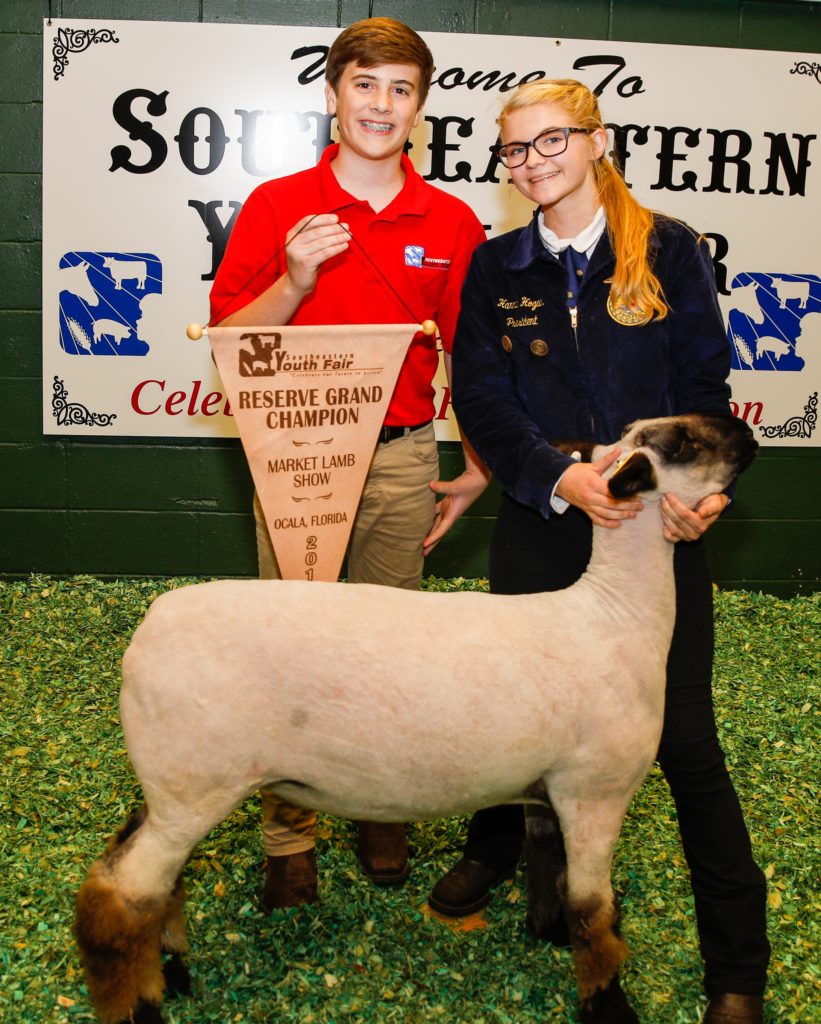 If Kinsley follows in her mother’s footsteps—make that boot steps—she’ll be on the right track, as her mom’s first steer was reserve grand champion at the 1993 SEYF. (And that steer just happened to be named Bingo, as well!)

Both Kinsley and Gage belong to the Kendrick 4-H Club, of which Kinsley’s mother, Amber Starling, is a leader. If you’re thinking there may be a generational component to 4-H participation, you’re absolutely right.

“I participated in 4-H for 10 years, where I was involved with the forestry judging team, attended 4-H camp yearly and competed at state level with project demonstrations at Florida 4-H Congress,” says Amber Starling, who showed horses, steers and heifers at the SEYF in the same club that she currently leads.

“I have been the leader of Kendrick 4-H since 2011,” says Amber. “The Southeastern Youth Fair provided me with everlasting memories and lifelong lessons that I will cherish forever. I formed multiple bonds and enduring friendships throughout my 10 years as an exhibitor in the fair, and I enjoy giving back as a volunteer due to what the fair has done for me. Responsibility and dedication are two traits that come to mind when I think of my experiences with my 4-H and Southeastern Youth Fair projects as a child. I am truly grateful to be able to help mold not only my children but other children throughout the Marion County community.”

In a world filled with negative news stories and disturbing social media accounts about teenagers’ less than stellar exploits, it’s more than refreshing to realize there are also kids like Gage Alberty and Kinsley Starling, and the good news is that the Southeastern Youth Fair is filled with such young people. Driven, determined and dedicated, these are the youth who are making a difference in their own circles and hopefully, eventually, in the world.

When this year’s SEYF kicks off its nine-day run on February 16, it will be the fair’s 78th year. The theme for 2018 is “Southeastern Youth Fair: Growing Right, Shining Bright.”

The fair’s mission is to “recognize the outstanding youth of Marion County as a showcase for competition, exhibition, enhanced educational opportunities and the promotion of self-esteem and personal growth and development, while aiding in the education of the citizens of Marion County regarding the importance of agriculture and related industries in our area.”

The SEYF also offers a number of different scholarships to participants in various classes.

Participants are 4-H and FFA students ages 8 to 18 who are from Marion County. Divisions are based on the child’s age as of September 1 and include Juniors (ages 8-10), Intermediate (11-13) and Seniors (14-18, or high school graduation if they turn 19 before the end of the school year).

“We also have Cloverbuds, which are kids ages 5 to 7 who participate in the ‘Watch Me Grow’ events, and we’re expecting 130 or more children in that age range,” says SEYF Director Denise Deen.

“This year we’re already on track for a record number of participants, and [we] will exceed last year’s numbers,” Deen adds. Last year, the fair featured 1,150 kids.

It’s A Farm Out There

Wander the fairgrounds and you’ll quickly realize the wide variety of animals and talents represented over the duration of the event.

The foundation of the fair is the Steer Show, which began in 1941, and a number of other classes have been added through the decades. Although the Steer Show and subsequent auction are highly publicized, there are far more critters at the fair than cattle alone. Competition categories include:

“The market swine class has the most number of entries; we’re at almost 300 this year,” says Deen. “This is our biggest auction, and our community is so supportive of this show.”

Youth participating in the steer and swine classes must sell their animals at auction, whereas with lambs and goats, sale at auction is encouraged but not mandatory. At the auctions, animals may be purchased by any registered individual, business, community club or group.

Deen explains that each of the market categories—steers, swine, lambs and goats—requires hands-on involvement by the youth participants and offers both financial and educational reward. She notes that young people gain valuable life skills, such as responsibility for daily care and management, record keeping, marketing, communication and more.

“Lambs and goats are easier to handle (and less costly to purchase and feed) than steers, so many kids start here. We have over 100 entries in those classes this year, which is a record number,” says Deen.

“The poultry and rabbit shows are the most visited because the barn is open, and these animals are here all week, unlike with the other animals, which are on the grounds for a shorter amount of time due to space constraints,” explains Deen.

The Home Arts section of the fair takes place all week and features a garden/horticulture show, kitchen show, art show, sewing and one of the most popular divisions, photography.

“The BBQ contest has gotten bigger and bigger over the years, and local officials are the judges,” says Deen.

The SEYF kicks off with a fundraiser carnival February 15 through 18. Tickets for rides and food items may be purchased at the event. Admission for the rest of the fair, beyond the carnival, is free to the public.