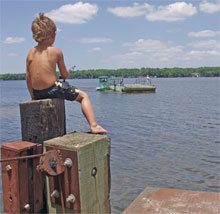 Looking for a little back-road adventure, as well as a shortcut across the St. Johns River? Then may we suggest the Fort Gates Ferry, located east of Fruitland Park?

The privately owned ferry service, which dates back to 1856, is the oldest continuous operating facility of its kind on the river. It’s well-worth the $9 one-way ticket.

If you motor east on CR 316 you will run into SR 19. Instead of turning north or south on SR 19, go straight. Your adventure will begin immediately and continue for seven teeth-jarring miles of rough dirt road before dead-ending at the ferryboat slip and boat ramp on the east side of the St. Johns. There, you will find a sign directing you to pull up on the wooden ramp and turn on your headlights. Prepare to wait. If Dale Jones or his wife, Letica, part owners of the Gateway Fish Camp and Ferry located on the opposite shore, happen to be watching, (note: it is faster if you call them on your cell phone) Dale will head across the river to fetch you and your vehicle.

But this ferry is a far cry from the wooden barges that once served Fort Gates during the Seminole Indian War and the Civil War — barges that had to be poled by hand across the river. The present ferry is a tandem arrangement consisting of a 21-foot tug and a 40-foot iron barge. The tug was once a wooden sailboat (circa 1918) that has been decked over and fitted with a wheelhouse. A 4-cylinder, 55-horsepower diesel engine powers it. Connected to the barge by a side-mounted, trailer-like ball and hitch, the tug can easily pivot around and position itself for the trip back without disengaging itself from the barge. The trip across the mile-wide river takes only 10 to 15 minutes.

Although the ferry service’s previous owner, Don Yale, earned the nickname Captain Crash after accidentally ramming his barge into the fender boards lining the west side ferry slip, the ferry service itself has had only one serious mishap. That accident, according to Dale, took place during a particularly windy and rainy day in 1946, when a car belonging to a county commissioner slid off the barge into the river. Dale, who has operated the ferry for five years, has encountered only minor problems, mostly engine trouble, although once the rudder on his tug snapped, sending him down river. In each case, his son came to the rescue with a backup boat.

Today, because of Coast Guard restrictions and the high cost of liability insurance, Dale says he has to abide by a two-car or a five-ton limit on what he can carry across the river. The only other obstacle he faces is low water, usually a March and April event, which sometimes prevents him from landing on the western side of the river.

Traffic demand varies. At times, Dale says, he may have only two to five cars a day (operating hours are 7am to 5pm every day but Tuesday). But there are occasions when it gets really busy.

Dale said the ferry has seen its share of celebrities, including actor Paul Newman, who, along with the barge, was featured in a TV commercial for a sports car a number of years back. The ferry also gets its fair share off foreign tourists. “I’ve had people from Germany, France, and Japan,” he says.

Today, there are only two other ferryboat services operating on the river. One is the publicly run St. Johns River Ferry, known to the locals as the Mayport Ferry near Jacksonville, and the other is at the opposite end of the St. Johns at Drayton Island in Lake George.

But for those who enjoy a bit of Florida history mixed in with their backcountry travels, the Fort Gates ferry is worth the ride.