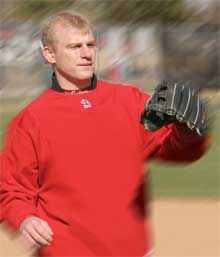 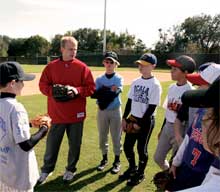 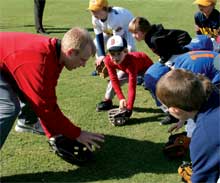 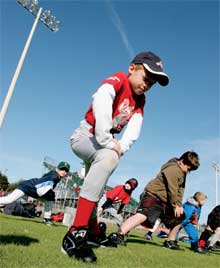 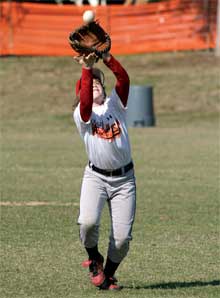 Many little boys dream of growing up to become a great baseball player. And 150 lucky Ocala boys are now one step closer to their goal thanks to a little help from David Eckstein, a first-class ballplayer, a Central Florida native, a World Series MVP, and an even more generous man.

David Eckstein was drafted in 1997 by the Boston Red Sox in the 19th round. He isn’t your “typical” ball player at 5 feet 7 inches tall and weighing less than 170 pounds. But he has talent and spirit. Who would have guessed that less than 10 years after being drafted that he would be named Most Valuable Player of the World Series as starting shortstop for the St. Louis Cardinals? Central Florida native — and former Gator player — David Eckstein certainly didn’t.

“I was in complete awe,” David says. “I actually made a comment to my wife during the All-Star Game about how cool it would be if I could be named MVP of the World Series because I could get my first new car! When you play ball, you play to win championships as a team; you’re not thinking about being named MVP.”

So how does a world-class player like David Eckstein end up hosting a youth baseball camp in Ocala?

The connections are closer than you’d think.

David grew up in nearby Sanford. He played baseball at the University of Florida where he met Ocala’s Tommy Bond. The two became roommates and close friends while attending UF and playing ball together. Today, Tommy is head baseball coach at Trinity Catholic High School, and he and David remain good friends.

“David is a great role model,” Coach Tommy says. “I think you’d be hard pressed to find a better one, in fact. He is the epitome of hard work and doing things the right way.” Tommy adds that he’s been blessed with wonderful friends who are willing to take time out of their hectic schedules to get involved with an event like the baseball clinic. “I’m good friends with Tommy,” David says. “And I’m always looking for a way to give back to the community each year. Tommy’s baseball clinic came up, and I thought it was the perfect scenario to give back and to pass on a positive message for the kids.”

The David Eckstein Baseball Clinic was held on December 10 at Trinity Catholic High School. Nearly 150 kids, ages seven to 13, bundled up for this once-in-a-lifetime experience.

Eight-year-old Michael Rafferty plays shortstop for the Rotary Club’s Cardinals team, so you could say he’s a mini version of David Eckstein. The lucky young ball player even got to travel to St. Louis recently to see his favorite team play.

“We saw two games at the new stadium and two at the old,” Michael says. “It was really fun.”

Tommy says that as a coach, he was thrilled to be able to bring the MVP of the World Series to the kids.

“David and I started talking about this during the League Championship Series,” Tommy says. “We had no idea at that time that St. Louis was going to win the World Series or that David would be MVP. Since David is my friend, I wanted everything to be perfect at the clinic. I know I didn’t get a whole lot of sleep the week before. I wouldn’t have been able to pull it off if it wasn’t for the great group of parents who were helping me every step of the way.”

Tommy made sure to set up the clinic in such a way that each child would get to spend quality time with David, who ran the ground ball station.

“To a young kid, this is an amazing experience,” Tommy says. “I wanted the groups of kids small enough so they could ask David questions if they needed to.”

Other stations included hitting, base running, bunting, and fly balls — and those are just a few.

“We had a solid group of coaches assisting with the kids,” Tommy says. “We had Kirk Campion, the pitching coordinator for the Chicago White Sox; Luke Wren, a scout from the Arizona Diamondbacks, Dale Hall and the baseball staff from North Marion High; Randy Popple, the strength coach from the Minnesota Twins; and David’s older brother Rick, who will soon be on staff with the Cardinals.”

“The biggest take away we wanted the kids to have is that the game of baseball is fun,” David says. “I wanted to pass on the message that if you believe in yourself and work hard, anything is possible. Baseball has taught me to do the right things and make the right decisions, and that’s what I want it to do for these kids, too.”

Batter Up!
Catch David Eckstein in person during the Cardinals’ Spring Training games in nearby Roger Dean Stadium in Jupiter. Call (561) 775-1818 for ticket information.