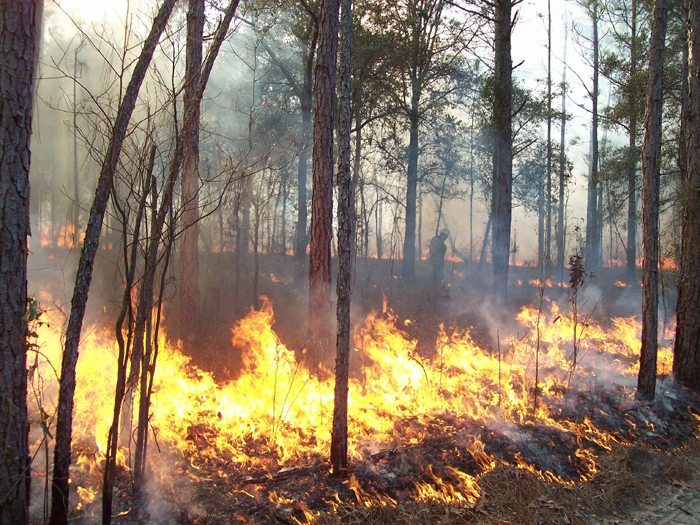 Last year, over 2 million acres burned in 58,916 human-caused wildfires, and that doesn’t count the damage from fires started by natural causes, like lightning.

Looking at statistics like this, it seems ironic that one of the best ways to fight fire is with fire itself. But it’s true.

According to the Florida Forest Service, prescribed burning, which some people refer to as controlled burning, is the controlled application of fire to accomplish planned land management objectives. Simply put, it’s a safe way to apply a natural process, ensure ecosystem health and reduce wildfire risk.

Topping the list of desired objectives is fuel reduction. Creating a plan and carefully burning an area greatly reduces the fuel (dead fall, underbrush and debris, such as leaves and pine needles) that feeds any fire, allowing prescribed burns to go a long way toward limiting damage from future wildfires in the area.

Native wildlife, including at-risk species like the red-cockaded woodpecker and Florida’s gopher tortoise, also benefit from prescribed burning, as fire opens the area and destroys forest “litter,” which in turn encourages native vegetation to grow and thrive, providing forage and improving their environment. Some birds, such as quail and the Florida scrub jay, require specific types of vegetation cover for nesting that is directly influenced by frequent prescribed burning.

Fire also helps control and eliminate disease, such as brown spot needle blight in longleaf pines. It’s been shown that prescribed burning can improve the growth of long leaf pines by 10 to 12 years.

Burning For A Good Cause

The practice, although now more precise, is certainly nothing new.

Many of Florida’s sensitive ecosystems are considered fire dependent, or fire adapted, meaning they rely on fire to remain healthy and biologically diverse, explains Saddler, who works out of the Tallahassee office.

“Lightning causes a lot of natural fires, so the land has adapted to having frequent fires even before people ever lived here,” he adds.

The length of time it takes to see the benefits of prescribed burns varies, depending on the objectives for burning in the first place. For example, an immediate benefit is the reduction of threat from wildfires (and intensity if they do occur) due to a reduction of fuel. On the other hand, if the intention is to restore a specific native grass to the area, this could take several years.

How often a section of woodland is designated for prescribed burn depends on that particular ecosystem and the desired objectives.

“We try to keep most of our forest land on a three- to five-year rotation,” says Saddler. “If you don’t do this, you get a lot of fuel build up, and that changes the ecosystem. We try to burn a pine savannah every one to three years, but a scrub area might only be burned every 10 years. Frequency varies depending on the type of land and the objectives.”

In Florida, many prescribed burns are conducted during the winter months when cooler weather helps protect the trees in the burn area. This is also a time when cold fronts frequently come through, making the weather immediately after the front more predictable and with lower humidity, which is ideal for burning.

Plenty of planning goes into every prescribed burn before a single spark is ignited.

Fire management experts view the site, decide which type of fire is needed and write a burn plan.

“If you have an area that hasn’t seen fire in a long time, you want to start with a cooler fire, not a hot fire initially, because there will be a lot of fuel,” notes Saddler.

The fire-management team also takes into consideration surrounding populated areas and how they will be affected by the burn.

“It’s very important to know where the smoke will go,” says Saddler, explaining that they use a process called “smoke modeling” (or “smoke screening”) to determine this. Using computer technology and weather forecast data, the burn team can see a predicted smoke plume for the area they plan to burn.

“If there’s a town, school, hospital or roadway, we don’t want smoke in those areas for health and visibility reasons. If we need a particular wind direction to keep smoke from going toward certain areas, this helps us determine which day to burn.

“Although it’s inconvenient to deal with smoke from a prescribed fire, it’s not as bad as it would be from a wildfire,” he points out. “We really do our best to minimize the impact from smoke, but we’re trying to maintain a healthy forest, and, in Florida, that requires burning.”

Before conducting a burn, fire managers also check existing firebreaks (creeks, rivers, roads, previously harrowed firelines, etc.) to be sure they are adequate to contain the blaze. Ideally, they use a natural firebreak, which may be a creek or dirt road, as the starting point.

“We start a small test fire to make sure the smoke is going in the direction we want and the fire is burning in a way that will meet our objectives,” says Saddler. “If this test fire checks out, we continue lighting what we call a ‘baseline’ along the downwind edge of the area to be burned. The fire widens this area, increasing the width of the firebreak on the downwind side. We call this a ‘backing’ fire.”

In fire terminology, a backing fire moves slowly, as compared with a head fire, which moves with the wind, feeding the flames to create a fire that burns hotter and faster than a backing fire.

By using a natural firebreak, this backing fire rapidly creates a “blackline,” a strip of land anywhere from 50 to 100 feet wide. As the vegetation in this strip quickly becomes blackened from the burn, this prevents flames from jumping the blackline and burning the area behind the line that isn’t part of the prescribed burn.

The prescribed burn managers then go in behind this first line and light additional fires. They often use “grid ignition,” meaning they light small fires in multiple areas, rather than lighting one whole line of fire.

“It’s all about keeping an eye on the wind, which can be tricky in Florida, because the sea breezes can make the wind change directions,” adds Saddler.

Although wildfires can be devastating to wild animals, in most cases, prescribed burning is rarely deadly.

“Most animals do well. Fire is a natural thing in Florida, and most animals know what to do,” says Saddler.

Even though wildlife benefits from prescribed burning, they still have to get away from the fire. Some flee or fly to safety, while others hunker down and wait for the fire to pass through.

“A lot of animals use gopher tortoise burrows to hide out from the fires,” Saddler notes.

Research shows that dozens of species use these burrows, which are typically 15 feet long and at least 6 feet deep, for refuge during times of fire.

So if fire is helpful for managing Florida’s woodlands, does that mean landowners can burn their own property as they see fit? The answer is not a simple “yes” or “no.”

Marion County has significant acreage dedicated to agriculture, and many farmers burn pastures to improve grazing. You may own the land, but you can’t just go out and set fire to your field.

“Any kind of acreage burning—what we call a ‘broadcast’ burn—requires that you call for authorization,” says Saddler. “And if you’ve never burned before and are interested in doing it, someone from the Florida Forest Service can come out, look at your property and give recommendations.”

Once you have authorization for such a burn, you must also have equipment on hand to contain/suppress the fire (tractor, etc.) and meet greater setback requirements than those for burning yard waste.

Think twice before burning right after it’s rained. You might think this is safer, but because the material you’re burning is wet, this creates much more smoke. Plus, it’s likely to not burn completely, so you’ll have to tackle it again once the material has had time to dry out.

What about burning leaves and dead branches when cleaning up your yard?

Yard waste does not require authorization to burn, so long as it meets the following requirements:

Even when you’re just burning yard debris, it’s a good idea to call your local fire department before you get started. They can tell you if there are specific city/county laws you need to follow or if there is a burn ban in place, which happens routinely during times of drought.

Once you know it’s OK to burn, you’ll want to prepare the area beforehand by raking down to bare soil around the burn pile to prevent the fire from spreading. If burning in a barrel, place a sheet of wire mesh over the top to deter sparks from escaping. Burning in a spot where a water hose is accessible and wetting down the soil are smart additional precautions.

Keep in mind, the dead pine that fell in last week’s storm that you’ve neatly chopped up doesn’t qualify as yard waste. If you want to burn a downed tree, this requires a call to the Florida Forest Service for authorization.

Always remember, fire is serious business. Even if you’re just burning yard waste and the fire gets away from you, you can be held financially liable if the fire department has to come and/or the fire damages neighboring property.

For burn authorization on private land in the Waccasassa Forest area, which includes Marion County, call (352) 395-4951. For more information about fire safety, visit freshfromflorida.com and click on “outdoor burning” under the heading “Prescribed Fire.” You can also download the free brochure “Know The Law…Before You Strike That Match.”

Is Your Home Safe From Fire?

As a homeowner, you can take important steps to make your home and property less vulnerable to wildfire. Research has shown that the “defensible space” (the area within 30 feet of your home) is a critical zone. Look closely at your entire yard—especially this area close to your house—and take steps to make it as safe as possible by utilizing the following tips: