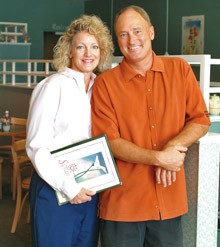 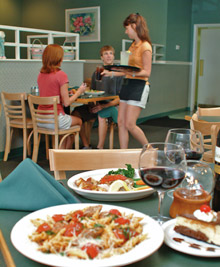 When a restaurant becomes a spot you want to frequent more than once a week, you know you’ve found something special. And when you start recognizing other patrons’ faces on a regular basis, you know you’re not the only one who’s found a favorite place.

Since opening its doors in February 2001, Scrambles Café has found a niche with a pleasantly varied clientele. On any given day you’ll find business people, working men, moms, retirees, and families. It’s a great spot to catch up with your girlfriends over a late breakfast, but the quick and efficient service also makes it popular with working folks on a tight schedule.

The fact that such an assortment of customers has made Scrambles a preferred spot is high praise to managing partners Steve and Allison Nile. The husband/wife team spent seven years in the Caribbean working at various upscale resorts and now brings its accumulated experience to the daily workings of the southeast Marion County eatery. The menu itself is a combination of years of travel, research and eating in fine restaurants.

Chat with either Allison or Steve and it’s easy to see that they’re completely at home running Scrambles — whether working in the kitchen, greeting customers, or catering business meals. One or both of them can be found at Scrambles virtually any time during working hours. Although restaurant careers typically involve long, demanding days, Steve says the breakfast-lunch concept is one of the least stressful.

“The hours complement kids being in school and have enabled us to be part of our daughters’ extracurricular activities,” he explains. The Nile girls are now 13 and 16.

Situated in Maricamp Square, not far from Tuesday Morning, Scrambles is a bright and friendly place to catch breakfast or lunch seven days a week. Dinner is served on Friday and Saturday evenings. The décor is a soothing sage green palette with floral murals painted directly on the walls by a local artist. You’ll have to look closely to see that the large “blackboard” listing the deli choices is actually a painting,


You can’t go wrong starting the day at Scrambles Café. Depending on how virtuous you want to be, there are numerous healthful options. Among the restaurant’s signature breakfast choices is the Scrambles Sun-Up, a tower of fresh fruit, strawberry yogurt, granola, walnuts and apple slices, prettily served in a parfait glass. Another tasty pick is the Fresh Fruit Crepes, or you can choose an omelette made from cholesterol-free eggs, spinach, tomato, mushrooms, and Monterey Jack cheese. These and several other choices are served with a fresh-baked muffin. I highly recommend the Glorious Morning Muffin, a lovely creation that tastes more like dessert (think carrot cake) than a breakfast treat.

If your idea of breakfast is stick-to-your-ribs hearty, rest assured you will find plenty of choices. Go Southern with homemade sausage gravy atop a buttermilk biscuit and two eggs any style. The Greek Legend is a perfect combination of sausage, fresh spinach, garlic, black olives, and eggs served frittata style and topped with feta cheese. Among the variety of omelettes on the menu are the Santa Fe, filled with green chilies, jack cheese, tomato and sour cream, and the cleverly named The Butcher & The Mouse, featuring crisp bacon, ham or country sausage and a choice of cheese. A popular choice is the Garden Delight, which wraps fresh veggies and Monterey Jack cheese in an omelette topped with sour cream.

True to the establishment’s name, the menu highlights several scrambled egg entrees, which come with Scrambles Skillet Spuds (cooked on the griddle, not fried) and an English muffin, biscuit, or toast.

If your idea of breakfast includes made-from-scratch waffles or pancakes, you’re in luck. You can savor Belgian waffles or pick from buttermilk, blueberry, cinnamon raisin or wheat germ pancakes. Unlike weighty pancakes, these delightful hotcakes are light and fluffy, thanks to the secret ingredient of cream cheese. Served with real butter and warm syrup, they conjure up childhood memories of mornings at Grandma’s house.

Sunday is the busiest breakfast day and with good reason. In addition to the already mentioned choices available every day are the Breakfast Burrito, Cinnamon Swirl French Toast, Eggs Benedict Arnold, Breakfast Sampler, the Breakfast Club Wrap and a Breakfast Sandwich served on either a croissant or sandwich-size English muffin.

The majority of breakfast items can be ordered all day, but items cooked on the griddle, such as pancakes, aren’t available after 11:00, as Scrambles offers a number of grilled sandwiches for lunch.

Anyone craving a serious sandwich will find it on the menu and several are standouts. Sandwiches are accompanied by Skillet Spuds, Kettle Chips or a fresh fruit cup. (No greasy fries here — there aren’t any fryers in the Scrambles kitchen!)

The Royal Reuben combines both corned beef and pastrami with the traditional thousand island, sauerkraut and melted cheese, all perfectly grilled on marble rye bread. A substantial char-grilled chicken breast is the main focus in The Malibu and comes topped with bacon and melted cheese on a croissant. Other tempting sandwiches include the Al B. Core Presents, (a blend of Albacore and light tuna, water chestnuts, celery, red onion and dill blended with low-fat mayo and served on Wheat Berry bread with lettuce and tomato), and the American Smokehouse Club (turkey, provolone, applewood-smoked bacon, lettuce, tomato and mayo served on toasted marble rye).

Another great choice is the California Wrap, which features a soft spinach tortilla deliciously packed with herb-grilled chicken strips, guacamole, jack cheese, lettuce and tomato, with salsa on the side. Of course, you can always opt for an old fashioned burger — Scrambles makes theirs from Angus beef and you can get it with or without all the toppings.

Salmon and Pasta Primavera also make a tasty lunchtime appearance, and many patrons order the quiche of the day, which contained sun-dried tomato, spinach, and artichoke hearts on the day we visited.

Salad lovers are in luck, with at least seven entrée salads from which to select. A big seller is the Chicken Duet, a savory chicken salad which is just a tad sweet and contains bits of pineapple and mandarin oranges. As colorful as its name, the Jewel Salad is Scrambles’ version of the Cobb salad and includes turkey, bacon, tomato, mushrooms, black olives, feta cheese and walnuts.

The Greek Salad contains the traditional ingredients, but the light herb vinaigrette dressing makes it even better. A taste of the west coast can be found in the Pacific Rim Chicken salad with its grilled chicken strips, cashews, peppers, water chestnuts, mushrooms, green peas, and Oriental dressing.

Soup is always on the menu, both the house Vegetable Barley and a “soup of the day.” Enjoy a cup or bowl, or follow the lead of many customers and have a luncheon combo with a deli half-sandwich and/or a small garden salad.

There are usually four desserts on the menu and the dark, moist Carrot Cake is a regular, while other choices vary. Don’t worry — you can almost always find something in the chocolate food group!

Children have their own menu with kid-friendly choices such as crust-less PB&J, grilled cheese, hamburgers, ham and cheese or turkey sandwich, and noodles, served with either marinara or cheese sauce. During the short wait for your meal, they’ll be happily entertained with the menu’s coloring page, word and number games, which the Niles’ daughter Chelsea helped create. Be sure to sign the children up for the Kids’ Birthday Club and they’ll receive a certificate for a free kid’s meal during the month of their birthday. They’ll also want to enter the coloring contest where every child is a winner.

Because this popular spot gets busy, you’ll want to take advantage of the courtesy call-ahead list to speed up any wait time. This is a particularly smart move on Saturday and Sunday mornings and is encouraged any time for parties of six or more.

“We like being the neighborhood restaurant where you know your server and your server knows what you like,” Allison says with a smile. She also takes pride in the strong demand for its catering, a service that has helped to quickly establish Scrambles’ name in Ocala. Allison routinely caters for local businesses, serving creative breakfast and lunch items with that special Scrambles touch.

Rumor has it that Scrambles may be expanding at their current location in the future. That will be just fine with the many regular customers and is sure to draw new faces as well. With its fresh, unfussy, satisfying meals and prompt, cheerful service, this is one Ocala eatery that will remain a permanent favorite.

No, you won’t find scrambled eggs at Scrambles on Friday and Saturday evenings. Steve and Allison wanted to create a dinner menu that would be similar to what they would cook for friends at their home. The result is a surprisingly varied menu with the same delightful service and smiling faces you’d find during breakfast or lunch.

Don’t miss the High Rollers as an appetizer. These fabulous crepes are dusted with Parmesan cheese and packed with spinach, artichoke hearts, and sun-dried tomatoes in a light cream sauce. The Plaza Crab Cakes are also a great starter and make the most of Maryland blue crabmeat.

The evening menu includes many of the popular lunch choices in the omelette, salad, burger and sandwich categories. Special to the dinner menu only are the tantalizingly tender prime rib, Chicken Ocala (a breaded breast that only tastes fried, topped with a lemon-basil sauce), steak, and the Harvest Apple Pecan Pork Loin (a thick slice of tenderloin marinated in apple butter and brandy that has been sautéed and finished with a cracked pepper pecan cream sauce).

A seafood special is always offered. On the night we dined, it was a hearty swordfish steak topped with Lobster Thermidor.

An assortment of beer and wine is available to complement your dinner selection. The Niles have found several delightful reds and whites, as well as a sparkling and blush wine.