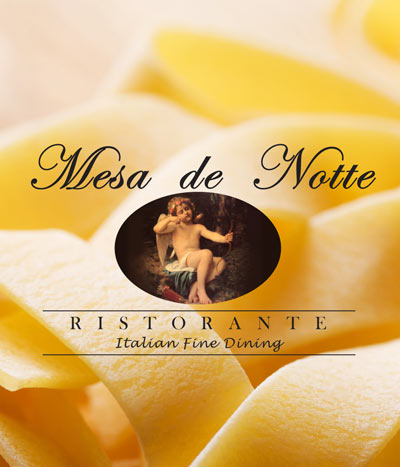 Four years ago, José Moreno, owner of Moreno’s Uptown Grill, dreamed of giving his customers a fine dining experience where they could enjoy homemade Italian cuisine in a romantic atmosphere. Now, with a delicious menu inked on parchment, warm beiges and twilight reds picked out for the interior and a golden banner reading “Mesa de Notte Ristorante,” Moreno’s vision is well underway. “Finally,” Moreno says, “my dream is coming true.”

Originally a chef in Miami, Moreno moved to Central Florida in 1998 after Ken DePasquale, owner of Carmichael’s, offered him a job. Moreno eventually opened Uptown Grill in 2007. For its debut as Mesa de Notte, the restaurant will be getting a makeover to set its fine dining flavor. Though the carpeted floor will be replaced with an espresso-shaded tile, one thing that won’t change is the restaurant’s promise of quality to its clientele.

An evening at Mesa de Notte might begin with a glass of vino from the extensive wine menu and the tuna carpaccio as an appetizer. After soup and a salad, guests can choose from a plethora of entrées. If seafood is what you desire, the grouper francese and sea bass are only two of the several dishes Mesa de Notte has to offer. For those who cry fowl, the roasted duck is a Moreno favorite. Among the usual pasta fare, such as manicotti and baked lasagna, standouts include agnolotti katerina—a spinach and ricotta cheese ravioli in rich homemade pink sauce—and the restaurant’s farfalle, which is a bowtie pasta with Italian sausage, sundried tomatoes and mushrooms in a light garlic brown sauce. Complete your meal sharing zabaglione, a creamy vanilla sauce, with wild berries, or the tiramisu.

Moreno thanks Uptown Grill’s loyal customers for their support and welcomes them back for a romantic evening at Mesa de Notte.