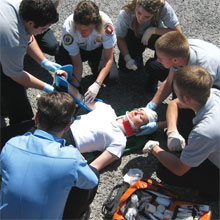 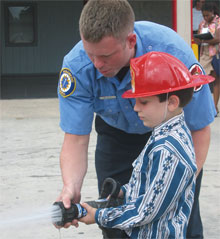 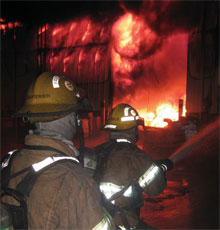 It takes a firefighter 90 seconds to put on 90 pounds of firefighting gear. It took me 15 minutes. And that was with the help of two firefighters!

Outfitted in full bunker gear — coat, pants, boots, protective hood, helmet, gloves, airpack — the first challenge is climbing up into the fire truck without tumbling backwards from the weight. That done, there is no time to gloat.

The next trick will be getting out without falling face first when we arrive at the fictitious burning building. Somehow remaining upright, I am reaching up and grabbing the fire hose, bringing the airpack’s face mask down and hurrying as quickly as I can toward the building.

Instructed to get down, I’m crawling across a concrete floor, dragging the fire hose along and pretending we are in a building engulfed in flames and smoke. Firefighter Rob Graff is behind me, holding on to my right ankle, pushing me along, as we make our way to the back door.

Weighted down by the gear, I am moving in slow motion and it is seemingly taking me forever to get to that door. Finally there, Graff uses his gloved hand to check the door’s surface heat and then nods at me as he opens it. Already up on my knees, I sit back and pull the hose lever and a torrent of water gushes out to extinguish the imaginary fire.

Mission accomplished. On to the next training operation.

Firefighter Joseph “J.J.” Smith has brought the ladder truck from Station No. 17 and maneuvered it in the front of Station No. 10. He has deployed the 110-foot metal ladder to 85 feet at a slight angle over the fire station’s roof. At that height, it is safe for two firefighters to climb up. I tilt my head back and squint up, deciding that 85 feet is plenty high enough for me. If this was a fire in progress, the task would be to climb the ladder to the roof to ventilate hot gases and smoke, as well as rescue anyone trapped inside.

Except for the airpack, I remain in the bunker gear to climb the ladder. The airpack would stay on a firefighter, but for my own comfort and as a safety precaution, I am allowed to remove mine. But I also gain a leather safety belt with an attachment hook. Feeling suddenly so much lighter, I clamber up the truck’s platform, put my foot on the first rung while gripping the ladder’s railing and start the climb. Graff is right behind me.

It’s a breezy day and I can feel the ladder swaying the higher we go. It doesn’t help that the ladder also gets narrower about midway up. But, ever so slowly, we continue upward. When we reach the red rungs at the top and I stop, I realize I’m smiling. Twisting and sitting back, Graff shows me how to hook up to the ladder railing. This would keep me from falling should I slip, which I don’t plan to do. I quickly decide to find out if the hook works.

After a few minutes of chatting and happy with the state of the roof, we unhook and begin our descent. For some reason, I find myself being even more cautious going down, paying particular attention to where I’m putting my feet on the rungs. I guess I’d rather look forward than back.

Soon enough, we are back on firm ground. I’m all the better for it.

The plan was to play firefighter for a day. The reality is that being a firefighter is anything but play. Even the training is hard work. No fire, no smoke, no danger, no life-saving decisions — just an hour of basic hose and aerial operations training — and I’m exhausted.

For the five-man, C-Shift crew of Marion County Fire-Rescue’s Station No. 10 in The Villages of Marion, it was but one hour of their 24-hour shift. Know that quaint, Norman Rockwell image we have of the fireman rescuing the cat stuck up in a tree? Forget it. Today, kitty might have to fend for himself.

These days, being a firefighter is a lot more complex. In addition to fires, they are frequently the first responders to traffic accidents, medical emergencies, terrorist and hazardous materials alerts, technical rescues, and natural disasters. It’s a tough job. But for District Captain James Banta, Station Lieutenant Robert Graff, EMT/Firefighter Josh Alvarez, Paramedic/Firefighter Tom Reeves, and EMT/Firefighter Ben Tyre it’s more than that. For them, it’s not just what they do — it’s who they are.

They work 24-hour shifts with 48 hours off, spending one-third of their lives on duty. They’ve already put in thousands of hours studying and training to become state-certified firefighters, emergency medical technicians, and paramedics. Gone are the days of just being a professional firefighter.

The Man In Charge

With 12 years experience, Captain Banta has seen the gradual changes in his chosen profession. “It’s for the better,” he says. “We can better serve the community by being able to provide more complete emergency services.”

Banta, 32, began his career as a volunteer firefighter and now as a South District captain oversees five stations. A paramedic and past State Firefighter of the Year, he has 25 firefighters under his command. Banta works the same shift as his station crews, sharing South District duties with Captain Rita Reahm and Captain Dan Clifford.

“My job is to keep operations flowing smoothly at a situation by communicating and coordinating with my crews,” he says. “When we are called out, we arrive usually at the worst moment in someone’s life. You can experience life and death in the course of one day.”

It is the desire to help people that leads most firefighters to their chosen profession, and it was a feeling of helplessness that pointed Rob Graff in that direction. Although his grandfather had been a firefighter, it was coming upon a traffic accident scene that was life-changing for Graff.

“I was 20 years old and not sure what I was going to do with my life,” says Graff, whose father and three brothers are police officers. “I had a catering job at the time and was driving home one day when I saw a car accident happen. I rushed over to help and then realized I didn’t know what to do. It was a terrible feeling.”

Graff stayed on the scene when firefighters and paramedics arrived. “I was so impressed by what they did,” he recalls. “And that’s when I decided that’s what I was going to do.”

Ten years later, Graff is a self-professed geek of all that involves firefighting. “I love what I do,” he says. “Anything and everything that has to do with being a firefighter, I want to know about it and I want my crew to know about it.”

As the station lieutenant, Graff plans the daily training schedule, makes the role assignments to each of his crew, and, when on the scene, it is his job to quickly evaluate the situation and communicate with his crew and captain.

Banta and Graff currently have a relatively new group of firefighters to work with at Station No. 10. But all possess the same level of dedication and skills required of the difficult profession.

Tom Reeves, 29, is a paramedic/firefighter. He was a paramedic for nine years before becoming a firefighter and joined MCFR two years ago. Josh Alvarez, 28, is also an electrician and was previously a volunteer fireman. Currently an EMT, he will soon become a paramedic. The new kid on the block is 21-year-old Ben “B.J.” Tyre, who also has a grandfather who was a fireman and a father in law enforcement.

Although a new team, the camaraderie is evident. When not out on a call, they live at the station, sharing meals and training time. In addition to situational training, there is also a 30-minute circuit workout wearing bunker gear and utilizing firefighting tools. And that has nothing to do with getting in shape to pose for a firefighters’ calendar either. Firefighters have to be physically fit to do their jobs with speed, precision, and efficiency.

There is a reason for all of this togetherness. Operating in stressful, dangerous situations, each member of the team has to know they can count on each other. It could mean the difference between life and death. Literally.

Every day, that’s the reality of being a firefighter.