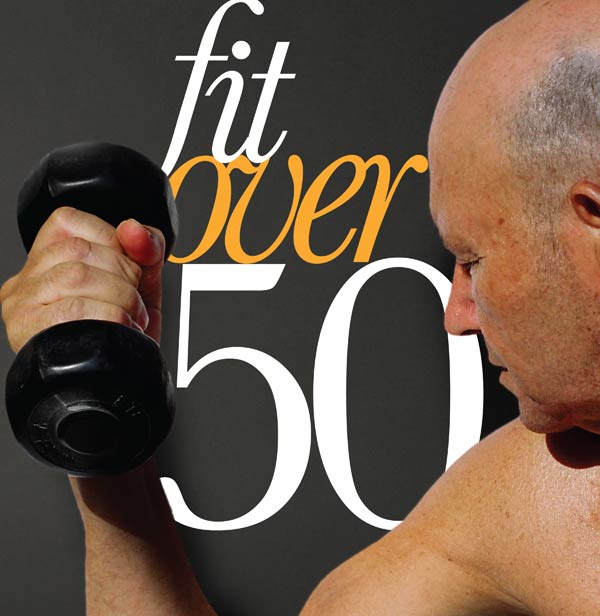 What sounds better—two hours sitting in a doctor’s waiting room or a two-hour bike ride on a picturesque trail? How about a regimen of prescription drugs versus a dose of endorphins at the gym?

Most people have a choice, according to Dr. Walter Bortz, a geriatrician and former president of the American Geriatrics Society. Healthy living begins with a positive belief system and continues with an action, says Bortz, who has completed 39 annual, consecutive marathons.

Bortz, 79, shows by his own example what people can do when they set their minds to a goal. He calls the process a “self-fulfilling prophecy.”

“You have to believe that you can be good when you’re old,” he says. “If you say you’re going to be riding mules up a mountain, you will be. It’s all about believing in yourself.”

In Marion County, seeing seniors out on the trail or diving into a community pool is not uncommon. Rob Coutu, a certified athletic trainer at Mid-Florida Physical Therapy, says half of his patients are of Medicare age and still consider themselves to be very active. He encourages them to try new things every day.

“People in their seventies think there’s nothing left to do, no goals to set,” Coutu says. “If they have goals, then that’s great. When they meet those goals, they learn how to set new goals. They learn how to do things they never thought they’d be able to do.”

Meet several senior athletes who have agreed to take time out of their busy daily workouts to share their personal stories of success. 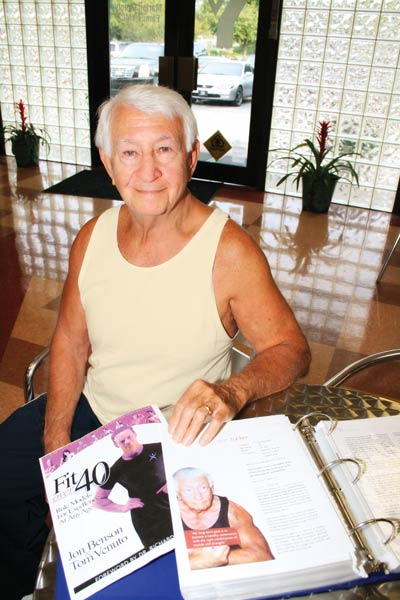 Don Tucker believes his goal to become “a healthy centenarian” with the “right combination of muscle and strength” is reasonable.

A former certified personal trainer for World Gym, Don’s self-imposed fitness plan includes five small meals a day, a regimen of vitamin supplements, and workouts three times a week at the YMCA. He runs on a treadmill, lifts weights, and uses weight-resistance machines.

Five years ago, Don was featured in the bodybuilding manual Fit Over 40: Role Models for Excellence at Any Age. The book, written by fitness gurus Jon Benson and Tom Venuto, includes more than 50 true stories about folks like Don who have made great strides in their exercise programs.

But Don wasn’t always athletic. Thinking back to his childhood, Don says he missed a lot of school because of illness.

“I was a typical skinny, sickly kid who caught every cold, flu, and germ that came down the pike,” says Don. “When I was 16, I was in the hospital having my tonsils removed. A friend gave me a copy of Strength and Health magazine. He invited me to work out with him. It really changed my life.”

First, Don got involved in weightlifting. Then he added a running program, completing a couple of marathons and several half-marathons.

Now 79, Don doesn’t run anymore. He walks the treadmill instead, and he still lifts weights. Don makes sure he gets eight hours of sleep at night and drinks a power drink during workouts. For increased incentive, he records his milestones and inspirational thoughts in a daily journal.

“My goal is to be 102 and be better than I am today,” says Don. “I expect to get better every day. In the beginning I thought it was normal to be sick all the time. Then, when I started feeling good, I realized I shouldn’t have felt bad all those years.” 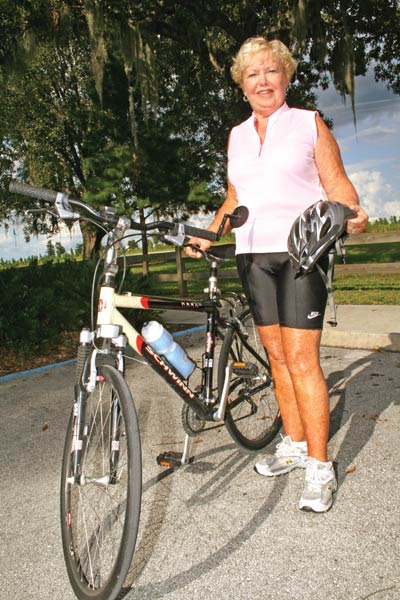 ‘I Could Out‑Exercise Any Of Them’

When she had open-heart surgery six years ago, Pat Ball made up her mind that she wouldn’t let it get her down. The operation involved four bypasses, an artificial valve, and an aorta repair.

A long-distance bicycle enthusiast for many years, Pat, 68, was back on the trail one month after surgery.

“My doctor said I should do whatever my body lets me do. He said I would benefit,” she recalls. “Inclines are harder for me than they used to be, but I had such a peace about it that I never was really frightened. I just felt like I’d be able to do whatever I wanted to do.”

Married 50 years last June, Pat and Tommy Ball started taking long-distance bike trips 35 years ago. They joined a group of seniors who shared their love of the outdoors, and together they biked to Georgia and other parts of Florida. A 200-mile trek was no problem if they split it up over two or three days. For the Balls, a round trip to Daytona made one of the shorter runs—with an overnight stay at the beach, of course.

More often these days, the Balls transport their bikes to other states and explore the off-road trails. The highways are too heavily traveled to be safe, Pat says. Locally, they hit the trails along the Withlacoochee or on the Cross Florida Greenway.

During the week, Pat participates in spinning classes to keep physically fit. On the weekends, she looks forward to the next trail ride in the great outdoors.

“I love the feeling it gives you, but I love the fellowship with the other riders,” she says. “I can outride my own children now. In fact, I could pretty much out-exercise any of them.” 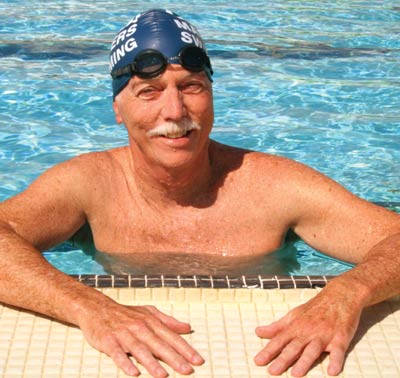 Dane Griffin didn’t plan to be a medal-winning swimmer at the age of 60. As a youth, he swam on the Ocala High School swim team and participated in Amateur Athletic Union state meets. But after graduating from the University of Florida, Dane turned his attention from swimming to tennis.

In 2001, Dane tore his Achilles tendon while playing tennis, so he returned to swimming to stay physically fit. He joined the Central Florida Marlins Masters Program and started traveling to other states for open-water competition. Today, Dane has garnered dozens of medals and ribbons from swim meets.

Among them are three first-place awards in the 200-meter individual medley, the 100-meter freestyle, and the 50-meter butterfly from a Masters’ swim meet in St. Petersburg last July. In August, Dane finished first in his age group in a 2.5-mile open-water swim at Jacksonville Beach. He took second place in a 2.4-mile national competition in Madison, Wisconsin, later that same month.

In addition to the thrill of victory, Dane admits he’s suffered the agony of defeat. He recalls a one-mile open-water event in Elk Lake, Oregon, where the altitude was 6,000 feet.

“I was literally gasping for air,” says Dane. “They held another event there this August, a longer event. I didn’t want to go there again.”

Dane had another surprise during a one-mile open-water national championship in Reston, Virginia.

“I swam too close to shore and hit my head on a dock,” he says, his face flushing slightly. “Then I made a wrong turn. I finished fifth—out of 10.”

Such incidents are rather humbling for a man who placed first in his age group in a 5K open-water in Fernandina Beach in July.

What amazes Dane is how much the sport has changed in the last 35 years.

“All the young swimmers, from Olympians to 10-year-olds, swim faster than we did then,” Dane says. “The technique that swimmers use today involves streamlining and rolling your hips, using the big muscles in the core of your body as opposed to just your arms.”

Looking back at his own accomplishments, Dane insists he just wanted to swim for exercise.

“I never intended to swim competitively,” he says. “Someone said, ‘Let’s go to a swim meet,’ so I did. The rest is history.” 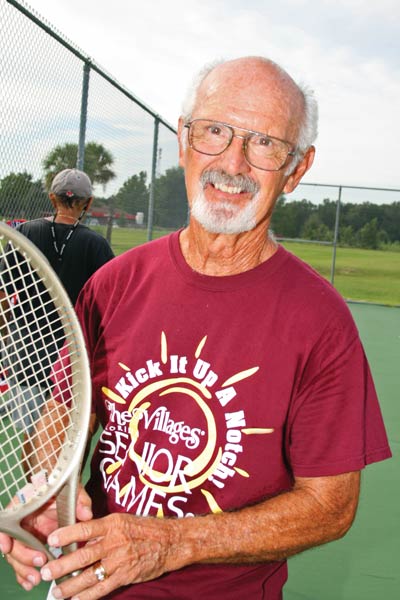 Put a tennis racket in Joe Smith’s hands and then step aside. The 77-year-old Senior Games player moves about the court with the agility of a man half his age.

On a local level, Joe has taken numerous first-place awards for singles and several for doubles with his regular partner, Earl Allen of Leesburg. The two have participated in the annual Senior Games in The Villages and Gainesville, and in Ocala, when they were held here in previous years.

But despite all the medals and trophies he’s won, Joe doesn’t consider himself a major threat to other players.

“I don’t have the killer instinct,” he says. “I play for the fun of it, but winning is best. You always feel better when you win.”

A side benefit, of course, is the exercise. Joe says he hits the courts at seven every morning with several of his buddies. A lot of bantering goes back and forth during play, but now and then, they get serious about slamming the ball over the net.

A self-taught tennis player, Joe says he learned by watching other players. Now he’s reaping the benefits of the sport.

“I think sports are 80 percent mental,” he explains. “You have to have some ability to play, but you also need to know what to do, which way to move, and when to move.”

As for retiring from the game?

“I have no target date,” he says. “When you’re retired, it’s easy to just sit in front of the television and wither away. Instead of that, I play tennis.” 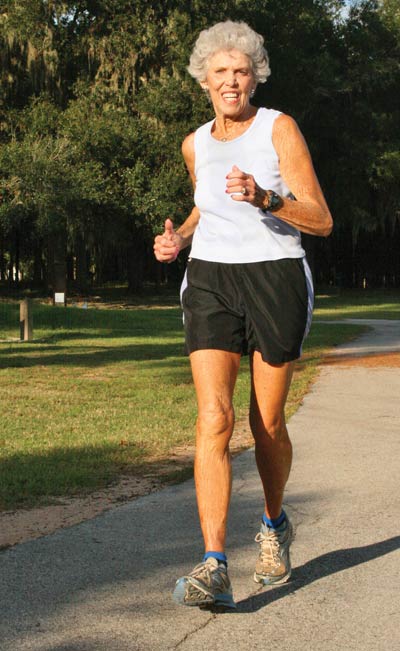 ‘A Lot Of Energy’

A distance runner since her mid-forties, Nancy, 74, participates in 5K and 10K races both locally and in other cities. She has won numerous gold medals in her age group.

“I’m not doing it for the medals,” Nancy insists. “I’m doing it for my own satisfaction and what it does for me. I may go out there and feel stressed, but after I run a while, that plateaus, and there’s a certain peace that comes over you. Your endorphins kick in and you’re relieved of the stress that you felt.”

Nancy placed fourth in her age group in the Disney World half-marathon (13.1 miles) in January. While training for the race, she ran four to eight miles every day after work. That’s right—she still works a full-time job at a local law office. She also ran 13 miles on most Saturday mornings at Jervey Gantt Park.

But running is about more than just getting ready for a race, Nancy says.

“I always meditate that the Lord will help me do the run and that I will have a smile on my face and a song in my heart,” she says. “I have met so many nice people out there. Men and women tell me I’m their inspiration.”

Nancy also cross-trains on a bicycle, but running has affected her life the most, both physically and mentally, she says.

“It has enabled me to do a lot of things with my grandchildren,” Nancy explains. “I have a lot of energy.”