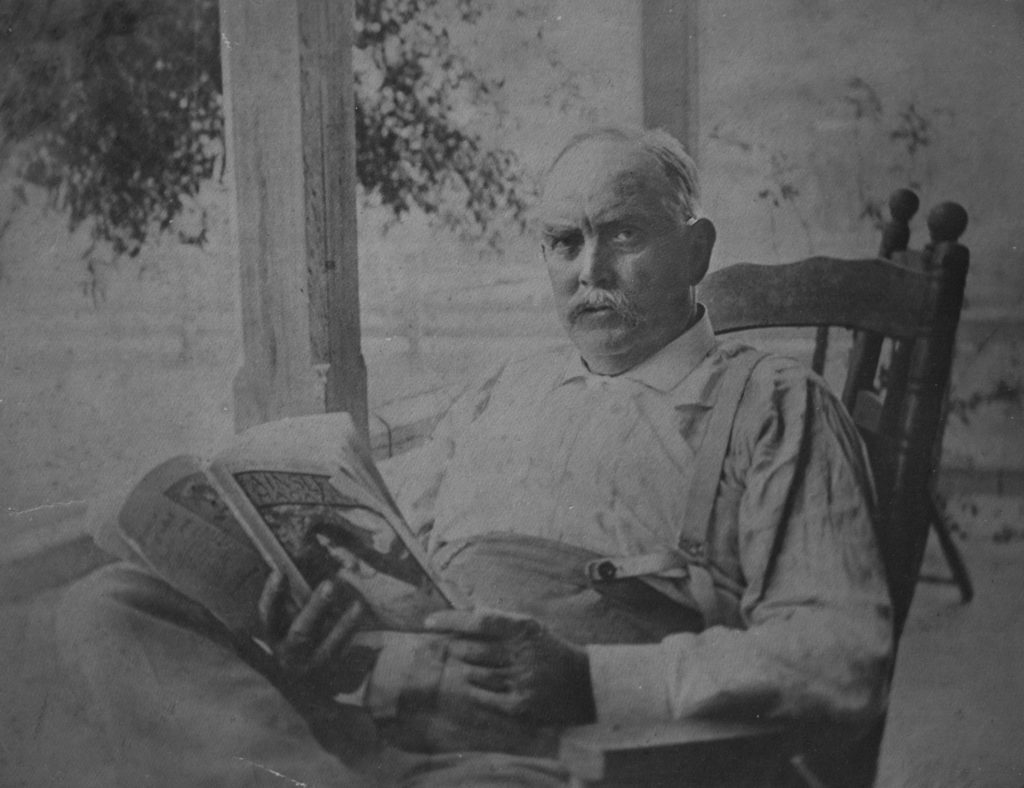 It’s become trendy to discover your family history. Websites such as ancestry.com and 23andMe.com and televisions shows like Who Do You Think You Are? testify to the fact that people want to know their genealogy.

For one local family, such searching isn’t necessary. Their history has been recorded in written form for centuries.

On a mild spring day, Gene Camp, 71, and his son, Kevin Camp, 45, sat down and shared tales from a family background rich in remarkable endeavors and fascinating facts. The Camps can trace their heritage all the way back to 17th century Scotland where the family’s name was originally Campbell. What this family has accomplished since coming to America could fill a book… Actually, it has.

The Timber Tycoons, written by Parke Rouse, Jr., tells the story of the Camp families of Virginia and Florida from 1887 through 1987.

When the couple began their family, it was the continuation of a legacy created by Gene’s grandfather, who realized in the early 1900s that Marion County was an ideal place to raise kids.

Gene and Tricia raised their children, Kevin and Kristen, in Ocala but spent much time at their house on Lake Weir where they enjoyed boating and skiing together.As adults, Kevin and Kristen have continued the lake tradition with their families. Kevin and his wife, Kimber, have three daughters, Kayla, Callen and Colbie. Kristen and her husband, Todd Clifford, have a son, Camp, and a daughter, Ainsley.

Gene, along with Kevin and their partners Merritt Fore and Merritt Fore III, own and operate a number of Burger King franchises in Ocala, as well as in Knoxville, Tennessee.

The land where City Hall now sits used to be owned by the Camp family, as was much of downtown Ocala. At one point, the family owned 65,000 acres in the Dunnellon area, which was later developed into Citrus Springs.

The Henry Camp Golf Tournament, held every spring at the Ocala Municipal Golf Course, is the state’s oldest amateur golf tournament and was named after Gene’s uncle.

Gene’s uncle (his mother’s brother), Cecil Farris Bryant, was the 34th governor of Florida and was in office from 1961 to 1965. The Bryant House in Ocala, currently home to Historic Ocala Preservation Society (HOPS) was formerly owned by his grandfather, Cecil Bryant.

After the first Camp family members left Scotland and arrived in the American colonies in 1663, they settled in Gloucester County, Virginia, and began going by the name Camp instead of Campbell.

By the late 1800s, Camp Manufacturing Company was a booming lumber and paper business with sawmills in four different Virginia towns, including Franklin. The Camps in this town bought up large tracts of land after the Civil War when acreage was cheap. Among their purchases was 40,000 acres of the Dismal Swamp, an aptly named densely wooded area of Virginia that George Washington once owned with fellow investors. (The Dismal Swamp land was donated by Union Camp Corporation to the Nature Conservancy in 1972.)

Born in 1847, William Nelson Camp, Gene’s great grandfather, was widely regarded as a bit of a maverick, which no doubt aided his cause as he became a brilliant businessman and investor. Some of his projects were so innovative for the times that people referred to him as “that crazy man from Virginia.”

He had a knack for purchasing land and turning a profit, but unlike other Camps, lumber wasn’t his thing. He headed to Florida where he achieved great success mining phosphate, building hydro-electric power plants and raising cattle.

William Nelson Camp and his wife, Texana (“Texie”), settled in Albion, a little hamlet northwest of Gainesville, in 1891. They had nine children, two of whom died young.

It was the phosphate boom that enticed Camp to leave Virginia for the wilds of Florida. In those days, phosphate, which was used for fertilizer, baking powder, sulphur matches, medicine, toothpaste, cattle and poultry feed, was dug from shallow, open mines by shovel-like skids pulled by mules. These early efforts were later replaced by steam-powered shovels.

Camp had long been fascinated with harnessing water power, having traveled to Europe to study diking systems and then building a dam in Roanoke, Virginia. When he realized deeper phosphate mining was possible with the use of electricity, he built Florida’s first power plant, the Withlacoochee hydro-electric project near Yankeetown in 1909. (After Camp died in 1911, his children sold the company to the newly formed Florida Power Corporation for $1,500,000.) 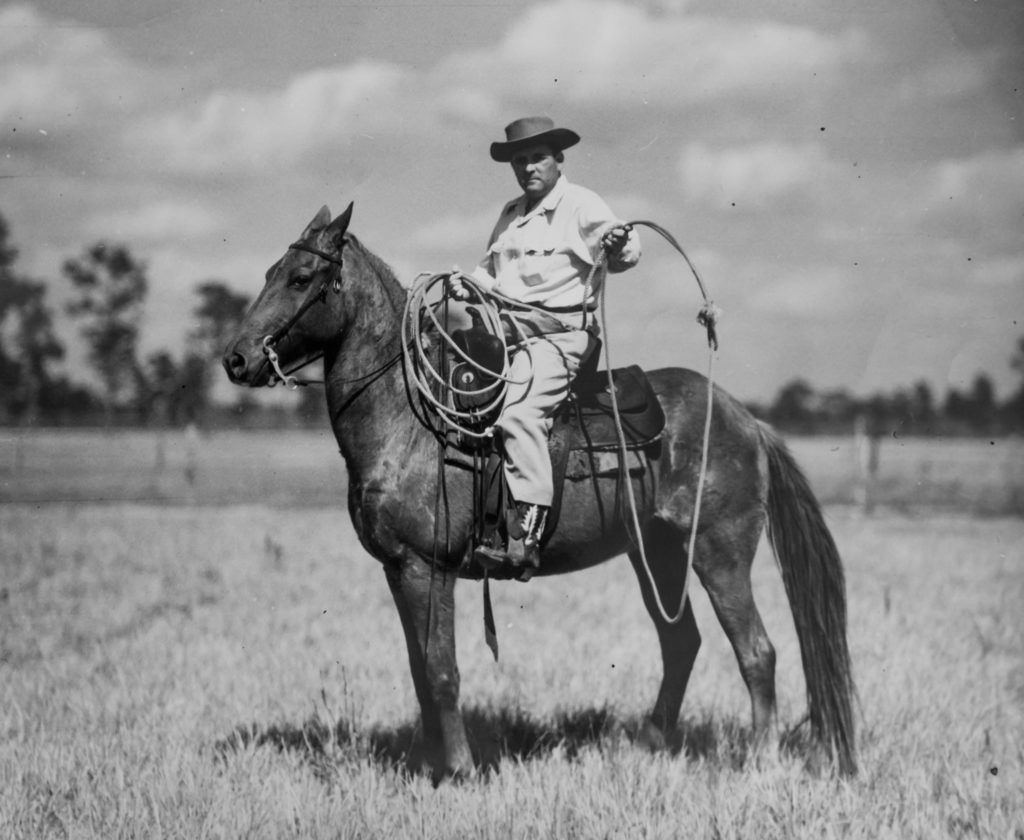 By 1903, the Camp family had moved to Ocala and built a sprawling Victorian house on Fifth Street south of 11th Avenue and north of 9th Avenue. The town afforded more educational and entertainment opportunities for their teenaged children and was closer to the phosphate mines in Dunnellon.

It wasn’t long before Fifth Street was known as “Camp Heights,” thanks to the various Camp family members who built homes there. (Although no Camps live in these houses today, the homes still stand.) William Nelson and Texie’s eldest son, Clarence, was an avid golfer who owned a nine-hole golf course on 11th Avenue. The clubhouse he built amid majestic oaks remains to this day.

By 1907, William Nelson Camp was Florida’s largest landowner, with some 150,000 acres to his name.Among his land purchases was an extensive section—some 17,600 acres—between Ocala and Gainesville known as Payne’s Prairie. The swampy land came cheap: between three to 10 cents per acre. He’d hoped to generate electric power there but realized it wouldn’t be cost effective. Instead, he turned it into a ranching enterprise, renting the prairie to cattlemen, such as the Lykes Brothers of Tampa, for fattening cattle for $5 per head before they were later shipped out of Gainesville by railroad.

Many people don’t realize Florida was “open range” until the 1930s, meaning fences were prohibited, so cattle roamed and grazed freely.

When the elder Camp died in 1911, ownership of Payne’s Prairie passed to his son, Jack, who stocked the land with his own cattle, raising 2,000 calves each year. He planted hybrid grasses and cut canals through the marshes to lower the water level and allow for year-round grazing.

Upon Jack Camp’s death in 1938, his sons, Henry and Clarence “Mank” Camp II, took over. (“Mank” was short for “little mannequin,” a nickname because the boy weighed less than 5 pounds when born in 1909 and, remarkably, survived.) Henry and “Mank” purchased even more land, expanding the ranch to 43,000 acres. (The town of Silver Springs Shores was later developed on part of this acreage.)

In a humorous aside, “Mank” Camp pledged the Sigma Alpha Epsilon fraternity when attending the University of Florida. As part of the traditional hazing, the fraternity brothers left him naked and blindfolded on Payne’s Prairie late one night. Of course, they had no way of knowing he’d grown up on this land and knew it like the back of his hand.

“He got the blindfold off, walked to the caretaker’s house to get clothes and a ride and was back in Gainesville before the guys even returned to the frat house,” relates Gene with a chuckle.

It was there on Payne’s Prairie that Gene grew up, working cattle, hunting and fishing. A “country boy” in every sense of the word, his was the last Camp generation to be raised on the prairie.

In 1970, the Camp family sold Payne’s Prairie to the state, and the following year it became Florida’s first state preserve. It’s now recognized as a National Natural Landmark.

Jack and “Mank” Camp earned most of their money not from cattle but from mining limestone, establishing Camp Concrete Rock Company near Brooksville in 1925. That limestone was used to build Florida’s early highways and even Daytona Speedway. After the United States entered WWII, it was Camp rock that helped build MacDill Air Force Base in Tampa and other airbases. 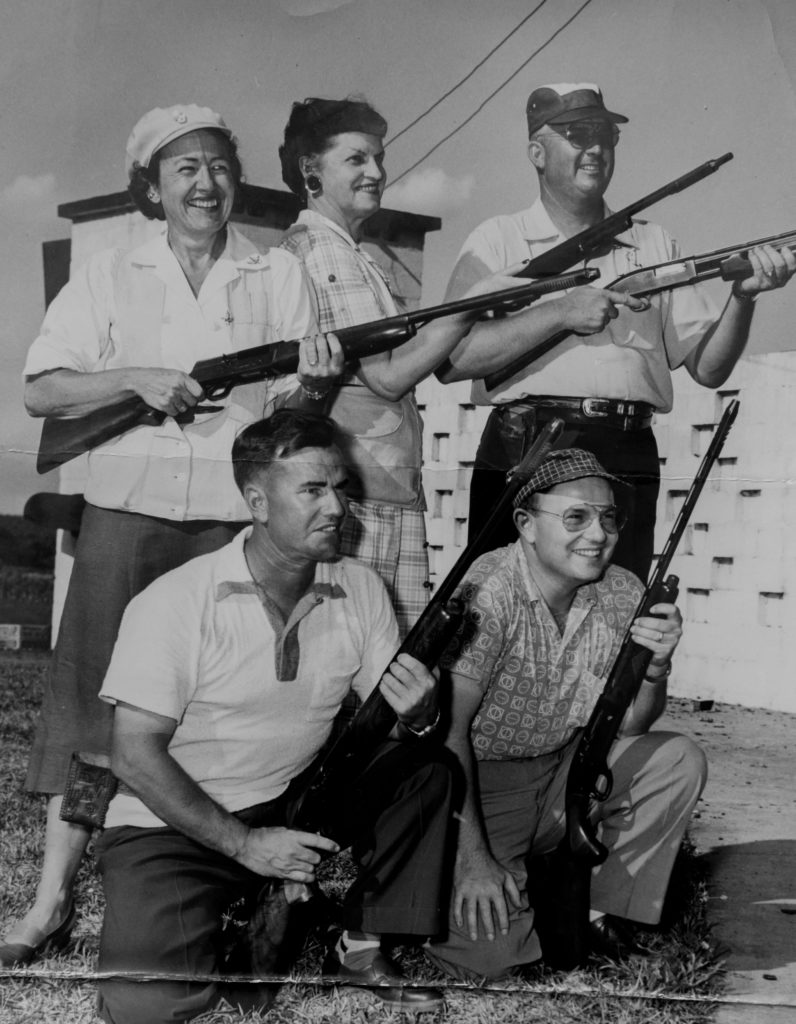 Gene’s mother, Louise (“Weezie”) Bryant Camp, was highly involved in the community. She launched Girl Scouts of Marion County in 1937 and was one of the founders of Pilot Club, a women’s group started in 1942 to support the war. She was also the first chairman of the board at Happy Hearts Preschool at First Presbyterian Church in Ocala. (This tradition has remained in the Camp family, as Gene’s wife, Tricia, and Kevin’s wife, Kimber, were both also chairman of the board.)

“Mom did leather work and always decorated to the nines for Christmas, creating intricate gingerbread houses and handcrafting many of her own holiday decorations,” recalls Gene, thumbing through an old Girl Scout scrapbook of his mother’s.

Weezie Camp was an avid horsewoman, and both she and “Mank” were world champion skeet shooters. Sadly, she died of a brain aneurysm at age 43 while attending a shooting tournament in Jacksonville in 1957. Gene, who was just 9 at the time, still has the guns she used in competition.

Kevin Camp looks up from the piles of old photos strewn over the library table in his father’s office.

“I’ve always been proud to be a Camp,” he smiles. “My dad won’t promote himself, but the fact is he’s really a self-made man. The Camp family heirs had grown to such large numbers by the time Dad got out of college that he never fully benefited from the family money. When he graduated, he was supposed to take over running the Payne’s Prairie ranch and the rock company, but because of family disagreements, this never happened.”

Instead, Gene obtained a loan from his dad to purchase his first business. In 1970, he bought a small, bankrupt auto parts store, opened Standard Auto Services and developed it into a lucrative business.

His investments in real estate and the Burger King franchises came 18 years later.

Gene and his sister, Texana Gay, are the only “older” Camps now living in Ocala. Their brother, Jack, raised his family in Jacksonville and resides there still.

One Camp family business remains, Manko, a mining company in Holder, Florida, that harvests colloidal phosphate, which is sold as organic fertilizer. Kevin is the president of this company named after his grandfather, “Mank” Camp.

Gene studies a photo in a scrapbook of his uncle, Henry, riding a cow pony on Payne’s Prairie. A smile passes across his face.

“It’s neat that we have such a long, traceable family history,” says Kevin, clapping his father on the back.

In a world where families are too often broken and scattered, it’s comforting to see one that has roots and to know those roots will continue to grow deeper. Right here in our hometown.