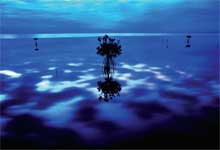 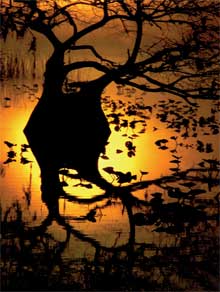 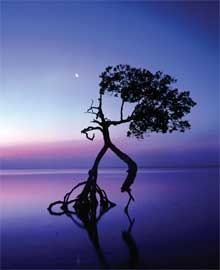 Most important artists (and that includes photographers) specialize in some special subject matter, form, or technique that sets them apart from others and compels viewers to seek their work.

Take Joel McEachern, a photographer who now lives in Central Florida and works at his craft early in the morning before most of us are awake. He calls his efforts “First Light,” referring to the time he shoots his subjects. You might call it crack of dawn, but to McEachern it’s the first moment light appears in the bays, basins, and marshes of any spot he chooses somewhere in Florida.

He snaps his camera’s shutter without using a filter on the lens or relying on special effects. In fact, in this day and age, when most photographers are using digital cameras for their work, McEachern doesn’t even own one. His instrument of preference is an old 35mm Canon, the kind you can’t find in camera shops anymore. McEachern haunts pawnshops looking for them and is occasionally lucky.

Born in Miami, where he first started his “first light” work, McEachern moved to Central Florida eight years ago and has since exhibited his work widely. During this past spring and summer, he enjoyed several simultaneous exhibitions throughout the county and the state.

“Florida is the light of dreams,” he says. “It is and will always be the light that begets dreams. From the builders of New World colonies to the developers of Old World resorts, they have come. And they are coming still. I know — I’m a third-generation native and resident dreamer.”

McEachern says he never touched a camera until he was in college at the University of Florida and his roommate talked him into taking a photography course.

“I really wanted to learn how to use the equipment. After I learned that, I dropped out of the course.”

Instead, McEachern focused on being a psychologist until he realized he had “no business telling anyone about anything.” Back in Miami he got interested in the environment, specifically the Florida landscape.

“I have a very deep attachment to the Everglades because it was the place where I began,” he offers. “It was a good laboratory for me in terms of learning how quiet and subtle Florida environments are.”

McEachern started his first light work in 1988 on a little beach in the southern part of Biscayne Bay.

“It was kind of an open classroom for me,” he explains. “The light teaches you how to do it. It’s never the same two days in a row.”

“It doesn’t give you a lot of choices. You work it one day, and you go out the next day and hope that you have something different. And you always do. But that doesn’t mean that you can photograph it.”

McEachern thinks that first light is a great thing to witness.

“A lot of guys do first light photography, but they start shooting later in the morning than I do. In my work first light is still dark.”

While he confesses that he misses the salt of the ocean and the mangoes, papayas, and avocados that used to grow in his backyard in South Florida, McEachern says he finds Central Florida a very interesting place, too. The lakes, he says, are “moody.”

“The timing of first light is different here. It’s taught me things about my craft that I never thought I’d learn.”

He said that he was expecting to find an older, more ancient place here.

“I didn’t find that, but instead discovered a place that had been mercilessly logged of pines and cypresses.”

Somewhere along the way, Florida became greater then the sum of its parts, its interstates and malls fading into a sparkling of islands set in a vast sweetwater area, he claims.

“There, I became a keeper of the light, my work quietly changing from method to meditation, each frame an honoring of place.”

What emerge in his photos are artistic images of the landscape that intrigue the viewer.

McEachern guards his photo locations, fearing that once discovered by others, they too would soon vanish. He rises at 3:30am and by 4:30 is wading though knee-deep water to wait for the perfect shot. He says people often tell him his photos remind them of how the land looked 60 years ago. His wife Stacy often accompanies him.

When I asked him if I could join them one morning, at least helping by carrying some equipment, he agreed to the idea, but quickly added that he’d either “have to kill me” or have me put in “a witness protection program” afterwards so that I wouldn’t give away the secret locations.

I withdrew my request.

In one of his many shows earlier this year, McEachern linked his work to that of the Hudson River School, a mid-19th century American art movement by a group of landscape painters whose aesthetic vision was influenced by romanticism. Their work depicted the Hudson River Valley in upstate New York and the surrounding area.

“I’ve always been a fan of those guys,” he says. “What I wanted people to be aware of is that every place has a Hudson River and every artist has his influences.

“Their use of light is not so different from what I try to give in my photos,” he continues. “It was easy for them because they could add it. I have to do it on location.”