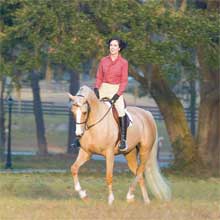 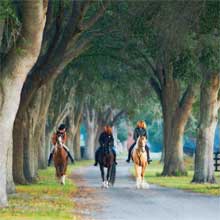 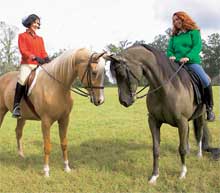 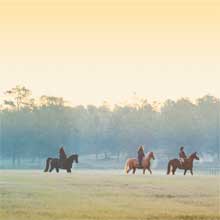 When your passion is your focus, it’s not hard to find joy in each day. For Janeen Barfield, a passionate love of horses and a competitive spirit have evolved into a most satisfying lifestyle. Fortunately for Janeen, her success in the Arabian show world is well matched by the contentment and happiness so apparent in her life with husband Stan and their family.

Stan and Janeen met while flying the friendly skies — he as a pilot and she as a stewardess. Stan is a native of Miami, while Janeen, who hails from Illinois, had relocated to the south Florida city because of her career with the airlines. Still best friends after 27 years of marriage, the obvious chemistry and camaraderie between the two is refreshing.

When the Barfields were introduced to Arabians, they fell head over heels for this classic, ancient breed known for its beauty, intelligence, and versatility and purchased property in the Turning Hawk community of Ocala. They settled on the name Wildfire Arabians after the then-popular song by Michael Martin Murphey.

The horse that made it all happen for the Barfields was NF Proof, a young stallion they had actually purchased as a show prospect in 1987.

NF Proof was born to run. He won his first race by an astonishing 27-1/2 lengths and became an overnight success. The handsome bay went on to win three prestigious Darley Awards and earned the coveted International Arabian Horse Association’s Supreme Legion of Honor in 1990. The following year, the Barfields had the lucrative opportunity to sell their prized racehorse to fashion mogul Paolo Gucci.

Even now, 15 years after NF Proof’s remarkable success, it’s obvious how much of an impact the horse had on Stan and Janeen. His photos claim prominent spots of honor in their gracious home, and they speak of him with fondness.

“NF Proof was a once-in-a-lifetime horse,” Janeen notes. “We enjoyed every minute of it.”

While the racing world was exhilarating, Janeen discovered her passion in the show ring when she began competing in 1987. The walls of her tack room are covered with framed photos of winning horses, along with a flurry of ribbons from shows near and far. Bronzes and trophy saddles she has won are displayed both in the barn and the house.

Janeen doesn’t just show at the local level; she competes at Regionals and the Arabian Nationals every year. All four of her current horses are National Top 10 Champions, and two of these are horses she trained herself. She considers this the biggest thrill of her career because she did everything from start to finish with both horses.

Walk out to the pasture with Janeen as she visits her horses, and it’s easy to see the affection she has for each one. Clearly, they are her close friends, not just partners in the show arena.

“Arabs are very versatile, a wonderfully trainable breed,” she observes.

Janeen is also an accomplished seamstress who makes most of her own riding attire. Her English sidesaddle riding habit even has her grandmother’s tatted lace as trim, just to make it authentic 1890s.

“I love sewing the outfits,” says Janeen, “It’s part of the pageantry of showing and adds another dimension to the whole horseshow idea.”

Unlike some owners, Janeen shows all of her horses herself. At the shows, it’s just Janeen and Stan grooming and getting ready for the classes she has entered.

Stan is perhaps Janeen’s greatest supporter when it comes to the horses, but he is definitely a horse lover himself. He enjoys trail riding and has shown in the past. Stan’s interests extend beyond the horses, however. His great admiration for those who serve in the armed forces has inspired his collection of guns and memorabilia, including a restored military jeep from the Vietnam era, which he exhibits at military vehicle shows.

Not long ago, a friend was teasing Janeen that it would be a fun game to guess how many horses are in the Barfields’ house. Janeen admits it would take too long to play that game. Horses in a wide range of mediums and motifs dominate much of the welcoming interior design in their spacious home. From photos, stained glass and paintings to glass etchings and bronzes, horses are indeed everywhere.

The horse theme even continues into Stan’s office, but here it is joined by winged horsepower, as planes of all sorts contribute to the décor. A commercial pilot for 40 years, Stan started flying in 1965 for National where his first aircraft was a Lockheed L-188. Since then, he has flown a wide variety of planes, including helicopters and the B-24 Liberator, a World War II bomber he flew for fun. Stan was a captain for much of his career, retiring as a Boeing 777 captain for United in 2002.

Everyone needs goals and Janeen is no exception.

“This is not a hobby,” she implores. “It’s my life. I live and breathe these horses day in and day out.”

One of the Barfields’ goals together is to downsize a bit. The 42-acre farm in Turning Hawk is larger than they need and too time-intensive to maintain. They have recently purchased acreage at Via Paradisus, the former Franks Farm property, which is being developed by Glen Lane, who also developed Turning Hawk and Turning Hawk II.

Janeen has already trailered her horses to Via Paradisus to explore the rolling countryside.

“It’s only about five miles down the road from where we live now,” Janeen notes, “and it’s a virtual equine paradise with access to the Greenway. It’s very secluded, with large mature oaks and bridle paths throughout the property.”

Stan and Janeen have no farm employees and do all of the farm and barn work themselves. Having a smaller farm will reduce their workload and Janeen plans to take advantage of that by doing more trail riding with her horses.

Stan’s grown children, Tamara and Todd, and their families live in Ocala and the Barfields love having their “kids” close by. Their six-year-old granddaughter, Alexis, Todd’s daughter, is horse-crazy in her own right, and both Stan and Janeen adore indulging her in this area.

Janeen lights up when talking about her horses, but hesitates to list her numerous accomplishments. Not one to toot her own horn, for Janeen, the show ring is something she does for herself. The fact that she has been successful is icing on the cake, but hardly the reason she continues to compete.

“My own personal best is succeeding with a horse I love. That’s where the fun is,” she explains. “It’s all about the personal relationship between me and my horse.”

Many owners will admit that even their best horse is on the market if the price is right, but Janeen freely confesses that her horses aren’t for sale.

“This is a group of keepers,” she says adamantly. “After owning as many horses as I have — over 50 total — these are the cream of the crop.”

Does that mean she’d entertain the thought of adding to the stable in the future? As she contemplates the idea, Janeen’s eyes begin to sparkle. “That door,” she smiles, “is always open.”