His most important, though, is role model and mentor to the young people who face many of the same issues he did growing up in the small community of Webster in Sumter County.

“Early on, I saw that I could be a positive example,” Clint says. “I try to show kids that they have the potential to achieve anything they want if they stay out of trouble and work hard.” 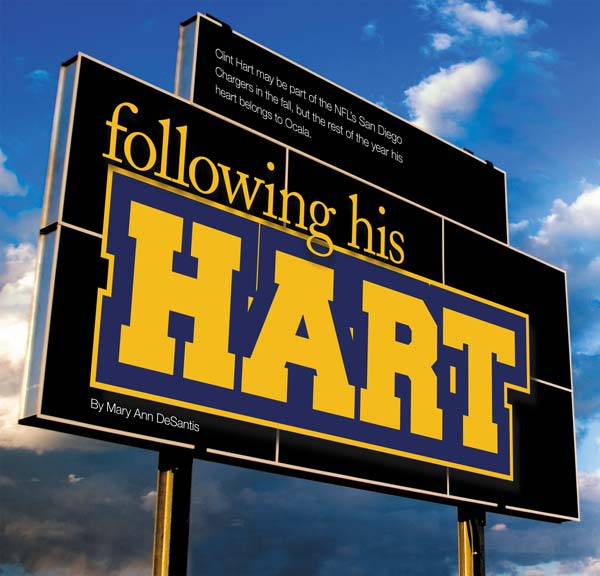 A Charger since 2004, Clint ended his 2007 season with a
career high of five interceptions.
Photo by Mike Nowak/San Diego Chargers.

THAT TYPE OF ETHIC drives Clint and his wife, Ocala native Kelli Fuqua Hart. They’ve spent the past spring and summer renovating a building near downtown Ocala where they’ve opened The Brick House Salon, a dream of Clint’s. They began working to open a second business, Lilli’s Flowers & Gifts, just across the street that is Kelli’s dream.

And, of course, there was Clint’s annual youth football camp in July at his alma mater, South Sumter High School. He also spent several summer afternoons just talking with his younger brother, Keanue, and his friends about making better choices. He managed all this between NFL training camps and staying in shape for his sixth pro season that begins Aug. 9 with San Diego’s pre-season opener against the Dallas Cowboys. 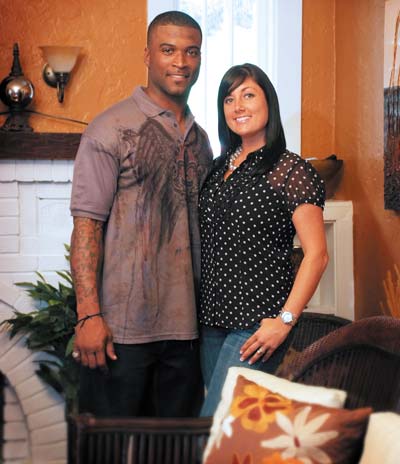 Clint and Kelli Hart were students together at
CFCC and became a couple in 2001.
Photo by John Jernigan.

It’s not surprising that Clint was named the 2007 Chargers Walter Payton Man of the Year. His philanthropy in Webster and Sumter County is well-known. In addition to the youth football camps, he has helped get equipment and shoes for South Sumter players, donated time and resources to the Webster Sports Complex, and helped rebuild the roof on the church that he and his family attended in Webster. In 2006, he started the Clint Hart Foundation to help at-risk children and fund an annual scholarship program.

“Clint is the most significant athlete to come out of our program,” says Inman Sherman, South Sumter High’s athletic director and coach since 1984. “I mean significant in many ways, not just athleticism. He does things that we hope all of our athletes will do and that is giving back.”

When announcing the Man of the Year award, the Chargers described Clint as “both an outstanding contributor to society off-the-field and a player who handles himself in an exemplary fashion while in uniform.”

Those words didn’t surprise Delores Hunt, the Central Florida Community College associate professor who Clint credits for keeping him focused on academics and inspiring him to open his own salon someday. She remembers treating the stand-out baseball player just like any of her other cosmetology students as he pursued a degree in barbering.

“I always tried to remind him that there was a reality after sports,” she says. “Star quality is a wonderful draw, but you have to have substance and Clint has that. He is very, very smart—and he’s extremely kind.”

Clint’s road to a pro football career was far from typical. After graduating from South Sumter High in Bushnell in 1995, where he played both football and baseball, Clint bypassed football offers so that he could stay closer to home and help his mother to keep an eye on his younger brother.

“My mom created strong family ties,” he says proudly. “Seeing her struggle made me want to make a better life for her and my little brother.” 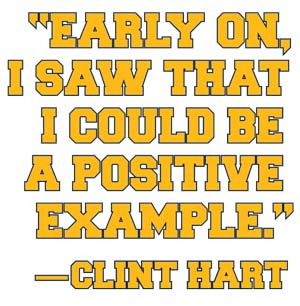 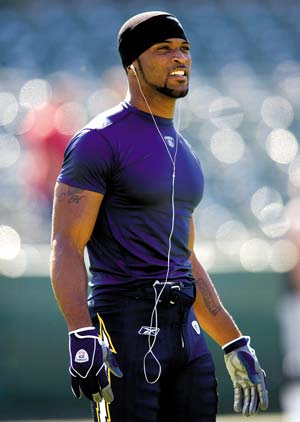 He opted for a baseball jersey at CFCC although he was still known to toss around a football before baseball practice. In the beginning he drove daily from Webster to Ocala for classes and practices. Academics did not come as easily for him as athletics, but he was determined to make the most of his opportunity.

“School was not my forte,” he says. “I had to find something that would help me focus and be fun. That was barbering.”

After graduating from CFCC, Clint still had the desire to play football. He called an Arena Football League coach who had scouted him after high school. Clint tried out and made the roster for the Tallahassee Thunder, enduring 20-hour bus rides for only $162 a week.

By 2001 he was playing for the Tampa Bay Storm and was named AFL Rookie of the Year. National Football League scouts were watching, and Clint soon received a contract from the Philadelphia Eagles. He was sent to NFL Europe where he spent the 2002 season with the Rhein Fire and Amsterdam Admirals before returning to the Eagles’ training camp.

In 2003, Clint’s career took off when he replaced injured Philadelphia safety Brian Dawkins for nine games and made a name for himself. But when a healthy Dawkins returned in 2004, the Eagles waived Hart. Just one day later, the San Diego Chargers picked him up and signed him to a three-year contract.

After a stellar 2007 season, Clint was signed to a five-year deal that will keep him in San Diego through 2012. He is considered one of the NFL’s premier safeties, having finished the 2007 season with a career high of five interceptions, the second highest on his team and the ninth best in the NFL. His most memorable, he says, is the game-clinching interception of Peyton Manning’s pass during the final play of the Chargers-Colts game last November. That 23-21 victory took the Chargers into the AFC Championship game against the New England Patriots.

“We believe his best football is ahead of him,” Chargers General Manager A.J. Smith said in a statement released when the new contract was signed.

Not bad for the 31-year-old who was once told he was too small for the pros. He credits his mother, Kathy Neal of Webster, his wife, Kelli, and “the Man upstairs” for his successes not only in football, but in life.

THE VIBRANT AND friendly Kelli Fuqua Hart was raised in Ocala and never dreamed she’d be a pro football wife. She received both her bachelor’s and master’s degrees in psychology and was working as a counselor at the Marion Youth Development Center in Lowell when her path crossed Clint’s for a second time. Years earlier they met when both were CFCC students.

Clint was spending off-seasons from arena football working with juveniles in the center’s recreation and physical fitness programs.

“We met again in 2001 at Lowell and it just clicked,” Kelli remembers. “We’ve been together ever since.”

The couple has always maintained a permanent residence in Ocala. Kelli and their nearly 2-year-old daughter, Lillian, will return to San Diego at the beginning of the pre-season in August and attend all of Clint’s home games.

“We love to travel and be a part of the big-city atmosphere for a period of time, but we love coming home,” she says. “This is a perfect place to raise our daughter.”

Kelli’s sister, Taylor Fuqua, will manage the salon along with stylist Ronald Reese who Clint met when both were students in CFCC’s cosmetology program.

“Having people we could trust to run the business factored into our business plans,” says Kelli, whose passion for artistic endeavors led her to think about starting the flower shop named for their daughter.

Clint has maintained his barber’s license and occasionally cuts teammates’ hair—and even Kelli’s—when time allows. Not surprising, however, is his desire to find more ways to work with children when he retires from football.

“Although I’d like to open more salons, I also want to start some kind of mentoring program for kids, especially those who are considered at-risk,” he explains. “Kids can relate to people who’ve come from similar situations.”

CLINT TALKS OPENLY and candidly about his upbringing in Webster. He saw close relatives make wrong choices and go to jail. He watched his mother work extremely hard to take care of her children during some very tough times. 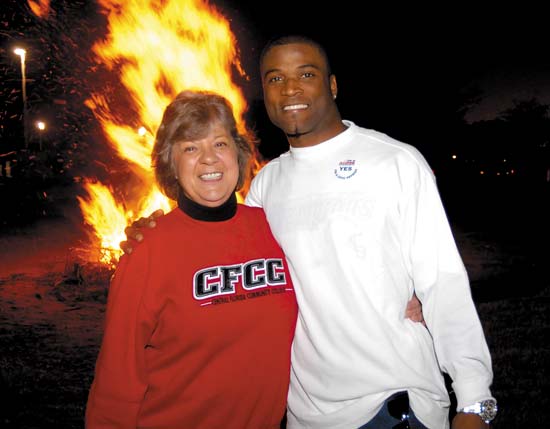 “Star quality is a wonderful draw, but you have to have substance and Clint has that,”
says CFCC Associate Professor Delores Hunt, pictured here with her former student
at the 2008 CFCC Homecoming celebration.
Photo courtesy of CFCC.

“If you haven’t lived in poverty, you can’t tell a child how to cope with poverty,” he says. “If you are from New York City, you can’t go to Webster and tell them how to live in Webster.”

Kelli says that her husband is the “same ol’ Clint” when he goes home to visit friends and family. He even drives the same car he had in school, a 1975 Olds Royale, and spends time sitting under a tree just talking with young and old alike.

“I don’t want people to think I’m better than they are,” he says humbly. “I wish I could take the entire population of Webster to where I’ve been.

“Football has taken me all over the world, and that has motivated me,” he adds. “I talk to kids about having dreams and making the right choices.”

He worries that young athletes in other parts of Sumter County are not benefiting from his annual football camps at South Sumter High. His plans include starting a second camp in Wildwood for young players next year.

“The rivalry between South Sumter and Wildwood made a lot of those players think they couldn’t attend my youth camp,” he says with a smile. “It’s still Sumter County and I want them to have the same opportunities.”

Clint returned to San Diego in late July for the pre-season training camps. The season will be especially busy as the Chargers play the New Orleans Saints in London, England, on Oct. 26—only the second time an NFL team has played a regular season game outside of North America.

Playing in Wembley Stadium will be exciting, but Clint and Kelli are especially looking forward to two games in Florida: Oct. 5 in Miami and Dec. 21 in Tampa.

“We’ll have a caravan all the way from Webster to Tampa,” Kelli says with a laugh. “That will be the big game for us.”

No matter where he plays, though, Clint has his pre-game ritual. He explains the “Psalms 23” tattoo on his left arm.

“My mom always told me to read that Psalm, especially during hard times, and I had it tattooed so I wouldn’t forget,” he says. “I rub that tattoo seven or eight times in honor of my family before every game.

“And then I walk out on the field and say to myself, ‘Wow! These people are here to watch me play football,’” he says quietly. “I’m definitely living my dream.” 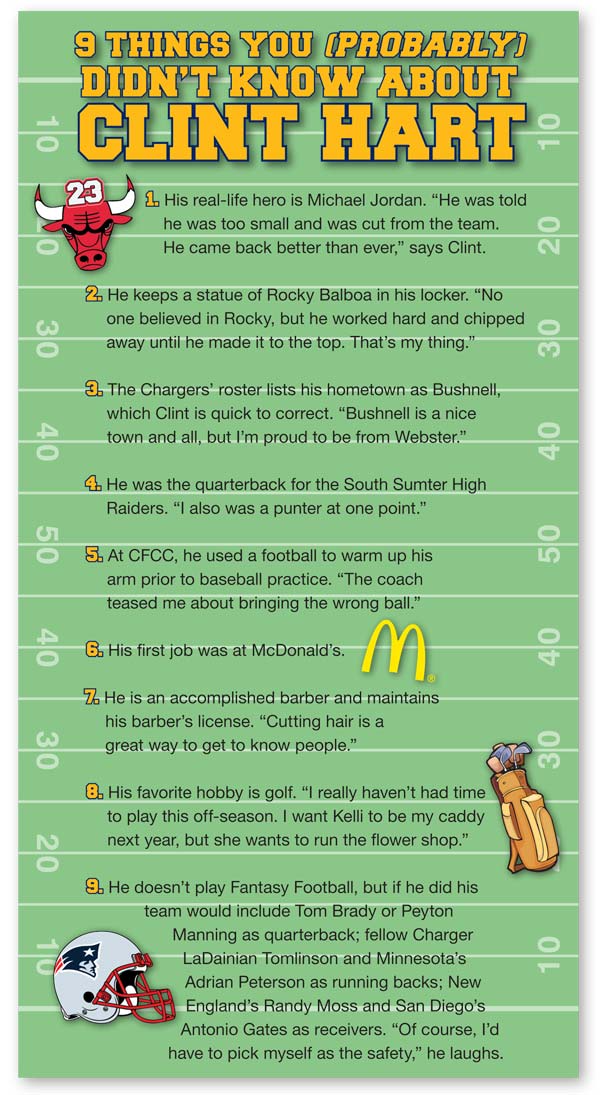