There’s quite a bit of buzz about bees and one local farmer is carrying on his family’s honeyed legacy. 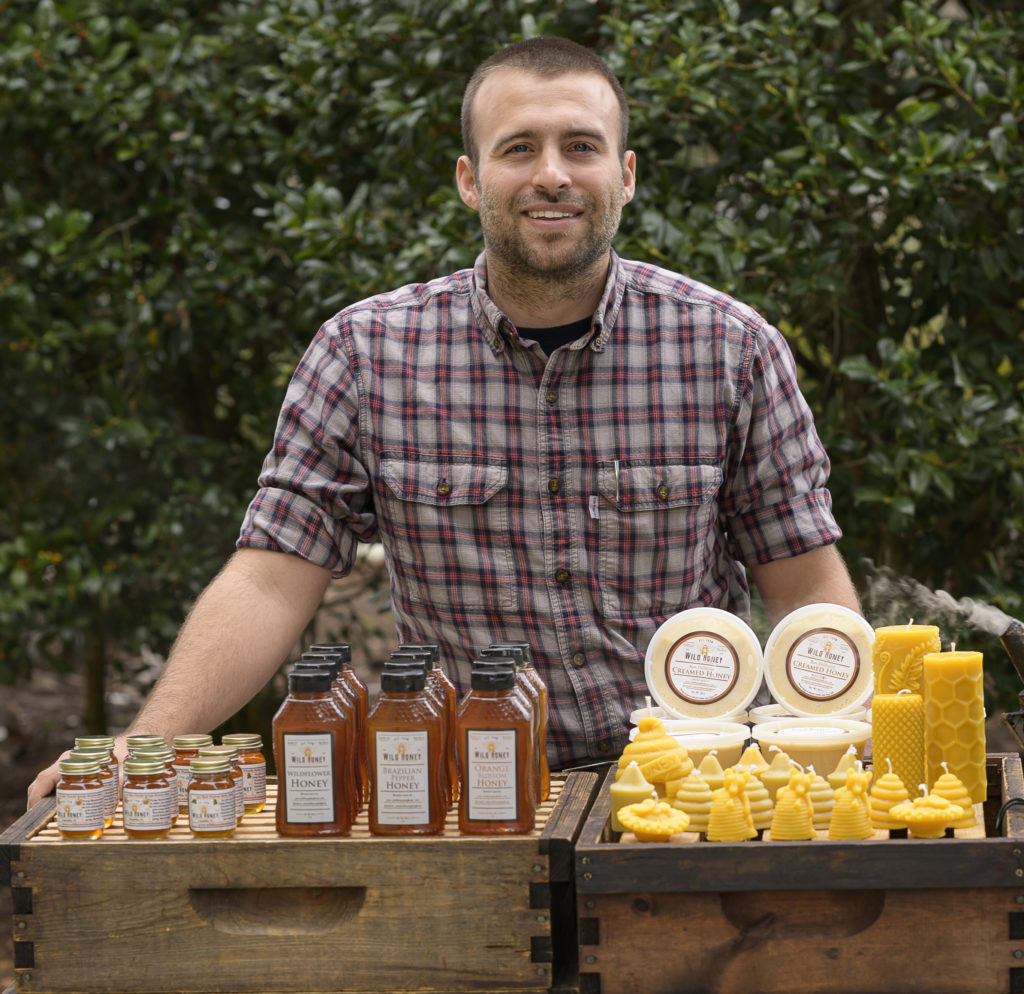 “My grandfather was a beekeeper,” offers 26-year-old Garrett McWilliams of Wild Honey Bee Farm when we encounter him at Circle Square Commons Farmer’s Market at On Top of the World. “He ran around 800 to 1,000 hives. I grew up around him and I have been around bees my whole life. He passed away when I was about 11. Then, when I graduated high school, I decided I wanted to be a beekeeper.”

At that time, all of his grandfather’s equipment was still on the farm in Umatilla.

“Nobody was using it and I wanted to put it back to use,” McWilliams recalls. “So I got about seven hives and learned how to manage them throughout the years and was able to expand to a few hundred.”

With that, he picked up the family business in the same spot where his grandfather had labored.

“That’s where I run my business, out of the same place,” he says proudly. “All our extracting is done there. These are some of his boxes,” he says, gesturing to the vintage, weathered crates he uses to transport and display his wares. “I like to keep bees the old-fashioned way I observed from my grandparents.”

In addition to selling natural raw honey and beeswax candles, McWilliams provides pollination services for farmer’s crops and offers bees for sale. He also has a sweet deal for anyone with choice blooms.

“To eliminate having to feed our bees, we go out and knock on doors and say, ‘Hey, do you mind if we set some bees here? You’re in a perfect area.’ We call it chasing the bloom,” he explains. “And a lot of people are OK with it. They’re like, ‘Absolutely!’ We give them a few cases of honey as rent. In late spring and summertime, it’s wildflower honey, which is gallberry and palmetto. Before that is orange blossom.”

And as the weather turns, so does the path of the bees.

“In the beginning of April, we go to Virginia to an apple orchard and make apple blossom honey,” he continues. “We pollinate the apple trees, because they have a shortage of bees. They rent our hives from us. That’s a service we provide.”

He doesn’t produce as much apple blossom honey as the other varieties and packages it in smaller bottles, which makes it even more sought after.

By the fall, McWilliams and his bees are back to the familiar territory of central Florida.

“Brazilian pepper blooms in the fall, from September to October. We keep following the blooms and that eliminates us having to feed them things like corn syrup or sugar water. That way, we’re always using a natural nectar source,” McWilliams reports. “After that, we get ready to go into blueberries in February.”

His pure beeswax candles are not only beautiful and made from the thin layer of new wax (called capping wax) that bees build over the top of the honeycomb and cured honey, they clean the air as they burn.

“There’s no fragrance in them, but they’re not really meant to smell,” he asserts. “They’re quite amazing and they don’t emit black smoke.”

But the honey is the star of the show and McWilliams reports that he has one variety that keeps people coming back for the health benefits as much as the sweet flavor.

“Wildflower honey is what the locals are after,” he says. “The bees forage from a variety of wildflowers and when you consume pollen/honey from your area, it’s said to help ease allergy symptoms.”

And while he describes his orange blossom honey as a classic, he says his Brazilian pepper honey is a hit among culinary types.

“It’s not spicy; it’s actually a very mild honey that’s still sweet,” he explains. “Many of our customers like to use this honey for baking because it doesn’t have a strong taste, so it doesn’t alter the flavor of what they’re baking.”

The Circle Square Commons Farmer’s Market takes place every Thursday from 9am to 1pm. To learn more about Wild Honey Bee Farm, call (352) 269-1621 or visit www.wildhoneybeefarm.com