Jan Costa is a larger than life guy. With his booming voice and gravelly accent, this self-described “Italian Jew from New York” may not immediately seem like the type who would spend much time on a farm. But Costa and his intriguing story may just surprise you. 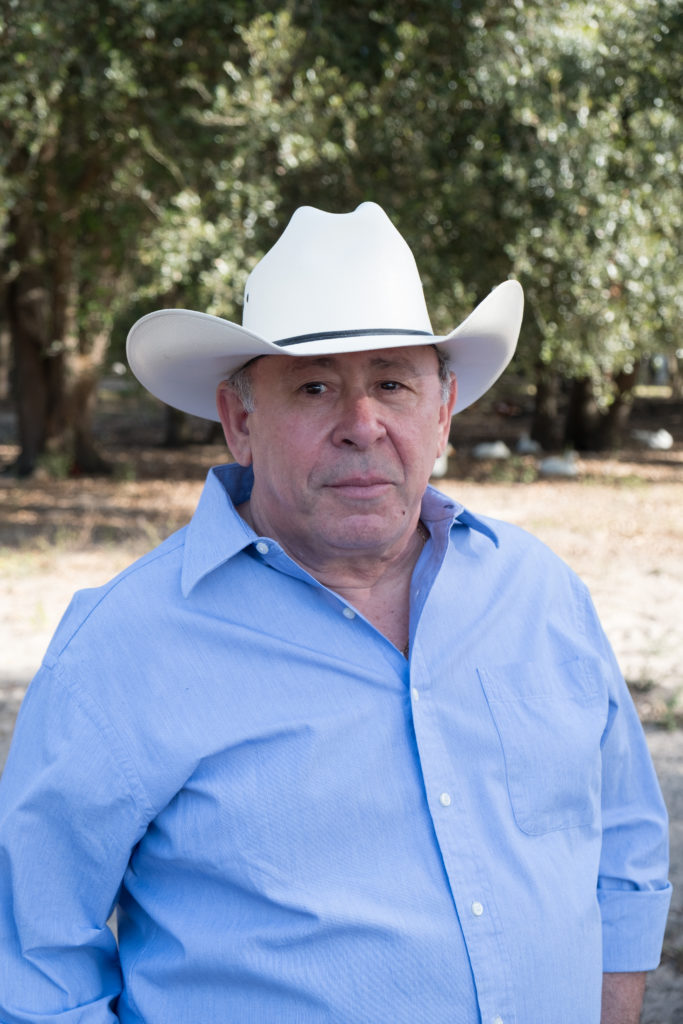 Costa is the owner and driving force behind the Florida Fresh Meat Company—the largest independent “one-stop shop” producer of sustainable and humanely raised local meats in our area. It is a business he has built and grown by engaging a network of independent local ranchers and farmers.

“We are feeding our community from within our community,” Costa likes to say. “Some of the livestock we own, but most of what we do is engaging members of the local community.”

The model Costa has developed for his business is to partner with local farms and create mutually beneficial relationships that provide Florida Fresh Meat Company with meats that are then processed and prepared by his “old school” master butchers. Costa often goes the extra step of training the farmers to adopt sustainable practices, use humane animal treatment and make theirs a grass-fed, pesticide-, chemical-, hormone- and antibiotic-free operation.

“It’s grassroots. Everything I do is within a 75-mile radius of Ocala. And the benefits stay here,” Costa explains. “The whole idea was that the best way to operate is to impact people from the bottom up. So I have families that do this. They earn an income so they can support their family and they feed their community. I’m really the hub. Everybody has to earn. Everybody has to make. I can’t be the kingpin making all of it, with you making nothing.”

Costa insists that he wants his business to be fair, equitable and transparent.

“People know what I charge,” he asserts. “And we put out a great product that’s viable and affordable.”

His network continues to evolve as the business grows. When he ran into an issue with his pasture-raised chicken farm partner, he found a solution through a little divine intervention.

“My brother-in-law ran into a pastor at the feed store,” Costa recalls. “He was raising chickens at his farm and selling at the farmer’s market, but they were having a hard time.”

Scott Moore, who operates Wholesome Conversions Farms with his wife Melanie and daughter Samantha, explains that he was indeed at a crossroads.

“I was headed to the feed mill in Bushnell and I’d been asking the Lord if we should stay in the chicken business,” Moore recalls. “I told him that he needed to make it crystal clear.”

That’s when Moore met Costa’s brother-in-law, Dennis Walton, who received an urgent call, while at the store, to let him know his mother was being rushed to an area hospice. Moore immediately offered to minister to her and went along to pray with Walton’s mother. And while Moore was no longer focusing on the chickens, a connection was made that delivered an unexpected opportunity.

Within days, Costa visited Moore’s farm and they’ve been doing business together ever since. What Moore didn’t know was that Costa also had been praying that day—to find a chicken farmer to replace the one he’d lost. And while tragedy brought them together, kind acts and fellowship led them to a mutually beneficial relationship.

The Moore family went from having 27 chickens in 2013 to about 2,800 chickens today—making them one of the largest chicken farms in the area. Their thriving business specializes in free-range and pasture-raised chickens, turkeys and ducks, as well as chicken and duck eggs. The flock, dutifully watched over by a group of Great Pyrenees livestock guard dogs, is fed an all-natural, antibiotic-free diet.

“It’s farm to table, with no added hormones, steroids or antibiotics,” Moore says of his operation. “It’s as natural as you can get.”

They now process and fill weekly orders for Costa and are part of the Florida Fresh Meat Company “family” business. 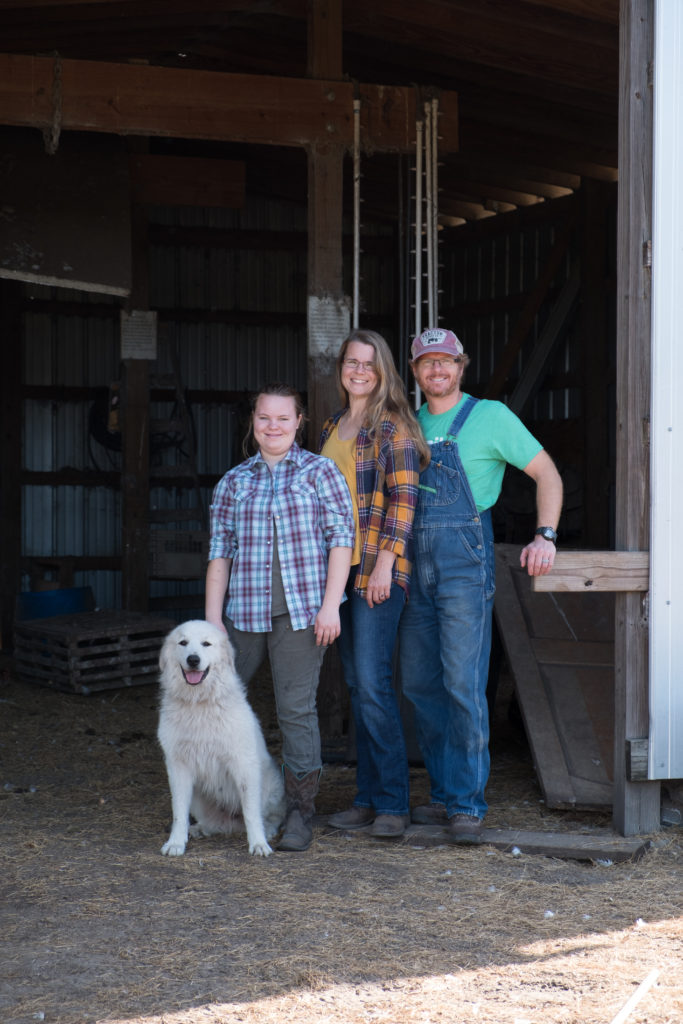 Not surprisingly, how Costa first got into meat production is something of an interesting story.

“I came up from south Florida in 2007 to get away from all the craziness,” he explains. “I’ve been coming to Ocala since the 1970s. My father had been here for 40 years. Then my mother retired from Miami and came up here with her husband. I figured this was an opportunity to get away. So I came up here on a two-year sabbatical.”

But Costa was about to run headlong into an opportunity that would put an end to his quiet central Florida existence.

“I was in Gainesville one day, about 12 years ago, at my rabbi’s house and I was reading an article about the largest kosher butcher and slaughterhouse in the United States being closed down for hiring illegals.”

In fact, 80 percent of the kosher meat in the United States was produced there, so once the plant shut down, there were empty store shelves across the country.

“I’m a businessman,” Costa declares. “So I’m looking at these numbers and thinking, This has got to be a no-brainer! All I know is supply and demand. I was not a farmer, a rancher or a butcher. Long story short, after reading the article, I was ready to get back into business and here was the opportunity.”

He wasted no time and found his site within a week. His headquarters is in Weirsdale, where he operates a licensed Florida Department of Agriculture butcher shop and processing facility.

“Forty years ago, Florida was a beef state. Three of the largest operating plants were producing beef,” Costa explains. “But because it became cheaper to put the animal on a truck and ship it to the Midwest than bring the grain in, we lost it. We became a cow/calf state.”

Costa was determined to bring a piece of that beef business back and within six weeks he opened his kosher meat company.

“I found a local feedlot, hooked up with the University of Florida and flew some guys in from New York to look at the plant. The processor came down, we did the walk around and we got the USDA. It was a very exciting day. You’d think it was Crown Heights here, because we had all the rabbis here walking around and praying..”

But that day, when they processed 10 head of cattle, only four qualified for kosher status. He soon learned that any sort of defect in the animal’s lungs would result in a disqualification and that raising cattle in a feedlot would mean consistently coming up against the same issue.

“So here I am with 10 head, only four qualified, and only the front is kosher. Twenty-five percent of the meat is presold to guys in Miami. So I’m trying to sell all the rest of the meat. But in the meantime, it’s all hanging in the locker. I called every local meat market in town. I called everyone from Miami to Tallahassee. I called Cheney Brothers, Sysco, US Foods… And they all laughed at me,” he offers with a shrug. “I didn’t know what I was doing, but I was trying. This was 2009 and I spent every day of the year trying.”

“I learned that meat doesn’t go bad, it ages,” he recalls. “And now I’m learning how to dry age a whole carcass. Most people just dry age cuts. I learned how to take care of the carcass in the locker.”

But even with time, Costa could not make kosher beef a profitable proposition.

“I flew everyone in again and we did another 10. Same thing happened,” he reveals. “I did that another four or five times.”

“So the rabbi suggested, ‘chemical free and grass fed.’ I said, ‘Are you kidding?’ The grass-fed stuff I’d eaten was tough, chewy and metallic. It was horrible. He says you just haven’t had the right beef. So it was either shut it down or find another way,” he admits. “Because I was stockpiling tons of meat.

Costa began researching the topic, and met the owner of a 600-acre farm called the Four Arrows in 2009.

“She had 200 head of Aberdeen Angus roaming around—big, beautiful, lazy, fat cattle,” Costa says with a laugh. “No hormones, no antibiotics, no pesticides, no herbicides, no grain. She had them in rotating

He learned that the key to quality grass-fed meat is quality grass. Using just Bahia and Coastal is not going to produce a good result. When he tried to buy some of her cattle, she too laughed.

“She said, you either take it all or you get none,” he recalls. “So I put the kosher business on the shelf. I realized I needed to learn grass fed, pasture raised and chemical free. And I applied everything I that learned that first year to grass fed, how to keep my kosher meat from rotting by hanging for up to 28 days. Now it was my standard operating procedure.” 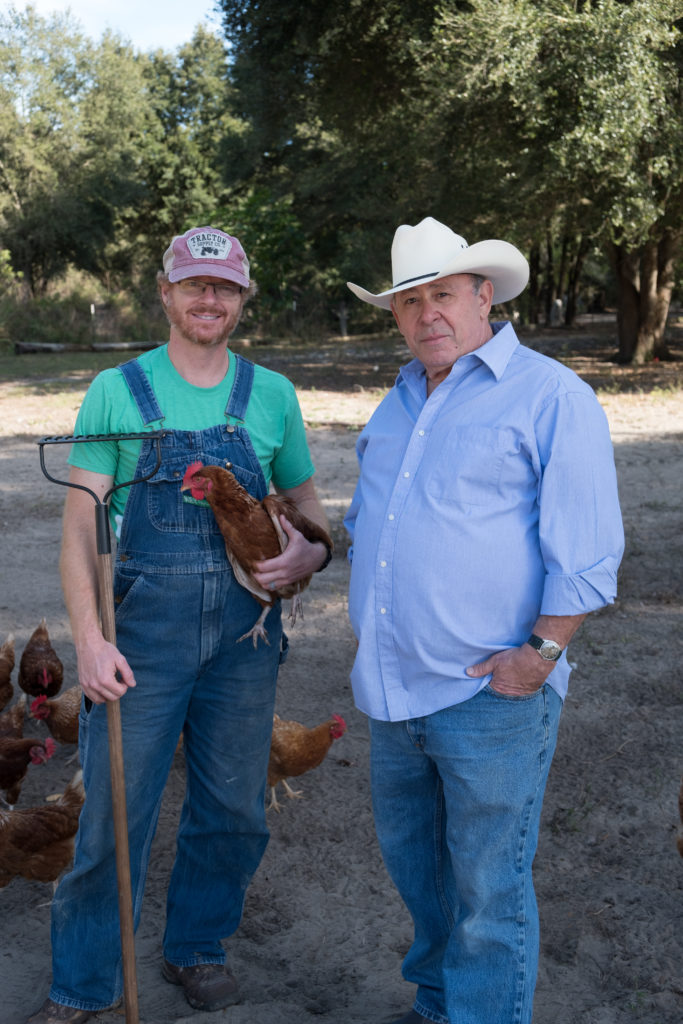 Costa knew that with a non-traditional product, going the traditional route for sales wouldn’t work.

“Instead, I thought, farmer’s markets,” he offers. “In January of 2010, I did the Ocala market and the Haile Plantation market in Gainesville. I had a pickup truck, a freezer, a step stool and a folding table. I got a George Foreman Grill, cooked up a pound of ground beef without any seasoning, cut it into squares and offered a taste on a toothpick. I still wake up every Saturday morning at 5 o’clock and do Haile Market. And they’re there, five, six, seven deep—people who have not bought meat anywhere else in the past 11 years.”

His team operates at seven other markets from the Tampa area to south Florida.

“I ship all over the state,” Costa asserts. “We do a lot of shipping. And we’re getting ready to put together a major online shopping program.”

Over time, he has enlarged his network of farms and added pork, lamb, goat, chicken, duck, turkey, quail, alligator and rabbit, and eggs.

“It was a slow start, but it was a deliberate start that gave me the foundation I needed to build an actual, viable, sustainable meat company,” he asserts. “Very few people have done what I’ve done. I got in when people thought it was just gonna be a fad. Now, I’m up against the big guys. I’ve grown and I’ve gotten smarter.”

And it’s not just the public that thinks so.

“Chefs started telling me, ‘This is great. Can you start supplying me?’ So I’ve got guys like Dimitri at Feta, all that meat on his menu. Pi On Broadway, the burger on Pi’s menu is mine. Loring Felix, who just opened the Fiery Chef, he uses my stuff.”

Chef Randal White at Mark’s Prime Steakhouse is also a fan and gave a shout out to Costa’s quail, lamb and chicken when we spoke to him about where to find the best ingredients in our area.

The Florida Fresh Meat Company website has a section that lists which restaurants and markets carry his products.

And those farmers who laughed at Costa when he was trying to get started?

With more than a decade of success behind him, he is now ready to take his original dream back off the shelf.

“Ten years later, we’re going to start the kosher program again,” he reveals. “Nobody is doing clean, chemical, hormone and antibiotic-free glatt kosher meat in the state of Florida. But I’m going to,” he continues, smiling proudly. “Look, I realized it takes more than just raising cattle to make great meat. There’s a difference. But I’m not giving away any more of my secrets.”

For the last few years, the baked goods offered by...

A tiny kitten gets help from a “village” of good...

Seeing Peacocks Through My Eyes Brick City Center for the...

An enterprising family with deep roots in the community is...

“I have been interested in baking since I was a...
Ocala Style Homepage Features Promotional Features Departments