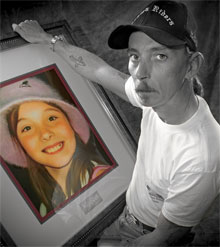 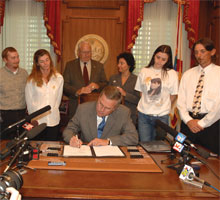 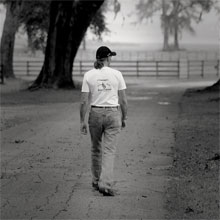 There are moments, big and small, that change our lives.

Then there are immeasurable moments that change who we are. For Mark Lunsford, that moment came on the morning of February 24, 2005, when he discovered his 9-year-old daughter Jessie wasn’t in her bed.

“We had watched the TV show Lost together the night before, then I had gone out with my girlfriend,” remembers Lunsford. A single father, he and Jessie had moved to Homosassa to live with his parents only a year before. “As I unlocked the back door the next morning at 5:30, I could hear Jessie’s alarm clock going off. She always liked to get up early and get ready for school.”

Having no reason for concern, Lunsford took a shower and got ready for his job as a truck driver. He thought it was odd that the alarm was still beeping when he came out of the bathroom. That’s when he checked on Jessie. That’s when he saw the empty room, the empty bed.

Lunsford woke his parents. Quick search around the house, calling her name. Doing the same outside. But Lunsford knew something awful had happened. Jessie wasn’t the kind of child to play hide and seek, to run away. Lunsford knew in his head what his heart could not bear. Someone had taken his daughter.

“The first thing the detective did was sit me down and ask me if I had anything to do with my daughter being missing,” says Lunsford, a darkness settling into his hazel eyes as he remembers. “It was all I could do not to hit him. I let him know that, too.”

But the questions, the suspicions did not end there. Lunsford would spend the next three days at the Citrus County Sheriff’s Office being interrogated while authorities searched for his missing daughter. His father, Archie, and his mother, Ruth, were also questioned relentlessly; all three family members were given polygraphs by the FBI.

“It was hell,” says Lunsford, looking away for a moment. “For those three days, I could hear Jessie crying for me to come and get her. All I wanted to do was find my daughter and I couldn’t.”

On the fourth day, after passing the polygraph test, Lunsford knew it was too late. He didn’t hear Jessie’s voice anymore. There was only silence. It would linger for three weeks.

On March 18, Lunsford was being interviewed by the media in his parents’ driveway. He watched as the police drove up to the mobile home across the street and began putting up yellow crime scene tape around the property.

Trying to hold his breaking heart together, he went inside and told his parents that the end was near. Jessie had been found.

In the early morning hours of March 19, Jessie’s body was found buried in a garbage bag. With her was the small, stuffed purple dolphin her father had won for her at the state fair the weekend before she disappeared. Cause of death was ruled as suffocation.

An anonymous tip had led police to John Evander Couey, a registered sex offender who had been living with his half-sister and her roommates in the mobile home across the street from the Lunsfords. The police had spoken to the people who lived in the mobile home briefly during the first days of the search. But at the time, they weren’t aware that Couey, who stayed in his bedroom, was living there. Couey had fallen through the proverbial cracks in the system. When they came back to question him weeks later, he was gone. Another tip said family members had bought Couey a bus ticket to Georgia. Now officially an absconder, a sex offender who doesn’t notify authorities of leaving the state, Couey was arrested in Augusta, Georgia.

On March 18, he confessed to kidnapping and murdering Jessica Marie Lunsford. He told the police how he broke into the Lunsford home and snatched Jessie from her bed while her grandparents slept. Told them that she was alive, hidden in a closet when they first came to the mobile home during the initial search. Couey said she was alive for three days — for three days Lunsford had heard his daughter crying for him — before he buried her alive behind the mobile home, not a hundred yards from the Lunsford home.

With his trial still pending, Couey has pleaded not guilty to charges of first-degree murder, sexual battery on a child under 12, kidnapping, and burglary without battery. His confession may be tossed because at one point he reportedly asked for an attorney and didn’t receive one until much later.

At 42, Mark Lunsford is not a large man. But he is fit, possessing a wiry toughness that would make you want him on your side in a bar fight. Then there are the tattoos — several up and down both arms, one on the middle finger of his right hand, and two on his torso. Some he got during his three years in the Army, others as tokens of love to loves now long gone. His latest is the large one of Jessie in her favorite pink floppy hat on the bottom right side of his torso.

Lunsford’s formal education ended after ninth grade, followed by the education of the Army and life. It may not have always been easy, but it was a good life of working hard, riding his motorcycles, and raising his children: Gerald and Elizabeth, 21 and 19 respectively now, followed by Jessie.

Lunsford will look you straight in the eye and tell you who he was before Jessie was taken from him. He’s just not sure who he is now.

“I was a single parent,” says Lunsford. “I worked hard to raise my kids. Once the older two were on their own, I figured I had learned a lot about raising kids by the time Jessie came along. She was special from the start and I think she took care of me more than I took care of her. We were best friends.”

That was then. But things are different now for Lunsford. He is different.

Transformed by unimaginable grief, Lunsford has gone from a truck driver and single parent to an advocate for everyone’s children. He has been thrust into the world of politics, lobbying, legislative acts, TV and radio talk shows, newspaper and magazine interviews. It is a world as foreign to him as one without Jessie in it.

When necessary, his slightly rough-around-the edges look — blue jeans, T-shirt, and trademark baseball cap — has given way to a sport coat, crisp dress shirts, and even a tuxedo on occasion. Lunsford has been on Oprah, The Bill O’Reilly Show, Court TV, and Catherine Crier Live. He has been to Tallahassee, New York City, Chicago, and Washington, D.C. He has testified before the U.S. Congress, as well as many state legislatures in New Jersey, New York, Kentucky, Pennsylvania, Utah, and South Carolina. The message has been the same — sexual predators have to be stopped.

Legions of people have stepped forward to help Lunsford with his mission. Among those is Terri Jones-Thayer, owner/developer of Jumbolair Aviation Estates in Ocala who offered her support. “Once I met Mark,” says Thayer, “I knew I had to become involved in his mission.”

Thayer put Lunsford in contact with Jude Hagin of the Ocala Film Commission. Hagin was instrumental in lining up the Oprah appearance for Lunsford and accompanied him to Chicago. She is also working with Lunsford on a future documentary, a TV show patterned after John Walsh’s America’s Most Wanted, and a possible TV movie of the week.

“It may seem as though being involved in Mark’s mission is outside the scope of the film commission, but it really isn’t,” says Hagin. “The mayor and the city council agreed with me that it was important work. If our children aren’t safe, film production doesn’t matter much.”

Lunsford doesn’t relish the spotlight, but for Jessie’s sake, he’s accepted it.

“I couldn’t save my little girl,” he says. “But my mission now is to change the laws so we can save other children. At the press conference after Jessie was found, I challenged the politicians to step up and not allow this to happen to another child.”

Senators Tom Lee and Nancy Argenziano and Representative Charles Dean were quick to accept the challenge, sponsoring the legislation through the State Legislature.

On April 19, 2005, the Jessica Lunsford Act was unanimously passed in the Florida Legislature. Governor Jeb Bush, with Lunsford on hand, signed it into law on May 2. The law provides for a mandatory sentence of 25 years to life for the molestation of a child under 12, the death penalty in capital cases for sexual predators who murder their victims, probation or community control and a system of active electronic monitoring for the remainder of the sex offender’s natural life. The law also includes it being a third-degree felony for failure to re-register as a sex offender, as well as assisting and/or harboring a sex offender.

Overall, Lunsford is pleased with the new law and grateful to those who made it possible so quickly. But he is vocal about a few points he finds exception with.

“I would’ve preferred just the death penalty without the possibility of a life sentence,” he says. “And I prefer the term ‘sexual predator” instead of ‘sex offender.’ These people are predators and their prey is children.”

Lunsford’s anger and his grief lie there just beneath the surface like a coiled snake. Poke it with a wrong word and it raises its head, ready to strike. Predator is one of the sticks that stir the snake. When his anger gets the best of him, though, Lunsford says he hears Jessie, “Be nice, Daddy. Be nice.”

“She’s the one who’s guiding me through this,” Lunsford admits. “I’d be lost without her. Everything I’m doing now, I’m doing for Jessie.”