It takes a village of loving adults—from foster parents to agencies such as Kids Central—to build better lives for foster children.

Amy and Jeff Hill have a beautiful family. Their six adopted children, who range in age from 2 to 8 years old, are happy, smiling kids who love to run and play outside. The two they call their “twins,” McKinley and Gracelyn, both 2, like bubbles and lollipops. Their four older siblings, 8-year-old Parker, 8-year-old Allie, 6-year-old Savannah and 4-year-old Bentley, enjoy playing soccer.

All six children’s lives would be very different today if they hadn’t come into the Hill’s home as foster children.

For the Love of the Child
Why would a young couple, married for four years, go from no kids to six kids within a matter of months? For the Hills, it was a simple decision, Jeff reveals.

“There’s a huge need for good families,” he says. “There are a lot of kids who don’t have homes right now.”

The whole point of foster care,” Jeff explains, “is to give a child a safe place. Love. A home. To know that they’re safe. Some kids never, ever have that. It’s sad. If they’re with us for a short period of time and they know having that family feel, having their own bed to sleep in, having every meal, that’s what it’s all about. Whether they’re with us for three days or two years, as long as they have that and know what it felt like at one point in our life, we’ve done our job.”

“It’s because of them that these kids have the best shot at life,” she says of families like the Hills. They wouldn’t be where they are without somebody like Amy and Jeff “stepping into that gap for them.”

Gilbert and the Hills hear a lot of people say they couldn’t be a foster parent because they’re scared to get too attached to a child who may later leave their care to go back to live with, typically, a biological parent or family member. But, they all agree, that’s just part of the process.

“It’s loving that child and being willing to say it’s time for me to love you from afar and still be there for you,” Gilbert explains.

Amy and Jeff agree. They are now thrilled to be the godparents of a boy who lived with them as their foster son for a year and a half but was eventually adopted by another family. All six of their adopted children gained a bonus “grandma” in one child’s biological grandmother, who, Amy says, “considers all of our kids her grandkids and is still very much in our life.”

An Ocala native, Amy says her own parents and Jeff’s family also have been a huge support system for them.

“Our parents help out a lot,” she notes. “They were welcoming, too, as far as treating them like grandkids from the beginning.”

It Takes a Village
There are more than 1,600 children across the five-county area Kids Central serves who have experienced the trauma of abuse or neglect and have been removed from the home of their parents or caregivers. Those children need a safe place to live, sometimes for just one night and sometimes for a lifetime.

The goal, Gilbert says, is always to reunite a child with his or her parent, if possible.

“They need someone who can step in the gap until mom and dad can work their case plan,” she says, explaining that when a child is removed from their parents’ home, Kids Central begins working with the parents on a plan to ultimately result in reunifying them with their child—including helping parents learn better parenting techniques and finding community resources. Sometimes, she says, a family may need “wraparound services,” which could include identifying monetary resources to help them get back on their feet or home visits to offer support.

In many cases, Gilbert points out, a child no longer living with their parents may be placed in kinship care, or the home of a biological relative.

“Those are our grandparents, aunts and uncles raising relative children,” she says. “Kids Central has one of the best kinship programs in the nation. We provide a ton of resources for those people who are raising their relative children—from financial support to support groups where they can talk about it so they don’t feel alone.”

Along the way to their permanent home, whether that ends up being their own biological parents, another family member, or an adoptive family, the reality is many children stay in a foster home, whether for one night, a few weeks or a few months.

Amy and Jeff have had around 50 children stay in their home over the past four years. They recall a midnight phone call asking them to help an infant who needed a safe place to sleep just for the night. There were many boys and girls, from newborns to 17-year-olds, who found a safe haven with them for a few days, a few weeks or a few months.

“We had one little boy who came into our care with a domestic violence case,” Amy remembers. “We kept him just long enough for his mom to get to a safe place away from the father, who was abusive. And then he went right back home with her.”

As she points out, there is never a lack of children who need a safe place to live, and every foster child who is reunited with their birth family opens up a place in a foster home for another child who needs care.

“It’s hard, but there’s never been a point where I can’t say it wasn’t worth it,” Amy offers. “I can’t imagine what we would have missed out on if we didn’t do this.” 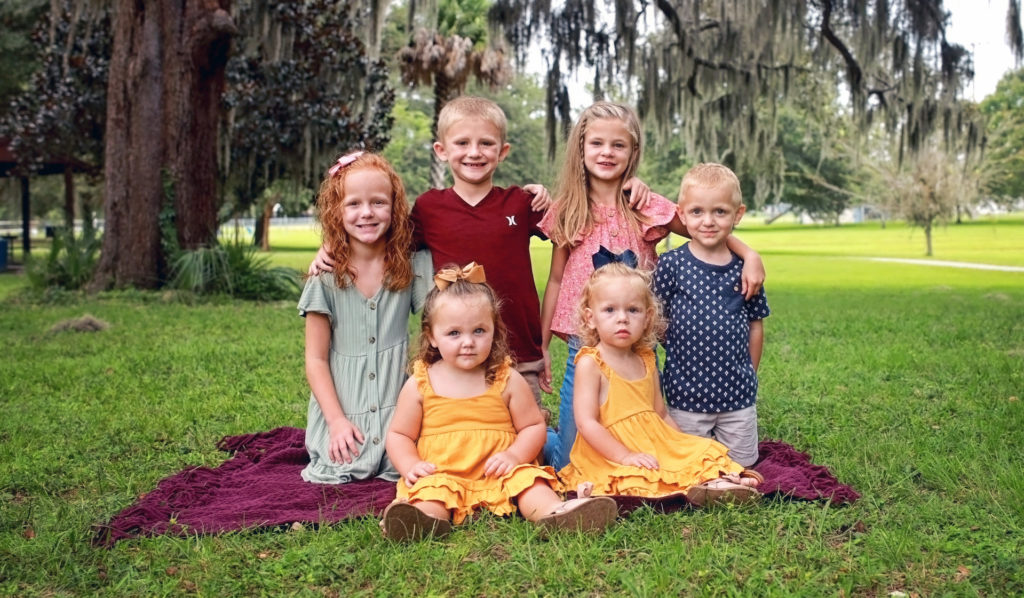 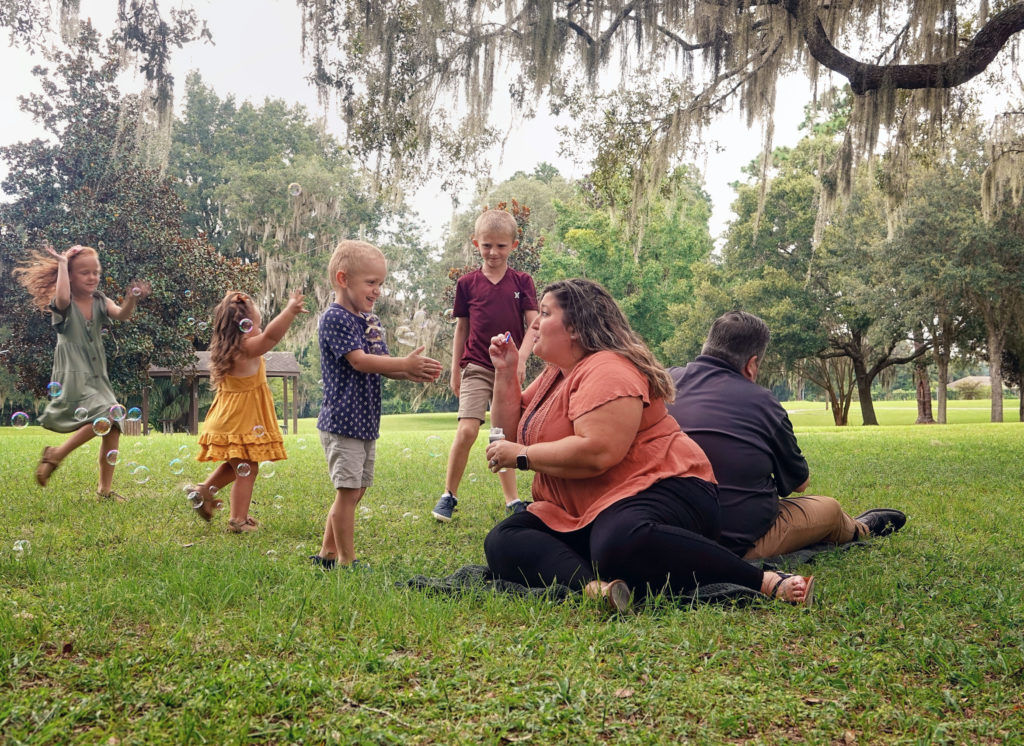 By the Numbers
From June 2020 to June 2021 in Marion, Citrus, Hernando, Lake and Sumter counties, Kids Central assisted with 307 kids who were adopted and 239 children who were reunited with their families. They also licensed 70 foster homes.

Myths About Foster Parenting and Adoption
Foster and adoptive parents do not have to be a married, heterosexual couple. Approved homes may be a single dad, a single mom, a non-married couple who lives together or a same-sex couple.

Foster and adoptive parents don’t need to be wealthy. Foster homes receive a monthly stipend to assist with expenses. Foster children have health insurance coverage through the state. Foster Florida helps families who need financial support and resources including childcare. There are no adoption fees for adopting children through Kids Central. Every child adopted out of the foster care system receives a college education paid for by the state.

Foster and adoptive parents are not on their own—they have a broad support system. Kids Central partners with local organizations including Kimberly’s Center for Child Protection and the Pearl Project, which provide services to children who have had to deal with trauma or abuse. Kids Central provides free training and a foster club for foster youth and parents, and adoption services staff offer support services for the family until the child turns 18. Foster Florida connects foster families to one another. Amy Hill volunteers with the Ocala chapter.

Teenagers want and need to be adopted as much as younger children. As Gilbert points out, “A lot of kids just want a family to come home to for the holidays. They want to have a mom or dad they can call. Everybody wants somewhere to come home to for Thanksgiving or Christmas.”

Other Ways to Help
Donate Kids Central is a 501(c)(3) nonprofit organization and accepts both monetary and in-kind donations. New items always needed include dishes, silverware and plasticware; baby items such as diapers, wipes, shampoo and lotion; hygiene products for older children including deodorant, shampoo, conditioner, body wash and feminine products; and underwear and socks in men’s and boys’ sizes.

Spread the Word Follow Kids Central on Facebook and Instagram. Help raise awareness by liking or sharing posts that let our community know about the need for foster and adoptive families.