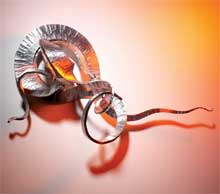 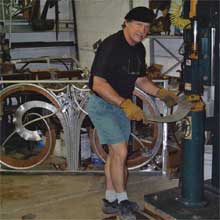 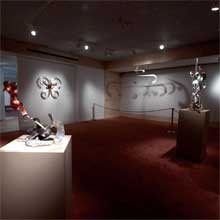 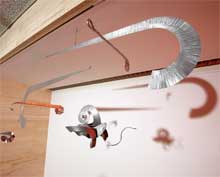 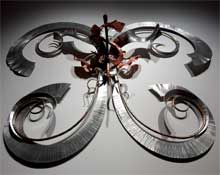 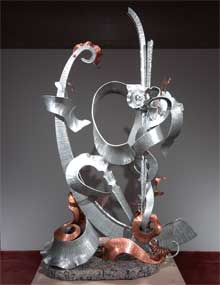 Bill Roberts’ fear of heights that led him into ornamental metalwork — in a roundabout way, that is.

He had purposely taken a job working on communication towers to get over his fear of heights, forcing himself to spend his days 400 to 500 feet above the earth, when he realized he wanted something else — something besides just getting his feet back on the ground.

“I was making good money,” he says, “but there was something about it that just wasn’t satisfying.”

Bill Roberts wanted to live his dream. Only, he wasn’t sure what that was. The answer changed the course of Roberts’ life.

He remembered some work he had done in years past with a jeweler and how much being creative meant to him. He found a jeweler that needed help and went to work.

“I ended up doing some scrimshaw, etchings in ivory,” he says, “scratching out little palm trees and swordfish and Florida-themed items in ivory stones called cabochons.”

Once the etchings were complete, Roberts would fill them in with ink, causing the picture to emerge.

Not too long after, he realized he finally had an answer — what would make him truly happy was the freedom to be creative by designing pieces of jewelry.

Roberts ventured out on his own, opening his own jewelry business in 1984. At one point, he presented some of his scrimshaw to jeweler Guy Lemieux, hoping that Lemieux would be able to set his pieces of ivory in gold. Lemieux believed Roberts could set the pieces himself and suggested a resolution. After a visit to Lemieux’s house, Roberts ended up purchasing some equipment that exposed him to the ancient art of lost wax casting. Through this process, Roberts would be able to set his own pieces in gold.

“I went to the library and got a little book on lost wax casting and found out just how easy it was and was very intrigued,” Roberts says. “I had no idea what I was getting myself into.”

In lost wax casting, a hard wax pattern is made and then molds of the pattern are created using rubber or silicon. Once a rubber mold of a pattern is made, hot wax is injected, allowing the artist to make multiples of any pattern.

Roberts makes most of his patterns in wax, he says. He explains that it’s usually a hard wax because it can retain more detail. After the wax pattern has been carved, it’s incased in plaster (called investment). Then the flask with the plaster investment and wax is put in a kiln and fired. Once the wax has melted away, what’s left is a perfect negative of the pattern, which can then be cast in any metal. It’s a one-time casting because the plaster investment is lost in the process. Through this process, Roberts finally got the incredible detail he desired.

Creating jewelry made Roberts very proud. He says he became so “on fire” about this new venture that he couldn’t wait to go to bed at night so that he could get up the next morning and continue work.

“From that day on, I haven’t worked a day since,” he says. “I’ve always heard that when you blur the line between work and play, you’ll never work another day. That’s so true.”

Doing what he loves has kind of spoiled him, he says, because he could do other work and make more money, but he couldn’t imagine doing anything else.

“I had been doing jewelry work for about five years and a friend got a call from some gentlemen in town, Alex and Jack Klahm. They were making a chandelier for the Adventurer’s Club at Pleasure Island. That was my introduction to large-scale metalwork.”

Shortly thereafter, Roberts started working for Klahm and Sons, Inc., and they rest, as they say, is history.

“It’s amazing how things kept happening and doors kept opening for me,” Roberts says. “This just kept getting bigger and better.”

Roberts explains that at Klahm and Sons, Inc., the seed was planted that motivated him to learn the forging and fabrication approach to metalwork. That experience allowed him to broaden his artistic horizons to include not only fine jewelry in gold and sterling silver, but also to create “house jewelry.” What he means is that he creates bobbles for the home, such as entry gates, intricate metal railings, doors, lighting, furniture, and sculpture. His designs include aluminum, steel, brass, bronze, and copper.

The majority of Robert’s work, which has an architectural feel, he says, is functional art. Many of his clients request gates, railings and doors, which Roberts turns into elaborate pieces of art. Each of the pieces has a function to fulfill, but if he’s lucky, he says, it can become very ornate and make an artistic statement.

After many years spent perfecting the processes of lost wax casting and hot metal forging, Roberts decided to try a new approach — cold forging, a process of forging that has been around for years. Through this process, instead of using heat to soften the metal into a workable medium, pieces of metal are pounded while they are at room temperature. Cold forging allows the metal to develop into organic shapes as it stretches and bends naturally.

“I had always been taught that metal had to be forged hot,” Roberts explains.

All that changed for Roberts mid-August two years ago when he decided it was just too hot to work with the 2,600-degree gas forge he uses in his shop.

“I was just frustrated because I wanted to forge something,” he says, “so I went out into my shop and got scraps of sterling silver from my jewelry bins and thought I’d forge them until they split.”

He thought he was just going to “play around” for a while. Fortunately, these scraps of sterling silver didn’t split and what Roberts uncovered was the cold forging process. He discovered that the metal would stretch and bend into beautiful shapes. He ran out of sterling silver scraps and moved onto triangular shaped aluminum pieces. Before he knew it, he had used every bit of scrap he had in his shop.

This is the process he has been using ever since. He uses a homemade air hammer to texture the metal first, and then he begins forging on one side, using nice, even hammer blows. The metal bends and stretches naturally into a free-flowing shape with even lines. Once Roberts has several pieces like this, he fits them together, making sculptures and metal mobiles, which after being strung together, hang from the ceiling. For Roberts, the pieces of art grow like leaves and plants grow — that is, organically and naturally. Anything made with this process, he says, will go together.

Roberts’ ability to draw and create these unique pieces of jewelry, sculpture, and “functional” pieces of art, as Roberts says, makes him an artist to many people.

“I have always felt unworthy of the title ‘artist,’ but I had to realize that art, like beauty, is in the eye of the beholder,” he says. “If someone thinks what I do is art, I need to believe that. Not only have I come to the realization that I am an artist, but it’s what fulfills me. I couldn’t do anything else.”

Dr. Leslie Hammond, Chief Curator of the Appleton Museum, certainly believes Roberts’ unique process and natural artistic ability makes him an artist in every sense of the word.

“His process of manipulating metal into plasticity mimics the growth and movement of the natural world with a substance that is anything but fluid,” she says. “The final compositions themselves flow, resembling ribbons in the breeze whirling in and out and back around again. The skill of any artist is to create something that does not appear to be the sum of its parts. Roberts’ proficiency as a metalsmith reveals organic forms that can hardly be fathomed to materialize from metal.”

Roberts work can be appreciated at the Marion County Public Library at 2720 E. Silver Springs Blvd., which houses several of his original sculptures that were created using aluminum, copper, and the cold forging process.