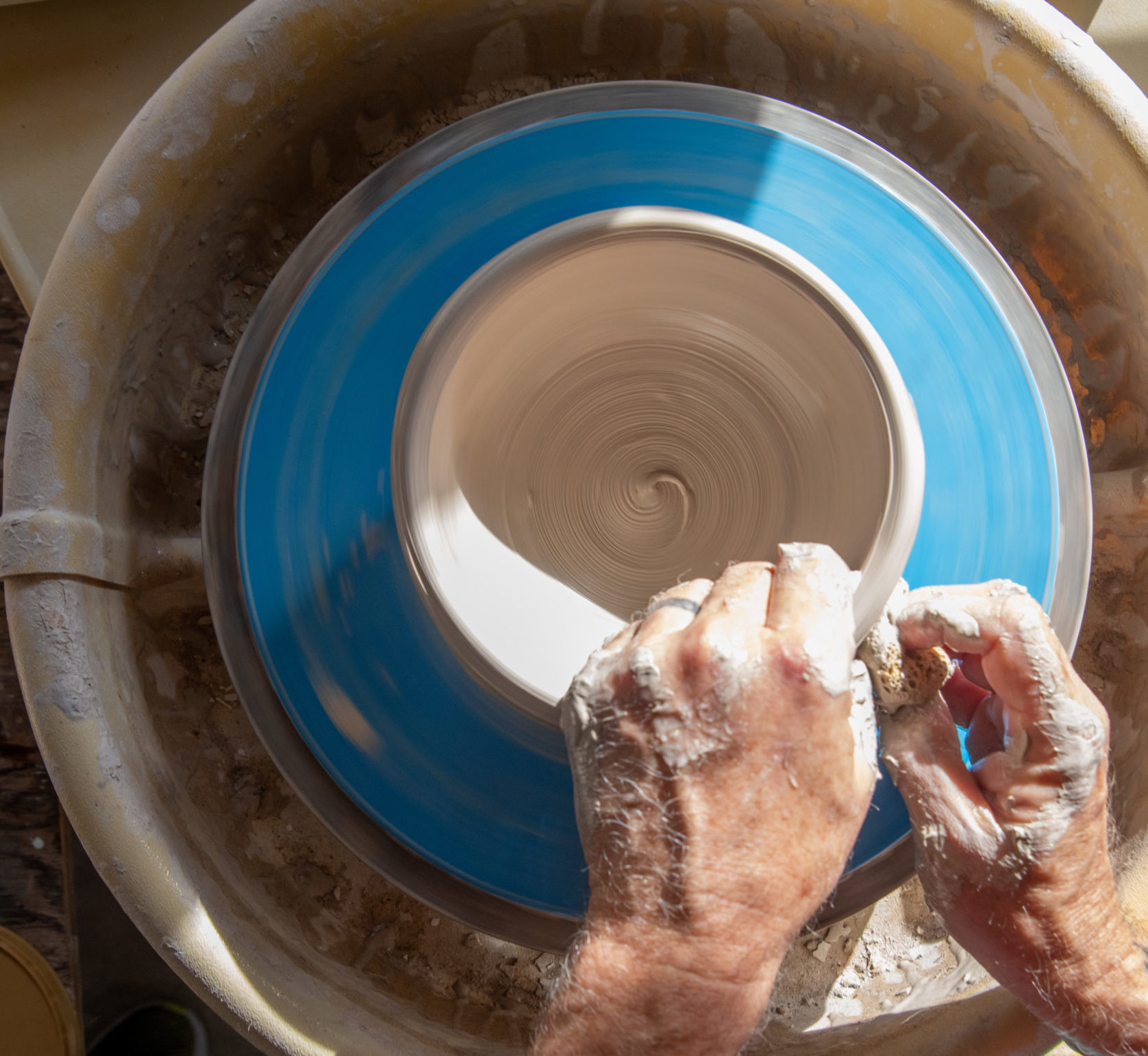 Over four decades, Gene Hotaling created a multimedia art career and served as an art educator. While retired from teaching, he has most certainly not retired from creating, currently focusing mainly on functional ceramics.

Sitting at his treadle pottery wheel in his Dark Corners Studio, sunlight spilling in from the small open window and Bob Dylan music playing in the background, Gene Hotaling is in his zone. He’s doing what he loves to do and does well—creating. What only moments ago was a lump of clay is spun, cajoled and shaped by Hotaling’s hands into the beginnings of a high-fire stoneware bowl. Once he is satisfied with his creation, he carefully places it on a nearby table with other pieces to dry.

“Ceramics is always a battle between too wet or too dry,” explains Hotaling, 65, a soft-spoken man with a white beard. “But it is a challenge I enjoy facing every day. I love being in my studio.” And Santa’s workshop has nothing on Hotaling’s whimsical 1,800-square-foot studio, which was originally a garage that housed antique cars. When he and his wife, Helene, who teaches at Madison Street Academy, bought their current residence in 1991, that garage was a big selling point. “The minute I walked into the garage, I envisioned my studio,” says Hotaling with a wave of his hand. “Over the years, I built walls to create different spaces and it developed into what it is today.”

The largest open space has tables and freestanding and wall shelves filled with tools, bins of materials and paint brushes. Works-in-progress, such as clay bowls, mugs, pitchers, cookie jars and vases, sit in various stages of drying, waiting to be fired and then glazed. On a table is one of Hotaling’s in-progress sculptures, which are assembled by bringing together various multi-media elements to tell a story or deliver a message. One features a small Statue of Liberty trapped in wire caging, depicting endangered freedom for all. Hotaling opens a door, flipping on the light switch to reveal an interior room that houses an art gallery of wall-to-wall shelves and a center table displaying beautiful high-fire stoneware. Trees and bamboo are the dominant subject of the artwork adorning the stoneware rendered in mostly earth tones. But there are other patterns and lighter colors that bring to mind ancient Grecian stoneware, the latter perhaps a nod to his being born in Greece.

“All of my stoneware is one of a kind and I make things that are utilitarian. What I make is driven by what sells, but that changes on a regular basis, so then I go off on a different direction,” notes Hotaling, picking up a cookie jar then a double toothbrush holder. 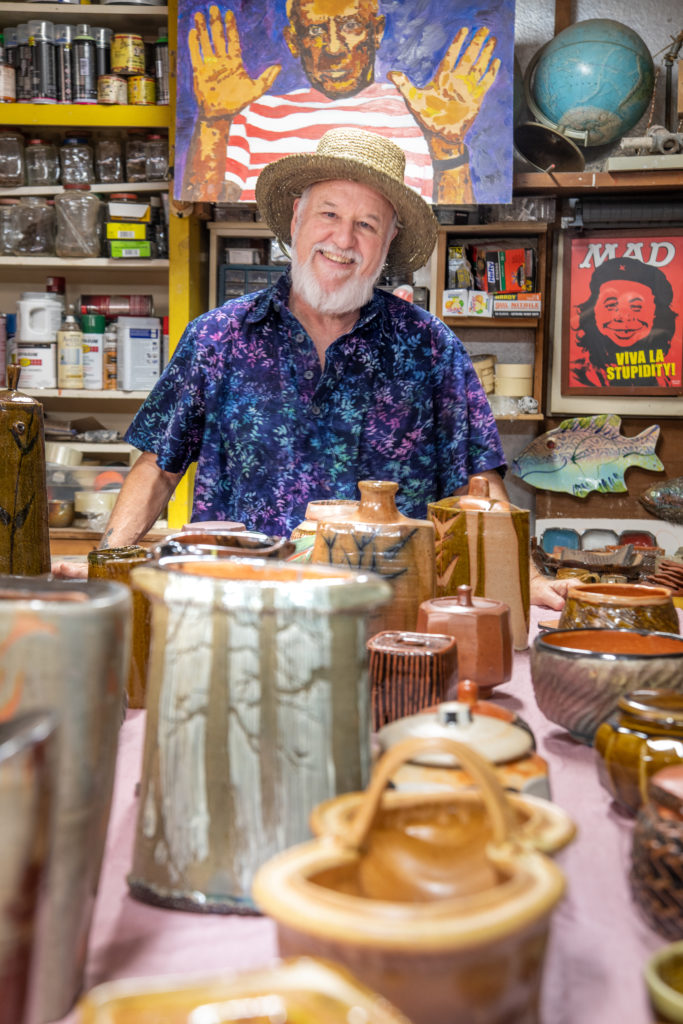 “People are buying a piece of art they can use. My most consistent biggest sellers are my mugs and bowls.” Some of his topselling mugs are a departure from the nature theme and feature carved 3-D faces of Einstein and Frankenstein.

“I love to sketch and used to paint portraits,” he explains, “so I had a little fun coming up with the idea of the Einstein and Frankenstein mugs.”

Interspersed among the functional stoneware in the gallery are Hotaling’s unique potsai stoneware sculptures. An avid bonsai gardener, his potsai sculptures feature what makes one think of mutant bonsai that have exploded from the ground and through their pots. “The potsai sculptures are just another fun thing to make,” says Hotaling, who is in his studio every day by 9:30am and works for several hours. “I like to make things that are different. Although, because of the regular irregularities of the clay and glazes, it’s impossible to make anything the same. And that’s what makes what I do so interesting every day.” 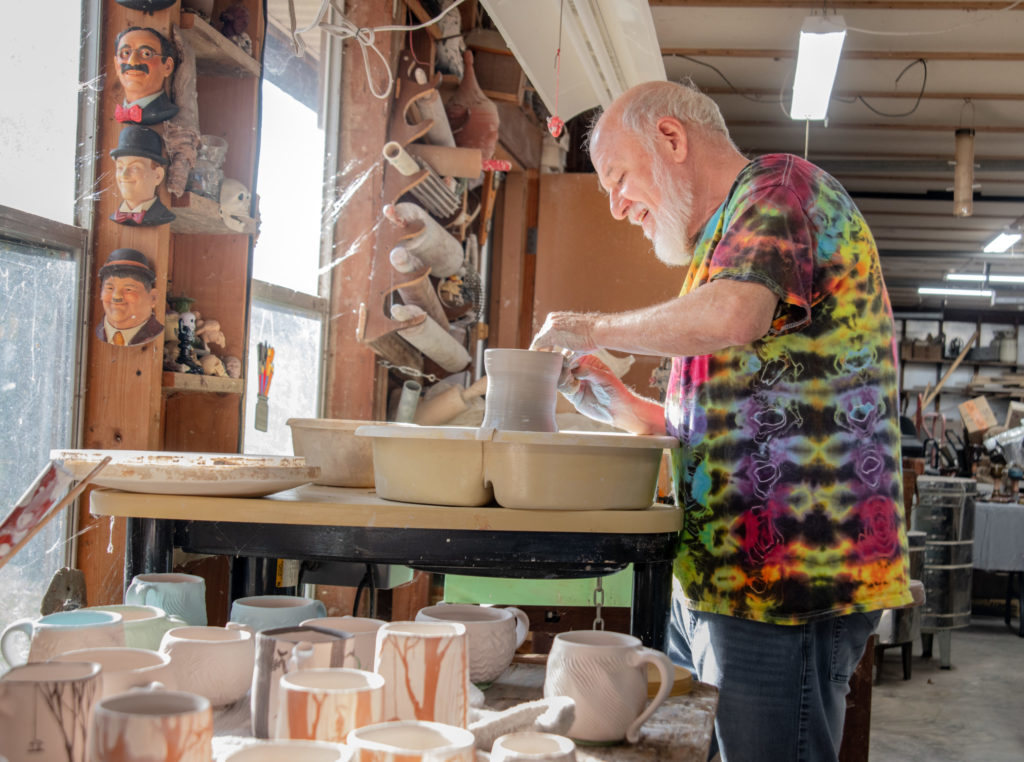 Hotaling’s father was an engineer for General Electric (GE). His mother, Kathryn, described as a crafter by Hotaling, died when he was 7. That was the extent of any artistic influence in his early life. “I remember drawing primitive sketches of trees with a ballpoint pen when I was very young. But I don’t know why I started drawing,” he says with a shrug. “After my mother died, my father and I moved to Daytona Beach, where he continued working for GE. As far as my art, it was not encouraged and I didn’t take any art classes in middle or high school.”

Instead, at 16, Hotaling attended Stetson University as an advanced student. It was then that he took 3-D design classes and his first ceramics class. “I became instantly fascinated with the potter’s wheel and the art of creating on it. I knew right away that this was my creative path,” admits Hotaling, who graduated with a bachelor’s in English, history and art in 1979. “I then went to the University of Georgia (Athens) and began doing graduate work in ceramic sculpture. But after Helene and I had our first child, we were quickly expecting another. So, I had to leave the university and go to work.”

What followed was a seven-year stint as an assistant advertising manager for the Georgiabased Stone Mountain Memorial Association. During this time, Hotaling also founded The Artrepreneur, a freelance art and design agency.

“In 1990, Helene and I decided to move to Ocala to take care of our aging parents. And, in 1991, we bought our house with the garage that became my Dark Corners Studio,” he says. “I couldn’t have asked for a better studio space.”

In 1991, Hotaling also went back to college to obtain that elusive master’s degree, this time at the University of Florida (UF). He graduated with a master’s in fine art ceramics in 1994. It was while working on his master’s at UF that he began teaching as a graduate assistant. “I found that I really enjoyed teaching and found it to be every bit as creative as any other form of art,” he explains. “A good art educator must impart technical skill and technique, but more importantly, create an environment in which students feel free to create and experiment. And I would always remind my students that we are both teachers and students simultaneously.”

In addition to teaching, Hotaling designed and customized six equine statues for the Horse Fever public art project and illustrated a series of UF Gator children’s books written by Mark Damohn. “I did truly love teaching while always continuing to do my artwork,” admits Hotaling, who was named a 2002 Fulbright Memorial Scholar and participated in a five-week educator exchange program in Japan. “But by 2018, I felt it was time to retire from teaching to spend more time on my artwork and with my family, especially with our grandchildren. And it is a joy to be able to get up in the morning and head to my studio.” 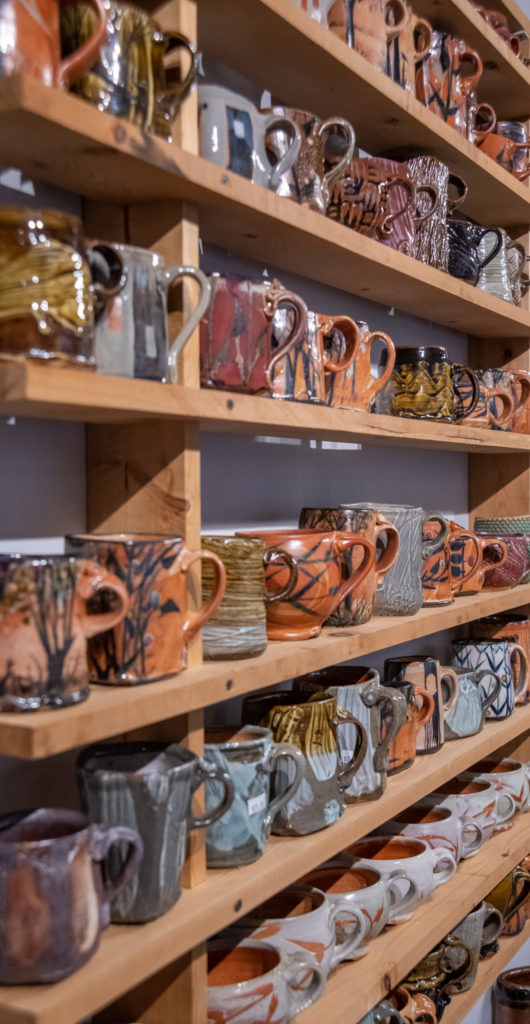 FOCUS ON THE ARTWORK

Remember that bowl Hotaling molded on the potter’s wheel and then set aside to dry? Once the bowl is dry to his satisfaction, next will come the first firing (known as the bisque) at 1800 degrees Fahrenheit in a kiln.

A kiln is an oven for firing pottery and the most common types are electric, gas and wood. Hotaling has four electric kilns, four small propane gas kilns and a large brick gas kiln. Worth noting is that he built all of his kilns.

“The bisque firing helps create a solid wall for the glazing process,” he says. “My small electric kiln takes about 10 to 12 hours to fire and 12 hours to cool pieces.”

Once cooled, the bowl will be glazed by a method of spraying, pouring or brushing. And it should come as no surprise that Hotaling mixes his own glazes. On studio shelves are bags of glaze ingredients such as silica, bone ash, borax, felt spar, dolomite and Epsom salt. He pulls out a small, wooden recipe box, revealing dozens of cards with handwritten recipes for specific glazes.

After being glazed, the bowl will go through high firing at 2300 degrees Fahrenheit in Hotaling’s large brick gas kiln. This “high firing” can last 12 to14 hours, followed by a cool-down period of 36 hours to prevent cracks and glaze defects.

“Of course, I fire a lot of pieces together to speed the process along. I always make extra of certain pieces in case of breakage, natural attrition and flaws,” he explains. “People just don’t realize how many hours go into a piece of high-fire stoneware.”

Hotaling’s stoneware can be purchased by calling him at (352) 425-6386 to make an appointment or at the Juniper General Store in Ocala. The latter is co-owned by two husband and wife teams: Meredith Richard and Travis Arenburg, and Polly Benson and Dick Olsen. “Gene came highly recommended to us by a friend who was using his stoneware in her restaurant. So, we contacted Gene and went to his studio to see his stoneware. We bought his stoneware right away,” Richard recalls. “We’re primarily a coffee shop, so we sell a lot of coffee mugs. In fact, many of our regular customers are now collecting Gene’s coffee mugs. The Einstein and Frankenstein mugs have become best sellers.”

She adds, “We also sell Gene’s lovely little tea pots with matching cups and saki set too. His work is just excellent and, as a bonus, Gene is a wonderful man.”

Hotaling says he has no plans to retire from creating his functional art. “I have to do my art. Call it an inner necessity or a devotion. It is the avocation that propels me,” he shares. “I believe that the joyful pleasure of creating requires all of me. When engaged in creating, I find all of my human capacities present and usefully relevant to the task. Man creates art, art creates man.”