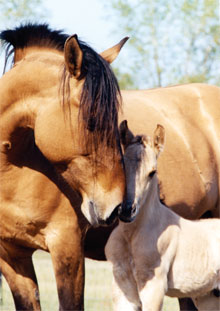 Few people have the privilege of looking ancient history in the face every day. Yet for Judy Yancey, that is exactly what she does each morning.

A longtime horsewoman, Judy is now breeding Kiger Mustangs, a relatively rare horse whose ancestry traces directly to the mounts brought to the New World by Spanish Conquistadors centuries ago.

Pronounced like “tiger” with a “k,” the Kiger Mustang was not even known to exist until the 1970s. With the passing of the Wild Free-Roaming Horse & Burro Act in 1971, designed to protect, manage, and control wild herds, the Bureau of Land Management (BLM) was required to round up and count all mustang herds in the United States.

In an incredibly remote and rugged area of southeastern Oregon, one herd of 27 horses was discovered in 1977. Remarkably, every horse in the herd was similar in color and conformation, strongly resembling the Spanish Mustang, once thought to be extinct in the wild. All horses were a shade of dun color and had primitive Spanish markings, including zebra striping on their legs and a dorsal stripe down the back.

Genetic testing at the University of Kentucky proved that these horses carried Spanish markers in their blood. This meant they were directly linked to the very horses ridden by the early Spanish explorers in the 1600s, and therefore, to the wild ancestors of those horses from Spain and Portugal. They were named Kiger Mustangs, after the Kiger Gorge region of the Steens Mountains in southeastern Oregon.

It is no accident that a Kiger Mustang was the prototype for the resourceful and majestic stallion in the popular animated movie, Spirit: Stallion of the Cimarron.

Judy first heard of these unusual horses in 1977, when a tiny article in a national horse publication mentioned their discovery by the BLM. She traveled to Oregon after one of the last Kiger gatherings.

“They hadn’t been turned back out yet, so there in the corrals was every Kiger from the wild. It gave me goose bumps to see them.”

Her goal with the Kiger Mustangs is to preserve, protect, and promote the breed. Call it a mission if you like — Judy certainly thinks of it that way. “To me, the Kiger is one of the few Mustangs with the closest link to the romantic past of the first horses that came to this country.

“Many people hear the word, ‘mustang,’ and think ‘wild,’ but that is not the case with this unique breed. They are extremely peaceful horses, wonderful to ride, and fun to be around. You teach them something one time and they’ve got it. They are so genetically consistent and they really reproduce true,” she adds. “You can depend on their gentle and exceedingly trainable nature. This is what my breeding program keeps in mind — not to mess up what Nature has created.”

On a recent visit to Clear Creek Farm, Judy proudly introduced me to her Kiger Mustangs. Although she has much to say about these noble horses, and understandably so, words aren’t necessary. Just being in the presence of these horses is enough to let any real horseperson realize what special animals they are. Less than 2,000 Kigers exist in the world, and I felt honored to have my hands on a few of them.

Their unique coloring and markings make them stand out from the equine crowd. In addition to the dorsal stripe down the back and the obvious zebra stripes (leg bars) on their forearms, there is a distinct dark cross over their withers (the base of the neck). Their sharply pointed ears are outlined in black and if you lift the thick forelock, there is a unique “cobwebbing” pattern of dark hair at its base.

As noted, Kigers are always a shade of dun. This includes golden dun, red dun, Grulla (a mousey gray), and claybank (or buttermilk — think of the color of Dale Evans’ horse). Blacks do exist, but are rare, and Judy has one.

Judy got her first Kigers in 1999. She brought home two mares, both in foal. Her foundation broodmare and excellent representation of the breed, Cherokee Spirit, is a lovely golden dun who rewarded her new owner with a colt. Judy named him Cherokee Twister, and this handsome horse is now a four-year-old and her trusted riding horse.

At nearly 16 hands, Twister is unusually tall for a Mustang, but has the stout, heavy muscling and appearance of the Kiger. “They make the ideal trail horse,” says Judy. “I was trailering Twister to the Forest to ride when he was just 2-1/2 years old.”

She now has 12 Kigers, including the striking young stallion Cherokee Warrior, a three-year-old who came off the range just last November. His gentle attitude and calm demeanor belie the fact that he was running wild less than a year ago. But take a close look in those remarkable dark eyes and you realize he has known places far away from fences, barns, and the touch of a human hand.

Judy has six Kiger mares for breeding and typically sells her young stock. She has sold nine Kigers to date, and two more yearling colts will enter training this fall and then be offered for sale.

At their training facility near Morriston, Fred Tuller and Roe Woodside have worked with several of Judy’s Kiger Mustangs. Roe has ridden since early childhood, and worked with many different breeds through the years.

“I’ve been around a lot of horses and they’re one of the smartest breeds I’ve trained,” she says. “Once they’ve learned something, it’s pretty solid. They’re just as easy as, or easier, to train than domesticated horses. They’re more aware of their surroundings than other horses, which comes from being in the wild.”

Fred and Roe use natural horsemanship methods in their training, at the heart of which is the concept that man is a predator and the horse is a prey animal. The trainer has to understand how the horse thinks in order to clearly communicate with the animal.

“They have a sense of self-preservation,” says Roe of the Mustangs. “You can’t be predator-like to them. If you’re aggressive and they feel threatened by you, it won’t work. I don’t think a beginner should just get a wild mustang and bring it home to train.”

Judy’s reputation as a breeder of quality has made it easy for her to sell horses through the years. She is interested in crossing some of her Kigers with Lusitano and Andalusian horses, both Spanish breeds that hark back to the original horses of the Conquistadors.

“I think the Kiger Mustang will continue to gain in popularity as more people get introduced to them,” she adds.

And with the BLM’s continued careful management and conscientious private breeders like Judy involved, the Kiger Mustang appears to be in safe hands.
“This is my artistic creation,” she explains. “I don’t play piano well and I don’t paint well, but you can see my artistic creation in the horses I produce.”

Eye of the Kiger

Judy Yancey is pleased to share her passion for her horses. To learn more about the Kiger Mustangs or to arrange a visit, contact her at 352-369-5970 or by email at yanceyfarms@att.net. You can visit her website at www.Yancey-farms.com