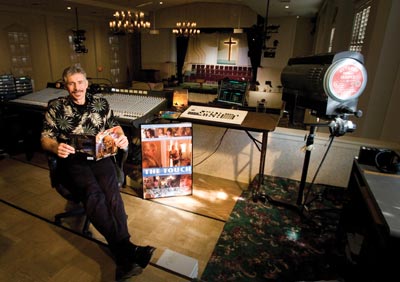 By day, he’s a mild-mannered pastor, but at night he’s a Hollywood screenwriter.

Art Ayris is executive pastor of Leesburg First Baptist Church, and he is quick to tell you that the ministry is
his first love and his true calling. A desire to write stories, however, has taken him on an adventure that now includes Hollywood.

“Several years ago, I had a strong sense I needed to get involved in media,” Art says. “I began writing, and I found that I was a better screenwriter than I was novelist. I had more of an affinity toward screenwriting; it felt better for me.”

He began writing screenplays, and one of them placed in three different competitions. The first screenplay to make it to film was The Touch, a movie based on the life of a woman who was helped by the Women’s Care Center of First Baptist Church in Leesburg. The movie not only chronicles the true story of a young woman named Hannah, but it also shows the struggles of the congregation when trying to decide how best to reach people in need.

The movie is very realistic, featuring many places that most church-going people would never see and the temptations that many people are able to resist.

“Even though I’m very much a part of my church and its life, I’m also comfortable being with people who might not necessarily be followers of Christ,” Art says. “There were some church people not happy with me for making a movie that dealt with the seamier side of life.”

He expected the negative reactions to the film and has stood firm. He founded his own media company, Kingstone Media Group, and as its CEO and chief creative officer, he writes, producers, and manages the company’s projects, which include films, novels, comic books, and graphic novels.

If awards are an indication of success, The Touch is well on its way. The movie received awards for Best Feature at the Independents’ Film Festival, Christian Agape Film and Theater Awards, Angel Awards, and Jokara Film Festival. It is being distributed in domestic and foreign markets.

“It has already been translated into Arabic, Farsi, Hakka Chinese,” Art says. “It’s about to be distributed in a whole bunch of other languages, and it’s beginning to get a lot of airplay.”

Art is most pleased about the response to The Touch and the stories it has generated. A woman recently called the church from Gainesville, saying she wanted to get copies of the DVD for her friends because the story was so similar to her own.

“Three months ago, a lady who was on drugs in a hotel in Kissimmee saw the movie on TV and decided not to get an abortion,” Art says. “She called our church from Kissimmee and is in our program now. We’re hearing stories like that from all over North America and Canada.”

Wanda Cohn, director of the Pregnancy Care Center at First Baptist Church, feels the movie is a powerful instrument for sharing God’s love.

“A lot of people view the movie who normally wouldn’t see a story like this, and it touches them,” Wanda says. “The more Christians get involved in this kind of media, the better it is. It’s a great way to show what Christ can do in your life.”

The Women’s Care Center at First Baptist Church has ministered to hundreds of women through the years, and Art says that close to a 100 percent of those women have been sexually abused or molested in some way. Because The Touch is a true story, other women have hope that they also can change their lives just as the film’s main character does.

Another positive result of the movie is that other groups around the nation are starting their own women’s shelters like a group in Oregon that recently called. Art says many people believe this kind of community ministry is what the church should be doing. Being able to share the story is making a difference in more ways than he thought it would.

“The movie is basically a parable, which is how Jesus taught,” Art explains. “He didn’t do three-point sermons like we do.”

He adds that there’s talk now about a sequel that he’s hoping to do soon. Lifetime Network is currently looking into using the movie on its channel.

Receiving calls from more than 100 agents convinced Art he was taking his desire to write in the right direction. He eventually signed with an agent in Boston who is currently talking with HarperCollins and Penguin Putnam about rights to his book, The Redemption of Akin Apot.

This book tells the story of a Sudanese village where the men and boys are killed and the young women are kidnapped to be slaves. A young girl’s father survives and searches for her with the help of an American photojournalist.

It’s a timely story, with an account of the atrocities in Sudan in a recent TIME Magazine story. Sixth Sense Productions has taken the option for Art’s film based on the story. Ayris recently met with platinum rap star Akon who is interested in starring in the movie and doing a soundtrack. Negotiations are still pending on the project. While in Los Angeles for this meeting, he talked with Laurence Fishburne’s agent at Paradigm.

“The distributor goes to church with Denzel Washington and Samuel Jackson,” says Art. “Once I finish writing the script, he wants to take it to Samuel Jackson to see if he would be willing to do a part in it.”

Though he sounds like a true Hollywood player, the mild-mannered church staff member can still be found in his office at the church on weekdays, living out the principles he shares in
his stories.