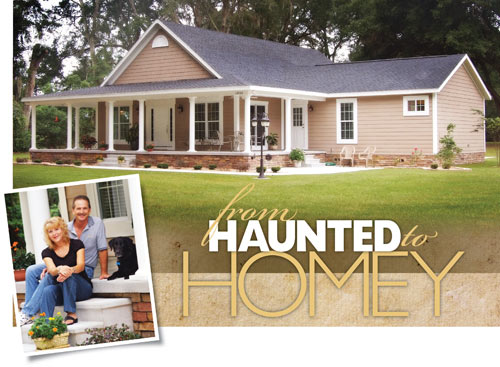 Kent and Lori Croy’s this-old-house project came complete with an identity crisis. The wooden structure sat on odd, short stilts like a beach house in the middle of a five-acre pasture. Maybe, at one time, it was going to be a barn, hence the oversized, rolling front door and hay loft door on the left end just underneath the eaves. Maybe someone decided to add living quarters, explaining one lonely dormer perched on the roof on the opposite end. 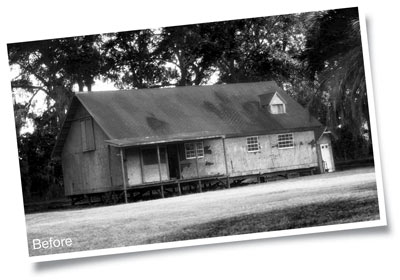 Either way, no one ever ended up living in the strange structure, which led to neighborhood stories that it was haunted. For years it blended into the rural landscape just off Hwy 329 in Reddick. Countless children peered out the school bus windows at it as they went to and from North Marion Middle School. A few probably thought this would be a great place to have a Halloween party. After all, it was a spooky-looking old place.

That’s even what Kent and Lori, who were driving around with a list of properties for sale, thought when they pulled into the driveway and stopped at the locked gate. 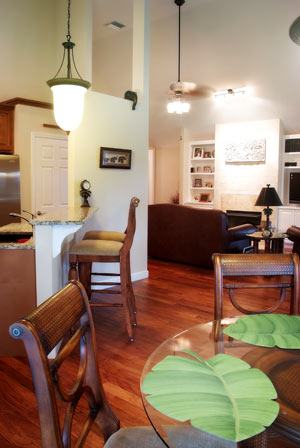 “The property wasn’t even on our list,” recalls Lori, 46, a retired Boca Raton police officer. “But it was a pretty piece of land with lots of oak trees and [it] caught our eye. Then we called the real estate agent listed on the for-sale sign and were told the property was actually under contract. We gave the agent our information and went home to Lake Worth.”

Two weeks later the real estate agent called to say the deal on the property had fallen through and it was indeed back on the market.

“We really liked the property,” says Kent, 53, a licensed certified contractor for 28 years. “But we were tied up with work and family obligations and just couldn’t get back to Ocala. We decided to go ahead and buy it on just that one look from the locked gate. All of the paperwork was taken care of through the mail. We got the keys to the place in the mail, too.”

The next time the Croys visited what was now their property, they actually got a look inside the old building. At some point in its past, the structure had become a kind of rural pseudo-storage facility. When Kent rolled open the door, he and Lori stared in disbelief at all the stuff inside. It was so jam-packed with junk that they couldn’t even get in.

“Even though we were still planning to tear it down at that point,” says Lori, “we wanted all that stuff out of there.”

And that’s when inspiration struck. Being able to actually walk into the building changed Kent’s perspective.

“It was actually just a shell with no walls,” he says. “But it was solid and had a nice 15-foot vaulted ceiling. And after I checked it out, I was surprised that it had no water damage. That’s when I started thinking it was feasible to use the original framework to build on.”

The Croys sold their Lake Worth house and began their renovation project in September 2008. Working with David King, an Ocala-based architect, Kent drew what would become ever-evolving floor plans for their new old house.

The renovation literally began from the ground up. Since the structure sat on those 30 odd stilts, 6-inch-by-6-inch stubs resting on 2-inch-by-2-inch concrete pads, cement stem walls had to be built. Then concrete was pumped in to form the house’s foundation. From there, the glued-together, particle-board siding was stripped off to expose the structure’s exterior stud walls. This was the skeleton on which the new home would be built. 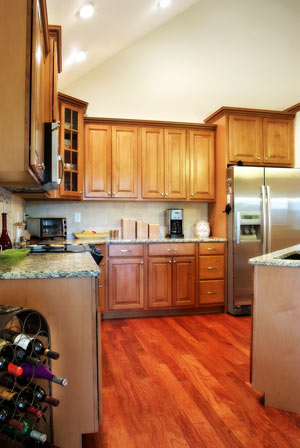 New window and door frames were cut in, fiber cement siding added, with a new shingle roof serving as a crown. Then there was all the other subcontracting work—plumbing, electrical, dry walls—and along the way, a master bedroom and garage were added.

Always a hands-on builder, Kent worked alongside the subcontractors. He did much of the inside carpentry, including the custom wooden kitchen cabinets and bookcases, laid tile on the floors and around the fireplace, and poured concrete for the wrap-around covered porch complete with unique PVC-pipe columns. One of Lori’s roles was to provide the finishing touches, or as she describes it, to serve as the designated shopper.

“Lights, doors, sinks,” she says, “all those things that really make a home.”

Married for 17 years, Kent and Lori conferred on the details every step of the way. They didn’t always agree, but eventually found middle ground between form and function.

For instance, Kent had to be convinced it was necessary to have two individual closets instead of just one large closet in the master bedroom. Lori had to be swayed that a concrete wrap-around porch would be better than a wooden deck. Kent wanted economical bricks to trim the porch foundation while Lori preferred the prettier fieldstone. Lori prevailed on that one, and Kent is still spending his free time adding the stones, like pieces to a puzzle.

They both agreed on building the most energy-efficient, environmentally friendly house possible. All of the windows and doors and most of the appliances are Energy Star-rated. The air conditioning unit uses Puron, a refrigerant touted as better for the environment than Freon. The AC unit and the water heater are located inside the house in a hallway closet, making them even more energy-efficient. The crawl space beneath the house’s floors, wooden and carpeted, is insulated, and the ventless gas fireplace is 99 percent energy-efficient.

But the Croys did not sacrifice function for aesthetics, rather integrating the two seamlessly. In March 2009 they moved into a warm and inviting 2,040-square-foot, three-bedroom, two-bath home. Great views looking out into the oak tree-accented five acres are afforded from just about anywhere in the house. Inside, the focal point of the home is the kitchen/great room area highlighted by wooden floors and the 15-foot vaulted ceiling. Outside on the wrap-around porch, just pick your favorite spot to sit with a cold glass of lemonade and enjoy one of Florida’s famous sunsets.

When asked about the most surprising part of the renovation project, Kent and Lori give the same answer.

“After all the work and stress, when it was all done, we both looked at each other and said we’d like to do it again,” Lori says with a smile.

To which Kent, also smiling, adds, “It was a lot of work, but it was a lot of fun, too. Creating a home from what was here originally has been very gratifying.”

And speaking of what was there before, passersby are likely to want to know what happened to that old haunted house.

Simple. It became a home.