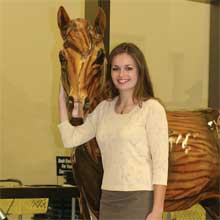 This past school year marked the third annual Ocala Style $1,000 Writing Scholarship. Like last year, Ocala Style chose to reward one high school senior with the publication of their winning essay, an exclusive photo shoot, and $1,000 for college expenses. Our review board was impressed with the quality in all of our submissions, but one application clearly stood out:

“Girls, I want to talk to you about something…”

Great, what did we do now? I think. I immediately ran through a checklist in my head, an important battle strategy to master against the parentals. Chores? Check. Break anything as of late? Not that I remember. School? Not even a concern. Hmm, this must be big, or maybe it’s all Jenn’s fault!

“Your father and I have been talking about moving.” She waits for some sort of response.

“Where to?” we ask hesitantly.

“Is that the new subdivision across town?” I ask at the same time.

“O-cal-a. It’s in Central Florida, about an hour north of Orlando.”

Mental freeze. A map of Florida appears before my eyes — nope, don’t recall an Ocala. But more importantly, O-Town is definitely not a hop and a skip across town — it’s across the state!

My sophomoric life shattered at that very moment, in little pieces if I might add. My second year into high school and moving was nowhere on the agenda. In fact, moving ranked right up there with horrendous yearbook picture, no date for prom, and rejection from first college choice. Just plain not good.

The conversation was a long one that evening. After a two-hour discussion, we realized that our parents’ “talking” was pretty much a plan set in stone. They said they passed through Ocala on business a couple months ago and had looked into it ever since. Additionally, our once peaceful coastal city of Port St. Lucie was no more. Our street alone had houses popping up like mushrooms. None of us liked the chaos that came with the construction of a growing city and my parents always talked about moving.

But moving when I had graduated or sometime far off in the future. Not now!

They assured us that we’d love it, although that meant little to me. So, the next week the house was on the market, we had a realtor’s sign pitched in our front yard, and the rest was history. My life was history. I was history.

My parents visited Ocala several times over the coming weeks in search of our new abode. I claimed I had too much homework and “stuff” going on. In truth, I didn’t want to give in to their evil plot. Well, the inevitable came — it always comes. They found a house. I had little say on the matter nor did I care to say much except, “I like the house we’re in now,” just like a 5-year-old who doesn’t want to go to bed.

In order to see what Ocala was all about, they took loads of pictures, even a video. I’ve always been a sucker for the little things — I guess one could say I’m easily amused. My mom knew how to hit the right buttons when it came to that.

From what I was able to gather, my parents stuck out, people without a clue of where they were going. Tourists. Everyone helped them out with directions and everybody waved. It was as if my parents had described Pleasantville. I didn’t believe it. I couldn’t believe it. Surely, they were exaggerating. Then I saw the videotape. There it was, my mom’s voice being picked up by the camera as she recorded our future home.

“Honey, did you see that lady wave?” And so many more. The tape captured the abundance of horse-, deer-, and even duck-crossing signs. Funny hoax? Nope, they were real. So were all the country kitchens, the horse statues in front of nearly every major local business, and the cowboys. All the little things that make Ocala, well, Ocala. The place seemed okay.

Finally, I’d put if off long enough, my first trip to this haven that my parents professed about. On the trip up, I noticed the geographical change immediately. The trees, dare I say, were bigger. Not to mention that they weren’t like the trees on Florida’s south coast. Not your typical palm tree, but rather sprawling oaks and magnificent magnolias. So I liked the trees, big deal.

Yet, it didn’t stop there. There were hills in Florida! I always thought Florida was one big orange grove with palm trees and a coastline. To think, there was more to this, a whole theory blown out of the water! And then it happened… I was excited. I actually wanted to learn and see more of this town. There were horses everywhere, cantering in vast pastures enclosed by white fences. We stopped at a gas station to grab some drinks. That’s when I heard it — that ol’ southern drawl I’ve come to love and the country hospitality that goes along with it. The use of “sir” and “ma’am” still alive.

But there was more. There were still restaurants, plenty of Wal-Marts, and a mall — it was a budding town. There was even an IB program in this county. It was only a matter of switching schools. Leaving behind old friends to make new ones. Even with a promising future, it was still hard to leave behind the past.

My first day at Vanguard was something else. The teachers took special care to make sure I was included from the start. More importantly, my peers became my friends as we both realized that horse country or orange country still breeds similarities in a teenager.

It was anything but easy. Nevertheless, in retrospect, moving to Ocala was probably one of the best decisions my parents ever made. Even today, I still grin at a deer sign, smile at the friendly people, and have learned to wave like a pro.

Angelika Zych is a senior in Vanguard High School’s IB program and serves as the student body president. She belongs to the Spanish club, the National Honor Society, and the debate club. Angelika plans to attend Florida State University. Please comment on her essay at Angelika@ocalastyle.com.

Parents, watch for next year’s Ocala Style $1,000 Writing Scholarship. Your son or daughter could be on these pages in 2007!