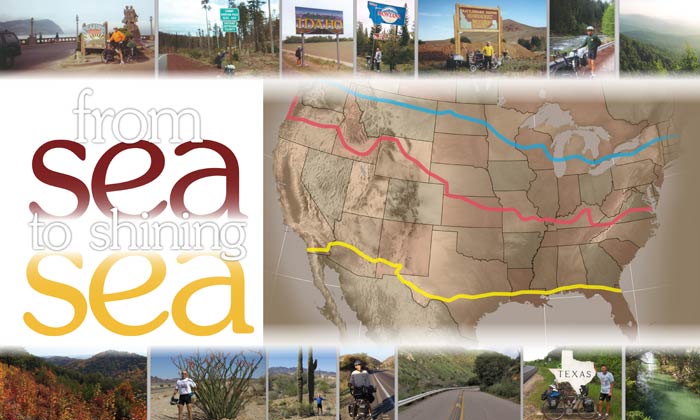 When Ray Carey set out to ride the TransAmerica Bicycle Trail in 2004 at age 64, he wasn’t sure he could finish one trip across America, much less three. Described as the “ultimate bike trail” by Outside magazine, the 4,262-mile trail begins in Astoria, Oregon, and runs to Yorktown, Virginia. Along the way, riders pass through the Rockies, the Grand Tetons, and Yellowstone National Park. Ray completed the grueling trip in 52 days, averaging about 81 miles a day. In 2007, he rode the Northern Tier Trail from Washington State to Maine in 47 days.

Since completing his third journey on the Southern Tier—from San Diego to St. Augustine—last April, The Villages resident has been invited to speak to numerous groups about his amazing excursions. 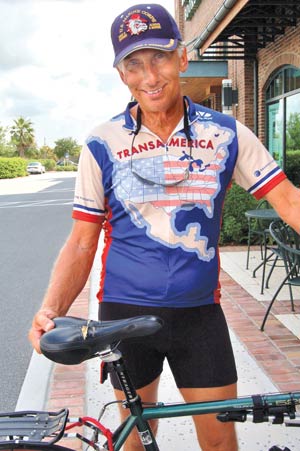 “That first trip was the hardest,” he says. “We were going through the mountains by the second or third day, and it’s hard to duplicate that experience in training. I had a lot to learn.”

Before he got out of Oregon, he was already second-guessing himself. His Achilles tendons were so swollen after getting through the Ochoco Mountains in Central Oregon that he could barely ride or walk. He repeated to himself over and over Lance Armstrong’s famous quote: “Pain is temporary; quitting lasts forever.”

Then, in Prineville, Oregon, he learned firsthand how biking enthusiasts look out for each other. A former Marine, Ray always rides with an American flag on the back of his bike. Unbeknownst to him, the flag had come off near Prineville. A man in a truck pulled up beside him and asked him if he’d lost something.

Not only was Walt Bolton a “street angel,” one of the many biking enthusiasts who help cyclists on the trail, he was also a retired football coach who had access to a whirlpool and liniments for sore muscles. Walt and his wife invited Ray and his fellow biker, Ed Williams, to stay a couple of days.

“I could have torn my muscles completely if it had not been for them,” says Ray. “I thought about quitting, but after a couple of days of rest I was ready to get back to the trail.”

Although he rode bicycles as a child, Ray did not begin riding seriously until later in life. The idea to ride cross-country, however, had been in the back of his mind since 1976. He was a high school principal in Buhler, Kansas, when he saw thousands of bicyclists coming though his town in celebration of the American bicentennial. He let some of them camp in his backyard and was mesmerized by their stories about seeing America “up close and personal.”

Nearly 28 years later, he retired as a high school principal in rural Kongiganak, Alaska, and made plans for his first cross-country ride. His mission was to ride in honor of Vietnam veterans and to find out if Americans were still patriotic. He advertised for a companion rider in Adventure Cyclist magazine and found another ex-Marine who had previously completed a cross-country trek in 2000.

“Riding with Ray helped me focus more on enjoying the journey versus blazing toward the destination,” Ed explains. “In retrospect, I imagine that he was a better riding companion for me than I was for him.”

Ray describes Ed, who has accompanied him on all three cross-country adventures, as a gutsy rider. In the summer of 2007, the duo was joined by Mike Craft for the Northern Tier trail that closely parallels the U.S./Canadian border from Washington to Maine.

“The second trip was the most fun,” says Ray. “We camped a lot and had prevailing winds that helped us make better time.”

The trio left the designated trail in Michigan to ride through eastern Canada and to catch a glimpse of Niagara Falls. They covered 3,715 miles between May 30 and July 7, but some of the most challenging riding was in New Hampshire, near the end the trail.

“The Kancamagus Pass at 2,855 feet was probably the toughest part of that trip,” says Ray. “I had never heard of a 20-percent grade, but I believe that was one. I stopped and walked my bike at one point.”

This pass also served to remind the three men of their good fortune. Ray witnessed one of the other cyclists flip over his handlebars on the descent. 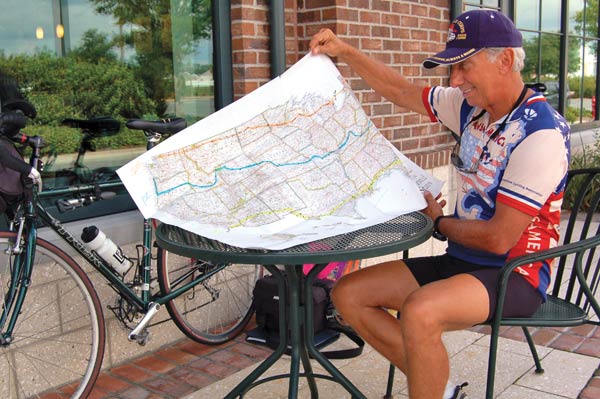 “When I caught up to the other riders, I had to tell them what had happened,” Ray says somberly. “I don’t know how he could’ve lived through that.”

Ray and Ed teamed for their third ride together last spring. The Southern Tier trail from San Diego to St. Augustine covered 3,092 miles and would complete the “trilogy” that Ray had begun five years earlier.

They camped a great deal during the third journey, although fellow bike riders who lived along the route often invited them for meals. In Hondo, Texas, they had been riding a long distance before coming to a restaurant. They were famished.

“We ordered the biggest meals we could get,” remembers Ray, “but someone in the restaurant had anonymously paid for our lunches.”

The kindness and hospitality of strangers during all three journeys is something that sticks with Ray. It also offered evidence of his original premise for attempting such trips—to find out if there were still good Americans out there.

The Southern Tier served as the biggest adventure for Ray because he had to complete the final 650 miles from Mississippi to Florida by himself.

Ed and Ray left the trail in Louisiana to make an Easter visit to Ed’s home in Mississippi. They arrived on Good Friday, and Ed’s father-in-law died unexpectedly on Sunday morning.

“I had to decide whether or not to finish on my own,” says Ray. “But I had come too far and was too close to my goal to stop there.”

Ed, who completed the ride a few months later, outlined a map for Ray that would take him through towns in Florida where he could stay in motels, as opposed to camping alone.

Ray arrived in St. Augustine on April 20—40 days after he dipped his bike wheels in the Pacific Ocean—to find his friends and neighbors waiting for him. The impromptu celebration included dipping the wheels of his bike into the Atlantic Ocean, thus completing the symbolic gesture of cross-country bicyclists.

Ray’s enthusiasm for adventure is contagious as he talks about the ups and downs of long-distance bicycle trips. His advice to others, especially to his peers, is positive and encouraging.