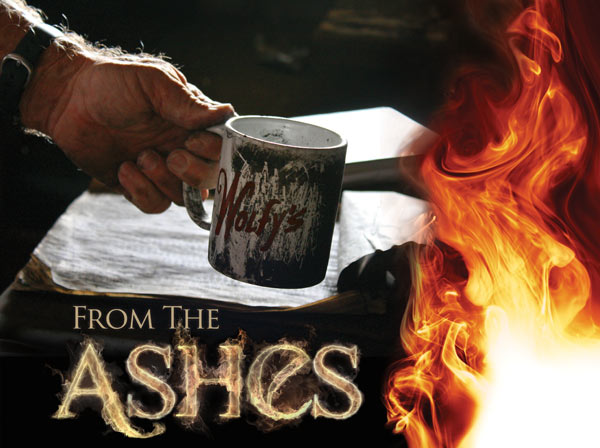 The sign still reads “Kielbasa Breakfast $4.75,” a stark reminder of what once was. A single wooden high chair lays on its side outside the old Wolfy’s restaurant in Leesburg. The edges are blackened by flames, with bright yellow fire line tape secured to the chair.

The charred smell is unmistakable when the doors are pried open. Ducking through the mangled entrance of the once-popular Leesburg restaurant is like stepping into a different—and eerie—world. Adjusting my eyes to the dark and scorched interior, small bursts of color catch my attention. An unused box of Moist Deluxe Lemon Supreme cake mix somehow remained red. Cans of crushed pineapple show remnants of their yellow-and-blue labels. Potatoes litter the floor and bags of gravy mix are covered in soot. The scene is surreal.

The hum of traffic from U.S. 441 doesn’t drown out the sound of hungry flies buzzing through the burned-out restaurant, hoping to find a morsel or two. The faint smell of slowly rotting food mingles with an overwhelming acrid stench. As I inch through the burned building, pieces of fallen tar and gravel roof and insulation crunch under foot. Entering what was once the main dining room, sunlight filters through the caved-in roof, gently illuminating the space. A pendant light sways and creaks in a soft breeze passing through the melted windows. 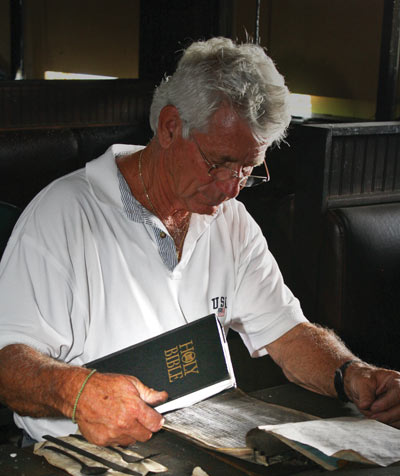 The fire startedin the early morning hours of April 10. The cause? A suspected gas leak that originated in the kitchen. The fast-moving flames scorched the kitchen, traveling up the cooktop ventilation system and through to the roof. The decades-old insulation was no match for the intense heat of the flames and actually fueled the fire. Unable to hold together, the roof caved in, causing the flames to spill into the main dining and public areas of Wolfy’s.

In the dark dining room, tables lay scattered, the business cards that once decorated their tops still readable through the film of soot. The brown leather on the booth seating is bubbled and cracked. Owner John Wolf stands among the ruins of his popular eatery, surveying the damage once more. 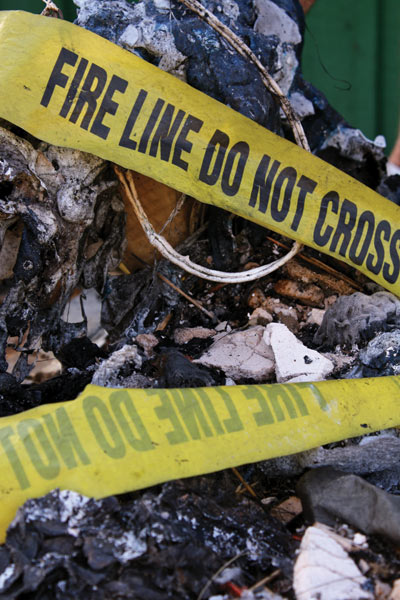 “I owned this restaurant for 28 years,” he says with a sigh. The call came in at 2:15am. “My manager said, ‘Boss, the restaurant is on fire and it doesn’t look like we’ll be able to save it.’ My wife started crying and I told her there was nothing we could do and to go back to sleep. In the morning we started the what-do-you-do-now process.”

Sitting on what’s left of Wolfy’s outdoor dining patio, John shares the story of how Wolfy’s came to be. Before Wolfy’s there was Lum’s, a family chain restaurant famous for inexpensive all-American cuisine.

“I went to work for Lum’s on March 3, 1968,” John recalls. “They sent me to their Miami headquarters for two weeks and when the store opened in Leesburg, I was assistant manager.” 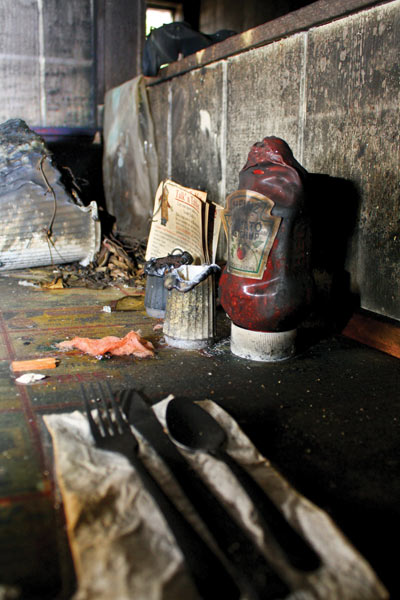 Within 15 months Lums Corporate sold the Leesburg restaurant to a franchise. John was asked to relocate to Miami and join Lum’s at the national headquarters. Over the next several years, John traveled the country, launching new locations as the director of openings, including one in Ocala on Silver Springs Boulevard. John then moved up to director of training and even served as vice president of operations. For a short time, he also served as interim president.

“Fifteen years and 10 days, that’s how long I worked for Lums,” John says. “The franchises were being dissolved and sold off.”

John knew what he wanted to do. In 1983 he hesitantly approached his parents with a request.

“I asked them if they could take a loan out on their home,” he says. “We did it for $45,000 and I assumed the original leases for the Leesburg and Ocala stores. I had no money at the time, but I had motivation.”

One of John’s conditions for taking over the two failing restaurants was that he could change the name. Wolfy’s was born. The concept? Offer quick service and serve great comfort foods like meatloaf, homemade mashed potatoes, biscuits, and grits and gravy.

“Money was never a motivator,” John says. “The desire to achieve success was. Eventually compensation will follow your achievements.” 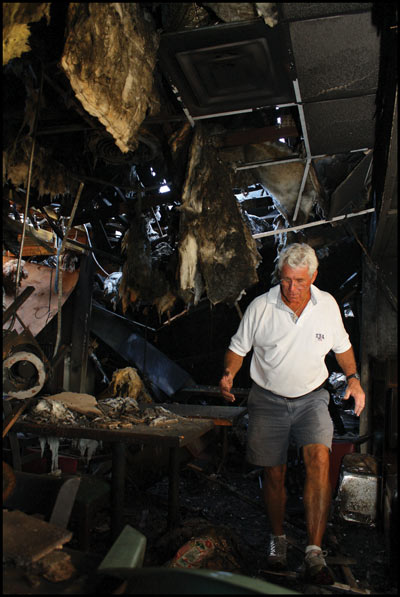 And Wolfy’s did achieve great success. During any given month, 20,000 to 40,000 patrons passed through the doors of the Leesburg establishment. John and his staff managed to turn a failing restaurant into a million dollar business.

John takes a reflective pause, focuses on the burnt surroundings once more, and says, “You know, when a tragedy happens, you have to put things in perspective.”

John says he’s been preparing for a day like April 10 for the past seven years. That’s when his wife of eight years was diagnosed with breast cancer. She beat it. In 2006, however, a mass was discovered on her brain and five tumors were found. Her prognosis was 60 to 90 days to live. That was four years ago. In 2009 the cancer showed up in Sherry’s lung and in 2010 her liver.

“Sherry is 43,” John says. “She’s a tri-athlete and a personal trainer. People may think I’m naïve or uncaring about the restaurant burning down. That’s completely not the case. It just isn’t life or death.

“What’s most important right now is my family,” he continues. “The cancer may have invaded Sherry’s breasts, lung, liver, and brain, but it hasn’t touched her mind, her heart, or her soul. When the circumstances of life reduce you to a point when God is your only hope, then that’s a pretty good place to be. The cancer has made us really take a look at life.” 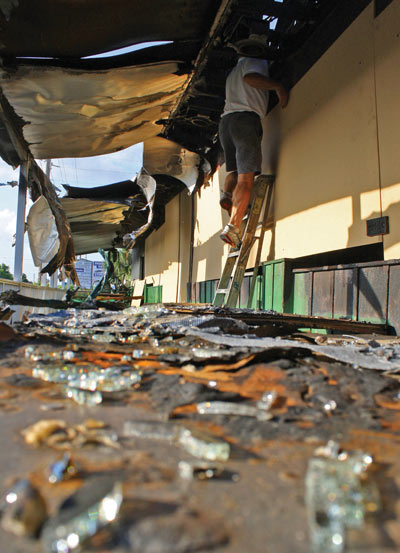 The sound of melted metal soffit slapping against the side of the building brings John’s thoughts back to the fire.

“My desire is to rebuild Wolfy’s. I just don’t have enough information yet to know if that’s my plan,” John says. “I have 32 faithful employees who are out of work. I want to bring back their livelihood.

“This is all about the people,” John adds. “Wolfy’s is a family establishment. The people who worked here and the customers who walked through our doors every day—we’re all a family. I hope to figure out a way to raise Wolfy’s back up again.”

As I readied my notes to end our interview, something on the corner of the patio caught my eye. Amid the chaos of overturned tables, melted ceiling fan blades, and shattered glass, a trio of potted plants lay burned and dried out. Upon closer inspection, though, tiny green shoots could be seen weaving their way through the dried leaves. New life is already emerging.