Ocala architect Rolando Sosa has the mind of an engineer and the creative vision of an artist. He has a remarkable eye for seeing how the smallest details can not only occupy a space but tell a story. 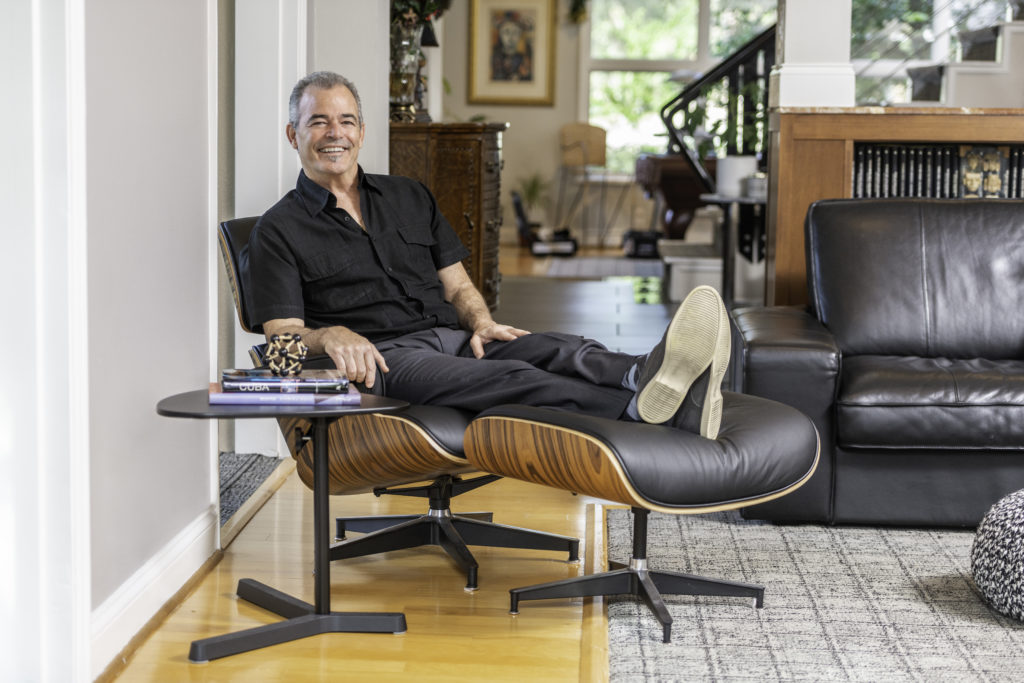 Born in Santa Clara, Cuba, with its Spanish influence and vibrant Art Deco style, Rolando Sosa immigrated with his family to New Jersey when he was 8 years old. When they moved to Ocala, he attended Lake Weir High School, where he would discover his passion for architecture, a career he thought would be “cool.”

It started when he and a friend were figuring out their schedules for senior year.

“I needed a few credits and he was a teacher’s assistant in the drafting class,” Sosa recalls. “I took that course and I loved it. That’s the first time I was ever exposed to design, drafting, architecture or engineering. I thought designing homes and buildings would be so cool so that’s what led me to architecture.” After graduation he continued at Central Florida Community College (now College of Central Florida) to pursue an associate’s degree in building, although he reveals he’d “never met an architect, not even a builder up to that point.”

At the time Sosa graduated, the U.S. was rebounding from an economic recession, but he “applied to a local firm and was hired on.” He started his career as a draftsman with well-known Angus McRae, Architect, and Associates in Ocala, a job 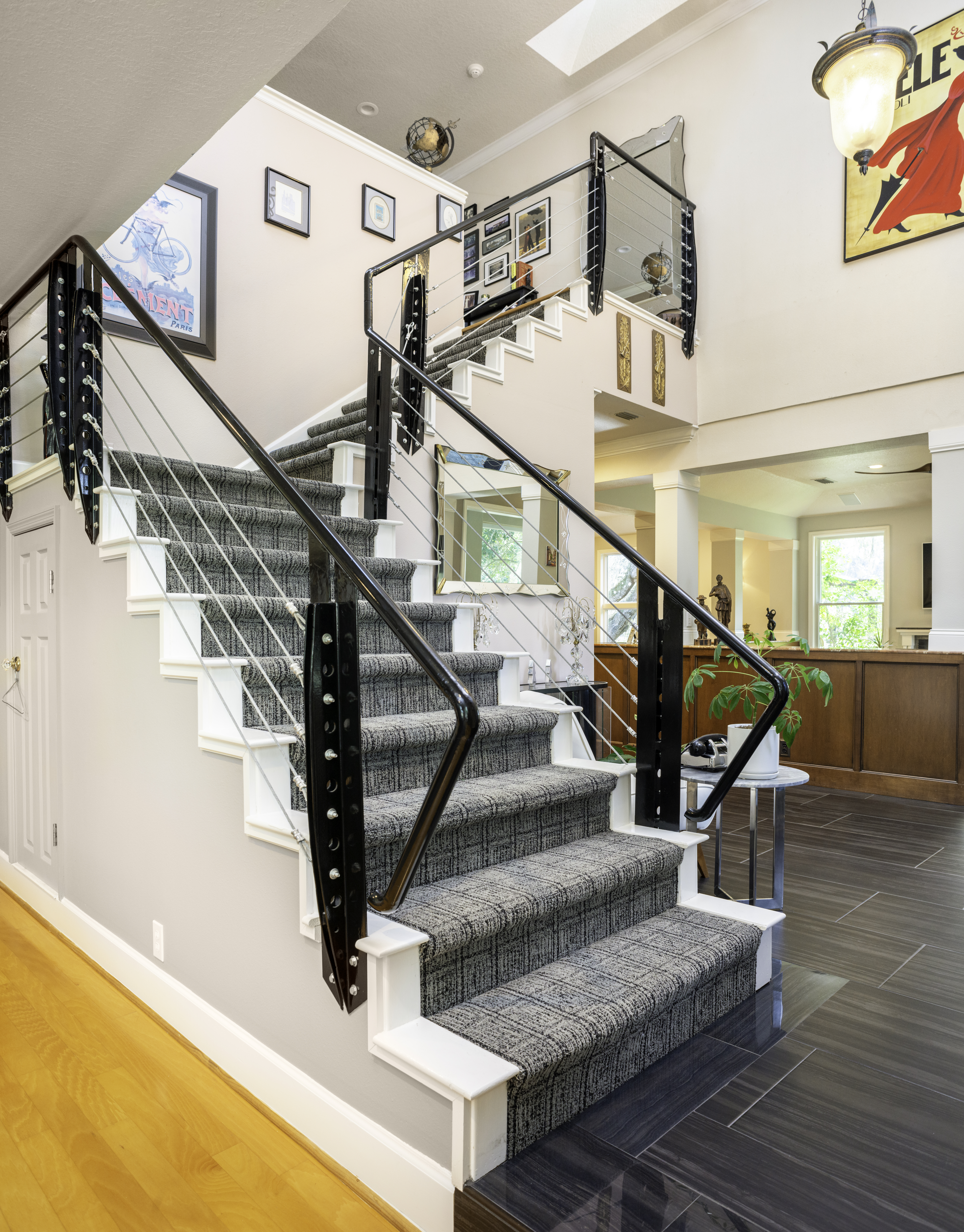 which he laughingly says consisted of “not really sweeping the floor” but “measuring things” and making blueprints, which he says is “not a thing anymore.” He spent 10 years learning the business from the ground up, then he and a colleague decided to open a firm of their own. Eighteen years later, in 1994, Sosa took over the business and changed the name to Architecture Studio. Having his own business gave this devoted husband and father the flexibility to work hard but still make time for his family.

When they moved to their current home 22 years ago, Sosa enjoyed the process of creating a comfortable home for his family. He had a hand in designing the master bedroom suite and his children’s rooms while Sara endowed the house with charming old world elements such as a chandelier her mother brought from Italy and vintage glass doorknobs like the ones she’d loved in her childhood home, to an ornately hand-carved powder room door. Rolando explains to clients that these personalized touches are what turns a house into a home. 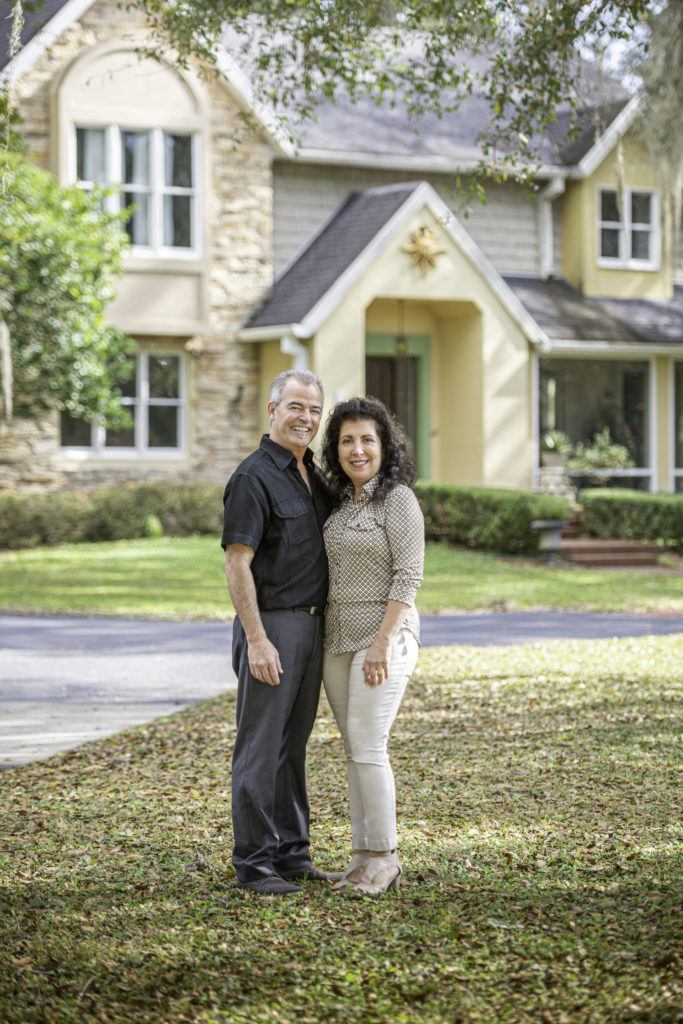 “We didn’t go out and buy all brand-new everything,” he asserts. He found their turn-of-the-century front door at a salvage yard and the powder room sink was salvaged from the Breakers Hotel in Palm Beach. Sosa designed some of the light fixtures and furniture, including the one-of-a-kind staircase that he and his family members installed.

Beyond family, community is important to Sosa. He serves on the Marion County Historical Commission Advisory Board, supports Interfaith Emergency Services and volunteers for Marion Cultural Alliance. He says his biggest charitable gift to date was donating architectural services for Transitions Life Center’s new community center, that opened in fall 2019 to serve intellectually disabled young adults.

“It’s very rewarding” to see how the nonprofit helps the community, Sosa says. When he was approached by a few people on behalf of the charity, he had the ability to help, so he did. “We can’t always do it for everybody,” he says, “but we can do it for a few and hopefully that makes a difference. ”

Over the past 25 years, Sosa has designed a diverse array of projects—from eye-catching, ultramodern South Florida luxury homes and Marion County equestrian estates to private-public partnerships such as the Marion County Public Library Headquarters and nearby Marion County Veterans Resource Center. Each building is functional but made unique with interesting touches, such as the seals representing the five branches of service that make the Veterans Resource Center clearly visible from East Silver Springs Boulevard.

“Attractive but yet cost effective and functional is kind of what I do for a living,” Sosa says. “If money was no object, anybody can design a billion-dollar facility that looks dynamite. But the key is designing a great facility that looks dynamite within a certain owner’s budget. The complications arise when an owner wants that ‘Wow!’ project but they have a tight budget. My job is to figure out how can we make this happen.”

Staying on budget is vital for a city or county building project, Sosa explains. He enjoys working on projects designed to 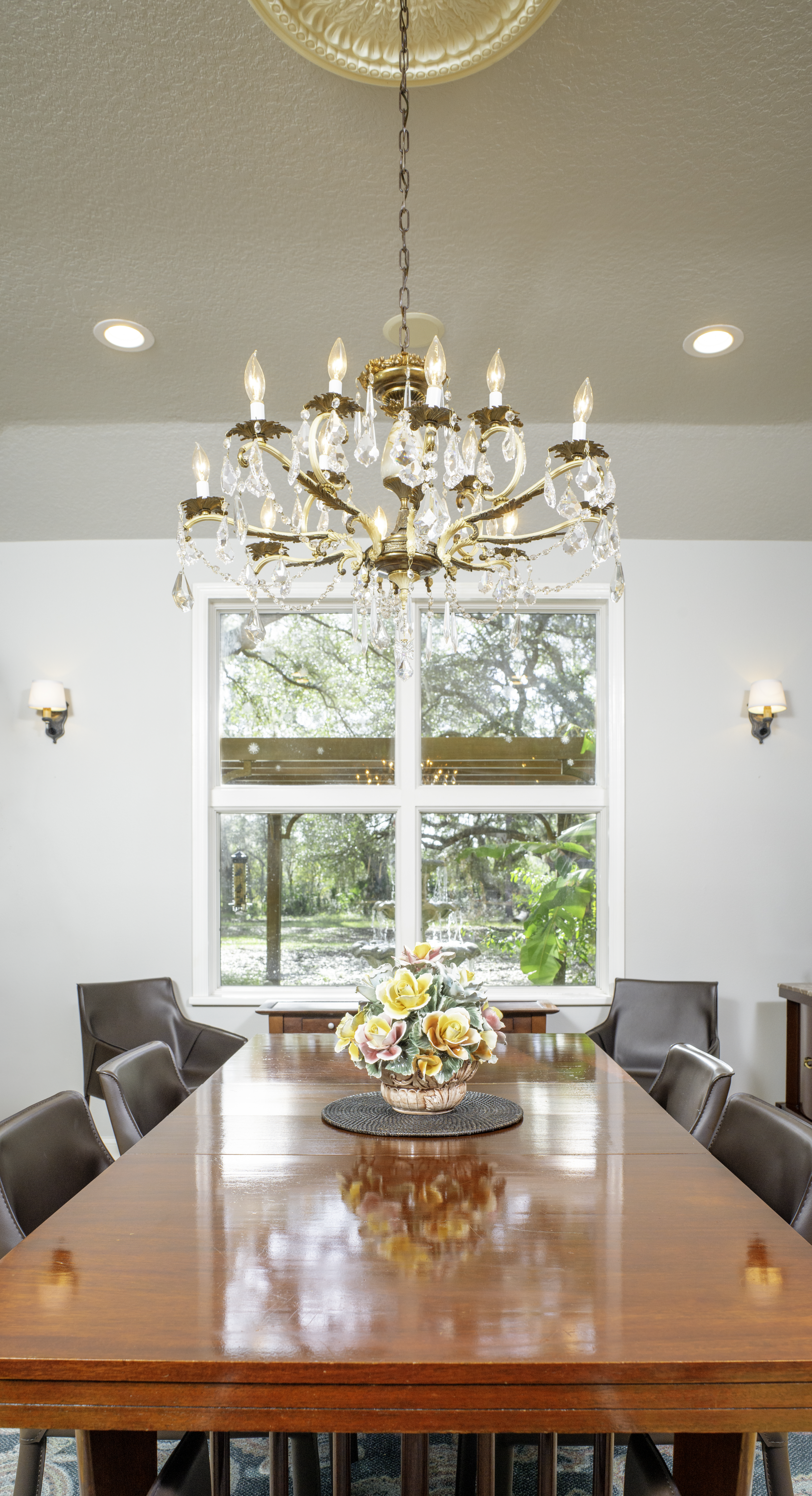 boost downtown growth, and one of his newest endeavors is designing a new apartment project that he has dubbed Tuscawilla Art Apartments.

“My inspiration for this project was that Tuscawilla has become an art park,” he shares. “I found out the city had the property and wanted somebody to develop this. The studies showed that there was a large need for apartments in our downtown/uptown or midtown areas.” His renderings show two-story, pastel-colored apartments with a decidedly modern, upscale vibe. Sosa figures these new rentals near the north end of the Osceola Trak will attract professionals who work in the area and people “who want to be in the downtown area.”

“I’m not exactly a young professional,” he says with a laugh, “but I go downtown, I go out to dinner, I go out to drinks…I wouldn’t mind walking five minutes to downtown.” He believes the neighborhood’s proximity to downtown and the Reilly Arts Center makes the new apartments an important project for the city. He promises the development will be “something interesting, something artsy” and will have the “wow factor” that he’s trying to elicit.

Sosa has collaborated with other local businessmen who share his vision for a revitalized downtown. He and Holland Drake of Drake Construction Services took inspiration from similar-sized cities that have transformed their downtowns, including Winter Garden, Florida and Asheville, North Carolina, with their 302 Broadway project in downtown Ocala. The head-turning renovation of an old 1960s telephone building into hip, urban residential lofts opened in 2018. Their newest creation is Bank Street Patio Bar & Grill, which opened in October as an instant hotspot, with its industrial-chic shipping container layout softened by cozy outdoor seating areas.

“Rolando and I share a common passion for bringing vibrant trends to downtown Ocala,” Drake says. “We both have many visions from larger cities that draw a crowd.”

“I think Ocala was ready for something along those lines,” he says of Bank Street Patio Bar & Grill. “And you can tell by the enthusiasm it has received. Right now the buzz in the area is certainly that location.”

Just a couple blocks away, another destination for downtown cocktails is getting ready to open and is also sure to create a buzz.

“The Tipsy Skipper was basically a complete redo of an existing building,” Sosa says, describing a relaxed tropical vibe brought to the new tiki bar next to the historic Marion Theatre. He thinks the craft cocktail lounge with a tropical Hawaiian-Polynesian fusion décor will be a great gathering place to “hang out, relax and have a conversation.”

Sosa was also involved with the highly anticipated Hilton Garden Inn Ocala Downtown, which has been under construction at the downtown square for the past two years. 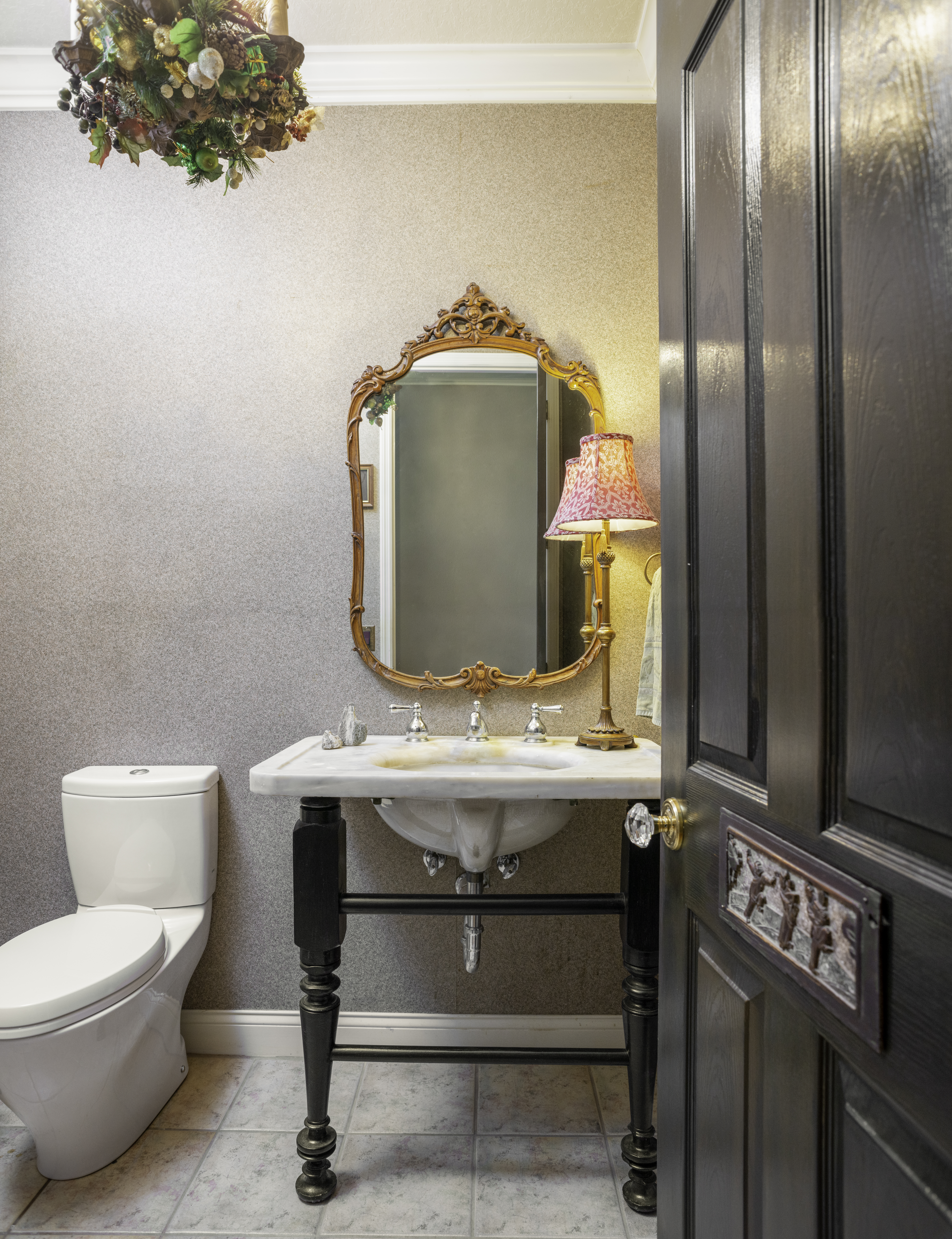 “I helped Danny Gaekwad with the project submittals and some master planning of the project,” he explains. “I basically laid out the footprint of the building on the property.” After helping Gaekwad Development submit the package to the City of Ocala, Sosa was retained to design the hotel’s adjacent two-story, mixed-use building which is expected to house retail space on the first floor and apartments on the second floor and will go into construction after the hotel opens.

Sosa enjoys the challenge of repurposing existing spaces, and recently partnered with owner Pete Garcia and Stentiford Construction Services to do the architectural and interior design work for Ocala’s new Gold’s Gym, which opened in January in a former Winn-Dixie on Highway 27.

“Gold’s Gym is an altogether different project just because of size and complexity,” Sosa says. “At the very beginning we got to be very creative and we got to be creative every step of the way.” He used even the smallest design details, like door handles for example, to make the gym interesting. His creative mind’s eye can clearly visualize even a tiny feature’s design value, functionality and safety all at once.

Being a successful architect, he explains, is “a whole bunch of things that are innumerable—from door handles to carpeting or ceramic tile or wall finishes, lights, plumbing, air conditioning, and heating. All of that is what an architect does,” he adds. “If you walk into a building and you’re comfortable in the summer, you’re comfortable in the winter, then the architect and the engineers did a great job to make that happen.”

Architecture isn’t work to him, Sosa explains, because he loves what he does. So, decades later, the “cool-sounding” job that piqued his interest in high school has turned out to be a wildly successful and rewarding career with plenty of “wow factor” moments.