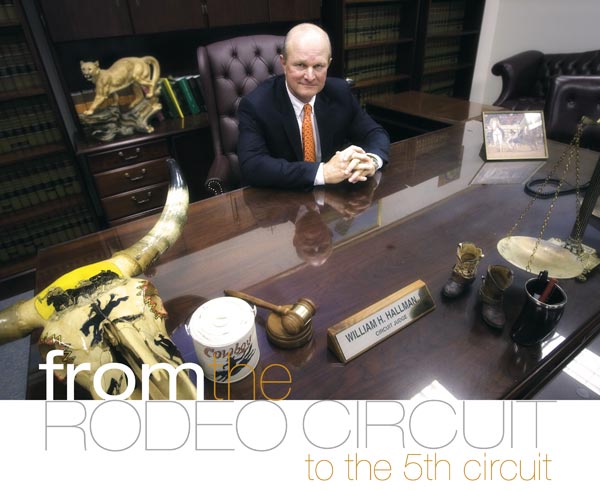 A young William “Bud” Hallman had a third-grade essay assignment.

“I wrote that I wanted to be a cowboy and a lawyer when I grew up,” Hallman recalls. “I had to explain how I would do that. The teachers got a laugh.”

They wouldn’t laugh now. He is both and more. It is a complex, but logical meld. Hallman, a six-foot-four, sixth-generation Floridian, is the son of attorney William Henry Hallman II and Helen Renfroe Hallman of Hendry County’s historical Red Cattle Company.

Evidence of the career mergers appear throughout the Sumter County judge’s chambers. Books about Florida ranching are in his library. The book At the End of the Oxcart Trail mentions him. Artwork by famous Florida friends Jimmie Scott Osceola and Joe Johns grace his walls. An old photo of “Sissie” the cow hangs above shelves of legal reference books. Photo albums from rodeo competitions are not far from certificates of legal achievement.

In 2003, Governor Jeb Bush appointed Hallman Fifth Circuit Court Judge in Sumter County. This was during the time he had a private general law practice in Brooksville. From 1992-1995, he served at the Florida Fifth Judicial Circuit State Attorney’s Office. Hallman’s ranching and rodeo career comes by way of the University of Tennessee at Martin and the University of Florida.

“After three years at Gainesville,” Hallman reflects, “my father called me to his office, asking about my major.”

Unlike his essay, it was narrowed to one choice.

“I told him I planned to be a cowboy,” Hallman continues. “He said he’d cut off my funds, and I was to let him know if I changed my mind. That began a life of working on ranches and riding in rodeos.”

In time, Hallman’s father changed his mind and hired his son as ranch manager.

“My father told me to sell enough calves to bring $50,000 and not to sell one calf more or less than necessary,” Hallman relates. “I was $10 over. I expected accolades, but he said ‘you’re going to law school.’”

Hallman still did not want to go to law school.

“I’m a rancher,” Hallman told his father. “My father said, ‘not anymore, I’m firing you. You will go to law school. I always get my way.’”

The conversation was a catalyst.

“I decided when I took the cowboy route, I wouldn’t live long enough to worry about anything else,” Hallman says, smiling. “I won an International Professional Rodeo Association (IPRA) steer wrestling event in Nashville. My father heard about it and called me for an appointment.”

“Unfortunately, he died that night,” Hallman somberly states. “That’s when I thought about law school.”

Hallman continued wrestling steers as well as estate issues with the ranch.

“I was spending so much time with lawyers,” Hallman shares, “I decided to be one.”

He went to Nova Southeastern University Law School. He had earned his Bachelor of Science in Administrative Studies from nearby Nova earlier.

“I drove 70 miles to school in an electric-blue pick-up truck with big tires and dual exhausts,” Hallman chuckles. “I worked cows at five o’clock in the morning and went to law school in my ranch boots. But I made the International Finals Rodeo before starting Nova, almost without trying.”

He and his father both got their way.

He earned his law degree and was admitted to the Florida Bar in 1992. He made the Southeastern Circuit Finals Rodeo while at the State Attorney’s Office. He was 40 years old at the time.

“For 15 years I didn’t get on a horse,” he adds. “I tried golf. A man told me that people like me made golf dangerous for people like him. I threw my clubs in the cart and went back to rodeo. It’s more relaxing and less violent!”

Last year, Hallman returned to the rodeo professionally, after a prodding from Florida rodeo champion Spunk Sasser and Leroy Mason, another rodeo legend and mentor.

Hallman’s wife, Cathy, and daughters Amanda and Rebecca support him. He plans to team rope to pursue an all-around title.

His title at the courthouse comes with more trepidation than golf and rodeo combined.

“You make 50 percent of the people mad when you’re a judge,” Hallman explains. “The ultimate result is to reach something fair. That might make both sides mad.”

Hallman was also a rodeo judge. The disparity in discipline between law and rodeo is less than one might think. Both steer wrestling and the law require preparation and immediate decisions.

“You’re ready in court because you’ve been practicing back here with the books and doing legal research,” Hallman explains. “Like in rodeo, when you think a steer is going one way and he goes another way, you have to be prepared.”

He also makes a case for the dwindling numbers of ranching cowboys in Florida.

“Some people don’t realize that not long ago Florida was much like the Wild West,” Hallman recalls. “Cattle was king. Bordering ranches were 30 to 100,000 acres, and cattlemen were good stewards of the land. We’ve lost some of that generational care.”

Hallman says that his great-grandfather bought land at three cents an acre.

“I realize three cents was hard to come by then,” he adds.

Money was scarce, but cowboys
were not.

“When I was young, it was unusual not to see someone with spurs on the boardwalks in towns like Immokalee
and Okeechobee.”

Today, Hallman has worn a suit, but tonight, he’s putting on Wranglers and jumping off a horse. His transition from the legal arena to the rodeo arena may seem like an anomaly to some folks, but Hallman takes it in stride.

“Someone saw me at The Butter Bean restaurant near the Webster Livestock Market, and they didn’t recognize me in my jeans,” Hallman says. “When I’m dressed in a suit, though, people from rodeo don’t know me.”