The story behind my mother’s battle against breast cancer isn’t unique. Walk into any cancer treatment center and you’re likely to find at least 10 women in the waiting room who are there to undergo the same procedure or receive the same treatment. Although my mom shares this experience with hundreds of other women throughout our community, maybe even someone you know, this isn’t just her story, it’s mine as well. And if at least one person finds comfort in a common experience or one woman schedules her long-overdue mammogram, then it’s worth sharing.

Breast cancer affects women—and men, although much less frequently—of all ages and races. They’re grandmas, aunts, daughters and mothers, both young and old.

Before this disease hit so close to home, my idea of who could develop breast cancer was more than slightly naïve. As it turns out, one in eight women will develop breast cancer sometime during their life. While the largest percentage of new cases are diagnosed in women over 70, the second largest age group is 40 to 59, and one in 206 women under the age of 39 will develop breast cancer. There is no age group that is 100 percent protected, no women that should not be educated on the preventative measures necessary. My mom was 52 when she received the diagnosis.

Not one to think in terms of preventative medicine, my mom would never have been the spokesperson for getting a yearly mammogram. Rarely making it to the doctor’s office for anything other than an absolute necessity, she was at least a year overdue for her annual scan. 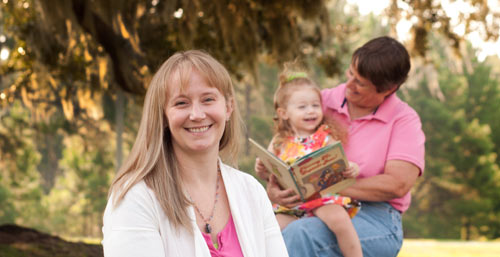 Early in the summer of 2010, she began having digestive issues, ultimately leading to the removal of her gallbladder. During this time, she was required to schedule many doctors’ appointments—probably more than she’s been to since giving birth to me. During one of these appointments, her doctor began reviewing other routine medical information and asked when she had her last mammogram. When she gave a nondescript answer, he advised her to do it now, “while she was in the doctor mode.”

As I’m sure you have guessed, this mammogram changed everything. After one scan with abnormal results and a second scan that warranted further testing, we had a positive diagnosis. I often think back to where we would be today had she not required gallbladder surgery.

I received the phone call from my mom while I was at work. It had been a week or so since the last mammogram, and although I should have been on pins and needles, I wasn’t expecting the call that particular day. Needing a bit of privacy, I took the call outside.

You hear stories about how people tune out the details after they’ve received devastating news. I can attest that this is a spot-on description. It wasn’t until after the call that the emotions came, but in that minute, listening to my mom describe the details of future procedures and appointment dates, I couldn’t get out of my own head. I remember needing to not cry. I wanted to be strong for her. I remember asking a few key questions but not really hearing the answers. I could only think about the worst-case scenario.

After the call, I sat outside for a long time. If I didn’t move, I wouldn’t have to process the information I’d just received. I wouldn’t have to talk about it. When I walked back into my office, the look on my face must have told the entire story. A friend asked, “What’s wrong?” And I lost it. I heard myself say, in what would be the first of many times, that my mom had breast cancer. I immediately felt the need to get away.

People deal with situations like this in different ways. Many want to be around loved ones. I wanted to be alone, to process the most devastating news I had ever received by myself. I could have gone home to my husband and my daughter. Instead, I went to the gym. It’s a strange reaction now that I think about it. I knew if I went home my husband would want to comfort me and assure me that everything would be fine. Everything was not fine.

After two lumpectomies that removed not only the tumor but a significant amount of breast tissue surrounding the lump, it was determined that the cancer had not spread to the lymph nodes and chemotherapy wouldn’t be necessary. This was a significant positive in a situation where it was difficult to see anything but the negative.

Another bout of good news came regarding the radiation treatment following surgery. She was eligible for MammoSite radiation therapy, which targets a specific area of the breast from the inside, meaning a higher daily dose is given for a shorter period of time. Rather than the normal five to seven weeks, she only needed therapy twice a day for five days. She would need blood work and mammograms every three months for many years and would be on the prescription Tamoxifen for at least five years to hopefully reduce the chance of the cancer returning, but things were starting to look up.

Caught up in the surgeries and the treatments, it was difficult to look toward the future. I didn’t have a chance to stop and think about the lasting effects, and I certainly hadn’t thought about what my mom’s diagnosis meant for me personally. Or for my 2-year-old daughter, Delaney. My mom had. She knew that her developing breast cancer would increase our risk as well. I felt a sudden urge to make detailed notes of our family’s medical history out of fear that my daughter would need the information in years to come. Breast cancer is not only my mom’s battle. It’s my battle. It’s my daughter’s battle.

According to the American Cancer Society, having one first-degree relative (a mother, sister or daughter) with breast cancer doubles a woman’s risk of developing the disease. At my last gynecologist appointment, I was told that my yearly mammograms would begin at age 30—just two years from now.

My mom’s brush with breast cancer has made me more aware of my own health. You can bet I will be at my yearly appointments when my time comes, and I’ll be an advocate for yearly mammograms for the rest of my friends and family. According to the American Cancer Society, mammography usage has not increased since 2000. In 2008, only 53 percent of women aged 40 and older reported getting a mammogram in the last year. Almost all states have laws requiring insurance companies to reimburse all or part of the costs associated with mammograms, and all women age 40 and older with Medicare can get a mammogram screening each year. The numbers should be higher.

Although new to my immediate family, breast cancer has been a part of my life for many years. My aunt (my dad’s sister and my daughter’s namesake) was first diagnosed with breast cancer when I was in elementary school. She’s since battled and survived six cases of various types of cancer. I’ve walked in the American Cancer Society’s Making Strides Against Breast Cancer event several times, always keeping my aunt in my thoughts. Last year, my mom and I walked in the event less than a month after her lumpectomy. I couldn’t have been prouder of my mom’s success, not everyone is as fortunate.

At the end of this month, my mom and I will walk 60 miles over the course of three days as participants in the Susan G. Komen 3-Day for the Cure event in Tampa. It’s an event that’s about so much more than walking. It’s about surrounding yourself with people who have been impacted in one way or another by this disease. It’s about taking a step to help end breast cancer forever.

Why do I walk? I walk in honor of my mom. I walk out of respect for myself. I walk for the future of my daughter. 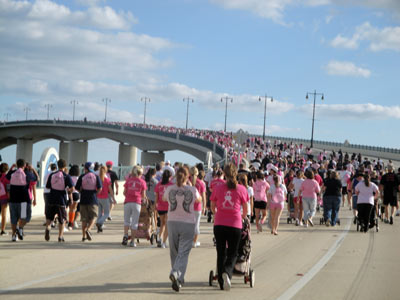 There are many support services offered throughout our community. Visit the American Cancer Society (ACS) for wigs, scarves, hats and mastectomy supplies at no cost. The following support groups meet regularly.

Look Good, Feel Good: Advice for coping with hair loss and skin changes. Meets third Monday of each month at 10am at the Marion ACS office. Other locations and times available.

Road to Recovery: Volunteer drivers transport cancer patients to treatments and appointments. Call the ACS two days in advance at (800) 227-9954.

The American Cancer Society is always looking for volunteers to help with special events, speak with others who are battling breast cancer or simply answer phones in the office. Visit cancer.org or call for more information.