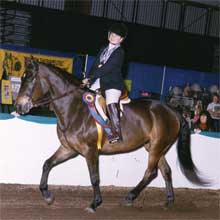 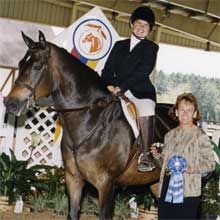 That Marion County equestrienne Kathy Gray has won two bronze medals in world competition and three consecutive national championships is remarkable in itself. But the most extraordinary fact is that she’s here at all. Twenty-five years ago, Kathy’s life was almost ended abruptly by a horse. She’s made a remarkable comeback.

The day in question was May 20, 1980. Three-year-old Kathy and her five-year-old brother, Jason, had just been dropped off from pre-school by the carpool at Hi-Time Farm, the family farm in northwest Marion County. Her dad, Wayne, was at his job in Citrus County.

Betty welcomed her children home and made their lunch. Always independent with an I-can-do-it-myself attitude, Kathy finished first and headed outdoors to play with the family dog.

Minutes later, Betty realized she couldn’t hear her daughter and walked out to find the dog alone on the porch. There was no sign of Kathy.

Panicked, Betty began searching the property. Just the week before, both Jason and Kathy had gone on a butterfly-catching expedition and ended up in the broodmare pasture. Betty had warned both children never to go into the field again.

Yet when Betty approached the fence, she saw her young daughter lying still in that very pasture. It was immediately apparent that she had been kicked in the head. Horrified, Betty gathered Kathy into her arms and ran to the house, where she called 911.

“There wasn’t a helicopter for emergency transport then,” Betty recalls. “We had a police escort from Munroe up to Shands, and that’s when I started realizing how serious this was.”

Doctors operated on Kathy immediately. Somber doctors told Wayne and Betty they had never seen a more severe head injury in a child. Kathy’s head was literally cracked like an egg. During surgery, a large portion of skull, brain matter, and injured tissue had to be removed. They gave Kathy a 50/50 survival rate, but couldn’t say what her condition would be if she lived. They did warn them that if Kathy survived, she would have paralysis, as well as physical and mental limitations.

Five days after the accident, doctors felt confident Kathy would survive, even though she was still in a coma. She remained in the Intensive Care Unit for over three weeks without regaining consciousness. At one point, Betty had to sneak her son Jason into the ICU just to show him that his little sister was still alive, since he was convinced she had died.

“We still knew when she was asleep or awake, even though she was in a coma,” says Betty. “We read and talked to her all during this time.”

Thirty days after the accident, Kathy was still semi-comatose but the doctors gave permission for the Grays to bring their daughter home, believing that she would respond better in her familiar environment.

“It was like taking a newborn baby home, even though she was three,” Betty remembers. “She gradually came out of the coma over the course of weeks and then she had to relearn everything again.”

Three months after the surgery, Kathy spoke her first word: “hi.” It was music to her parents’ ears.

“I told the therapist that she was going to walk that Christmas,” Betty says. “The therapist said I was asking for a lot and told me not to get my hopes up. But the week before Christmas, Kathy walked across the living room floor.”

Kathy’s medical therapy continued for years, but less than a year after the accident she embarked on what would become perhaps her most effective therapy — riding.

“I just knew she was going to be my big show rider,” says Betty, who trained and showed Morgans across the country at the time.

Before Kathy turned four, she was back in the saddle, but it would be years before she could ride without assistance. In those early years, someone led the horse and two people walked at the horse’s sides to help steady her. Gradually, Kathy graduated to having no side walkers, and by the age of eight, she was riding independently.

Around this time, Kathy began riding regularly with Marion Therapeutic Riding Association (MTRA), founded in Ocala in 1985. The non-profit organization allows both children and adults to experience the multiple physical and psychological benefits of horseback riding and driving.

Kathy graduated from Forest High School in 1995. Just two years later, her mother who was instrumental in starting MTRA, gave up her training and showing career to become executive director for MTRA. The organization has made tremendous strides and now gives about 450 rides every month.

“Kathy is probably the best spokesperson our therapeutic riding program can have,” Betty admits. “I see miracles happening here.”

Perhaps Betty passed her “horse show genes” on to her daughter. Kathy entered her first competition at age ten, riding in local Marion Saddle Club horse shows in the special division for riders with physical, mental, and/or emotional disabilities.

Because of the paralysis on her left side, Kathy’s balance is compromised. She uses a rubberband that helps her boot stay in the stirrup. Should she fall for any reason, the band gives way so she isn’t caught in the stirrup. Kathy also uses special reins with a short bar, as well as a small brace on her thumb and a Velcro band on the fingers of her left hand.

Kathy has shown several horses through the years and is currently riding Knickee, the Morgan mare she received as a Christmas gift in 1999. Solid and steady, Knickee responds immediately to Kathy’s cues.

“I can ride English and Western, but I like English better,” says Kathy. “The riding has helped build up my strength.”

All the local showing experience paid off when Kathy competed in the 1999 World Special Olympics. Over 150 countries were represented and Kathy was thrilled to win two bronze medals.

In 2000, she entered a qualifying class at the Citrus Cup Morgan Show, open to all English walk/trot equitation riders age 12 and over with a mental or physical handicap. The top six riders qualify for the United Professional Horsemen’s Association (UPHA) Exceptional Challenge Cup National Grand Championship. The event is held every November at the prestigious American Royal Horse Show in Kansas City.

Kathy won the qualifying class in 2000 and then beat out 12 other riders from around the country to win the National Championship in Kansas City.

She has won the qualifier at Citrus Cup for four consecutive years (2000 – 2004) and will try to make it five this spring. Even more impressive, she and Knickee have traveled to Kansas City and won the National Championship three times.

Even if Kathy wins the qualifier again this year, she can’t compete in the National Championship because she has won an unprecedented three years in a row. However, she has been invited back again — all expenses paid — to give demonstrations.

Just getting to the show has been a lesson in grace. Two horse transportation companies, Salle Horse Vans and Southern Venture, have donated their services. The UPHA pays all entry and stabling fees, and local Ocala trainer Christina Schlusemeyer has graciously donated Betty and Kathy’s airline tickets to Kansas City each year.

Horses remain at the center of Kathy’s world. She rides at least twice a week at MTRA and more frequently when Knickee is home for the summer. She also volunteers at MTRA regularly and helps groom the other horses, muck the stalls, scrub the buckets, and clean the tack.

At home, Kathy helps with household duties and has her own golf cart to trundle back and forth to the barn where she is responsible for most of the farm chores. When asked her favorite things to do, Kathy doesn’t hesitate. “Be around the horses!” she grins.

Brother Jason and his wife live just across the road with their two young sons, whom Kathy watches regularly. Her eyes light up at the mention of her young nephews and she adds, “I love to baby-sit them.”

Standing just five feet tall, Kathy walks with a brace, but her somewhat awkward gait is not an issue when she’s in her favorite place — on the back of a horse. When she isn’t riding or in the barn, she likes to read. Nancy Drew mysteries are high on her list, and of course, horse stories rank the highest. She is also a big fan of crossword and find-the-word puzzles.

Although Kathy is 28, her mannerisms and infectious smile are those of a much younger girl. She is the first to say that she has a “great life” and that she is happy.

“I used to blame myself and ask why this happened,” Betty says quietly. “She was out of my sight for just minutes.”

Yet today, this mother has the advantage of seeing the bigger picture and appreciates the blessing of having her daughter alive, healthy, and able to live a satisfying life.

“The doctors tried to get me to accept that she would be in a wheelchair” Betty notes, “but I told myself she was going to have a great life.”