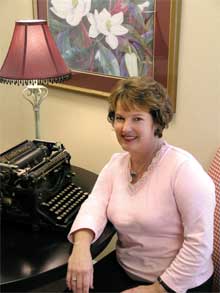 Have you ever noticed how people are drawn to before-and-after photos? No matter if it’s a room or a person that has been “made-over,” we can’t seem to resist looking at how things have changed. The proliferation of makeover shows is a testament to the popularity of seeing how homes, gardens, and even people can improve with a few tweaks here and there—and, of course, a few spare dollars.

I think reunions are the ultimate real-life makeover. Because I’ve always been so far away from the venue or because work got in the way, I have not attended very many. A couple months ago, however, I went to a college dedication and a reunion of sorority sisters, many of whom I had not seen in nearly 35 years. Once we caught up on our current lives, we giggled about funny roommate stories and sang songs that we knew way back when. For a couple of hours, we traveled back to a time when we were young and idealistic.

We came together on that beautiful spring day not solely because we were curious about each other, but also to support our alma mater in a major endeavor to expand and improve campus housing facilities. The University of Southern Mississippi has undergone a phenomenal makeover of its own since I was a student in the seventies, and I hardly recognized many of the buildings where I had spent hours laboring over class assignments. The old tennis courts were gone, replaced by new high-rise dormitories. The cafeteria was now in a state-of-the-art conference center. A friend and I rambled along the once-familiar campus paths with an unmistakable sense of pride.

The best feeling, however, was knowing that many of these changes came about because of alumni who support the university. The idealism that we had as students still shines through because we know that with each passing year, the place will only get better—just as we knew it would when we first trav-eled those familiar campus paths such a seemingly short time ago.

It’s in that same spirit of making things better for future students that a group of Leesburg High School alumni want to turn their 35th high school reunion into more than just a chance to see how for-mer classmates turned out. Alumna Jackie Johnson called me a few days before I was leaving to at-tend my own reunion. She wanted to spread the word that Leesburg High needed a few things, like a long-overdue facelift for the auditorium and much-needed office equipment, and the Class of 1973 in-tended to raise funds during a reunion this summer. It seems the spirit and idealism of the seventies are alive and well in Leesburg, too.

The school is used by many Leesburg organizations, and Jackie hopes that folks in the community will help with in-kind donations. Reunion organizers hope to have a silent auction with proceeds going toward a well-deserved makeover for the school’s auditorium. For more information, call Jackie John-son at (352) 408-2184.

As summer arrives, many of you are probably trying to decide whether or not to attend a reunion of some sort. If it’s not high school or college, maybe it’s family or a group of once-inseparable friends. Whatever the occasion, just think of reunions as real-life makeovers where we get to see how well we all weathered life’s storms. And if we’re lucky, maybe someone is stepping up to the plate, like Jackie Johnson, to make things better for those who will follow.

Mary Ann DeSantis
is the associate editor
of Lake & Sumter Style
and lives in The Villages.