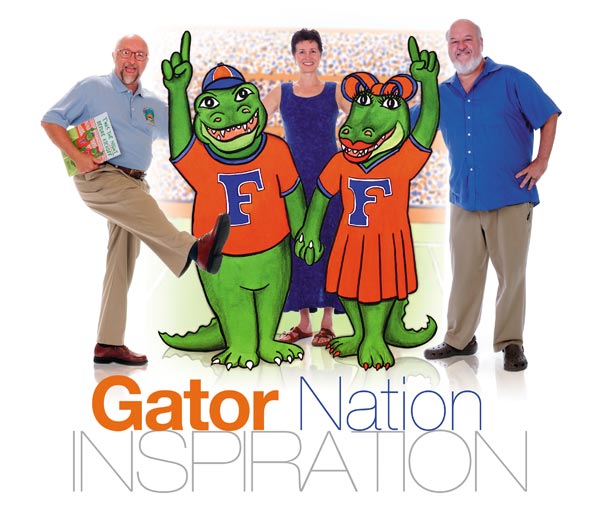 Call it sweat equity, infused with a good dose of Florida Gators orange and blue. That’s what inspired Forest High School teacher Mark Damohn one typical summer afternoon as he ran on the treadmill.

“I was thinking how miserably hot it was and how happy I would be when the cooler fall weather arrived,” recalls Damohn, who teaches American history and is known as “Dr. D” by his students. “Of course, being a lifelong Gator fan, fall means football season and going to the games. From there, my mind wandered to the holiday season. That got me thinking about our family tradition of reading ‘Twas the Night Before Christmas. That’s when inspiration struck.”

‘Twas the night before kickoff and all through the Swamp, all the Gators were ready, ready to stomp. Florida Field was manicured with care, knowing that another victim would soon be there.

By the time Damohn was done with his workout, he had composed the text for what would become ‘TwasThe Night Before Kickoff, an elementary and middle school children’s book featuring Florida Gators mascots Albert and Alberta. Damohn’s words are brought to life by accomplished multimedia artist Gene Hotaling. As creative good fortune would have it, Damohn and Hotaling have been friends and colleagues for more than a decade. Just down the hallway from Damohn’s classroom at Forest High, Hotaling teaches television production. 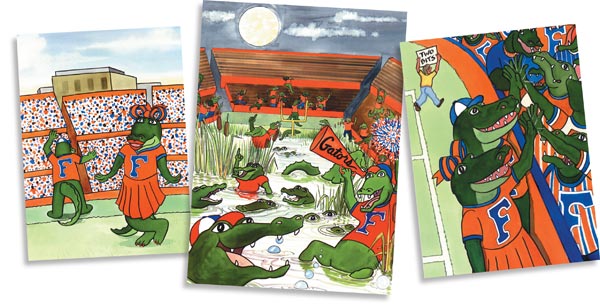 Hotaling’s illustrations are whimsical, awash in bright, bold colors and dominated, of course, by green Gators and their fans decked out in blue and orange. UF mascots Albert and Alberta dream of cheering on the Gators as they dispense of one Southeastern Conference foe after another, then claim bowl and national championships.

For Damohn and Hotaling, the creative process took 18 months to yield a book. The first step was getting legal permission from the University of Florida Licensing Department and Collegiate Products. Once that was done, the duo set about bringing the project to life between book covers.

“We spent many hours sitting in my backyard brainstorming,” says Hotaling, who received his master’s in fine arts at UF. “Mark often already had a concept of the images he wanted to go with the text and we would go from there. First, we did an ink-sketch storybook. Then I’d do the blackline masters before putting in the colors. It was a lot of work, but a lot of fun.”

At that point, Michele Badanek (middle) stepped in to digitize the images, which were then sent to Virginia-based Mascot Books. Coincidently, Damohn and Badanek, who does photo restorations, had met years before at a camera store.

“I happened to be at Cameo’s at the same time as Michele and we struck up a conversation,” says Damohn. “When she told me about her computer photo restorations, we worked together on some visual teaching products for many years. When Gene and I started working on the Gator book, I knew just who to go to for our digital work. As it’s turned out, Gene, Michele, and I make a great team.”

Powered by Damohn’s entrepreneurial mind, the team now has many projects in the works. In addition to the book that was released this year, they’ve created Albert and Alberta’s Activity Book, a combination coloring and puzzle book also aimed at elementary and middle school children—not that anyone would be surprised if more than a few adult Gator fans tried their hand at some of the mazes. For all ages, there is the 2010 Gator Sports Calendar that goes beyond just football to showcase all UF sports, as well as Gator greeting cards, postcards, and posters. All of the auxiliary items are produced here in Ocala at Sorrels Printing and Graphics. 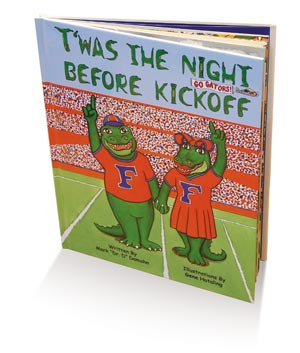 With its first run of 5,000 books sold out, ‘Twas The Night Before Kickoff is now in its second printing. And as it turns out, that book is just the first in what Damohn envisions as a series.

“I have story ideas planned out through 2020,” says Damohn. “The next book will be out in the summer of 2010. It’s the first in the biography of Albert and Alberta. It’s called Albert andAlberta’s Journey To The Swamp and coming out with it will be the Growing Up Gator Activity Book.”

For Damohn and Hotaling, the books are more than just a way to build Gator Nation. As teachers, they see them as an educational tool.

“We want the books to be good moral stories that parents and grandparents can read to children,” says Damohn. “The books are really about going to college and working hard to achieve success in the classroom and through sports. We’re just using Albert and Alberta to deliver that message.”

‘Twas The Night Before Kickoff is available at local bookstores in Ocala and Gainesville. For more on future books and to purchase all items, go to alligatordream.com or contact Mark Damohn at (352) 875-2145.