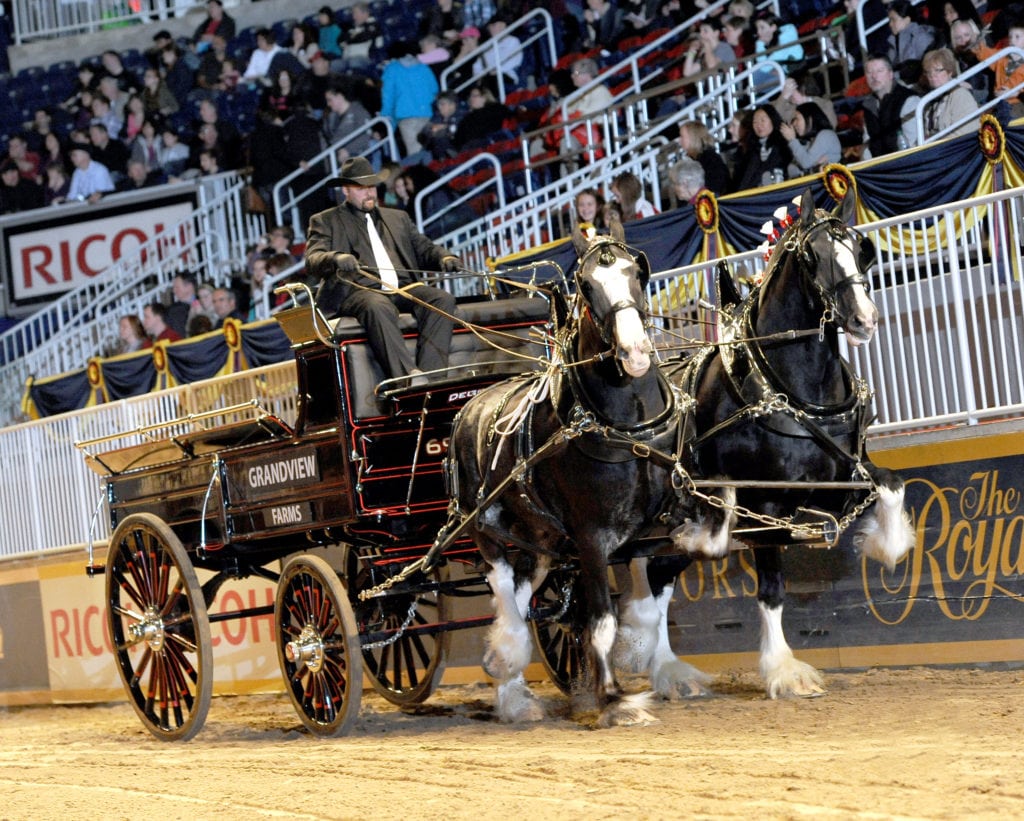 Mention Clydesdales and people immediately picture the Budweiser Clydesdales, who have become stars of some of the most popular Super Bowl commercials. Those Clydesdales are the traditional bay color with black manes and tails. They also have four white socks to the knees and hocks with attention-grabbing white facial blazes.

What most people don’t know is that Clydesdales come in many other colors, including chestnut, brown, roan and, yes, even black. The latter color, which comprises only 10 percent of Clydesdales, is the focus of Dunnellon-based Grandview Clydesdales.

The Cobbs, who were inducted into the Clydesdale Breeders of the USA Hall of Fame in April, breed and raise black Clydesdales on their 26-acre farm, where they have three stallions, a dozen broodmares and their offspring, as well as show horses. The farm hosts several draft educational clinics a year and gives private driving lessons. The Cobbs are also hay farmers, growing alfalfa and timothy.

“Our horses get free-choice timothy hay to supplement their grain,” says Karen. “All horses are high maintenance, but horses the size of Clydesdales, 1,600-2,400 pounds, really are. It definitely helps to have your own hay supply.”

Despite their size, Karen says, “Clydesdales truly are gentle giants. They have great dispositions; they are very laid back, have a lot of personality and are easy to train.”

From July through early November, the Cobbs are on the show circuit road. They show in cart class (one horse), team class (wagon), unicorn class (2 horses in back with 1 in the front), 4-horse hitch, six-horse hitch and eight-horse hitch. They generally compete in 12 shows a year, including in Canada, in the Midwest and on the East Coast. The Grandview Clydesdales have won many titles, including at the World Clydesdale Show, which is held every four years, and at the annual North American Six-Horse Hitch Classic Series. Shannon Cobb was elected president of the Clydesdale Breeders of the USA association in April.

“There are no major draft horse shows in Florida, so we decided to do something about that and created the Grand Invitational International,” says Karen. “Our very first show will be February 1-3, 2019, at the Florida Horse Park. Our goal is for the show to become a major annual event here in Ocala so everyone can come out to enjoy Clydesdales.”