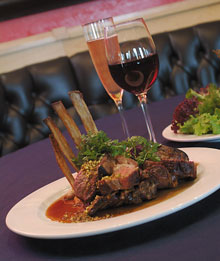 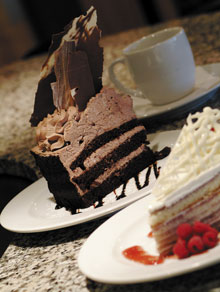 Once upon a time — ten years ago to be exact — a quaint gourmet coffee house got its start in the historic town of Micanopy.

The husband-wife team of Nancy Oscarson and Russell Baum left the hustle-bustle of Miami behind to start their restaurant business in a location that was decidedly not big city. With its expansive coffee specialty drinks and an ever-changing menu of fresh, seasonal offerings, Mildred’s was a successful venture that quickly developed a faithful following.

Five years later, Mildred’s, (the name hails from the 1940s Joan Crawford movie, Mildred Pierce), relocated to Gainesville and evolved into Mildred’s Big City Food. Dining at Mildred’s now requires more of a foray into Alachua County, but the culinary rewards are definitely worth the extra driving time, as Mildred’s continues to mature in a most desirable fashion.

Open for lunch and dinner, Mildred’s also has a “cousin,” the neighboring New Deal Café right next door that has the same owners, but offers a different menu of starters, flatbreads, salads, burgers, one-dish entrees, and paninis. The décor at the New Deal Café is modern and more casual than Mildred’s.

The atmosphere at Mildred’s is decidedly cosmopolitan, a bit “big city,” like the name, but also soothing. The east wall is a rich brick red, while the other walls in the dining area are a textured, caramel color. Comfortably padded seating runs the length of two walls in the intimate dining room, and the lighting is indirect and flattering. No harsh, glaring overhead lights here. With the graceful draperies suspended from the ceiling, subdued lighting, and warming earth tones, the room has a sultry, metropolitan feel. One feels immediately relaxed and at ease. Prompt and attentive service by a skilled wait staff adds to the dining experience.

After Mildred’s settled in Gainesville in the late 1990s, the restaurant’s executive chef, Bert Gill, became a part owner, along with Nancy and Russell.

Originally from Winter Haven, Chef Bert studied at the New England Culinary Institute, a highly respected and challenging program from which only 30% of students graduate. Bert went on to a chef’s position at the renowned Pillar House in Massachusetts, but after several years found he longed to return home to the South.

New England’s loss is clearly Florida’s gain. In addition to his obvious talent and respected culinary background, Bert brings both enthusiasm and passion to his position as executive chef at Mildred’s. (In his spare time, Chef Bert appears every Friday evening on TV-20’s 5:30pm news show, where he does a cooking demonstration using local foods. He has already done over 70 shows; recipes appear on the TV-20 website.)

“The average vegetable travels 1,500 miles to get on your plate,” says Chef Bert. It’s comforting to know that none of those exhausted, well-traveled veggies will ever find their way to Mildred’s, where the majority of produce comes straight from local farmers.

“We have such great farms here and it feels good to know the dollars you spend are ‘community dollars’ that stay in this region,” he notes. “We hope to see more businesses make an effort to buy locally.”

Of course, all of this wouldn’t amount to anything more than lofty aspirations if the proof weren’t so delectably evident in each dish that comes out of the kitchen. The overwhelming freshness of the ingredients makes every appetizer, every salad, and every entrée as savory as they can possibly be.

The menu at Mildred’s never stays the same. Because management has chosen to focus on organic and regional foods, the menu changes with the seasons.

“Up to 70% of our menu is locally produced. The produce we use comes out of the ground the morning I get it,” explains Chef Bert, who is a strong supporter of sustainable agriculture. “Our menu is very different in the summer than in the winter. That’s fun and keeps it interesting.”

Let’s consider the appetizers. If the Seared Tuna with Saffron and Capers is on the day’s menu, do not hesitate. Served on crunchy crostini, this remarkable starter delivers an exotic and perfect combination of tastes. The Blue Crab Cakes with Beurre Blanc sauce are practically pure crab, no boring breading to mask the taste. The Stuffed Shiitake Mushroom with Goat Cheese is lightly fried and delicately seasoned, and the Smoked Quail should be an entrée. This succulent appetizer is sweet and smoky in the same mouthful, a sensual mingling of flavors. On the night we dined, the quail was served with an intriguing dark purple cauliflower, cooked just enough, but not too much.

You’ll never find plain iceberg lettuce masquerading as a “salad” at Mildred’s. Instead, crisp, from-the-garden greens and tender lettuces grace salad choices that may include Maytag Bleu and Spiced Pecans on Field Greens, or Warm Spinach Salad with Crispy Chicken Livers, among other options.

If you lean towards indecisiveness, choosing an entrée at Mildred’s may prove challenging. Steak, fish, and duck are always on the menu, but are interpreted differently from day to day. Chef Bert buys only whole fish and then fillets them himself. The Gulf of Mexico Black Grouper was phenomenal — firm and expertly seasoned to enhance, not disguise, the fresh flavor. One of the only entrees not from a local farmer or fisherman was the Seared Maine Scallops dish. Flown in fresh and with no chemicals added, these were the most tender, flavorful scallops I’ve ever tasted. The fact that they were served nestled on a bed of saucy grits unlike any grandma ever made was an added bonus.

The Crispy Lamb Shank was just that — amazingly crispy on the outside, but incredibly tender and moist inside. The Grilled Rabbit Paillard was flavorful and beautifully presented. Black Angus Strip Steak, Stuffed Veal Breast, Grilled Pork Loin with Apple and Walnut, and Seared Duck Breast with Confit of Leg Strudel were also available on the night we dined.

Since the vegetables and sides change with the seasons and availability, you are in for a treat. The sides on the night of our visit included Grilled Slices of Sweet Potato with a Fabulous Cilantro Pesto, Crispy Fried Wedges of Polenta, Israeli Couscous, Organic Tomatoes, Braised Root Vegetables, Baby Fennel, Tender Kale, and Vanilla Whipped Sweet Potatoes.

If you need assistance pairing the various courses with the right wines, Mildred’s knowledgeable servers will come to your rescue. From appetizer through dessert, our server quickly discerned our individual tastes and suggested libations that were ideal accompaniments to each dish.

“Wine with the right food creates a third entity,” notes Russell. The establishment has been honored with a Wine Spectator Award and manager Ryan Todd has done a masterful job compiling the restaurant’s extensive wine list. Mildred’s is the biggest wine buyer in a large area of the state. For patrons, this translates into good value as well as an outstanding choice in vintages.

Ever since the earliest days in Micanopy, Mildred’s has had a reputation for its fabulous desserts, and I’m relieved to report this is still the case. A French baker comes in daily to create the luscious desserts that change frequently. On the night of our visit we indulged in the Chocolate Truffle Mousse Torte, an enormous slice of melt-in-your-mouth chocolate decadence. We also sampled the extraordinarily rich Bittersweet Ganache Cone, a truly beautiful creation of pure, unadulterated chocolate. Chocolate lovers will find even more choices, such as Chocolate Raspberry Torte, Chocolate Turtle Torte and the enticingly named Chocolate Fudge Corruption.

Dessert was made even better by the addition of large cups of steaming cappuccino, topped by a perfect froth. Coffee has long been a dominant force at Mildred’s. In fact, Russell informs us, the restaurant sells 4,000 pounds of coffee a year!

By the end of the evening, we decided that the only thing that could possibly have made our evening any better would have been for our server, the charmingly handsome and most gracious Cyrille, to have joined us for dinner. Alas, he had to work. Perhaps another time!

(Be sure to inquire about the Wine Dinners and Cooking Classes, both of which are offered several times a year with Chef Bert at the helm.)