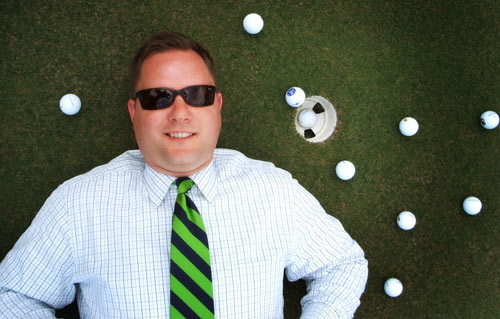 The Ocala/Marion County area is home to 4,582 hotel rooms and 21 golf courses. Now, let’s play a game of community Trivial Pursuit. How are these two statistics connected?

Stumped and need to make one of those game show lifeline phone calls? Make sure it’s to Matt Dunn.

As tourist development manager for the Ocala/Marion County Visitors & Convention Bureau, Dunn has that answer and many more when it comes to all things tourism. Just for the record, the connection between these two seemingly unrelated elements is the two percent tourist development tax. Commonly known as the bed tax, it’s collected on all hotel rooms to fund tourism marketing for Ocala/Marion County. The current annual VCB budget is $850,000.

“Tourism marketing is about bringing people into the area who will spend money that wouldn’t otherwise be spent here,” says Dunn, who heads the VCB’s sports commission. “Our focus is to bring groups, conventions, and sports events into the area to spend at least one night in our local hotels. It’s a way to create direct visitor spending that then contributes to the area’s economic development.”

A prime example of effective sports tourism marketing is the National Golf Association’s Hooters Tour/Ocala/Marion County Sports Commission Classic this past March at Golden Hills Golf & Turf Club. According to Dunn, that event alone brought in an estimated $500,000 in direct visitor spending and was definitely a coup in promoting our area as an athletic mecca of sorts.

“We have the sports facilities to host a wide variety of events,” says Dunn, 35, who has been involved in sports tourism for 14 years, including his nearly two years now in Ocala. “Our other assets are a great centralized location in the state and our affordability. It’s all about marketing the area as a sports event destination on a national level.”

Dunn, who grew up in Gainesville, is more than qualified to do just that. An All-Americanswimmer at Florida State University, he interned with the Tallahassee Visitors & Convention Bureau’s Sports Commission while still in college. After graduating with a master’s in athletic administration, Dunn put in stints with the Gainesville Sports Commission and Orlando-based Florida Citrus Sports. In addition, his contract consulting clients over the years have included ESPN, the Professional Golf Association, USA Swimming, and the Florida High School Athletic Association. He recently received accreditation by the National Association of Sports Commissions as a Certified Sports Event Executive.

“We’re delighted to have Matt on our staff,” says Ann Sternal, Ocala/Marion County VCB executive director. “He has a vast knowledge of sports and sports tourism. We feel very optimistic that we’re going to be able to continue drawing more sporting events to the area.”

Dunn’s position requires him to be equal parts salesman, juggler, and negotiator. Command central is a second-story office in a Victorian house in Ocala’s historic district. Of course there’s not much downtime to enjoy the room with a view. Much of Dunn’s time is spent out of the office, showing off the area’s hotel accommodations and sports facilities to prospective visitors. Conference calls occur as much in his car as in his office. Dunn attributes his ability to remain calm amid the chaos to his career as an elite, competitive swimmer, where handling stress was necessary to perform and win.

“I can be working on as many as a dozen projects at once,” says Dunn, pointing to the long row of stacked project reports lined up on the floor by his desk. “It’s a matter of building relationships and staying in contact, whether by phone, e-mail, or face-to-face meetings. My job involves a lot of negotiating and trying to sell someone on Ocala.”

The sports can range from golf and baseball to soccer, softball, and equine events. Dunn’s favorites, though, include youth sports events, which create a large economic impact thanks to the family support tied to them.

“Youth sports are a proven success as sports tourism,” says Dunn. “They are very good for an area’s economy. Not only do they bring in the teams, they bring in the families and friends of the players and coaches. That’s a lot of booked hotel rooms and that economic impact spreads out to other community businesses.”

For Dunn, sports event negotiations can take anywhere from days to years, but some will happen much faster. The Hooters Tour golf tournament is a prime example of a nearly spontaneous deal.

“I heard the golf course that had hosted the Hooters Tour golf tournament before was in bankruptcy trouble,” recalls Dunn. “I quickly made contact with the National Golf Association, brought in three of our local golf courses for bids, and within three days of intense negotiations, we were able to land the tournament.”

This summer Ocala will play host to multiple Cal Ripken youth baseball tournaments at the Ocala Rotary Sportsplex, Ocala Highlands, and Wrigley Fields. The economic impact is estimated at $1.5 million in tourist dollars.

“We collaborated with Marion County Parks and Recreation and the parent group of the Ocala Rotary Sportsplex,” says Dunn. “In less than a week, we helped them secure the tournament.”

For Dunn, the future looks bright for the area’s sports tourism.

“In 2009, we had 30 sports events,” he says. “This year, we had 39 already lined up through April alone. The great thing about sports tourism is that it touches every aspect of the community. That’s a good thing for everyone.”