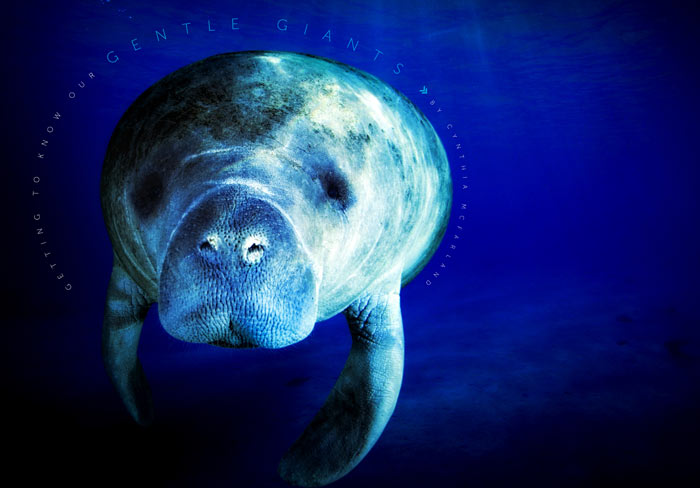 From November through March, King’s Bay and the waterways of Crystal River boast the world’s largest concentration of manatees in a natural, spring-fed environment. With more than 30 artesian water springs, the area is home to hundreds of manatees throughout the winter months.

The beauty of living in Marion County is that we have the opportunity to experience the manatees during their “wintering in.” While I was thrilled with the chance to swim with the manatees, the more I learn about the stress these animals endure simply trying to survive the winter, the more I have to acknowledge that contact with humans isn’t always a positive thing for them.

Some experts maintain that we shouldn’t interact with manatees in the water, while others allow that it’s acceptable but only if contact is strictly left up to the manatee. After my own up close and personal interactions—in the water and via kayak—I must admit both approaches have merit. Either way, meeting these magnificent creatures “on their own turf” is something I will never forget.

“OK, you can get in the water now, but move slowly. No splashing!”

Even wearing a wetsuit, the water temperature makes me gasp for a second as I make my way carefully down the boat’s ladder. I adjust my mask and snorkel and float quietly a short distance from the boat. I gaze in awe at the amazing creature less than 20 feet away.

I recall the captain’s instructions as I float easily in the sun-dappled water, grateful for the buoyancy of my wetsuit.

Slowly, gracefully, a half-ton West Indian Manatee moves in my general direction. Her enormous back has a light coating of greenish algae, and I can clearly see the slash marks of several old scars that were obviously made by a boat’s propeller. Her gray front flippers have small, distinctive circular “nails” around the edges, a characteristic that makes her instantly identifiable to her nearest land relative: the elephant.

“If a manatee approaches you, you can touch it lightly using one hand only.”

I find myself holding my breath as she comes closer and then, remarkably, rolls over. I place my hand lightly on her broad side as she drifts past. She feels like firm, rubbery velvet. Graceful, despite her massive size, the manatee swims around until she’s facing me. Her small dark eyes appear to be focused on mine. I’m overwhelmed by a sense of gratitude that this wild creature is honoring me with her presence.

With the arrival of the manatees every fall, tourists and locals alike find themselves hoping for an encounter with one of these incredible endangered mammals. Guides and tour operators maintain a steady business, and their knowledge and experience offer some of the surest ways to get up close to the manatees, while not harassing these massive, gentle giants.

Bird’s Underwater, Inc., the tour operator I ventured out with, has been taking guests to swim with manatees for 20 years. Owners Bill and Diane Bird still guide tours and get in the water with patrons on a daily basis. The Birds also shoot underwater video of manatees as they interact with guests, a one-of-a-kind reminder of an amazing experience.

Tours typically use pontoon boats, and depending on the size of the boat, there may be only a few people on board, or as many as two dozen. After the exhilarating experience of swimming with the manatees in the brisk 72 degree water, you’re sure to have some goosebumps. Back on board, you can slip out of your wetsuit and into the warm sweatsuit you brought along.

If, for any reason, you don’t feel like getting wet, you can always observe from the deck of the boat. The clear water affords a great view of manatees swimming near the surface.

“It’s always magical, even though I’ve been doing this for 20 years,”admits Julie Wolf of Florida Manatee Tours. The family-owned business, which Julie operates with husband Kenneth and son Wayne, is located at the marina at the Days Inn Hotel in Crystal River.

“We guarantee that you will see manatees, but we cannot force them to swim with you. It has to be up to the manatee to come up to you,” Julie explains. “We take you to where the manatees are, and our staff gets in the water with you. If a manatee comes up to you, you can reach out with one hand to touch it. If you put two hands on a manatee, that’s considered ‘riding’ and isn’t allowed. If the manatee swims away, you can’t follow it; that’s called ‘chasing.’ Our staff reinforces these rules on the trip,” she adds.

Bird’s Underwater and Florida Manatee Tours are just two long-standing Crystal River tour operations that are part of the Manatee Eco-Tourism Association (M.E.T.A.), a group of Citrus County tour companies dedicated to conducting human/manatee interaction in a “safe, non-stressful and considerate manner.” Members of M.E.T.A. follow U.S. Fish and Wildlife Service regulations and adhere to a list of guidelines when it comes to swimming around manatees. To verify that you’re going out with a reputable company, check their website or ask whether they’re part of this organization.

A responsible tour operator emphasizes “passive interaction” with manatees. Beware of any tour guide that promises you will get to pet a manatee. The outing should be an eduational experience, not a “theme park-style” adventure.

“There are some environmental groups that want to end swimming with the manatees,” notes Rhonda Banker of Bird’s Underwater. “Yes, this is a business, but most of us are in love with the manatees. If we all work together, we can keep the tours going if everyone does it the right way.”

“We‘re trying to find that balance to allow people to interact with manatees, while at the same time making sure the manatees are protected and safe,” notes Michael Lusk, refuge manager of the Crystal River National Wildlife Refuge, which was established in 1983 specifically to help protect the West Indian Manatee. “As a national wildlife refuge, we are directed by Congress to allow for wildlife observation and photography, as long as it does not hurt or endanger the animals we’re there to protect.

“Our goal is to allow the opportunity to interact, so long as it doesn’t harm the manatees, either individually or as a population,” he adds. “I believe getting people in the water with manatees has enormous conservation value. Interacting with them makes people understand why it’s so important to protect them and the water quality on which they depend.” 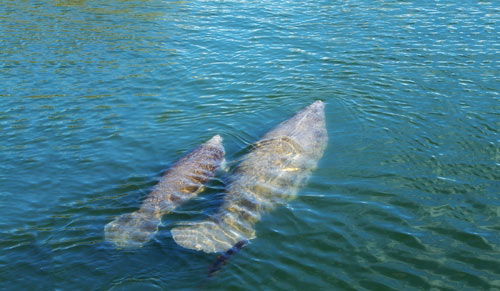 “There’s no other marine mammalthat people are encouraged to get close to in the water,” notes Dr. Katie Tripp, director of science and conservation for the Save the Manatee Club in Maitland. “People need to understand it’s a privilege to do this. It’s not a petting zoo; these are wild animals. The more you just let them ‘be manatees’ and observe, the more you will learn about them in their natural habitat,” she says. “The first rule of eco-tourism is that you don’t make promises with wild animals. You let the animals be in charge of any interaction. If a captain doesn’t abide by the rules or make his customers abide by them, this privilege we have in Crystal River could disappear.”

Despite their size, manatees actually have a very thin layer of blubber compared to a whale or dolphin and cannot tolerate temperatures below 68 degrees.

“Manatees are very temperature sensitive,” says Dr. Tripp. “We saw unprecedented cold mortality rates the last two years. In 2010, there were 281 confirmed cold stress manatee deaths. Based on the number of unrecovered carcasses and carcasses for which a cause of death could not be determined, which were recovered during this prolonged cold spell, and in areas where other cold-related deaths were occurring, the number of manatees killed from cold during 2010 could approach 400. In 2011, there have been 108 cold-related manatee deaths.”

Manatees make their way into the Crystal River area each winter, searching for warmer water. The enormous vegetarians eat 100 pounds or more of vegetation each day, and digestion is a crucial way for them to stay warm.

“If a manatee gets flustered enough with people that it leaves the spring, it can be a life-or-death decision,” says Dr. Tripp. “The manatees are in these areas for survival, and they need to conserve their energy. People often think if they’re not leaving people, it’s because they’re accepting, but they’re really just trying to find a way to rest.”

Not everyone believes in swimming with the manatees. Lars Andersen, a naturalist and professional river guide with High Springs-based Adventure Outpost, is one of them.

“We don’t feel it’s in the manatees’ best interest to have people in the water with them. It alters their behavior, and a lot of manatees are timid of people,” says Lars, a Florida native who has been exploring Florida waterways for three decades.

“It’s a tough case to make because people love to swim with them, and it’s a fun thing, no question about it. Probably the biggest argument people make for swimming with them is that it’s educational. This holds a little bit of water, but really, the right environmental lesson is that you don’t interact with an endangered species. You don’t have to interact with animals to want to protect them. A lot of people have never touched a bald eagle or a whale, but they’re still passionate about saving them.”

I had the memorable experience of going on a manatee kayak tour in Crystal River with Lars. On the nearly four-hour expedition, we saw many manatees. To my horror, I also saw people disturbing them numerous times.

“Every time I take a kayak tour there, we see people grab manatees, chase them, ride them and do everything you’re not allowed to do legally and shouldn’t do ethically,” says Lars with dismay. “It puts stress on an endangered species. They need to be able to move as little as possible and do whatever they need to do to survive the winter. Just conserving energy is important.”

Gliding along in a kayak, mere inches above the water’s surface, affords a great view of the manatees. In addition to multiple up-close-and-personal manatee sightings, we were treated to the thrill of bottlenose dophins swimming close to our kayaks as we paddled across King’s Bay. Several different times, manatees surfaced so close to my kayak that I could have reached out to touch them. But I chose not to.

Instead, I committed those moments to memory and hoped that the next time I venture out into these crsytalline waters, those amazing animals will once again grace me with their quiet, peaceful presence.

To learn more about protecting manatees, contact one of the following organizations.

Save the Manatee Club

To locate Crystal River area companies, visit the Citrus County Chamber of Commerce at citruscounty.com. Click on “Visit Citrus County,” and then click on “Sports & Recreation.”