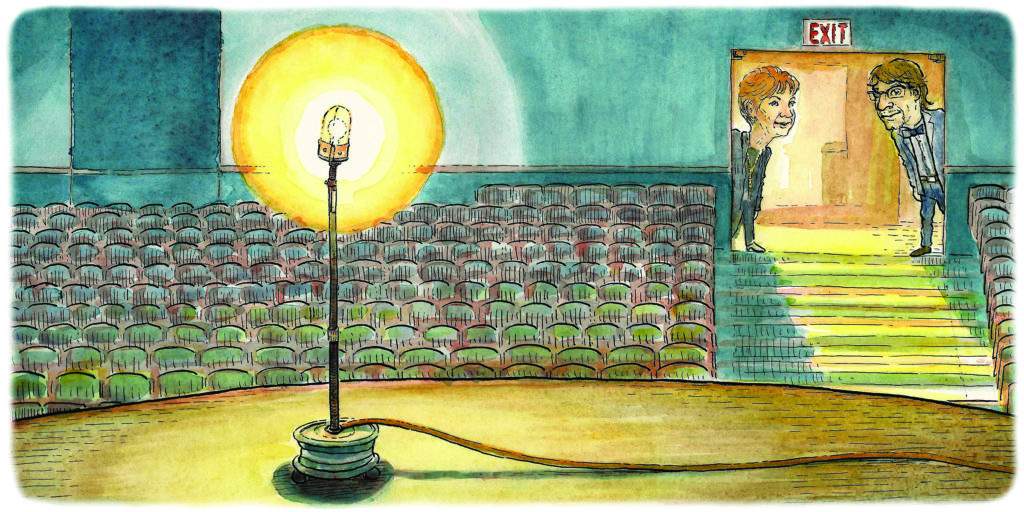 My acclaimed career at Ocala Civic Theatre (OCT) started in 1979 as chorus kid No. 6 in The Music Man and ended in 2015 with a bone-breaking fall off a gingerbread house during The Nutcracker.

In the latter show, I was wearing a dress and holding a giant cupcake. Long story.

In between, I played a tiny sailor, a hyper dogcatcher and a cross-dressing German saxophonist.

I have seen a lot with Ocala’s storied 70-year-old theater group—tears, blood, laughter, my first bare boob—but never did I know the formal name of the crude-looking lamp anchored into a wheel rim. I walked by it hundreds of times backstage and even hung costumes in its glow.

Its significance eluded me until September, when the lamp was ceremoniously carried off stage amid a smattering of “See ya, sucker!” applause.

In theater, the ghost light is a single bulb left burning whenever a theater is dark—nothing on stage, no one in the audience.

At OCT, the six-month, pandemic-fueled darkness ended with the recent opening of Pump Boys and Dinettes, a musical about grease monkeys, gas and girls.

“I am so delighted to welcome you to opening night of our 70th season against impossible odds,” OCT Artistic Director Katrina Ploof told the crowd. She spoke while standing next to the illuminated ghost light.

It was a sweet moment with a socially distanced audience and, as such, many empty seats. Then a crew member carried the ghost light off the stage. The theater was no longer dark. On with the show. Chills.

It was an emotional wallop not felt since the return of toilet paper in early summer.

It was a sign of hope in a place I deeply care about, a place with so much Ocala history, so much of my history.

My mother was the box office manager there for years. She and my stepfather played a big part in moving the theater from a ghost-infested, now-demolished building to what codgers like me still call the “new theater” (we’ve been there a scant 32 years).

While I am no longer on stage (you’re welcome), I am an OCT board member. Thus, I know the struggles, emotion, math and diplomacy it took to extinguish that ghost light.

This pandemic is not done with us yet, but businesses and artists in Ocala have plotted careful strategies to bring back what makes us happy.

Days before that opening night, a friend called me with a request: Can you write about, well, just being nice to each other? The toxic mix of pandemic and political polarization was simply too much for her.

I chose to write about the theater, as arts in Ocala make all of us happy. I dare say, the arts could be the key to returning to “nice.” Get off Facebook, turn off the news, take a breath (six feet away, please) and soak in the returning tide of local visual and performing arts.

Good stuff is back, friends. Savor it. Smile. And be nice, dammit! Don’t make me get my giant cupcake!