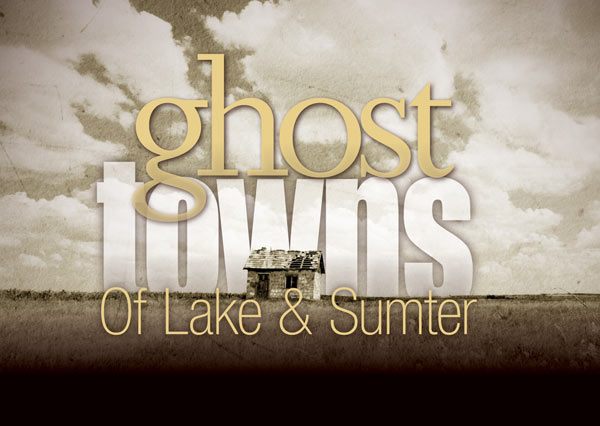 When most people think of a ghost town, they conjure up an image of a dusty group of dilapidated wooden buildings in the Old West. Tumbleweeds roll down the street. Hinged doors of a saloon flap noisily in the wind. Broken windows, empty wooden sidewalks, and perhaps a drifter on horseback passing through complete what Hollywood has led us to believe is a ghost town. Although such an abandoned area would certainly fit anyone’s definition, many other scenarios also qualify (see sidebar).

But whatever the criteria for identifying these towns, Florida has hundreds or thousands of examples, fascinating remnants of our not-too-distant past for those who strive to imagine what used to be. Here are 10 of our favorites. 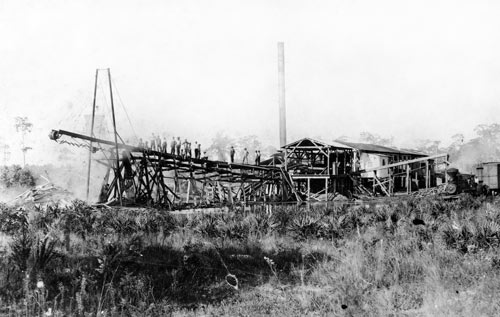 The town of Bamboo in Sumter County was founded in 1883 by B. E. Chapman of South Carolina. It had its own post office from 1884 until 1890, when it moved to Orange Home. After the Big Freeze of 1894-95, Bamboo’s population decreased to 30, but it really transformed from a thriving town to a ghost town after its sawmill and post office closed down. Depicted in this photo is the Goethe sawmill that operated there, not far from the intersection of today’s SR 44 and CR 468. 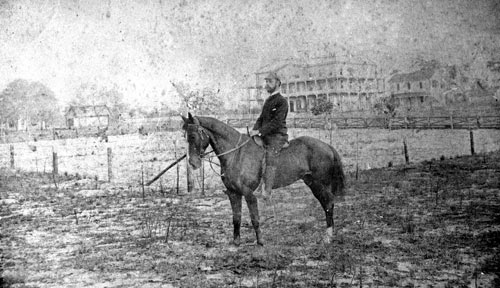 In 1884, wealthy English settlers founded the Lake County town of Conant, naming it for Florida Southern Railway financier Major Sherman Conant. It was located around where The Villages is today and included the three-story hotel shown in this photo from 1884. The residents of Conant were looked upon by others as snooty and above physical labor. This citrus-growing area was hit hard by the Big Freeze of 1894-95, which reduced its population to 100. The town was gone by 1919 when mail service moved south to Lady Lake. Ten years later, all that remained with the name Conant was a railroad sign and Conant Road, renamed Griffin Road during the 1950s. 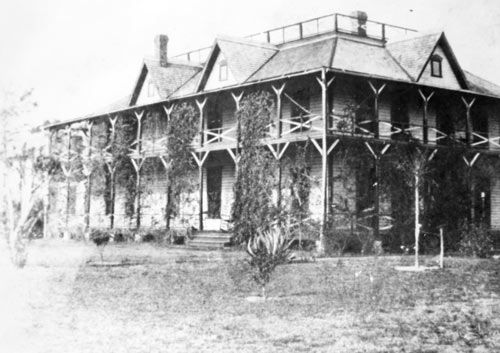 Located on a high shell bluff and originally called Old Town, St. Francis existed to serve steamboat traffic along the St. Johns River beginning in the 1880s, and opened a post office on March 15, 1888. However, the railroad from Jacksonville arrived in the region in 1886 and shifted the flow of freight away from steamboats, resulting in an economic decline for the town. Nevertheless, the newspaper Florida Facts began publication there in 1890. The post office closed on October 15, 1909, the same year the St. Francis Hotel (shown here) burned down. The townsite, located north of Crow’s Bluff in Lake County, is now part of the Ocala National Forest. 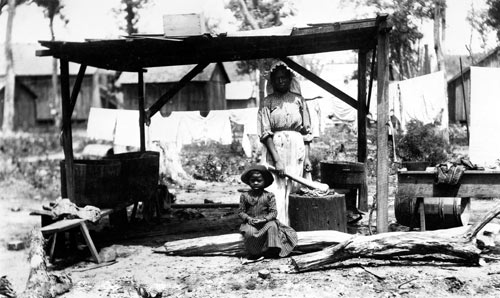 Taken around 1890, the year a post office was established, this photo shows the laundry shed at the Warnell Lumber and Veneer Company. The Sumter County company town of Warnell was hurt when the lumber company moved to Plant City in 1898. On September 10 that same year, the town’s post office closed. 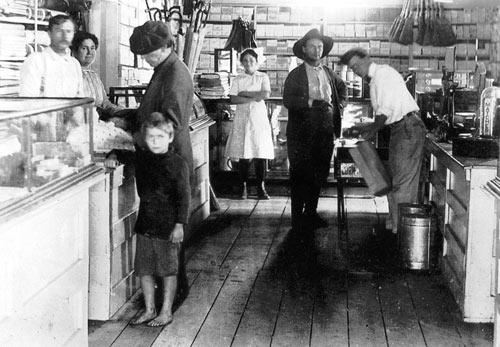 The area of Sumter County including Linden, where CR 719 crosses SR 50, was settled by George Washington Gideons from Telfair County, Georgia, who arrived in 1851. The town was named by its first postmaster, W. H. Hood, for his hometown of Linden, New Jersey, named after the linden tree. A major feature of the formerly thriving town is the Linden Cemetery. For more than a century, a popular annual event, the Linden Cemetery Picnic, has been held in the small nearby community of Mabel. George P. and Rosa Parish are shown in this photo from around 1915 behind the counter of their Linden store, which also served as the post office. 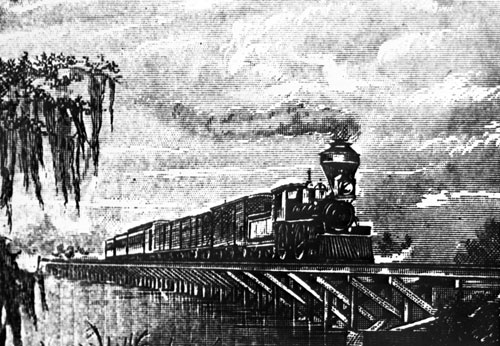 This image from around 1895 depicts a Florida Railway and Navigation Company train at Eldorado by Lake Harris in Lake County. By 1888, the railroad would take a passenger to Fort Mason and Leesburg for a fare of 15 cents. The fare was waived for families who donated land for the railroad right-of-way. Eldorado was connected to Astor by steamboat, where a passenger could also board a train of the St. Johns and Lake Eustis Railway. Eldorado’s post office, located about five miles southeast of Leesburg, operated from 1886 until 1910. The town’s name originated from the golden color of the fruit of local citrus trees. 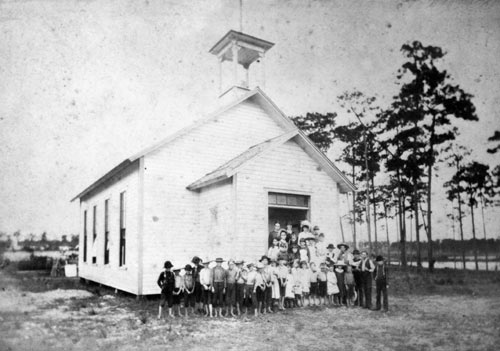 George T. Pittman moved from Kentucky to Lake County in 1883 and established a settlement near Lake Dorr, just north of Altoona. It was named Pittman and was served by the Pittman Argus newspaper. Murray Thomas owned the first store and the hotel. The town was home to a Presbyterian church, and the bank was owned by Pittman, Thomas, Robinson and Company. Pittman was located along the route of the St. Johns and Lake Eustis Railway, completed in 1881, which also included stops at Fort Mason, Umatilla, Glendale, and Altoona to the south, and Ravenswood, Summit, Sellers, Bryantsville, and Astor to the north. Pittman’s Grassy Pond School is shown here from the 1880s, well before the Big Freeze of 1894-95 that destroyed the local citrus crop and prompted most of the residents to move elsewhere. There are now farms at the former townsite located near the intersection of SR 19 and Lake Dorr Road. 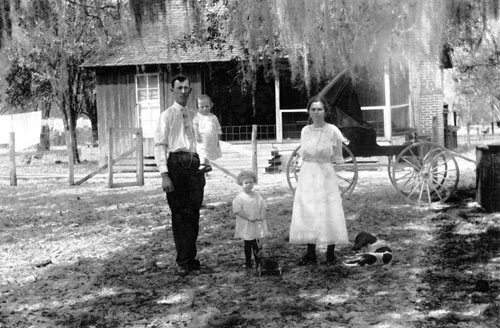 This small, rural community in Sumter County had its own post office beginning in 1894. It was named for Mabel Phelps Page, the daughter of postmaster J. P. Phelps. The post office closed and mail service was transferred to Linden in 1918. Today, there are a few rural homes and no commercial activity, despite the former town being located along a major road (SR 50, between CR 772 and CR 773). The only three signs with Mabel’s name are two green-and-white Department of Transportation signs along the road, and one painted on the pavement at the northern end of the Van Fleet Trail, a 29-mile multi-use trail stretching from Mabel to Polk City. This 1916 photo shows Scarboro Washington Stanfield, his wife, and his children in front of their Mabel home. 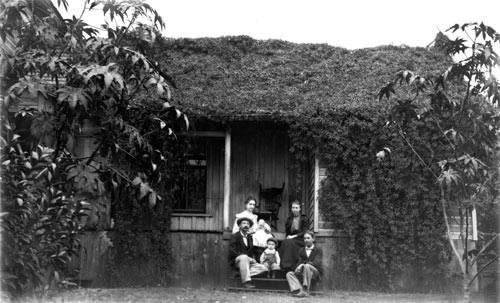 Shown here in a photo from around 1890 is the Mohawk home of Charles and Minnie Hart Stokes and their family, who moved to Florida from Lee Center, New York. They purchased their land from Mr. Palmer, who had settled there in 1882. Mohawk’s post office was located in the living room of the Stokes house. In 1887, the Orange Belt and Tavares and Gulf Railroads arrived in Mohawk. A decade later, Charles Stokes expanded his home into Jolly Palms, a hunting and fishing lodge that burned down in 1912. Located near Lake County’s Plum Lake, Mohawk had a population of only 45 in the mid-1930s and is now part of Minneola. The name is derived from the Narragansett word meaning “cannibals.” 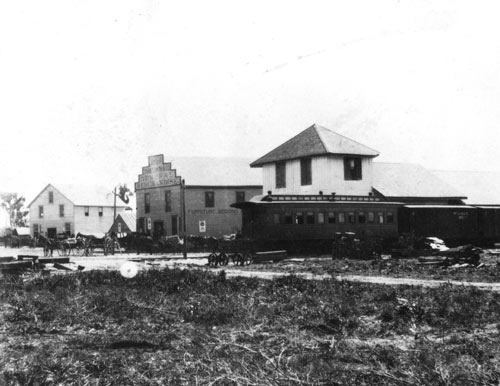 The building in the middle of this 19th century photo is the Charles Smith and Company General Merchandise store. To the right is the Fort Mason railroad depot, adjacent to tracks in use since 1880, serving the Lake County town. Located near the northeastern corner of Lake Eustis, it was named for Major Richard Barnes Mason and is now part of the city of Eustis. Fort Mason served as a shipping center, receiving citrus and other crops by rail and transferring them to lake steamers, which would take them to the Oklawaha River and points beyond.

So What Is A Ghost Town?

No, not some Halloween theme park or Wild West frontier, a true ghost town must have/had: 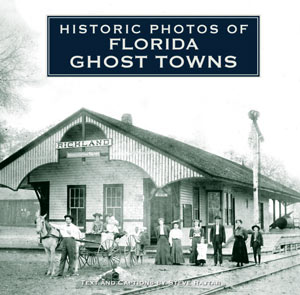