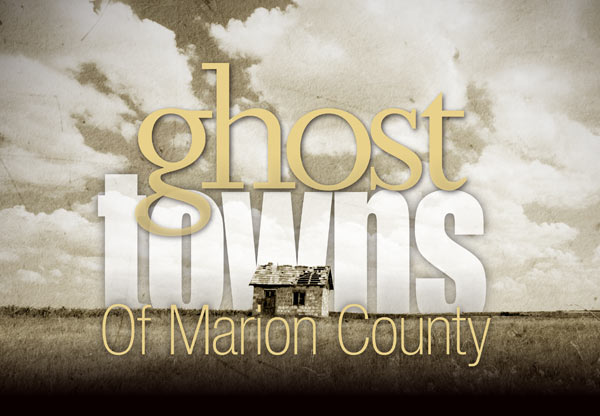 When most people think of a ghost town, they conjure up an image of a dusty group of dilapidated wooden buildings in the Old West. Tumbleweeds roll down the street. Hinged doors of a saloon flap noisily in the wind. Broken windows, empty wooden sidewalks, and perhaps a drifter on horseback passing through complete what Hollywood has led us to believe is a ghost town. Although such an abandoned area would certainly fit anyone’s definition, many other scenarios also qualify (see sidebar).

But whatever the criteria for identifying these towns, Florida has hundreds or thousands of examples, fascinating remnants of our not-too-distant past for those who strive to imagine what used to be. Here are 13 of our favorites. 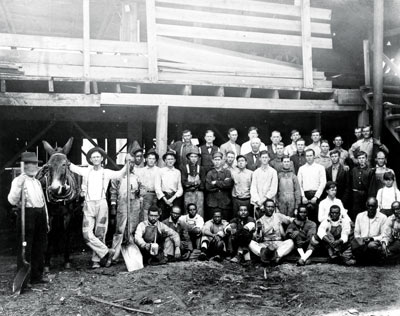 The town of Boyd was named for J. B. Boyd and had its own post office from only 1891 until 1895. It was located along the Norfolk Southern Railroad track where CR 140 (Boyd Road) crosses it just west of US 221. This photo from around 1910 shows the employees of the Weaver Loughridge Lumber Company sawmill located in Boyd. 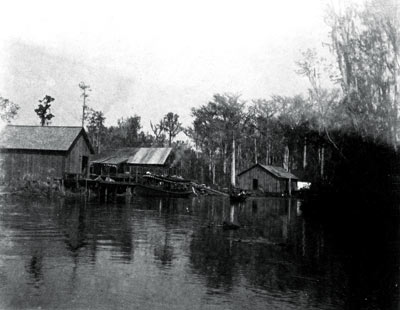 Near the Oklawaha River, along CR 316 east of Fort McCoy, was the town of Eureka, from the Greek term meaning “I have found it.” Its post office operated from 1873 until 1955, then moved to Citra. Pictured here in 1892 is a steamboat taking on wood as fuel at the Eureka landing. The section passing by Eureka was the narrowest part of the Oklawaha River, Cypress Gate, and it determined the maximum width of the steamboats constructed especially for that river. Near Eureka, a large hydroelectric dam and power plant was planned during the 1920s, but the advent of the Great Depression killed the project before construction began. In the 1970s, federal termination of the Cross Florida Barge Canal project and the proposed recreational facility in Eureka killed the town’s chances of making a comeback. 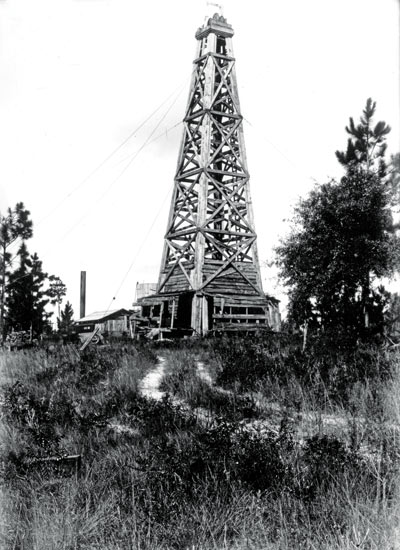 This town was located along US 27 at the intersection with CR 464B in western Marion County and was connected to Ocala by a pony express mail route in the 1880s. Its 1895 population was only 21. Nearby was this oil derrick photographed in 1928, belonging to the Flesher Petroleum Company. 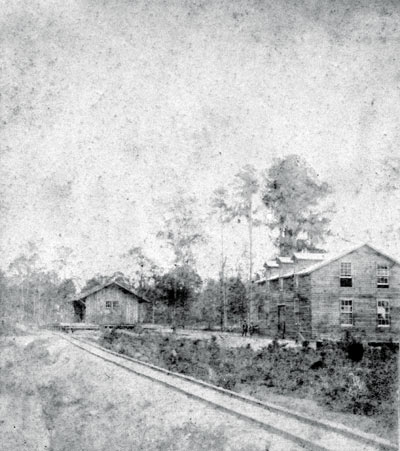 Founded in 1863 and believed to have been named for an early settler, L. Boardman, this town was served by the railroad shown in this 1880s photo. After the 1894-95 freeze, it had a population of only 15. The post office was open from 1882 until 1947, when it moved south on US 441 to McIntosh, the town that shared a cemetery with Boardman. 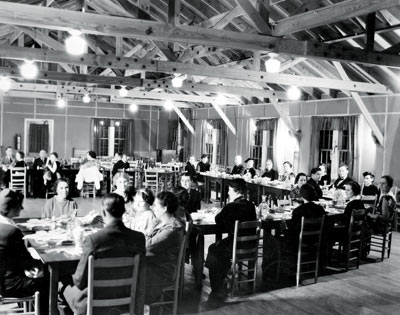 In 1935, a new settlement was established along US 301/441, named Camp Roosevelt after the then-president. A post office opened that year to serve crews from the Army Corps of Engineers who arrived to construct the Cross Florida Barge Canal. After that project was canceled, Camp Roosevelt was operated by the University of Florida and the Works Progress Administration for adult education classes. In 1938, the National Youth Administration used it as a girls’ resident camp, and in 1943 it passed back to the Corps of Engineers. Years later, it ceased to be a separate community, and its remaining buildings were absorbed into an Ocala neighborhood. 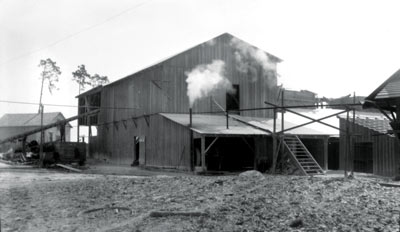 The town of Zuber was located along CR 25A between Ocala and Reddick, and was named for a local family. Zuber had its own post office for only 10 years, from 1907 until 1917, when mail service shifted to Kendrick. Shown here in 1913 is the Florida Lime Company Plant Number 3 in Zuber. 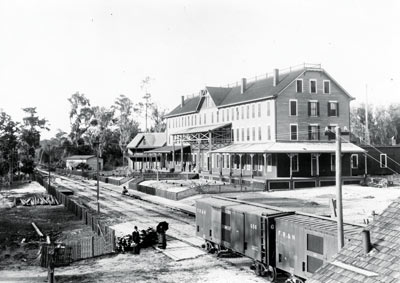 The town of Silver Springs was named after the state’s largest spring, first reported by Colonel Gad Humphreys in 1825. It provides crystal-clear water at the head of the Silver River, east of the intersection of SR 40 and NE 55th Avenue east of Ocala. The community grew up around the spring in central Marion County, later the site of amusement parks. Silver Springs opened its first post office in 1852 when it was a stage stop along the route from Palatka to Tampa. The post office closed in 1867, reopened in 1872, and closed for good in 1916. Shown in this photo from around 1887 are the Silver Springs Hotel and the tracks and cars of the Florida Railway and Navigation Company. 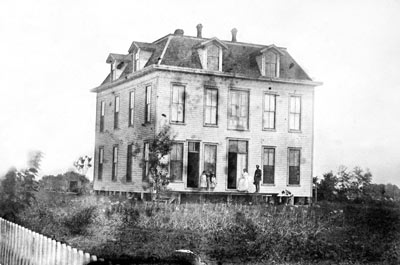 Now in the middle of the Ocala National Forest, Kerr City, named for Robert B. Kerr, was founded in 1884 by George Smiley on the site of a Civil War cotton plantation. In this 1885 photo is the three-story Kerr House hotel, built by Junis Terry. The Big Freeze of 1894-95 caused most of the 100-resident town to be abandoned, but it was later reoccupied. The hotel burned down in 1907, believed to be the victim of arson. The post office closed in 1941. Many of the old buildings have been preserved for tours, including a 1925 gas station, the post office, and several homes. 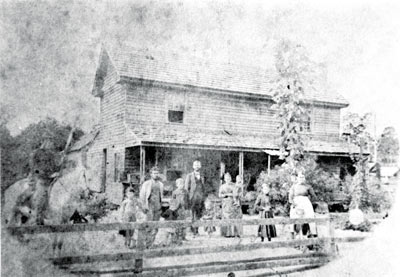 By 1876, the settlement of Moss Bluff had a post office, a pair of stores, and the Waterman and Company steam-powered sawmill. The settlement was connected to the main line of the Oklawaha Valley Railroad by a spur logging line of the Rentz Lumber Company, which connected at Silver Springs to the west. A portion of that right-of-way can still be seen a little south of the CR 464C bridge crossing the Oklawaha River northeast into Moss Bluff. The final Moss Bluff Post Office closed in 1932. Pictured here around 1898 is the Martin family in front of their Moss Bluff home. 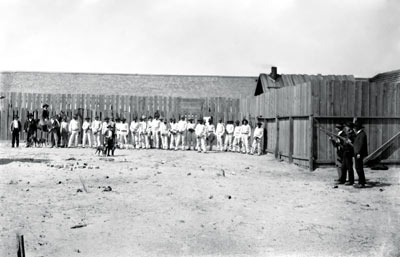 A little north of Dunnellon, this town was first settled by the 1850s with a sister town, Juliette. Some believe that a boy lived in one town and a girl in the other, their lives ending tragically because their families were enemies, but that is likely just a local romantic legend. A post office opened in Romeo in 1888, closed in 1893, reopened in 1894, and then mail service was shifted to Ocala in 1955. The one remaining store in the area was built long after the town’s boomtown years. Shown here in the early 1900s is the Marion County Prison in Romeo. The town was located along the railroad track paralleling US 41, a little north of CR 328. 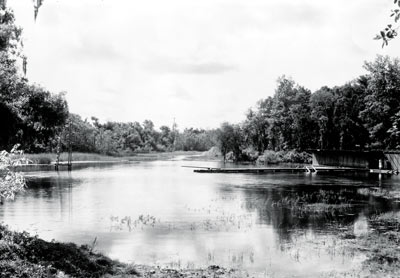 During the 1850s, Captain Samuel Agnew cleared land around Blue Springs, planted sea island cotton, and established the settlement of Juliette. The town incorporated in 1883 and had a hotel, post office, sawmill, three general stores, and a railroad depot. Phosphate mining and farming were its major industries. The town began to fade away in the 1920s, and the springs became a popular tourist attraction known as Rainbow Springs, now a state park. Blue Springs is shown here in 1931. 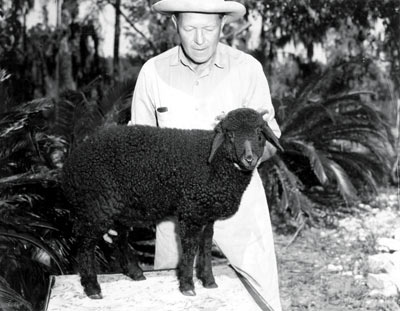 Located just west of Interstate 75 at the intersection of CR 225 and CR 318, Irvine is a small rural community located 1.5 miles north of the Fort Drane site, built in 1835. Its post office, named for local landowner Dr. O. B. Irvine, opened in 1871 and closed the following year, reopened in 1875 and closed in 1876, and reopened again in 1896 and closed after 2000. Shown here in 1946 on his Irvine ranch is Bill Davis with a three-month-old Karakul sheep named Abdul. 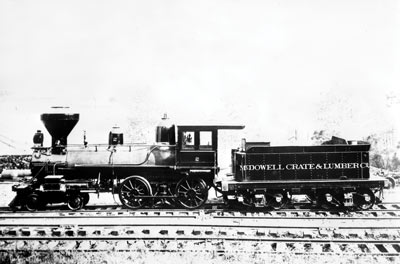 The town of Oak was located along SR 200 in the northern part of today’s Ocala. This 1910 photo shows engine No. 2 of the McDowell Crate and Lumber Company while it was parked in Oak. The town had its own post office from 1904 until 1936, when the Ocala Post Office took over mail service for the area.

So What Is A Ghost Town?

No, not some Halloween theme park or Wild West frontier, a true ghost town must have/had: