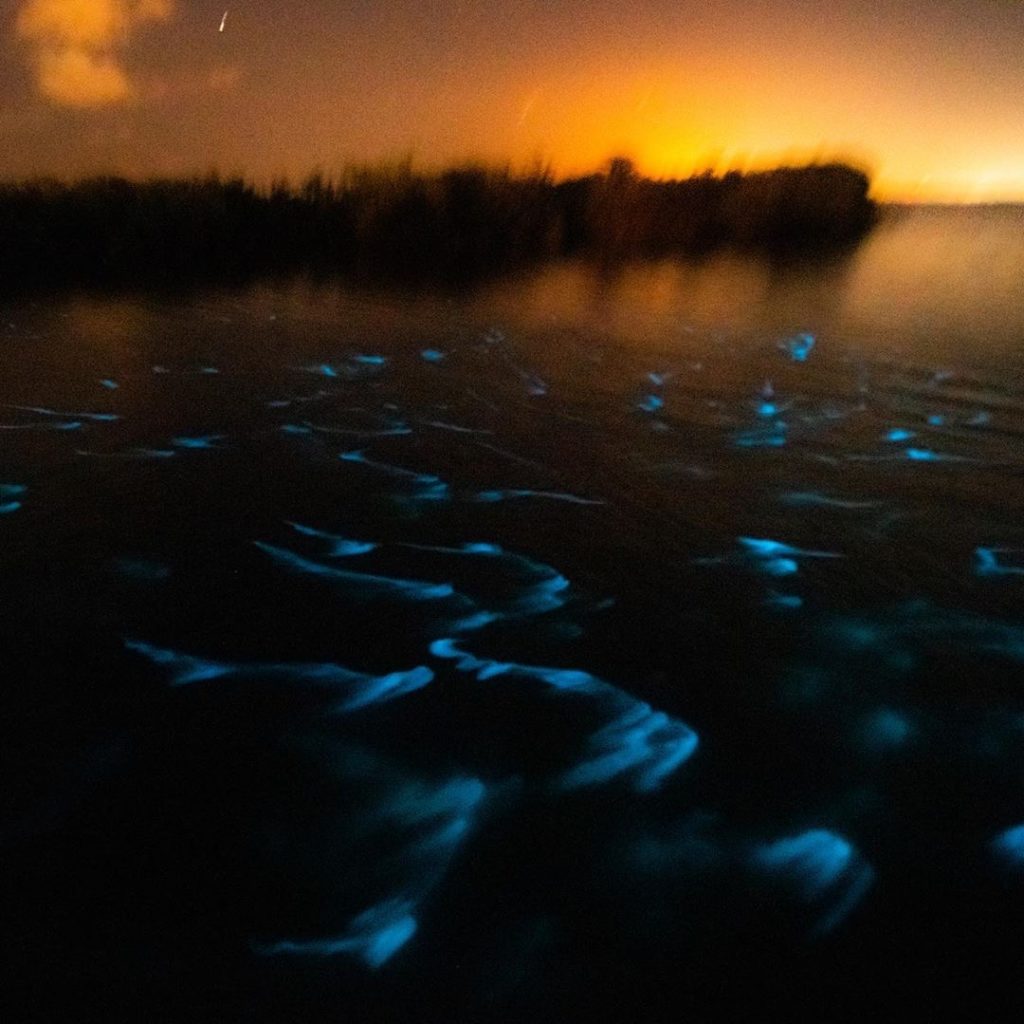 A bioluminescence kayak tour in the Indian River Lagoon can be an illuminating experience.

Just a couple of hours from Ocala, in Brevard County, visitors can watch as rockets hurl humans and satellites into outer space or board a cruise ship bound for an exotic port of call. They can learn to surf or reel in catches in the Atlantic Ocean, see alligators up close on airboat tours in the St. Johns River and birdwatch in protected sanctuaries. But one of the major draws on Florida’s Space Coast is an activity that involves some of the tiniest–yet flashiest–organisms on the planet.

Taking a nighttime bioluminescence kayak tour in the Indian River Lagoon, made up of the Indian and Banana rivers and Mosquito Lagoon, which runs from New Smyrna Beach through Titusville and Melbourne, gives you a glimpse into a world that shimmers and shines. The lagoon is full of comb jellies, which are ancient organisms that have inhabited the world’s seas for more than 500 million years. The gelatinous animals are named for plates of cilia, or combs, that form eight rows in their body. The combs propel the organism through the water and can produce a rainbow effect. The lagoon, which is one of the most biologically diverse estuaries in North America, also is home to phytoplankton, or microalgae, which are similar to terrestrial plants as they contain chlorophyll and require sunlight. It is these two living things that create the “magic” of bioluminescence.

Recent tour guest Mary Racaniello, formerly of New York, says she moved to the area two years ago and has seen instances of bioluminescence while boating in the area’s massive Indian River and Banana River channels, which are part of the lagoon.

“I’ve seen it from a big boat,” she offers, “but I’ve never been on a kayak actually looking right down intimately into the water. So, I’m excited for that.”

Fin Expeditions offers bioluminescence kayak tours from a launch site at the Cocoa Beach Country Club, which is on the Banana River. Tour guide Jessica McNeil says the comb jellies are in the lagoon waters year-round but the phytoplankton prefers a warm environment and will die off in the winter. That’s why the bioluminescence tours are seasonal.

“It can begin as early as March, but the full peak experience is a summer experience,” McNeil explains. “We start getting our peak light bio the end of May, beginning of June, and it just gets brighter and brighter. The top weeks are the last two in July, first two in August, and then the phytoplankton will slowly die off into maybe late October.”

“Just to put it into perspective,” McNeil outlines for Racaniello and other guests, “what you’re seeing out there, there have to be at least about a million of the phytoplankton in a liter of water for them to show up with any significance. This is one of the five or six places in the entire world where it shows up like this with any regularity. And it changes from night to night. We never know what we’ll find until we get out there.”

McNeil explains to tour guests that the comb jellies and phytoplankton “both light up to scare away any fish that wants to eat them or to call in a bigger predator that would eat the fish that are going to eat them, like a dolphin, for instance.

“The comb jellies are not jellyfish,” she adds. “They do not sting. You can catch them and hold them.”

McNeil says their tour groups are limited to 10 or 12 guests for a more intimate experience, which she describes as “very relaxing, kind of chill.”

“We don’t have to go far, everything we want is right here,” she offers with a sweep of her arm around a steadily darkening cove at the launch site. “We get out there and start seeing this magic in the water every time you stroke your paddle, every time a fish swims below you.” 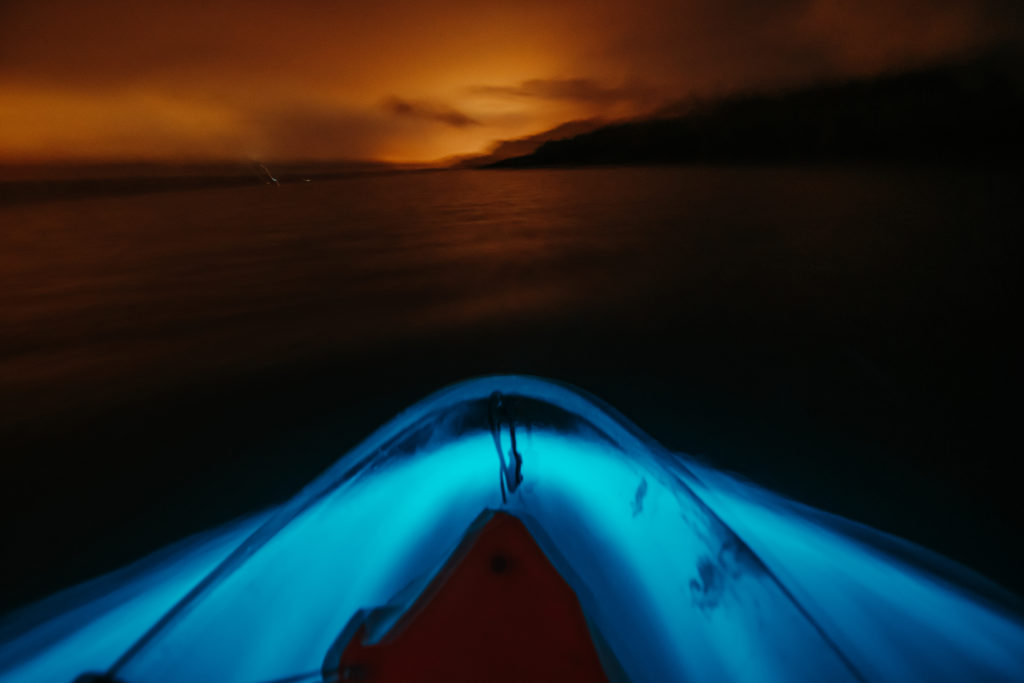 As the guests paddle away from the launch area under moonlight, she guides them along a shoreline studded with mangroves. Any dip of a paddle in the water instantly causes a light show as millions of phytoplankton react to the motion. Slicing one’s paddle sideways through the water creates a dazzling light show. Merely trailing a hand or foot in the water creates a ghostly aura that is both eerie and fun.

Using a dip net, a kayaker can easily bring up glowing blobs of comb jellies. Holding one of the jellies in your hand is like trying to juggle Jell-O that lights up at your touch.

As McNeil brings the tour around one corner of the waterway, she announces that she expects to find “Mullet City.” In the shallow areas of the lagoon, mullet gather to feed and spawn. At night, as they travel through the phytoplankton, their bodies are illuminated and they appear to be flashing as they zoom beneath your kayak or leap into the air.

McNeil urges her charges to listen for the sounds of dolphins and manatees, and to watch for fast moving stingrays, all of which will be glowing with bioluminescence.

To learn more, go to finexpeditions.com