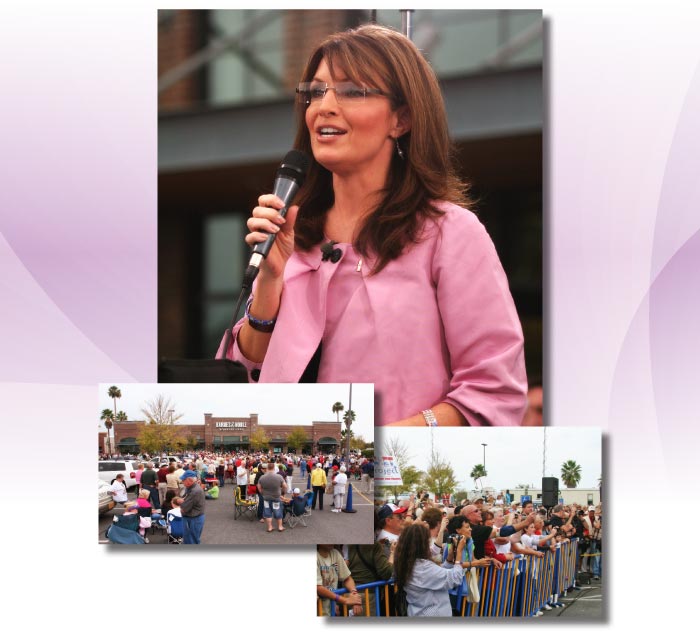 They came early and they came in droves. They came to see Sarah Palin. More than a thousand en masse, many clutching multiple copies of her best-selling memoir, Going Rogue: An American Life, stood for hours in one massive line that snaked back and forth across the Lake Sumter Landing Barnes & Noble parking lot in The Villages. Some, like Kevin Kerbow and his wife, April, of Beverly Hills, camped out overnight in front of the store, proudly displaying their green wristbands. The bands guaranteed they would meet, possibly shake hands with, and have former Alaska governor and 2008 GOP vice presidential candidate autograph a pre-purchased copy of her book.

“We’ve been here since 2pm yesterday, 17 hours and counting,” quipped Kevin. “Only seven more to go.”

By late morning, store employees had handed out nearly 500 of the coveted wristbands. There would be no more. Disappointed fans started drifting away. By noon, a line of television satellite trucks had formed along the northeast side of the parking lot and news helicopters hovered overhead. Dave Vitallo worked the crowd, hawking his “Palin 2012” bumper stickers. Another man tried to sell cartoonish paintings depicting President Obama and House Speaker Nancy Pelosi as communists. There was also a sprinkling of handmade signs and banners: “We Love Sarah” read one. “Sarah, Help Us Escape Socialism” hollered another. Except for the occasional “We want Sarah” cheer, fans quietly stood or sat in canvas folding chairs reading Palin’s book, discussing politics, or just visiting with their impromptu neighbors. 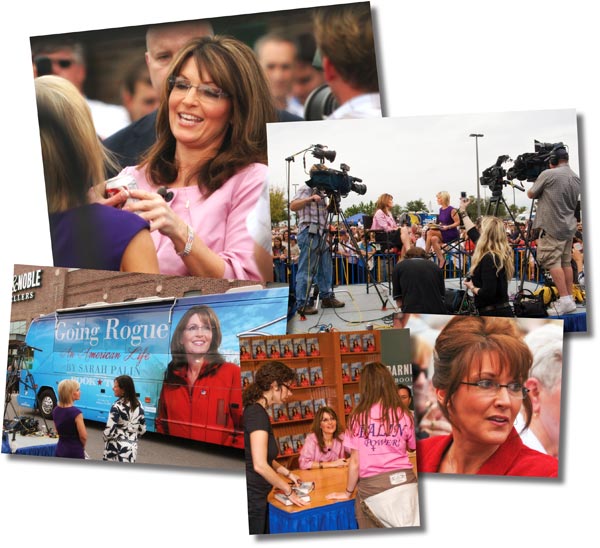 At 2:30pm Palin’s massive blue bus rumbled into view. The crowd roared. But it was another 10 minutes before it finally pulled up in front of the store. While they waited, Palin look-alike Kris Hall of The Villages delighted fans by posing for pictures. When the real Sarah emerged from behind the bus, trailed by daughter Piper and son Trig, she briefly worked the crowd before mounting a stage for a TV interview with FOX & Friends morning host Gretchen Carlson.

“Thank you so much,” Palin told her supporters. “We had such a great time here on the campaign trail. We said if we ever come back to Florida we have to make sure we stop here.” 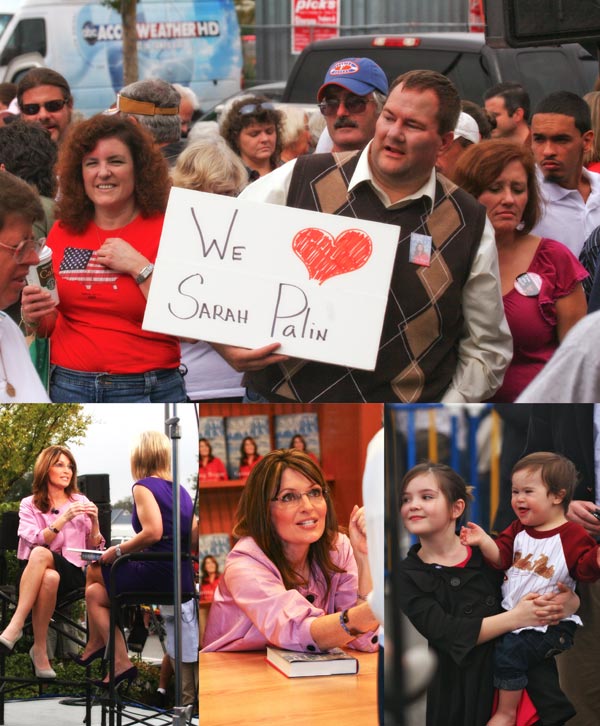 Palin fans anxiously endured another 20-minute wait before the FOX interview, hampered at first by technical difficulties, was completed. Then they streamed into Barnes & Noble in small groups, past the rows of bookshelves to a special area flanked by blue curtains at the rear of the store. There, out of earshot of the news media, Palin signed book after book as they were slid in front of her, assembly-line style.

Occasionally, she would reach out and shake a hand, always careful to make eye contact, smile, ask a question, or acknowledge a compliment. It was pure love. For Palin’s fans, it was the first real opportunity to see their political hero up close without the wall of security that surrounded her during the presidential campaign. For Palin, it was a chance to be more relaxed, more herself, more engaged with the public—certainly more reachable.